"I hope the younger generations know the real passion, and celebration of life that is the Blues, it’s not a downer thing."

Jo Burke, Washboard Jo, a life long music fan and Kansas City native, was raised in Iowa. When she was in High School she joined The Nee Hi's, an 80 piece, all female drum and bugle corps from Clinton Iowa, anchoring the percussion line and marching in hundreds of parades and competitions. Her percussion instructor Ramiro Martinez became a major, life long influence in Jo's life. Her rhythm and love for music, including Blues, Funk and Zydeco styles developed at an early age but it wasn't until the fall of 2000,  that this dedication during her youth, including countless hours spent learning rudimentary skills, paid off.    Photo by Dusti Cunningham 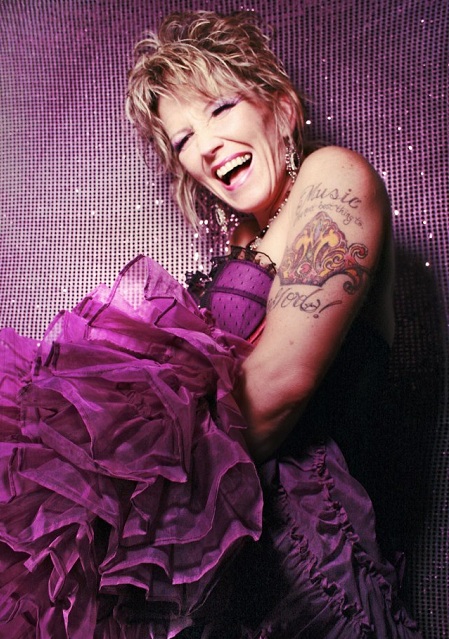 While attending a concert at Kansas City's legendary Grand Emporium, Jo Burke was chosen from the audience and given what seemed to her at the time, a silly instrument. A washboard was placed upon her chest. She hasn't put it down since, as mild mannered Jo Burke transformed into Washboard Jo. She has captivated audiences with her endless energy and versatile playing styles, bridging genres like Blues, Jazz, Funk, Zydeco, Gospel, Bluegrass, Reggae, Rock and Roll, and R&B. Now Jo Burke is a full percussionist, songwriter, poet, singer, and overall entertainer. She visual as well as musical. During her shows she can be seen in the audience, sharing her washboard as someone shared a washboard with her back in the year 2000. She can be seen sharing stages with the top national and regional bands in the USA and the world, along with her own shows with Washboard Jo and the Soapsuds and Poodle and the Pitbulls.

Eliminating the scourge of domestic violence has become a mission for Ms. Burke. A New Dawn is Jo's efforts to educate and illuminate women, children and society about this condition that  destroys the lives of perpetrators and victims alike. Jo always wants to thank and show unbound appreciation to all of you for your love, support and interest in her passions, music and helping people surviving domestic violence. Her wish is that all of you enjoy her music as much as she enjoys sharing it with you. As Jo says, "Music is the next best thing to God."

What do you learn about yourself from the Zydeco culture and what does the Zydeco mean to you?

Zydeco taught me to be free, to dance, and let the music guide me.

Historically, or in my unacademic historical imagination, Zydeco represents an era where several nationalities got together, like gumbo, in a geographic location and instead of fighting they realized they could, they had to coexist, to dance, play music, and celebrate. The soundtrack became Zydeco Music.

How do you describe Washboard Jo’s sound and progress?

My sound started when I was a young teenager marching in an all girl drum and bugle corp, joining the percussion line and learning as many rudiments as possible. I put it down, stopped playing at seventeen. 20+ years later I was randomly chosen out of the audience, almost like an act of divine guidance, a washboard was placed on my chest and my career was reignited. I started playing as much as I could and haven’t put it down since. Now I get to play with national and international bands, have endorsement requests and you’re asking me questions about my music philosophy. Pretty cool eh? 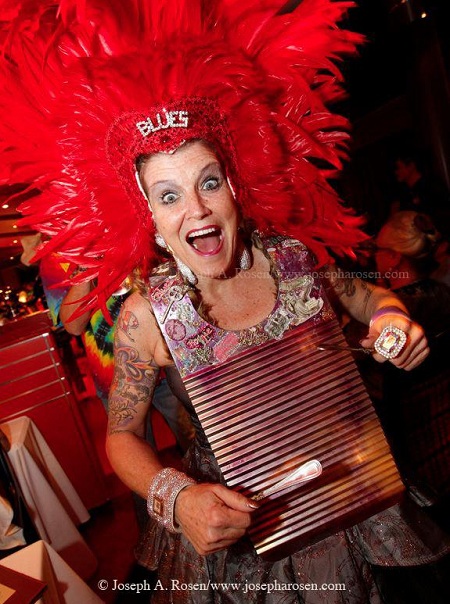 Share this love of music, and love of life with as many people as possible, or that one person in the audience.

"In my opinion it is a circle that begins and ends with the blues while all those other names are shades and styles like colors of the rainbow." (Photo by Joseph A. Rosen)

So many, more all the time, my life is blessed. Having dinner with Bobby Blue Bland and his family was amazing.

As far as advice, many people tell me to never give up on my dream...so I will tell you that.

Are there any memories from jams, gigs and recording time which you’d like to share with us?

I wrote a song with Magic Slim. He got a drink, and we laughed so hard and so much we never got around to recording it. Unfortunately, I never made it back to Lincoln Nebraska to record the song before he passed. One line goes, “Stop your search, no more looking for him; I’ve come to your rescue, I’m Magic Slim!”

I miss the “feelness” and realness of the music, it seems now a lot of music lacks the real emotion of the blues.

I hope the younger generations know the real passion, and celebration of life that is the Blues, it’s not a downer thing.

I have no fears; I think The Blues will exist forever. It’s so fundamental to world popular music and to humanity. 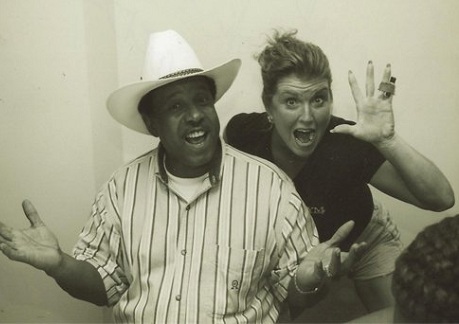 Lonnie Brooks (photo) sported my Rhinestone Washboard while watching Pinetop on the Legendary Blues Cruise. He looked good that night!

I was asked to put together a tour of Kansas City and a jam session for folks from Minnesota who turned out to include Guitar Shorty. They said I was a great guide and a better washboard player, how about continuing the tour. I had minutes to pack for a 10 day tour and being a woman, this is no small feat. In Clarksdale Mississippi we met a gentleman suffering from late stage cancer. He thought this was his last vacation. His wife and I stayed in touch. Several months later she mentioned a benefit they were having for her husband. Her husband said, “If Washboard Jo and Guitar Shorty could play at my benefit I could die the next day and be happy.” I contacted Shorty who is so cool, we made this man’s dream come true, playing at the benefit. Good news update: this man is still with us, was approved to take a new experimental drug and they are returning to Clarksdale this summer.

Pinetop: Getting him water on the blues cruise, then he insisted on a photo together. That’s before I realized I could actually play.

Magic Slim: My first time in Lincoln Nebraska to play I met an elderly man and he asked to go outside and smoke a cigarette. He told me Warner Brothers Records wanted him to sign a 10 year contract. He told them no, he didn’t know if he’d be alive in 10 years. We laughed so I asked who he was and he said, “I’m Magic Slim and what are you doing here young lady?” I told him I was there to play and do an interview with KZUM. He asked what I played and when I said washboard he shrugged his shoulders, laughed and walked away. Later he was in front of the stage when I was playing with Nick Schnebelen of TUF, with his mouth open and that smile in his eyes. After the performance he said, “I’ve seen them all and none hold a candle to this little lady!” He asked me to join him the next weekend at the Zoo Bar in Lincoln. 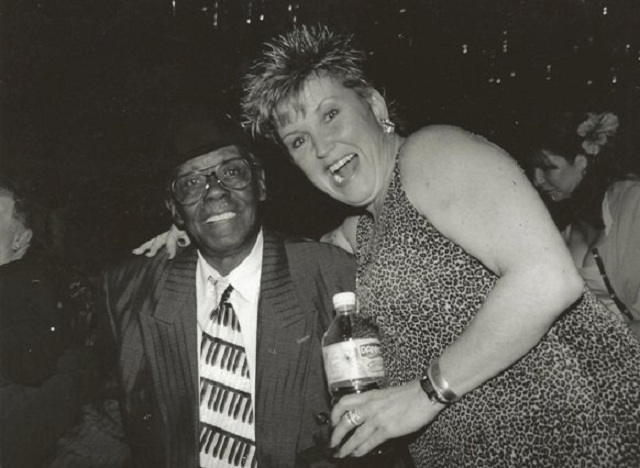 "Share this love of music, and love of life with as many people as possible, or that one person in the audience." (Photo: Washboard Jo & Pinetop Perkins)

What are the lines that connect the Blues, Reggae with Soul, Rock n’ Roll and continue to Jazz and Zydeco?

In my opinion it is a circle that begins and ends with the blues while all those other names are shades and styles like colors of the rainbow.

Why the sound of Washboard is connected to the Cajun/Zydeco culture? What are the secrets of Washboard?

Washboards were readily found in the society and culture for cleaning and washing, you know, their original purpose, but the sound and rhythms of scratching and tapping washboards worked naturally with the cajun rhythms...or maybe we have Cajun rhythms because they were heard by the children as parents used the washboard. What came first, the chicken or the washboard?

Washboards are also loud, needing no amplification so they worked great with the acoustics of the times.

I want to expose and refute the idea is that the washboard is exclusively for zydeco/cajun/blues music. This is a legitimate percussion instrument, viable for funk, jazz, reggae, Gospel, Rock and Roll or any popular music.

As far as secrets, one must love to play their chest, and of course, washboards sound better with rhinestones on them. 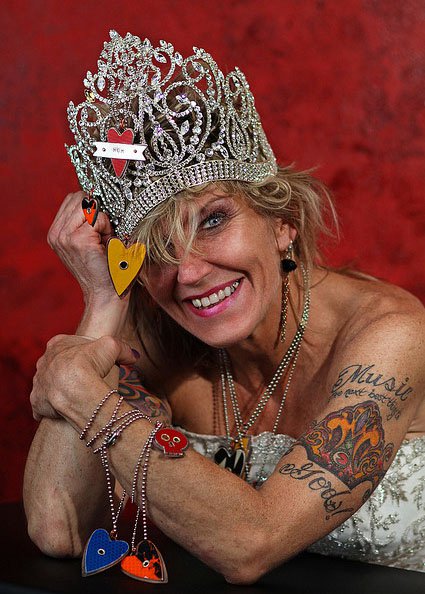 I’m not sure it’s a man’s world in the blues or in music anymore. The number of women; influential, powerful women, is growing by leaps and bounds.

"Zydeco taught me to be free, to dance, and let the music guide me." Photo by Dusti Cunningham

Eliminate the hate and hostility in the music listened to by younger people today.

What has made you laugh lately and what touched (emotionally) you from the Zydeco circuit?

Dwayne Dopsie & The Zydeco Hellraisers's blew me away. I think he’s a third generation player which is awesome. It’s great to see young new artists, take up this form of music and make it their own.

I’d go back to the big band, bebop era to hang with Charlie Parker, then head south and see Clifton Chenier in his prime playing a roadhouse where they’d let a little white girl sneak in.

You are also known of your work with several charitable and social projects. Would you tell a little bit about that? What was the relation between music and activism?

Being a survivor of domestic violence myself, I feel the need to bring awareness to men, women and children. Recognizing the signs of generational disaster is so important so that it doesn’t continue. The chain can and must be broken. I dedicated a page on my website, to this issue with a poem I wrote called “New Dawn.” I also invite anyone to communicate with me, through the site about this or anything they may want to communicate about.

I also participate in benefits and fund raisers wherever, whenever possible. I think it’s a musician’s duty. There’s that saying that with great power and blessing comes great responsibility. We get so much joy from doing this and one reason is that people are in the audience enjoying us. We give back first by giving good performances but also by contributing to our society when its needed and every benefit needs good music. If it’s a cause I can support I do what I can. It’s partly selfish, these things are usually a blast, it’s certainly no burden ... to play music? I can’t wait for the next show... 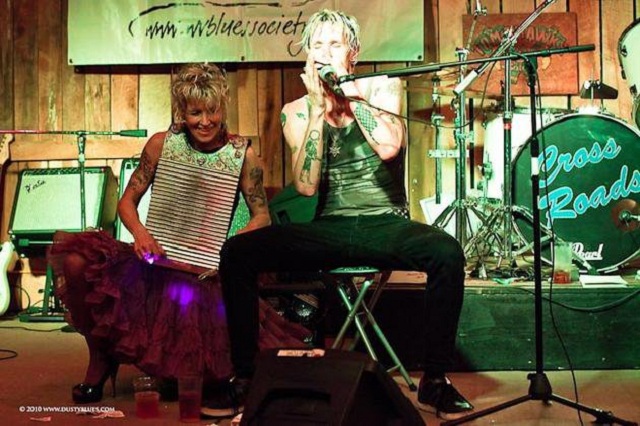