"The Blues was a sound that attracted me naturally. Never in my life have I felt music so strong and powerful."

Moltas Ahs is an exciting young player from Sweden, who has been a favorite burning it up at the Blues Jam in at Stampen club. Blues, roots, rock, jazz, soul, folk...Everything is in the mix! When Moltas was 10 years old he bought his first guitar. It was a cheap strat copy with a really bad amplifier including. This life changing choice came suddenly. Nobody really knew what caused it, it just felt right. Because nobody in his family had played an instrument before. This choice came from somewhere else. Moltas school where at the time offering free guitar lessons from the music teacher. After going there for the third he stopped going there and started to noodle on the guitar by himself playing in his teenage bedroom. And thats where Moltas guitar playing would stay and develop, for almost six years.    Photo by Lennart Brorsson 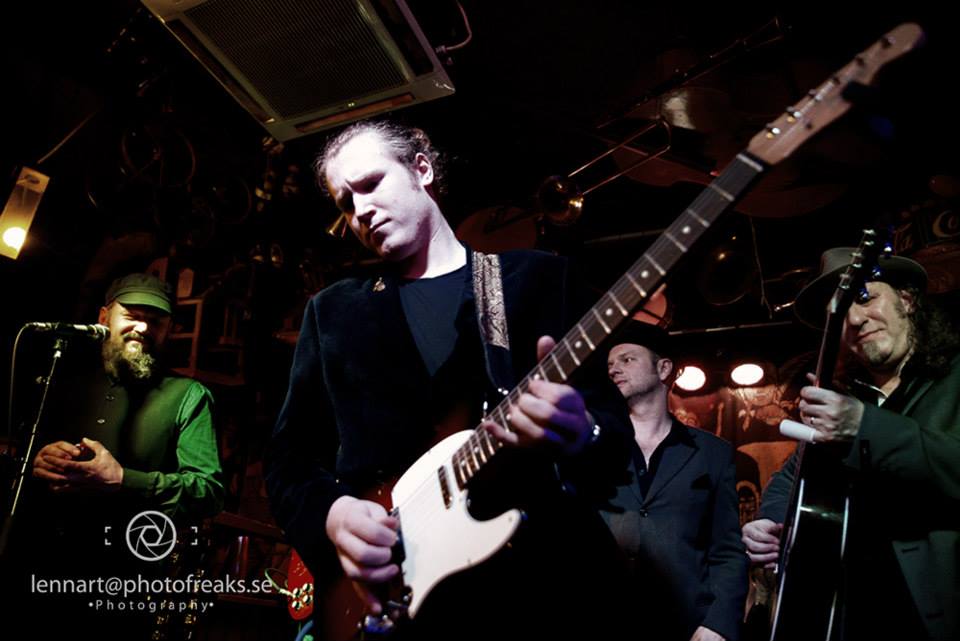 Listening to rock music started at the same time. Trying to play along to AC/DC records watching videos and tried to do everything Angus Young did. Many hours where spent on just playing on that start copy. His first real Stratocaster guitar was bought after hearing Mark Knopfler playing the ending solo in ”Sultans of Swing”. Since then hes ben stuck with mostly fender guitars. Discovering more music via Youtube, Spotify etc, allowed Moltas to expand. Bands like Queen, Iron Maiden, Green Day and Metallica where a big inspiration. Moltas first introduction to the blues was when hearing Stevie Ray Vaughn’s ”Pride and joy”. Moltas Later on discovered B.B King, Joe Bonamassa and other guitar virtuosos like Eric Johnsson. The blues helped to make him see music as a language, a way to talk.

When I first heard Stevie Ray Vaughan's Pride And Joy I was immediately hooked. I sat for weeks with just that track, trying to learn the exact licks that Stevie played. And from there on it just spread. I started discovering the players that Stevie were inspired by. The Blues was a sound that attracted me naturally. Never in my life have I felt music so strong and powerful.

How do you describe Moltas Åhs sound and songbook? What characterize your music philosophy?

I’ve been playing for almost 7 years now and I'm still trying to develop my own sound. And I hope that I will never stop looking for new exciting things. A few months ago I rediscovered the amazing Eric Johnson and I incorporated a lot of his fast pentatonic into my own playing. At first it sounded clear and exact but as I kept on playing it got sloppier. And it sounded more rough, and I think that’s more how I would define my sound. But it’s tough to realize that I may not be the super perfectionist like Eric Johnson is.

When I play blues it’s often improvised. I have realized that I tend to play better if I just concentrate to bring out what I'm hearing in my head. Trying to see the guitar as a tool, a pencil to get out the things that I hear in my head. 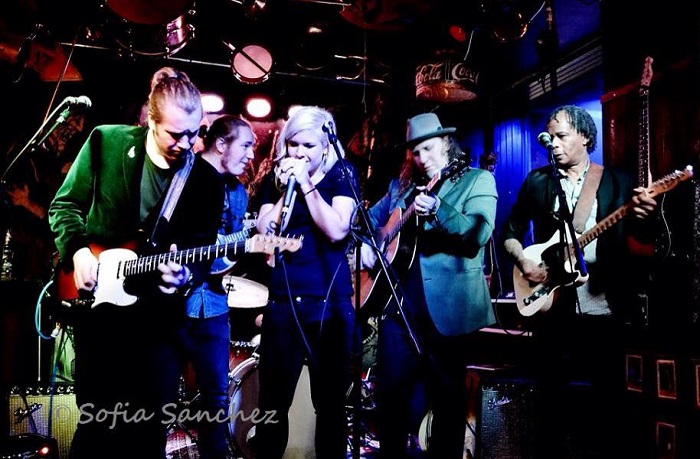 "I hope and believe that the blues has a bright future, and I hope that my generation of musicians will help the blues to expand even more." (Moltas Ahs with Brian Kramer, Fredrik Karlsson, Lisa Davidsson and Chuck Anthony / Photo by Sofia Sanchez)

Sometimes when I pick up the guitar I feel absolutely nothing, I feel like my fingers are weak and I'm not connecting with the instrument at all. And I have to admit I feel that sometimes. It’s hard to accept that sometimes you just don't feel it. An advice that my older cousin told me was ”sometimes when you start doubting on this whole thing that you built up for yourself, you can buy gear, try playing a totally different genre or just restringing your instrument to maintain the motivation and inspiration you know is there somewhere deep within you.”

When I was 10 I bought my first guitar. And my mother told me there was this blues jam at a club in Stockholm, Sweden called Stampen. I had long hair and listened only to Iron Maiden. But I went there. And I didn't liked it at all, I didn't understand what it was. Last year when I was sixteen I went back to “Brian Kramers International Blues Jam” and I got the chance to stand on stage and play with professional musicians. And from there on I started to go there regularly. Stampens blues jam have given me the possibility to meet and play with such a variety of musicians. Brian Kramer recently gave me the opportunity to set up my first show. And when he asked me if I could set up a show with 90 minutes of material, I had no idea if I could pull it off. I had no band, no own written songs and with just a month to prepare. But I said yes. Brian told me “It’s a good challenge…”, and yes it was challenging but we succeed after a lot of hard work. And I also got help and support from all the amazing people around me.

I realized that I tend to draw myself to people who support what I do. It eases if my family and friends understands how much music means to me and how much I'm ready to give for it.

Last Easter we went to New York on a family trip. By coincidence B.B King was in town, we were stunned. We got the tickets and we took a cab far out in the suburbs were the concert hall was. We were all dressed up and waited for the show to start. His band started playing but the audience was waiting for the king. When he came in people started to run up to the stage and so did I. And suddenly BB reached out to shake my hand. It was a surreal experience that I will never forget. I think that I will wake up when I'm 40 and realize what happened. 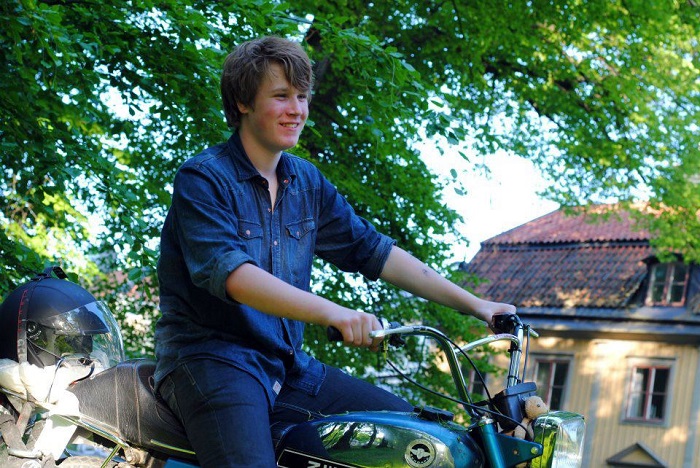 "When I play blues it’s often improvised. I have realized that I tend to play better if I just concentrate to bring out what I'm hearing in my head. Trying to see the guitar as a tool, a pencil to get out the things that I hear in my head."

I’ve not been around for that long (I'm only 17 years old). I hope and believe that the blues has a bright future, and I hope that my generation of musicians will help the blues to expand even more.

That all the fighting great musicians in the world would really get a fair amount credit for their work. There are way to many Artist/Bands that doesn’t get half the credit they deserve.

Make an account of the case of the blues in Sweden. Which is the most interesting period in local blues scene?

I’m only used to playing at my school and Stampen so my opinions on that aren't clear.

What are the lines that connect the legacy of Blues from United States and UK to Sweden?

This interview is the first international experience I’ve done so far. 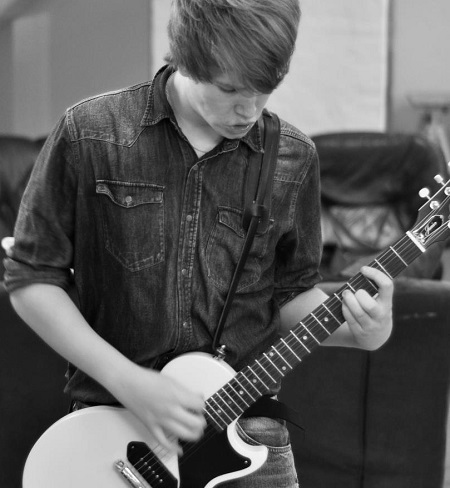 I was invited to The Blues Hall Of Fame Introduction at Stampen as a special guest. Brian Kramer band was one of the inductees. And it was such a surreal experience to be one of three special guests to play with them. The other two guests was Lisa Lystam and Fredrik Karlsson from Lisa Lystam Family Band. And to be on stage with both of them and Brian’s band was such an honor. Brian and his band got their diplomas afterwards, and it really touched me. To see these hard working musicians get credit for their amazing work.

Wembley Stadium, June 1986 to see Queen on the Magic Tour. To just wittiness Freddy Mercury’s stage presence live and not just in front of my computer like I've done a hundred times.