According to PRWeb, Paul’s family and friends will gather at Prairie Home Cemetery in Waukesha, Wisconsin at 10:30am on Saturday, September 10, 2011 to unveil the new memorial – a 500 square foot granite monument which will feature the star’s biography etched into it’s slabs. 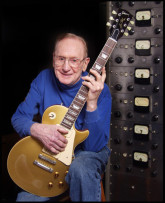 “The memorial shares Les’ legacy with all who visit the site,” said Michael Braunstein, Executive Director of the Les Paul Foundation. “We are very pleased with how everything looks. Les chose to be in Waukesha. We know the people of his hometown will cherish this site as Les Paul cherished his hometown.”

Born Lester William Polsfuss, Les Paul is best known for developing the first solid-body electric guitar, which many claim made the sound of rock and roll possible.

Because of his brilliant innovative talents and recording techniques, Paul, nicknamed The Wizard of Waukesha, is one of a handful of artists with a permanent, stand-alone exhibit in the Rock and Roll Hall of Fame.