"Blues sunk into my heart and soul. Just as I had heard it the first time, Blues is the mirror of life, sometimes sweet, sometimes joyful at times desperate."

Hubert Leroy 'Herbie' Goins starts singing in the Baptist Church of his town in Florida when he is a little boy, with his mother, a Gospel singer. He is still a teenager when he forms his first Blues Group, The Teen Kings, and he has his first successes in Florida and in other south states. Some years later he moves to New York, and he starts his real musical formation travelling all over the States and participating in several occasions at concerts of bluesmen like B.B. King, Bobby Bland and Sam Cook. After the military service in Germany, Herbie is engaged by the great English Orchestra of Eric Delayne and, with them, he moves to England. Then he leaves Eric Delayne to join the Chris Barber Jazz Orchestra. But the call of the Blues is too strong for him, and so he becomes the official singer of the Blues Incorporated of Alexis Korner, considered the father of the White Blues, who gets together those who will become the most interesting artists of the English musical scene. Herbie sings with musicians such as Dick Heckstall Smith, Jack Bruce, Ginger Backer, Danny Thompson, Phil Seaman, and many others. Unforgettable are the albums recorded in this period as Live at the Cavern and Red Hot from Alexis. 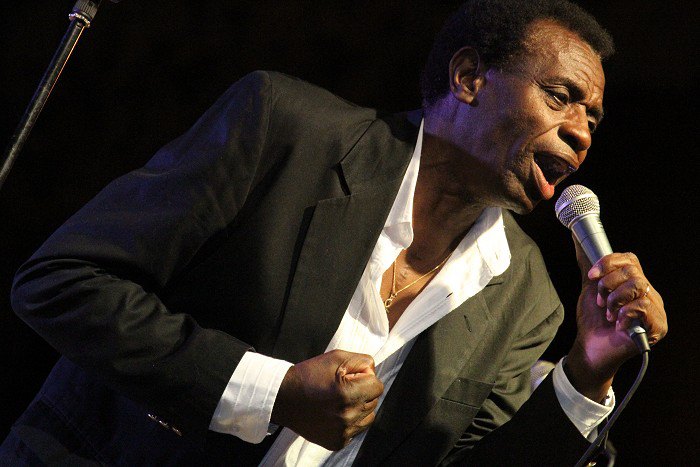 After some years with Alexis Korner Herbie forms his own group, The Nightimers, and orients himself mostly towards Rhythm and Blues. Once again he has in his band great talent musicians like John Mc Laughlin at the guitar, just to tell one name. It is an immediate success. Herbie becomes one of the favourite singers of the Mods, a movement really very important in England at that time. They follow him in all the historical London Clubs, such as Flamingo, Marquee, Sylibles. His song “Number One in Your Heart becomes Mods himn. EMI engages him and his records enter in the charts in most of the European countries and, after years, will become great demand for collectors of rare records. During this time, memorable are the jam sessions of Herbie with Otis Redding (in concert at the Scoth Club of London), with John Lee Hooker (in concert at the Norwick Jazz Club at Norwick), and with Jimi Hendrix, still unknown and present at the Blaises Club in London every Monday for the appointment  with Herbie’s concert.

Photos by Herbie Goins Archive / All rights are reserved

What did you learn about yourself from blues and what does blues mean for you?

Along time ago when I was about five or six, I was waiting for my parents that went shopping in town. I was sitting on the steps of a nearby house from which  I could hear some incredible music: I had never heard anything like it! My mother was a gospel singer, so we listened to Gospel music at home.

The notes that came out of that house were poignant, sometimes sweet, sometimes joyous, at other times desperate. I was a kid therefore I could not enter to clubs. So every time we went in town, after that first time, I sat on those steps to be able to listen to that music.

From then onwards, Blues sunk into my heart and soul. Just as I had heard it the first time, Blues is the mirror of life, sometimes sweet, sometimes joyful at times desperate. I lived all my life with Blues, I feel that it is my story, my way of being. "The R & B scene in America as well as the Blues one is more extensive and important than in Europe. Just take a trip to New Orleans and you will face with a multitude of young musicians, many of them are great."

How can you describe the sound of Herbie Goins and songbook? What characterizes your music philosophy?

I do not think I can describe my sound or my songs; I leave the judgment to those who listen to my music. I do not have my real musical philosophy: I do not think there is much to say about music, if and when you do it because it comes from your heart, and not just for money or success.

I think the turning point in my life was the decision not to go back in the USA after the military service in Germany. Infact, during my service in Germany, I had the opportunity to sing during the concerts of Eric Delayne Big Orchestra at the American Military Bases. Eric made me the offer to join the Orchestra in London, so, after my discharge, I left for London and of course my life took another direction.

The best moment of my career was perhaps forming "Herbie Goins and the Nightimers".

The worst moment was during a six month tour in Italy with the Nightimers: the bus we were traveling on was stolen with all our instruments and luggage. At that point the Band decided to dissolve, for the time being, but we never got together again as I decided to remain in Italy, and the others went back to England. 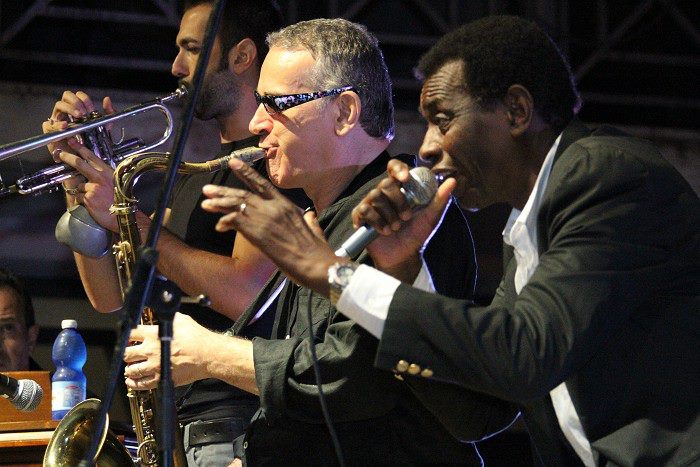 "Anyway, I was very happy, for example, at the last Rolling Stones’ concert, seeing that the time passed on their skin, but not in their spirit. Our generation of musicians, really great!"

Who were the people you met, that had a significant meaning for you? What was the best advice given to you?

Of course, in all these years I met a lot of persons that have been very important for me, both for my work and my life. Difficult to remember all of them.

First, when I was still in high school, I had the opportunity to sing with a young BB King, who really charged me up! I had a band with other students, The Teen Kings, and singing with BB King of course was great for me.

Then, in England, Alexis Korner, naturally, and Chris Barber, Keith Richard, all great friends just to name a few.

The best advice was from Alexis Korner:

Are there any memories from Chris Barber Alexis Korner and Otis Redding that you would like to share with us?

After some time with Eric Delaney's orchestra along with Elkie Brooks, I felt that I needed more satisfaction from music. Many other musicians were courting me and among them was Alexis Korner with his Blues Incorporated that from time to time asked me to join him. Singers like Cyril Davis, Long John Boldry and Ronnie Jones, had sang with the band. Therefore, I became the lead singer of the Blues Incorporated. It was quite another world:  with Eric, we played in theaters, in the ballrooms and in military bases, but with Alexis we played in pubs that meant different kind of money, but most of all a different and warm contact with people. I was really satisfied because I was singing Blues full time! 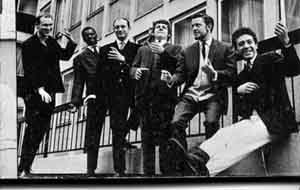 A lot of musicians, who later on would have made the history of British Blues, joined Blues Incorporated (photo) in the years, such as Eric Clapton, Graham Bond, Paul Jones, Phil Seaman and many many others. Later on Mick Jagger and Robert Plant (whom I met again some years ago in Buxton for Alexis Korner’ First Memorial Concert: he told me that as a young boy he was a great fan of mine and used to flee from home to come to my concerts. He still remembered the lyrics of all my songs!)

Well, I had the chance to sing with a great deal of English musicians from Jazz, Blues, and Pop. All of them great and full of enthusiasm!

At the same time, I was playing also with other musicians: many times with Chris Barber and his Traditional Jazz Orchestra, we gave many concerts for BBC radio.

After some years with Alexis Korner, I decided to join the Nightimers, founded by Mike Eve, saxophone player. The band was already quite famous in Britain at that time. When I joined them, the name of the Band changed to "Herbie Goins on the Nightimers". 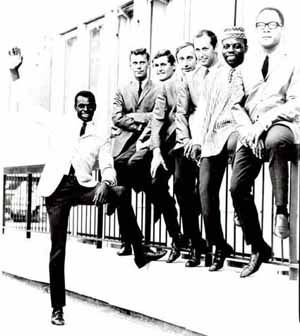 We had great musicians like John McLaughlin, Dave Moss, and Graham Bond to name a few. At that time musicians changed very often from group to group which was exciting because everyone created and was part of different kinds of music. The Nightimers (photo) mainly played "Rhythm and blues" and "Soul" and in a short time we became one the leading groups in Britain. We had many fans all over, most of them were "Mods", I was very glad to be one of their favorite singer. Also now, the younger generation of Mods still listen to my music and invite me at their reunion in the various countries.

We were touring in Germany, Spain, Italy and France and during that time I signed a contract for EMI (the producer, Norman Smith, later produced Pink Floyd). Our songs "Cruising” (written by Mc Laughlin) and "Number one in your heart" (the Mods favorite), together with others, reached the charts and where best sellers for quite some time.

The period spent with Nightimers was the most enthusiastic time of my career, which gave me many satisfactions, personally and professionally.

At that time, in London, I met and performed with many great of the music, for example Otis Redding: he was in tour in Britain and going from club to club, (as every musician did at that time); we met and played unforgettable jam sessions!

Then, Jimi Hendrix, who was still unknown then: he used to come at “Blaise’s" where we were playing every Monday and shyly stepped in to play. Our guitar player was quite “worried" on how Jimi treated the guitar!

So many great memories those days, really unforgettable and unrepeatable for music. 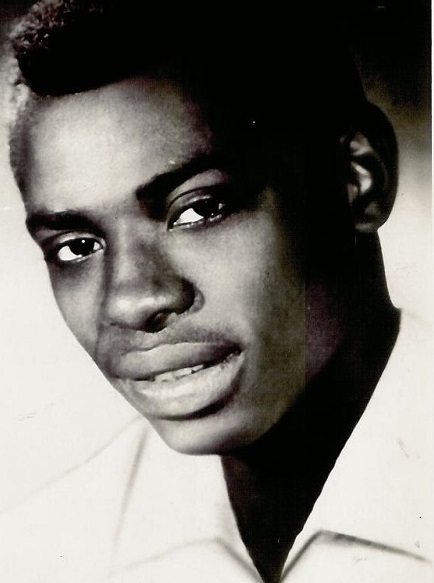 What do you miss mostly nowadays from the music at that time and what are your hopes for the future?

I must say that, unfortunately, there is not a lot of current music that I particularly like in these recent years. I think there are many talented good musicians, who are not given the chance to emerge and others that are artificially brought to success, sometimes undeserved. I would like to rewind music to the 60s when it was more genuine and truthful.

What are the differences between European and American scene for rhythm & blues?

The R & B scene in America as well as the Blues one is more extensive and important than in Europe. Just take a trip to New Orleans and you will face with a multitude of young musicians, many of them are great. On the other hand, it is quite normal as Blues and everything derives from it, was born in America.

Recently what makes you laugh and what touched you emotionally from the music industry?

Amy Winehouse's death struck me: she was so young and such a talented singer with a particular personality.

What makes me laugh? I laugh very often, I really do not know if there is something in particular. Anyway, I was very happy, for example, at the last Rolling Stones’ concert, seeing that the time passed on their skin, but not in their spirit. Our generation of musicians, really great!

Let's take a trip with a time machine, where and why would you really want to go for one day?

If I could travel in the time machine, I would like to go back to my childhood, in Florida and go to our church with my mother (a marvelous gospel singer),where I remember that the voices of the women of the chorus raised high and pure to seem angels.