"The blues can be bittersweet; a mix of sadness, longing, and happy memories too, all at the same time."

Cindy Cashdollar: Slide On The Roots

Austin-based Dobro and steel guitarist Cindy Cashdollar's career has taken some surprising twists and turns that have led her to work with many leading artists in various genres; including Ryan Adams, Bob Dylan, Van Morrison, Dave Alvin, Rod Stewart, Asleep At The Wheel, Marcia Ball, Jorma Kaukonen, Leon Redbone, BeauSoleil, Daniel Lanois, Redd Volkaert, & Peter Rowan. Cindy's unerring ability to perfectly complement a song or step out with a tasteful, imaginative, and exciting solo - and to do it in so many musical genres - has made her one of the most in-demand musicians on the American roots music scene.                                 (Photo by Dale Haussner) 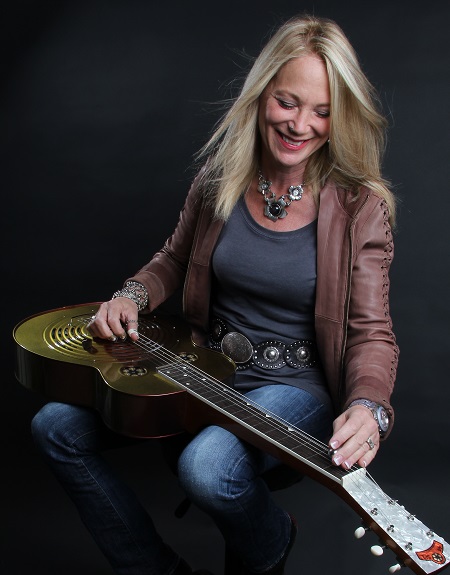 Her debut CD, "Slide Show", features guest artists comprising a Who's Who from the landscape of Roots & Americana music. Cindy was inducted into the Texas Steel Guitar Hall Of Fame in 2011 (the first female to be inducted), and The Texas Music Hall Of Fame in 2012. Cindy first heard the unique sliding sound of the Dobro in her hometown of Woodstock, New York where she honed her skills playing with bluegrass legend John Herald, blues great Paul Butterfield, Levon Helm and Rick Danko, and many others who lived in the small but musically hip Catskill mountain town. Eight years and thousands of miles on the road with the premier western swing group Asleep At The Wheel helped her introduce the classic sounds of the non-pedal steel to enthusiastic audiences worldwide, and brought her five Grammy Awards and opportunities to work with musicians of the caliber of Willie Nelson, Merle Haggard, Dolly Parton and The Dixie Chicks. In great demand as a teacher, Cindy has given many workshops and produced four instructional DVDs distributed internationally by Homespun Tapes. Her debut CD, Slide Show, featured guest artists comprising a Who's Who of roots music including Sonny Landreth, Marcia Ball, Mike Auldridge, Redd Volkaert, Herb Remington, Jorma Kaukonen, & Steve James. Whether adding driving leads behind Rod Stewart or Ryan Adams, swinging an instrumental with Garrison Keillor's Prairie Home Companion band, or trading blazing licks with Texas Telecaster master Redd Volkaert, Cindy does it all with grace, imagination, and taste.                   (Biography by Andy Volk)

How do you describe Cindy Cashdollar sound and songbook? What characterize your music philosophy?

It's hard for me to describe my sound and songbook, because of the many variations of music I've played over the years...I'd say it's a big melting pot of influences and styles. As far as what characterizes my music philosophy, I think that it's important to play from the heart, as well as support the artists that you're playing for and the musicians you're playing with. Be open to and listen to all kinds of music, there's always something to be learned. 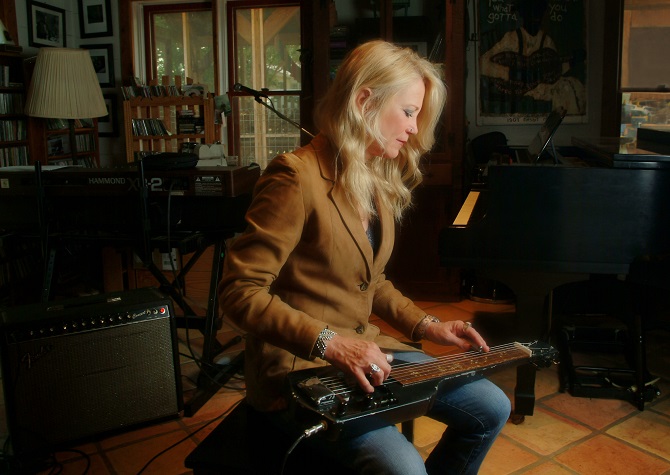 "My fears for the future? That everything will go into full-on internet mode and no one will go out to support live music. However, as long as there are die-hard roots music fans out there, that will unlikely happen!" (Photo by Chuck Holley)

Every meeting and experience has been important to me; they've been like stepping stones. Very much like life itself, you learn from the good, the bad, the boring and the exciting, and move on to the next small step or big leap.

The best advice ever given to me? That would've been from Rick Danko, bass player from The Band. He always told me "Less is more". Of course there's different ways to read into that, and maybe that philosophy doesn't always or can't always work in every musical situation...but from my experiences of playing with him, I know he meant to stick to the song, the feel, the heart of the music.

The one thing I miss from music of the past is the logistics of travel! The cost of touring and the airline restrictions have forced many bands to cut down on personnel, thereby minimizing the size of the group and also the amount of instruments. Imagine trying to tour these days with the size of Duke Ellington's band! A lot of the bigger acts can of course afford it, but for the most part, many artists are cutting back. So my hopes for the future are that this will change...but at the same time, a lot of great creative music is happening in a minimal fashion these days. My fears for the future? That everything will go into full-on internet mode and no one will go out to support live music. However, as long as there are die-hard roots music fans out there, that will unlikely happen! 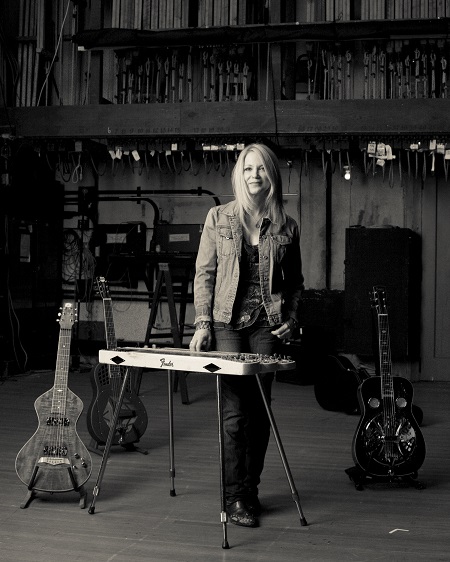 Connecting the lines of Blues, Western Swing, Bluegrass & Folk are pretty easy. Western Swing might be the spoke of that musical wheel, because if you listen closely, it's all in there. Bob Wills used to travel miles when he was young to catch the "tent shows" with Bessie Smith; he heard a lot of blues artists back then...you can hear that influence in the historical Western Swing band "Bob Wills & The Texas Playboys". Before Bob, there was Milton Brown & His Musical Brownies, & they had a banjo early on.

I'm not sure what I've learned about myself from the blues, other than everybody has them on any given day or night and no one's immune. I also think the blues can be bittersweet; a mix of sadness, longing, and happy memories too, all at the same time.

Lots of great memories that make me smile from these folks, too many to list, so will try to keep it short.

Willie Nelson: First met him at a recording session when I worked with Asleep At The Wheel. His eyes were the first thing that made me smile, and he's kind & sweet, very funny, a joy to work with both live & in the studio. We both love Django Reinhardt and had some fun discussions.

Paul Butterfield: Paul had the most cynical sense of humor, especially his observations about people, so almost anything he'd say in that sense made me laugh. I know I'm not alone when I say that listening to him sing and play was like hearing the past and the present rolled into one amazing artist; what a lightning bolt he was.

Van Morrison: I grew up in Woodstock, NY, and Van was one of the first artists I saw perform live, when I was 12 yrs old. It made a big impression, so when I got the call to tour with him decades later, that was a huge smile. I eventually got to tell him about that concert, and amazingly, he remembered what venue it was and who else was on the bill that night.

Peter Rowan: Fond memory of going to Peter's house to pick him up for a gig here in Texas, he had a part time place here. I was a bit early and he wasn't quite ready, so he greeted me at the door in a gorgeous Japanese robe that he'd no doubt gotten during one of his many tours over there. He showed me some of the beautiful paintings that he'd been working on...his artistry stretches to many places, all amazing. 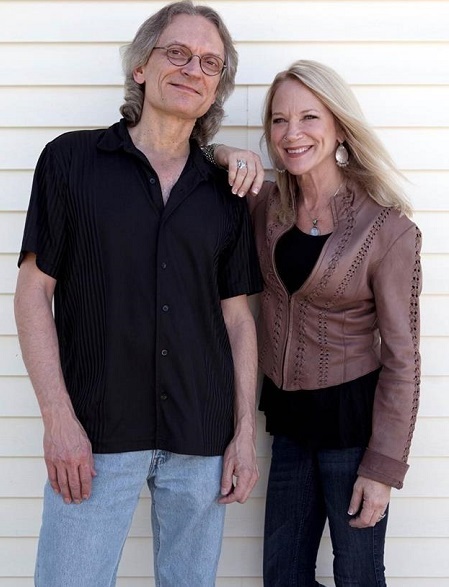 Being a female artist in a "Man's World"  hasn't really been an issue for me, and there's many female artists now, as well as producers, engineers, tour managers, tour bus drivers, all aspects of the business.

I've never played the "chitlin' circuit"; not sure it still exists as before, but maybe there's still some clubs in those areas of the USA that are referred to as such.

Do you know why the sound of resonator and steel guitar is connected to the blues? What are the secrets of Dobro?

One of the roles of the resonator guitar was its use early on by blues street musicians, in order to be heard, so I think that's why it got connected to blues music in the first place. The steel guitar not so much in the beginning, but now blues and just about everything else are played on both. Amazing how these instruments have expanded musically, beyond their original roles in early music. The sound of slide guitar in general is very emotional, and playing with a slide bar is almost similar to singing, the way you can control the pitch and vibrato. If I had to think of what the secrets are to playing any style of slide guitar, it would be to make sure you have total control and knowledge of how to use the slide bar (and get comfortable with fingerpicks)...then it'll sound good to you and you'll be free to just play and not think about the technical parts! But, I do think about it like a voice sometimes and approach it as if I was actually singing the notes.

I would've loved to have been present at any of the early Muddy Waters recording sessions. 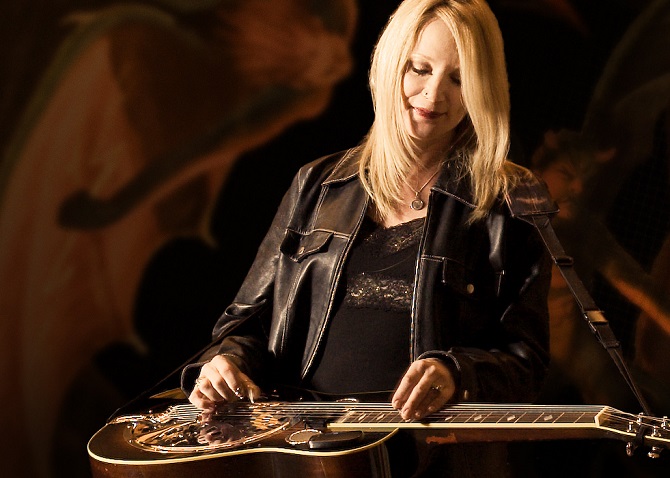