"The blues teaches you about life, and how to tell a story. Blues songs are really short tales that are passed on from storyteller to storyteller."

Martin (Tino) Gross is well-know as front man of the Howling Diablos, owner of Pleasant Ridge recording studio and producer of Funky D Records. Tino, raised by a beatnik-painter mom and he's one of the area's unheralded musical treasures, a walking Detroit storybook and music encyclopedia. The Howling Diablos rockin, funky, blues jam style is well known in Detroit, and everywhere they have toured, as a great live music experience. Since their formation in the 90’s they have toured with and opened for acts including George Clinton’s Parliament Funkadelic, Alice Cooper, Albert Collins, Ben Harper, Hank Williams Jr, NRBQ, Incubus and The James Gang as well as headlining their own shows. Recordings include Beatnik Mambo (Teenage), Live (Top Dog) and Green Bottle (Overture). The Bass Brothers, now teamed with Eminem, produced the title track, “Green Bottle”, a local hit. 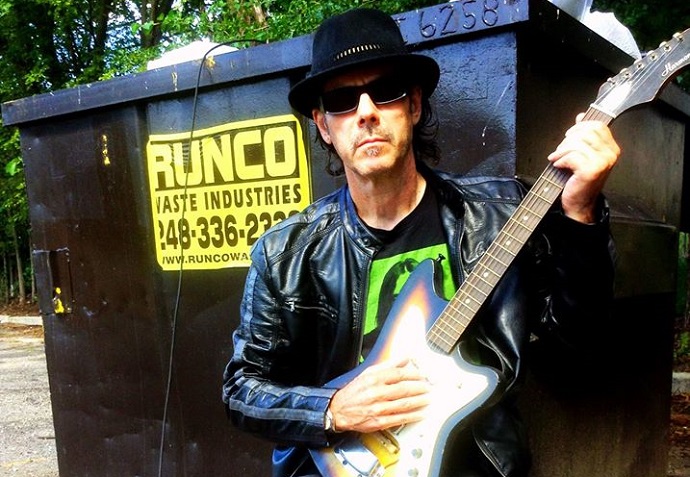 The blues teaches you about life, and how to tell a story. Blues songs are really short tales that are passed on from storyteller to storyteller. Every artist adds his own elements; this is how folksongs and blues are carried forward. The song can be deeply personal or about something that happened. Either way you bring your own personal discovery into it.

Howling Diablos sound is a mash-up of everything we grew up with in Detroit. Soul, rock n roll, jazz, pop, blues…all these sounds are part of the fabric. The Diablos try to be entertaining, but also give the audience a show that will move and energize them. 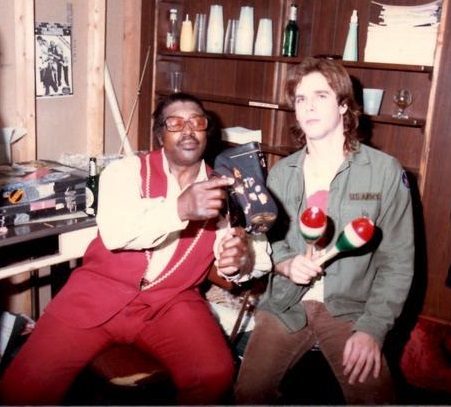 Playing as a young musician with the older, more experienced pros is the best way to learn. I gained a lot of insight from playing behind John Lee Hooker, Bo Diddley (photo), Hubert Sumlin, and people of that generation. Most of those guys are gone, so it’s my job to carry on and teach younger players.

The BEST advice, from Bo Diddley: Always try and get paid before the show! Ha Ha!

Are there any memories from John Lee Hooker, RL Burnside, and Big Walter Horton which you’d like to share?

I have countless memories from all of these people. John Lee Hooker never spoke much, especially before a show. I would watch his foot to pick up the beat, and get an insight into what the next song was gonna be. RL Burnside was extremely comical and very funny. He would tell you great stories with hilarious punch-lines that he had perfected over the years. Big Walter was very mysterious and hard to pin down. He would tell you something one day and completely change it up the next day. Nobody was real sure when he was putting you on, but he was the greatest blues harp player of them all!

The old school Post-War blues guys are pretty much gone. BB King, Buddy Guy, Lazy Lester are still with us, but the great era has passed us by. The younger generation will discover blues and re-invent it. I hear it in Jack White, Black Keys, Gary Clark Jr., and a young band I produce from Detroit, the Royal Blackbirds. The blues will never die because it is the seed for ALL music! 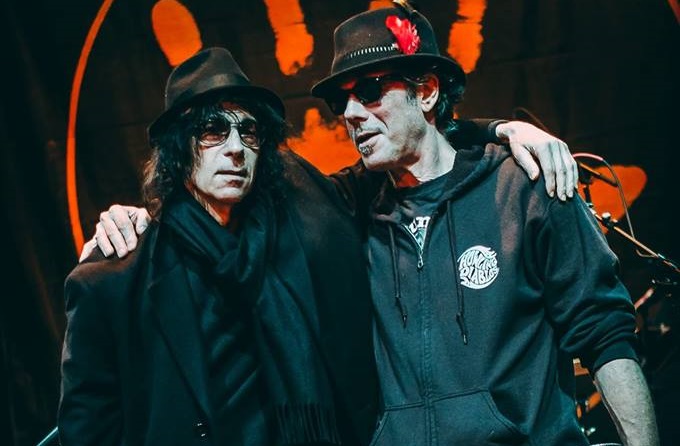 I would like to see music not be so under-valued, especially in the USA. It is such a commercial world that musicians aren’t given the respect they deserve unless they are selling millions of records. True players deserve to be treated more like doctors, or professors, because in my mind, that’s what they are!

Albert Collins had a piercing tone thru that Fender Super Reverb amp and the Telecaster that could cut you in half like a death ray! My ears would literally ring for a day after hearing him, but I loved it. He had some of the best guitar instrumentals, in the Texas Freddy King tradition! Albert could really play and entertain an audience. Hubert Sumlin was a shy man, not really a front-man singer, but he came up with probably the best guitar licks of all of them. Eric Clapton, Jimmy Page, Jeff Beck, Jimi Hendrix, Keith Richards, all got a lot from Hubert Sumlin. Hubert was the blueprint for ROCK N ROLL lead guitar, like Chuck Berry. Jimmy Rodgers was more of a throw back to early country blues. He had an easy going groove that was real suited to being a clever song writer, and lyricist. Jimmy kinda bridged the gap between country and electric blues. Bo Diddley was an innovator, mad-scientist genius who brought heavy African rhythm and street smarts to the game. Bo Diddley was almost like an early Hip-Hop artist. Bo was also funny and a top level entertainer, who will always be remembered for introducing the ‘Bo Diddley Beat, to modern pop music. It was actually based on the old, ‘shave-and-a-haircut..2 Bits!  Groove from right off the boat in New Orleans.

What has made you laugh lately and what touched (emotionally) you from the Motor City music circuits? 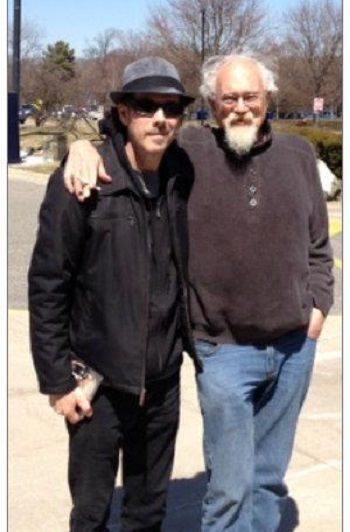 The Motor City is my home and even tho the city has been struggling, the people remain positive and strong. The music is better than ever in Detroit and I love working with some of the new and up coming acts with our Funky D Records label. It keeps me smiling all day long!

"I would like to see music not be so under-valued, especially in the USA. It is such a commercial world that musicians aren’t given the respect they deserve unless they are selling millions of records. True players deserve to be treated more like doctors, or professors, because in my mind, that’s what they are!" (Photo: Tino & John Sinclair)

What are the lines that connect the legacy of Beat generation with the Blues, Jazz and Rock n’ Roll culture?

The Beat generation was tied heavily to the Jazz Scene. The idea was to free your mind from all the conformity that society expects of you. Particularity after World War 2 and all the progress and prosperity of the Eisenhower Era, there was a lot of fear, boredom, and paranoia creeping into American homes. The Beats weren’t having it, and wanted to break barriers and explore forbidden areas of music, art, sex, that were taboo in our culture. This mind-set paved the way for Rock N Roll. Teenagers were ready for more than their parents were offering them and you started to see Anti-Heroes like Brando, James Dean, and Elvis. Comic Books, movies, TV, were all creating an atmosphere of rock n roll! I loved it!

For me personally, it was being invited to play guitar with Bob Dylan at a ‘Sold Out’ show in Detroit at the FOX Theatre. I’ll never forget that night as long as I live. I am a huge Dylan fan, so to be able to play with him was amazing! It doesn’t happen everyday. I haven’t had too many bad moments; there is a way to turn any situation on stage into a good situation or learning experience.

I would love to have been a fly on the wall at Chess or Sun Records studios during the ‘50s when some of those classic records were being made. Just to see Howling Wolf laying down ‘How Many More Years’ would be a hell od a BUZZ! Thanks for the opportunity to share these memories with you and your readers. God Bless! 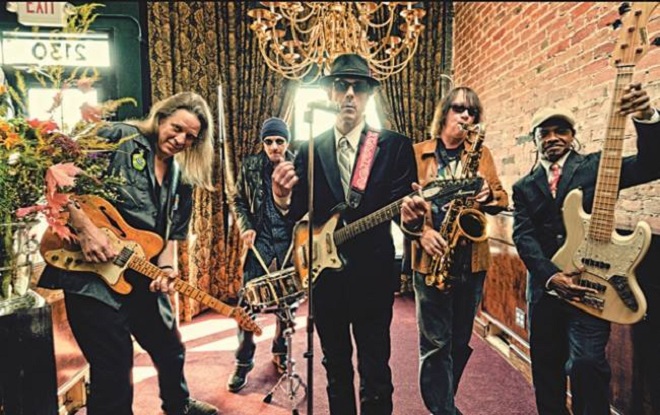