"When I take a good picture, it’s a very satisfying feeling and I feel that my efforts have paid off."

The Interconnectedness of culture

Indra Tamang was born in a mud huthouse in Nepal. The first person he met upon leaving was Man Ray. Indra is probably best known for his collaboration with Charles Henri Ford, but that's not all. He makes delicious tea and lets his big, pokerfaced tortoise swim in the bathtub.

Indra Tamang was given his first camera by Charles Henri Ford in the 1970s. He has since had many cameras and photographed everyone in New York. Studio 54 presented many opportunities and so did his travels. He takes photos and he writes little stories, often on the subject of food. As he says: "I am Indra. Just like you. Not like anyone of you. We are unique. We are ourselves. We are just the only one. I am just Indra." 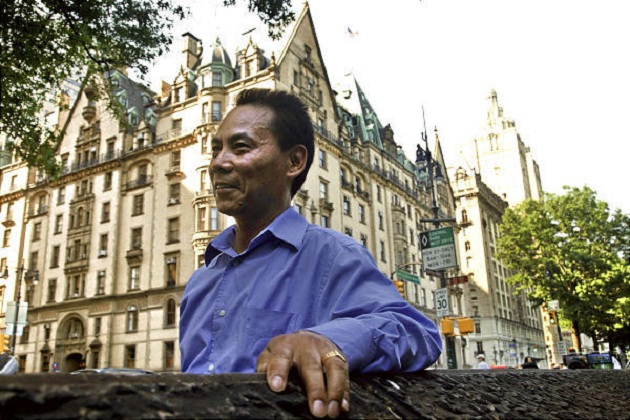 "The best advice Charles gave me was when he would point out certain people and tell me I should photograph them, and I would." Photo: Matthews - AP

Indra Tamang came from a Nepali village that had a witch doctor but no electricity. In his 20s, he met an American poet who changed his life. For the past four decades, Tamang has lived in the iconic Dakota building in New York (on the northwest corner of 72nd Street and Central Park West in the Upper West Side of Manhattan) , and mingled with folks like Andy Warhol, Tennessee Williams and John Lennon.

Tamang's exhibition showed his photographs of people and places from Greece, Paris, New York, India and Nepal. The accompanying haikus, which were in French, offered both a philosophical and humorous commentary.

It was the early 1970s, and Charles hung out with a motley crew of characters from monks to scholars. Tamang's memories from that time are mostly about being happy with a new bicycle, bought for him to help get the household chores done. Nepal in the 1970s had its share of hippies, poets and artists—many of whom Charles befriended.

I had some interest prior to coming to America because I saw Ira Cohen’s work and that of Charles, but it was beyond my capability then. Soon after I came to New York Charles gave me a Kodak Instamatic camera, and I began taking photographs of people and of ‘readymade’ art on the street, such as graffiti and posters.

What do you learn about yourself from photography?

When I take a good picture, it’s a very satisfying feeling and I feel that my efforts have paid off. 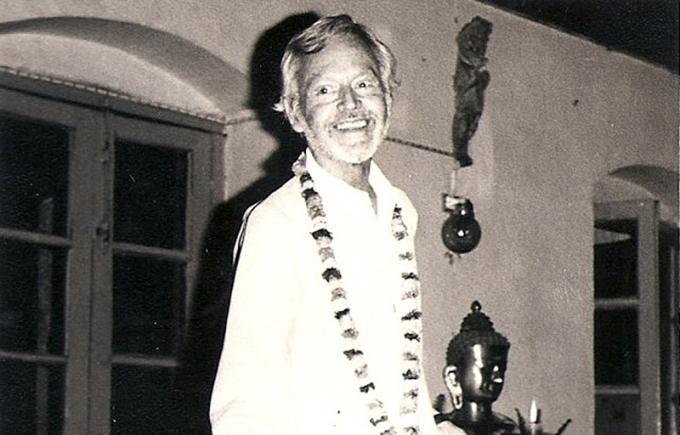 Charles Henri Ford at a 'full-moon-day' party he hosted at his house in Gyaneshwar, Kathmandu, in 1979 - Photo © by Indra Tamang

For me, life has been interesting from the beginning until now. Every day has something special and interesting in it. The most dramatic period would probably be the early 1970s because of all the completely new things I saw. When I left my country of Nepal, I went via Delhi to Athens and Crete, to Paris and finally to New York. Those early years were filled with meeting many interesting people and seeing countless interesting things, as well as learning my second language of English.

Tell me a few things about your meeting with Charles Henri Ford and how did that change your life?

I was working in a hotel in Kathmandu and Charles was a guest. I met him while serving him breakfast, and when he later moved into a house there he asked me to come and work for him, which I did. I happened to take a real interest in the things Charles was doing, and in the people who gravitated around him, and that was the start of a real education for me. Meeting Charles truly changed my life because had I not met him I would definitely not have ended up in New York or doing any of what I’ve done.

How do you describe Charles Henri Ford’s philosophy? What characterized his bohemian way of life?

I don’t recall him ever actually describing a personal philosophy, unless it is “Lose one, find two,” which is something he often said and it can be applied to many things, including his ‘bohemian’ way of life.

What do you miss most nowadays from Charles Henri Ford and what advice has he given to you?

I miss him not being here. As for advice, the best advice he gave me was when he would point out certain people and tell me I should photograph them, and I would. Thanks to that advice, often given, I now have a great archive of photographs of many interesting and well-known characters, many of whom are no longer with us.

"For me, life has been interesting from the beginning until now. Every day has something special and interesting in it."  Photo by Ang Kami Sherpa

Which memory from Charles Henri Ford makes you smile?

When Charles was in a hospital rehab center in 2002, he would take out his dentures when his dinner was served, and leave them on the tray while he ate. One day when the aid took the tray away she unknowingly threw away his dentures. He realized later that they were missing. Allan Frame and I spent hours searching through the vast piles of garbage in the hospital basement until we finally found them, which was miraculous.

How important was music in his life?

I think jazz and the blues were what he most enjoyed listening to, but he also liked other kinds of music too. In Nepal and Greece we’d listen to music on Voice of America through the shortwave radio, and at certain hours they would play jazz and blues, and I remember that he liked Blondie and Patti Smith, too, and lots of others.

Are there any memories of Andy Warhol, John Lennon and Patti Smith which you’d like to share with us?

I met all of them, and I have fond memories of all of them. I didn’t know them intimately, but I’d see them at events and openings. I saw more of Andy than the other two, and he was one of the very first people Charles took me to meet in 1974 at the Factory. I also met Taylor Mead there on another visit just before Christmas.

Would you mind telling me your most vivid memory of William Burroughs, Ira Cohen and Allen Ginsberg?

Once William came to lunch at the Dakota. I made lunch, and later we found out that he didn’t like the lunch I made. And we didn’t serve him vodka, we served him beer. Apparently, he wrote an unfavorable review of my lunch in his diary. As for Ira, I remember walking through the San Maria gorge with him, and when we reached the town on the other side, a dog took a disliking to Ira or perhaps the floppy clothes he was wearing, and showed Ira all of his teeth. About Allen Ginsberg, the most vivid memory would be his prickly beard whenever he gave me a hug at an art opening. Tamang practising kicks with the sandbag at Charles' house in Hania, Crete, Greece, in the 1980s - © by Indra Tamang

What are some of the most memorable tales from your stay in Greek island of Crete?

Going fishing with the native children, learning Greek and swimming. I learned to swim in Crete. It was almost like a second home. I liked everything except the immigration.

What about the long drive from Istanbul to Kathmandu via Iran, Afghanistan, Pakistan and India?

It took three weeks to reach Kathmandu from Istanbul, Martin Miles, Charles and I. Martin, who owned the Volkswagen van, was the driver. We stayed in little hotels along the way and I was so young I didn’t know much about the world. If I had known more, I would have taken tons of photos on that trip, but I don’t have a single shot from it.

What is the line that connects the legacy of Charles Henri Ford with the Beats to 60s generation and beyond?

I would say that connection has more to do with the time in which Charles lived than with anything he did.

How important was the role of Nepali culture in the case of literature, art and music in “Outlaw” community?

They adopted it completely and went along with the local culture, so it found it’s way into their work. First they blended with the local people and then they used local things for their work, such as rice paper and woodblocks, for poems and posters and books. Ira created his Bardo Matrix publishing empire at the time. I think Ira was the one who ‘went native’ the most. Charles too, but in a different way. I do think the expats smoked a lot more weed than the locals did. 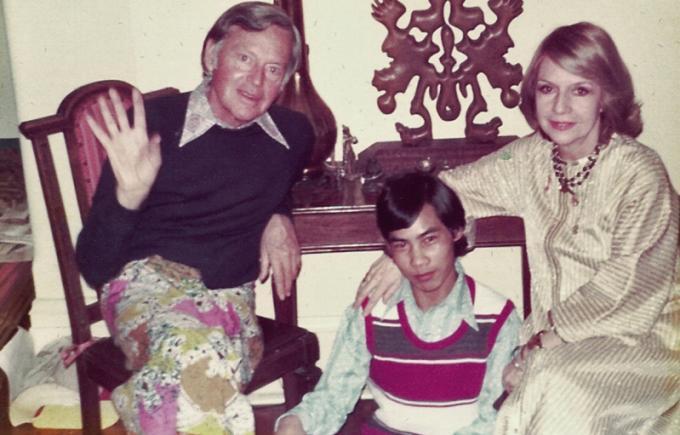 Charles Henri Ford, Indra B Tamang and Ruth Ford at Ruth's apartment in the Dakota building in 1976 - © by Indra Tamang

You have come to know great personalities. Which meeting was the biggest experience for you?

Charles and his sister Ruth.

What from your memories and things (books, records, photos etc.) you would put in a "time capsule"?

The book Lowlife in High Heels by Holly Woodlawn, “Call Me” by Blondie, “I will Always Love You” by Whitney Houston, Stevie Wonder’s “I Just Called To Say I Love You,” Billie Holiday and Louis Armstrong records, one of Charles’s poem posters and my photo of Andy Warhol with Brooke Shields taken at Studio 54.

Hermitage is about everything that revolves around my daily life 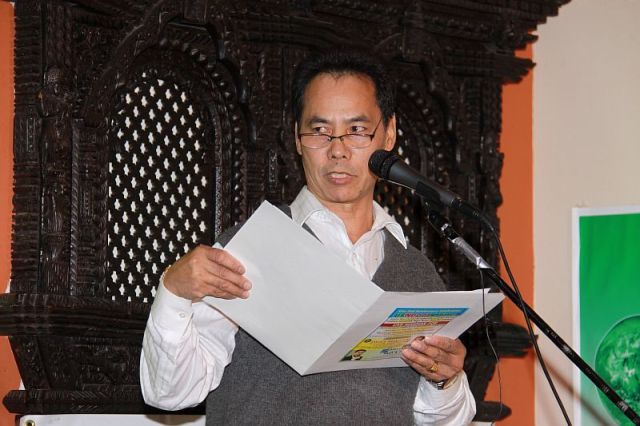 "I think jazz and the blues were what he most enjoyed listening to, but he also liked other kinds of music too. In Nepal and Greece we’d listen to music on Voice of America through the shortwave radio, and at certain hours they would play jazz and blues, and I remember that he liked Blondie and Patti Smith, too, and lots of others." Photo by Lab K. Budhamagar