"Blues music is at the heart of our very rich heritage of growing up in the United States. There is a lot of noise and distraction nowadays to confuse and waste the only thing we really have, which is time, and a limited amount of it, at that. Don’t waste it! The impact of Blues is elemental and powerful. It began, and is, Black, African-American music, but it is embraced and preserved by everyone, now."

World-touring acoustic blues pioneer Catfish Keith has established himself as one of the most exciting country blues performers of our time. Catfish's innovative style of foot-stomping, deep delta blues and American roots music has spellbound audiences all over the world. He has reinvented the guitar with great power and artistry, and brings a rare beauty and vitality to his music. Catfish has been considered for thirteen GRAMMY AWARD nominations. He is a three-time BLUES MUSIC AWARD nominee for BEST ACOUSTIC BLUES ALBUM by The Blues Foundation in Memphis. Catfish has 18 chart-topping albums to his credit, and packs houses all over the world with his dynamic stage shows. A 2008 inductee into the Iowa Blues Hall of Fame, the 40-year veteran has performed thousands of gigs, toured the USA, UK and Europe, headlined major music festivals, and appeared with legends John Lee Hooker, Ray Charles, Robert Cray, Koko Taylor, Taj Mahal, Leo Kottke, Jessie Mae Hemphill, Johnny Shines, John Fahey and many others. 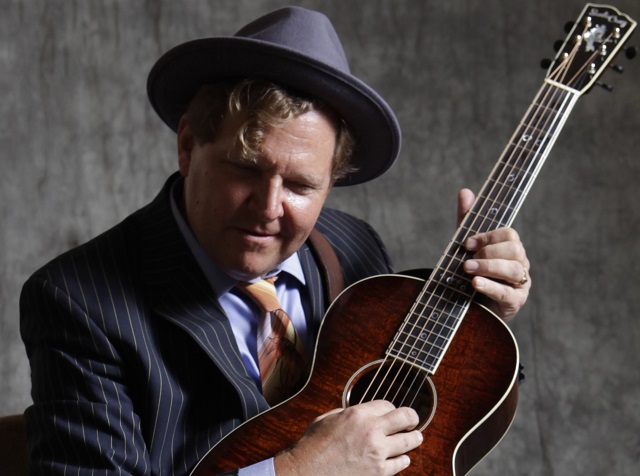 Acoustic blues guitar pioneer takes his foot-stomping, string-twanging Delta blues and roots music to new heights with this, his 18th album, CATFISH CRAWL (2019). This album tackles a ragtime tickle dance, hypnotic Mississippi Hill Country pieces and even a trip-inducing Bahamian fantasy from prohibition time. A big handful of original songs are played on a passel of groaning guitars, with reimagined gems from Jessie Mae Hemphill, The Carter Family, Johnny Shines, Furry Lewis, Big Bill Broonzy, Jim & Bob (The Genial Hawaiians), Bo Carter and Cannon’s Jug Stompers. 13 cuts include: Catfish Crawl, Go Back To Your Used To Be, Bella Mina, Dixie Darlin,’ Don’t You Call Me Crazy, Ramblin’ Blues, Little Pal of Mine, Willie Mae, By the Waters of The Minnetonka, Memphis Morning Train, Turn Your Money Green, Banana In Your Fruit Basket, What’s The Matter Now?

I have been profoundly influenced, especially by those artists that I have met and known personally. I’ve been a touring and recording professional musician since I was a teenager, so over 40 years, now. When I was younger, I was lucky to live in an era where there were still artists playing from the original years of blues music. I got to know and play with some real heroes! Johnny Shines, Jessie Mae Hemphill, Honeyboy Edwards, Henry Townsend and John Jackson were just a few of the early, and great musicians that I got to spend time with.

I am constantly learning from the classic records, but the experience and cultural context of having these great masters as friends and mentors brought the most meaning to the music, this is something that you would never get from just learning songs from records. And the whole deep and beautiful treasure trove of truly wonderful music brings me endless joy. I take a dip, and bathe in it, most every day! The journeys have been many, they are countless, through time and songs. The tours and gigs have been fantastic. Penny and I just completed our 49th Overseas Tour of the UK, Ireland and Northern Ireland. That was very powerful and I can’t wait for the next adventure, which will take us to California, then New Orleans, then Southern Mexico! 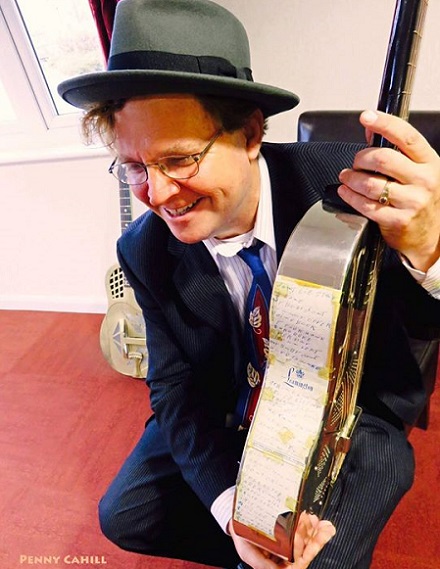 I listen, deeply, and make my versions of favorite pieces that come from classic Country Blues, Ragtime, Hill Country Blues, Island pieces (from the Caribbean and South Pacific), Old Time Country and Early Jazz and all kinds of roots and folk music. I essentially reinvent or recreate all pieces in my own style. And my songwriting reflects this. To me when I hear my own songs, they are the exact same thing as the old songs and approach that I am inspired by. I’ll get a seed of an idea from some cool old song, say, from Rev. Robert Wilkins, or Arthur Big Boy Crudup or Memphis Minnie, and write my own piece from that. My creative drive I’d say is an elemental thing, a product of what I call “daydream” guitar playing, I’ll just lay in bed with a guitar and just play for hours. And from that, often, whole songs pour out. Then, when it’s time to make a new record, I gather all of these songs and craft them into shape; it’s a very intense period of 2-3 months where I’ll craft and work on 20 or 30 songs and by the time I land in the studio, within a few days I’ll capture another satisfying record.

What are some of the most important lessons you have learned from your paths in the blues circuits?

Lessons? Like all of life: take care of yourself, be as prepared as you can, eat right, show up on time, make your best self. Do what you say you are going to do. Be kind. Enjoy the music. Don’t expect anything. And, keep forging ahead. Our path has been unique and very DIY. We have had some great, fateful, and life changing turns. It’s all been a blessing, and I have a great desire to create more music. I’ve been VERY lucky that my wife and manager, Penny Cahill, has been my partner in all of this over our 32 years of marriage and touring. She is a great strength to me, I think she loves touring and the road even more than I do! I love her more than there is. When I see her rocking out at the soundboard, then I know I can just fly away with the music. It is the closest to what God must be, totally transcendent.

What would you say characterizes your new album "Catfish Crawl" in comparison to previous albums?

Catfish Crawl was a blast to make. Very similar approach as all of my records in that it’s mostly all just me: solo guitar fingerpicking and some slide guitar, on several instruments, and singing. Sometimes I’ll do a duet with myself, singing harmony and playing a second guitar, but mostly it comes down to this: how much music can one person with a guitar make?

I always loved the magic of all of the cool weird solo artists, so my music celebrates that. So, in the creation of it, you will hear bass, rhythm, melody, harmony, even counterpoint and improvisational aspects that are sort of like a tightrope walk. The goal is to never fall down! 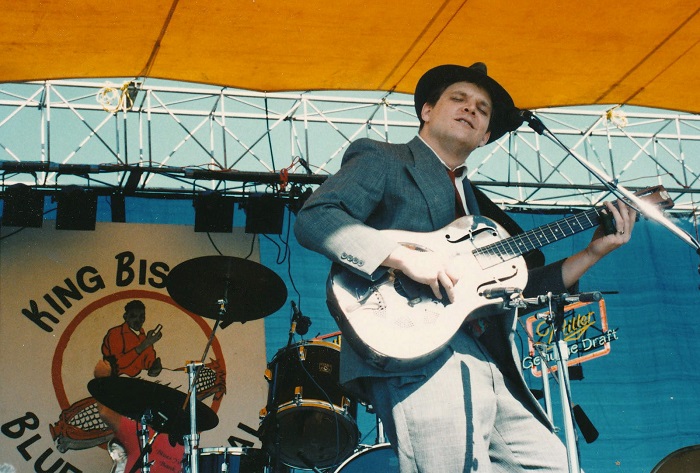 "I have hopes that many more young people will embrace the music. I can see some young musicians playing it, but the next big thing is getting young fans at the shows. I hope the kids will come! And that they will embrace it, hopefully, for the right reasons: quality and depth and real artistic expression." (Photo: Catfish Keith at King Biscuit Oct. 1991)

Blues, and real country and roots music comes out of a huge, rich, and deep heritage. You GOT to study it. You have to absorb all of the culture and repertoire and history. It can only be a state of mind with that education and generations of music behind it. And, there is something primal and so damn good about it, it just gets in your blood!

Well ALL of the originators, from the early days of the 1920’s, 30’s and 40’s are a long time gone, now. I was very fortunate to know some of them personally when I was a young whippersnapper. I also have many friends and heroes that are a generation ahead of me that I knew and learned directly from, these are very important artists. Many are still playing the best music of their lives: John Hammond, Rory Block, Roy Book Binder, Paul Geremia, Greg Brown, Robert “One Man” Johnson, Happy Traum, John Sebastian, Koerner, Ray and Glover, Bob Dylan, and many more. Some are gone and were very encouraging to me when I was a young fella: Dave Van Ronk, John Fahey, Robbie Basho, Spencer Bohren. These relationships mean a lot to me.

I have hopes that many more young people will embrace the music. I can see some young musicians playing it, but the next big thing is getting young fans at the shows. I hope the kids will come! And that they will embrace it, hopefully, for the right reasons: quality and depth and real artistic expression. 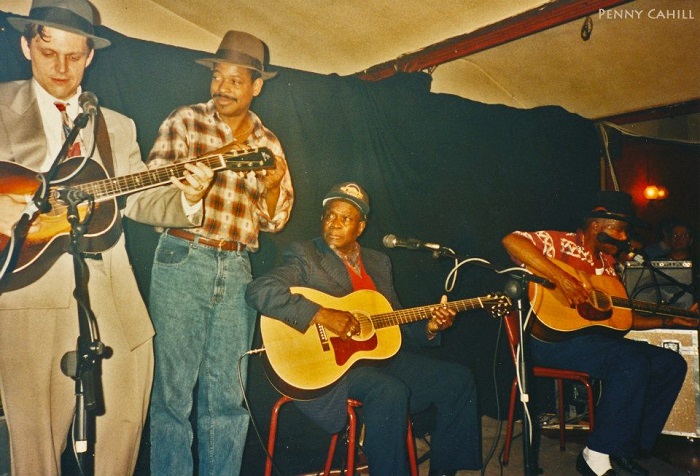 "I listen, deeply, and make my versions of favorite pieces that come from classic Country Blues, Ragtime, Hill Country Blues, Island pieces (from the Caribbean and South Pacific), Old Time Country and Early Jazz and all kinds of roots and folk music. I essentially reinvent or recreate all pieces in my own style. And my songwriting reflects this." (Catfish keith, Phil Wiggins, Honeyboy Edwards, and John Cephas, Dublin 1992 / Photo by Penny Cahill)

Blues music is at the heart of our very rich heritage of growing up in the United States. There is a lot of noise and distraction nowadays to confuse and waste the only thing we really have, which is time, and a limited amount of it, at that. Don’t waste it! The impact of Blues is elemental and powerful. It began, and is, Black, African-American music, but it is embraced and preserved by everyone, now.

The music was a revelation to me, a clarion call when I was just a fifteen-year-old kid in Davenport, Iowa. I’d been playing the guitar for 2-3 years, and started to pick up some steam and it all came to me in a stoned revelation: I knew what I was going to do with my life. It all started where I was born in East Chicago, Indiana, those steel mill smokestacks and the old neighborhood on Pulaski Street, all of that is part of me. Now, here I am over four decades later, and it still feels just as fresh a vibrant as it did on that revelation day in the 1970’s.

It’s fun to imagine. Just off the top of my head, I’d love to be there in the studio to witness Lonnie Johnson and Eddie Lang play their hair-raising guitar duets of the late 1920’s. Or maybe be in England in the 1960’s to see the American Folk Blues Festivals. Or Newport Folk Festivals of 1964 or ’65 to see Son House and John Hurt and Skip James. Or, to be in that New York City club in 1939 when Sister Rosetta Tharpe played with Lucky Millinder’s Orchestra. In a way, I’m stepping into the time machine every day, living in my own reimagined retro future. And I got to say, it’s a magic thing.