"The Blues speaks precisely of that, of the struggle for the same rights for all, there is no color, we are all human beings. Blues is the most direct music, which enters the heart."

Argentinian Mariano Cardozo is a hard worker blues producer, musician, manager and director of Baires Blues Productions. Baires Blues works for the mysterious and delicate Blues flame continued on in all the souls of America. In the 90's the heart of Buenos Aires beat to the rhythm of the blues. His profound beauty and delicate essence as a fire spread throughout the city. Attracted by the burning "bluesy" and responding to an overwhelming demand, prominent blues graced the stages of Buenos Aires: BB King, Buddy Guy, Albert Collins, James Cotton, Albert King, Magic Slim, Hubert Sumlin, Koko Taylor, shone and inspired local artists who are now leading figures in the local blues. In contrast to the 90, in 2000, attends a scarcity of Blues artists on stage, who fails to meet the demand for a public that continues avid blues. In response to the fervent demand and being part of this need arises Baires Blues Productions. 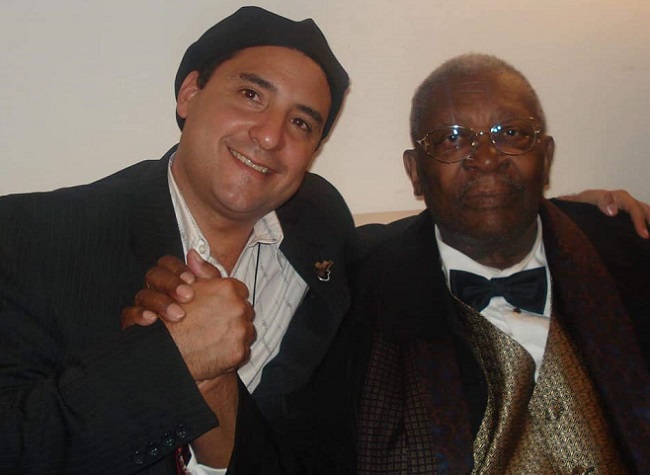 "The most important reason is to do what I love, spread the Blues and enjoy everything I can. The mission is that, Keeping the Blues alive." (Photo: Mariano Cardozo & the late great bluesman, BB King)

Baires Blues Productions are a group of people interested in the dissemination, consolidation and development of the blues in all its styles, in our country and South America. Founded in August 2008 with more than forty international and national shows under his belt, organized in Argentina and neighboring countries, involving the likes of Magic Slim, Mud Morganfield (son of Muddy Waters), Tail Dragger, Kenny Neal, Tony Coleman (BB King's drummer), Slam Alen, Chris Cain, Lurrie Bell, Vasti Jackson, Rick Estrin, Fred Wesley & The New JB's, John Pizzarelli.

The Blues changed my life and my way to seeing the world 30 years ago, when I first hear Muddy Waters for first time.

I been able to travel to Chicago, Memphis, New Orleans, Mississippi and New York, 32 trips for be exact. On trips, I saw many of the most important Bluesman, for example, Otis Rush, BB King, Bobby Blue Bland, Magic Slim, Al Green, Wilson Picket, Son Seals, Eddy Clearwater, to name a few.

What were the reasons that you started the Baires Blues Productions? How do you describe your mission?

The most important reason is to do what I love, spread the Blues and enjoy everything I can. The mission is that, Keeping the Blues alive.

I could mention many, but I want to name to Chris Cain, he was the artist surprised to me most, amazing guitarist and singer, with a lot of humility and talent. The best advice I was is wit Eddy Clearwater, he always told me, yo have to do what you feel more, that is the secret of this life. 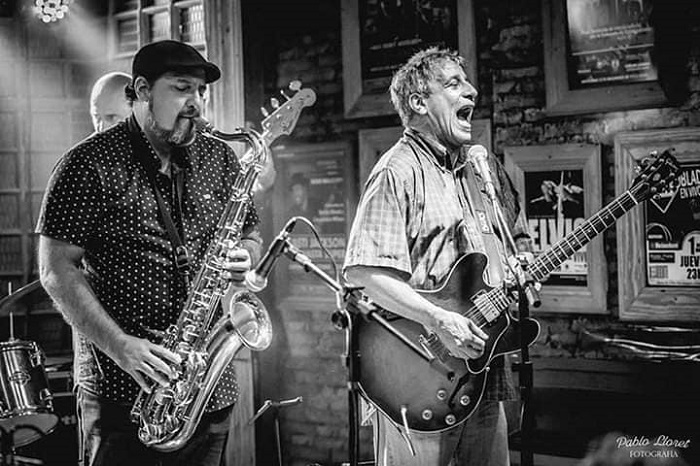 Are there any memories from gigs, backstage and on the road with bluesmen which you’d like to share with us?

There are really many over 11 years of shows, but I will mention in the shows with the artist Slam Allen ( guitarist and singer with James Cotton for 10 years), he always comes down to play and sing among he people, and always offer to play the guitar to someone in the audience, that gesture always seemed like a great artist.

I miss the greats who left, BB King, Otis Rush, Magic Slim and others. I think the Blues does not have much spare, we have few new artists, there is little new generation really playing Blues. Anyway, I think the Blues will never die.

Make an account of the case of the blues in Argentina. Which is the most interesting period in local blues scene

Without a doubt, the golden era of the Blues in Argentina was the beginning of the 90s, here we had a good value of the dollar and in those years we had the greatest Blues artists, BB King, Albert Collins, Buddy Guy, Albert King, James Cotton, some came several times, the best time.

What are some of the most important lessons you have learned from your paths in blues circuits? "The Blues changed my life and my way to seeing the world 30 years ago, when I first hear Muddy Waters for first time." (Photo: Mariano Cardozo & Lurrie Bell)

Surely a lot, because the Blues speaks precisely of that, of the struggle for the same rights for all, there is no color, we are all human beings. Blues is the most direct music, which enters the heart.

I would like to spend a whole day on tour with the great Albert King, on his bus and with his mules and live that experience with one of my most important idols of the Blues.