Q&A with Austria-based bluesman Al Cook, a living legendary musician and one of the pioneers of the continental European scene

"The blues is in fact a state of mind. Otherwise you just play music."

Al Cook: Nothing But The Blues Roots

Al Cook (born Alois Koch) grew up in Vienna, Austria. The visit of the Elvis movie Gold from a hot throat at the age of fifteen awoke in him the desire to make music. He started teaching himself guitar, piano and singing. After first encountering the blues, Al Cook learned instrumental and vocal techniques from historic blues musicians. His idols included vocalists such as Blind Lemon Jefferson, Charley Patton, Son House, Texas Alexander and Robert Johnson. At the beginning of the 70s, Al Cook achieved such a reputation that he was part of the Austrian popular culture until the middle of the decade. At this time he performed in Vienna's Jazzland with blues musicians like Roosevelt Sykes, Johnny Shines, John Jackson, Honeyboy Edwards and Little Brother Montgomery. 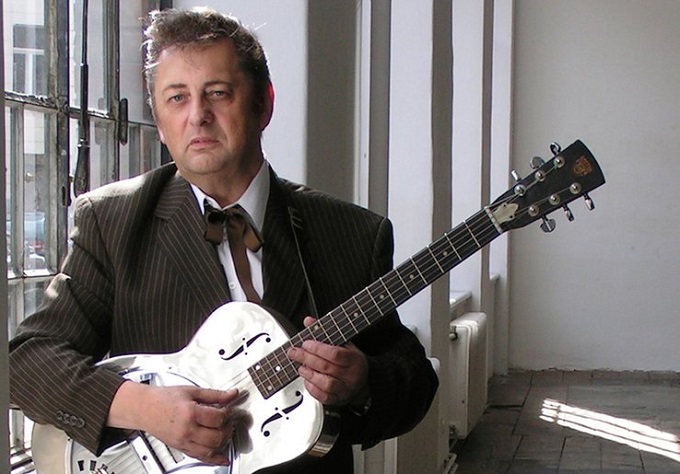 Al Cook influenced many musicians and was partly also an artistic impulse for some of the leading domestic blues musicians like Erik Trauner, Siggi Fassl, Stephan Rausch and Michael Pewny as well as many Austrian scene musicians. From 1983 to 1986, Al Cook used the then Rockabilly Revival to span the arc from blues to rock 'n' roll, giving his popularity an extra boost. In 1989, he finally turned his back on rock 'n' roll to devote all his artistic power to country blues. As an important part of his artistic mission, Al Cook sees his commitment against the growing influence of pop culture on the blues. On November 15, 2014, Al Cook celebrated his 50th anniversary at the Metropol. Al's autobigraphy book "Kein Platz für Johnny B. Goode: Blues als Rebellion gegen den Zeitgeist" released in 2016. His last album titled "Take It Off Slowly - Dana Gillespie Meets Al Cook and His Original Al Cook Band" (2019).

How has the Blues and Rock n' Roll culture influenced your views of the world and the journeys you?ve taken?

In 1960, when I was 15, I slipped into the world of music literally by accident. I happened to watch an old Elvis movie from 1957, called „Loving You“. Until this day, my prime interest was to become a scientist, but had to take a job as a mechanic in a factory. From this day on, I made a do-or die-decision to become a rock 'n' roll star like Elvis, pursuing such a career in hope to make a better living. While I completely identified myself with the culture and the life-styles of the 50's, the world has changed into the beatles-era, which I really disliked.

During my first appearance in 1964 I failed in front of an unprepared audience and was in search of possibilities to make it elsewhere, playing my favorite music. But soon, I came in touch with samples of historical recordings of prewar blues artists and began to involve myself in the world of archaic country blues.

Until today, I never been to the United States and my eyes never saw the land where the blues began, but I have a profound knowledge of the history, the styles and the artists, who were big in the blues field.

After a long period of self-education and studying the blues history, I began to compose my own material, because I did not want the audience consider me a copycat or a mere revivalist. In fact, I keep myself very close to the blues-tradition, but there must be enough space for spontaneous creativity on the spot. My drive comes from a kind of inner energy, that works out on lyrics and melody. To describe my sound characteristics, i must say, that I use different blues styles for different songs. If I work on a subject, I use those styles like a painter selects the colors to meet the requirements of the final product....so to understand. 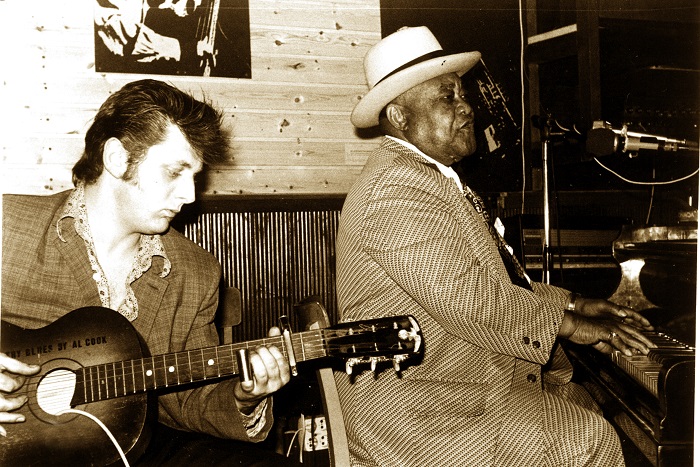 "Roosevelt Sykes refuted the widely misused theory, that the blues is a self-pitying slave-music. „The blues is played to rescue the people from getting it“. I think, that tells all about the subject." (Photo: Al Cook & the late great Roosevelt Sykes, jamming at the vienna "Jazzland" on May 9th 1974)

I once had the luck and the honor to jam with the last giants of blues as well as listen to their stories and benefit from their life-experience. Along with many artists, outstanding are pianists Roosevelt Sykes and Little Brother Montgomery, Johnny Shines and Honeyboy Edwards, who were both friends and contemporaries of the legendary Robert Johnson as well as John Jackson, who was a buddy of Blind Blake. Not to forget Isaiah „Doc“ Ross, who knew Elvis at 16.

Yes, Roosevelt Sykes refuted the widely misused theory, that the blues is a self-pitying slave-music. „The blues is played to rescue the people from getting it“. I think, that tells all about the subject.

Are there any memories from gigs, jams, open acts and studio sessions which you?d like to share with us?

My first appearance on stage closed with a sobering statement of a workmate, who stopped me at the exit of the concert hall: „Hey, what the hell do you want with that Elvis. Did you miss, that there are the Beatles overtaking?

Doc Ross told me, that he gave Elvis an advice: „Looka here boy, If ya keep starin' down at the floor, you ain't goin' nowhere.“ I think El took it pretty serious.

I was at a birthday-party playin' and somebody drew my attention and told me: „Al, your music done real well...you just saved a young woman, was about to commit suicide“. That made me proud to have learned an instrument.

Blues artist Homesick James appeared at the Vienna Jazzland and performed commercial combo blues. After the concert he sat down and showed off some amazing country-blues pieces. So I asked him, why he did'nt give us such hot stuff on stage. „No,“ he replied dryly, „that does'nt make me a lousy dime“. Judge for yourself... 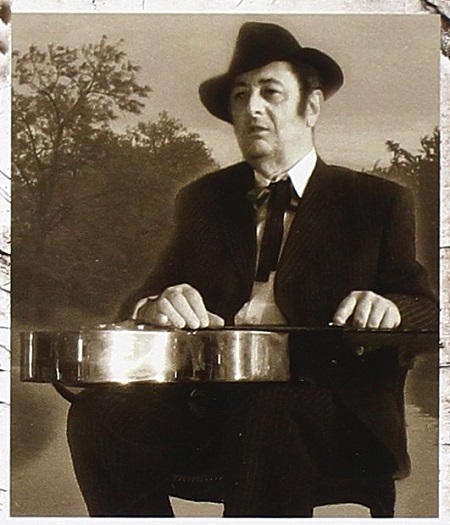 The progressive death of the classic blues-tradition within the black community traces back to the advent of the civil rights movement at the close of the fifties. Black people gained self-conciousness and wanted to get rid of the „uncle tom“ stigma. The blues-culture was associated with semi-slavery, segregation and the ruinous share-crop system.

The maintaining of of the blues-heritage was from then on a white mans affair. Mostly intellectuals and jazzoriented fangroups were overtaking to keep the traditional genre of the blues alive.

But at the close of the 60s as Rock-Music was conquering the taste of music-lovers, the more suitable electric chicago style was to become generally associated with the term „blues“. The musicians and dedicated fans appreciating the, let's say, „real“ Blues shrinked to a fading minority, because that kind of music requires a certain portion of identification with the subject.

I really hope, that there may some latent talent coming up to carry on with the work I do now for 55 years, influencing young musicians to meet the amazing world of the real and authentic blues.

The fact is, that the younger generation is simply not enough engaged and the interest may vanish during the next ten or twenty years, despite the nearly unlimited information available at the worldwide web.

Make an account of the case of the blues in Austria. Which is the most interesting period in local blues scene?

When youngsters decide to take the highway to the blues, the story goes nearly all the same way. Starting off with enthusiasm and mainly acoustic instruments, it ends up in most cases with Stratocasters or Flying Vs plugged into overdrive amps, like a thousand others.

In spite of that, I sure can name a few, that know what the stuff is all about.

The most interesting period honestly is hard to detect. But I think the late 70s and 80s were partially fruitful. 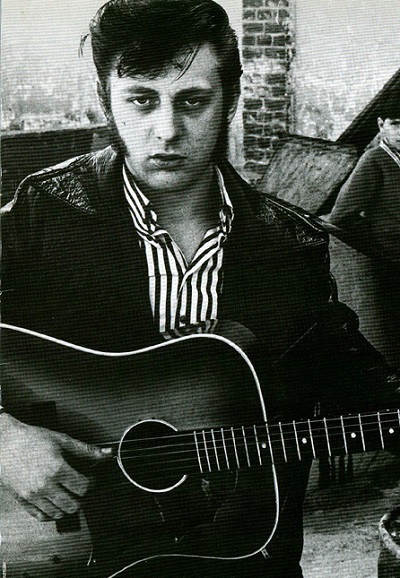 To be honest, when the local scene began to develop, I had been on stage for more than ten years and it was me to teach and show others.

"During my first appearance in 1964 I failed in front of an unprepared audience and was in search of possibilities to make it elsewhere, playing my favorite music. But soon, I came in touch with samples of historical recordings of prewar blues artists and began to involve myself in the world of archaic country blues."

What is the impact of Blues to the socio-cultural implications? Do you consider the Blues a music genre or state of mind?

As far as I know, I left my traces even on the popular-cultural music-scene. But I neither consider myself influencial outside music, nor the blues as socio-cultural relevant. At last in our country.

The blues is in fact a state of mind. Otherwise you just play music.

Let?s take a trip with a time machine, so where and why would you really want to go for a whole day?

Simply, I would like to go back into the prewar era and see all the classic musicians in their heydays and meet them in person.