Q&A with Austrian musician Anton Mühlhofer, expressing his passion for the Latin world and Cuban music in particular.

"Music reflects very much the culture of a place, like the language, the way people speak."

Austrian musician/bandleader Anton (Toni) Mühlhofer, studied Classical Percussion at the University of Music and Performing Arts in Vienna, Drums (Jazz) at the Conservatory of Vienna and further studies at the Berklee College of Music, Boston, USA. Toni has performed with Joe Zawinul, Toots Thielemans, Steve Hackett, Johnny Logan, Arturo Sandoval, Eddie „Lockjaw“ Davis, George Masso, Jim Galloway, Fatty George, Leo Wright, Placido Domingo, Angel Romero and many others. Anton Mühlhofer, who made many trips to Cuba at the beginning of the 1980s in order to study Cuba's rich musical heritage, founded the group "Caoba" in 2003. When one looks up the word "Caoba" in the dictionary, one finds: rare tropical wood (mahogany). He had already produced two CDs – "Mi Mundo" (1998) and "Sabor No Tiene Color" (2002) – in Santiago de Cuba. The self-title album "Caoba" released in 2017.           Anton Mühlhofer / Photos © by Andreas Eisler 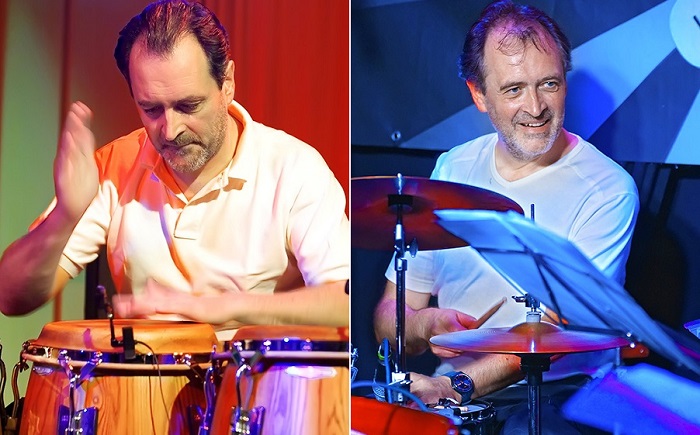 After numerous trips to Cuba, where he had the opportunity to deepen his knowledge of Afrocuban music with Carlos Aldama Perez from „Conjunto Folklorico Nacional“ and other teachers, Toni decided to produce his own albums expressing his passion for the Latin world and for the Cuban music in particular.

How has the Jazz and Cuban music influenced your views of the world and the journeys you’ve taken?

Traveling always is connected with experiencing new things. I am not a person who is living Music or Jazz as a kind of life philosophy, although music is nearly always on my mind and in my head (which can be really very unpleasant too, like an illness!). Music reflects very much the culture of a place, like the language, the way people speak. For instance: Brasilian Portuguese sounds totally different than Cuban Spanish, it has different rhythms and accents, so if you play the same tune but singing in another language, its not the real thing anymore, different, ok, you might like it, great, but just be aware, it is a different thing and feel.  So, music does not change my view of the world, it influences the way I perceive it, because the world is the world!

How do you describe your sound and progress? What characterize your music philosophy?

On Congas and Bongos I love the „old“ sound like Mongo Santamaria, Armando Peraza, Candido… , fat but still cutting, I am still working on it. On drums: Dennis Chambers, Buddy Rich, Airto Moreira for Brasil… My music philosophy: Energy!!! But watch out: It has nothing to do with playing loud, only if it is a loud style of music, go ahead, it´s fun!! If music has no energy, forget it!! This is for making and listening music as a form of art and entertaining, but might not apply for music-therapy in medical use.

Meeting and playing with an Argentine musician (singer and guitarplayer) when I came to Vienna (from countryside 1978) called Fito, he travelled and played all over the world, also Cuba in the late 50´s. He knew about the music of whole south-america and tought me a lot, just like this, no official lessons. He called me for a party-gig, we never met before, no rehearsal and played like we knew each other for years… instinctively. Basically, for Latin-Music he is my father, I knew nothing before that, only the love and passion somehow was already there, I owe him a lot...! Later he was my marriage witness (me marrying my beautiful and very patient Bolivian wife). Sadly Fito already passed away... Also meeting Buddy Rich, Joe Zawinul, Mongo Santamaria. Best given advice: Years ago, I saw an interview with Ray Charles (still alive, I think on NBC) talking about his life and they asked him the same question. He replied: „Don´t bullshit yourself!“ 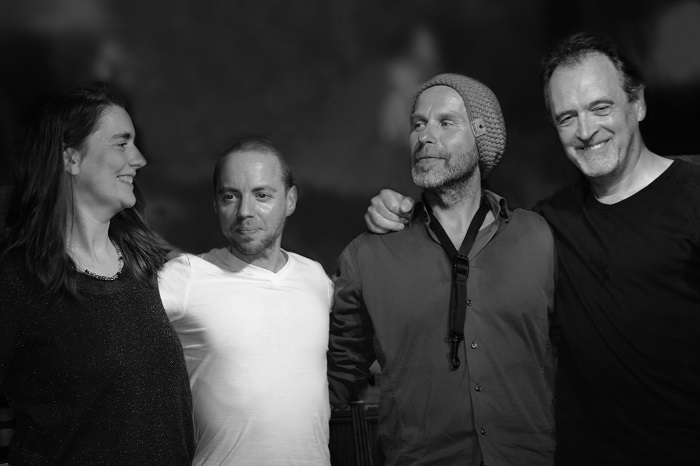 "The population in Cuba is very, very mixed! I love that. And race (color of your skin) is not a real topic. Your color in Latin/Salsa-concerts actually does not matter all over the world! The race issue in the USA (outside these concerts, where everybody dances with everybody), is still something very strongly discussed." (The members of CAOBA: Anton Mühlhofer on drums & percussions; Philippine Duchateau on piano; Markus Zahrl on saxes; and Stephan Först on bass / Photo © by Mónica Barrón)

Playing with Joe Zawinul (just him and me percussion) in the sold out „Wiener Konzerthaus“ (close to 2000 people) with just one informal rehearsal. I was so nervous, I thought I am going to die before I went on stage, but it turned out to be a great concert! He always demanded minimum 120% or he would eat you alive!! Another concert in the sold out „Wiener Musikverein“ (hall of the „New Years Concert", close to 2000 people) with Angel Romero (classical guitar player from Spain), me on Drums (plus piano and bass), without any amplification for the guitar!! At the beginning I thought, how is this going to work?? But suddenly the audience became so quiet, every bodies ears so sensible that it worked! But just one noise from your drum seat or picking up the brushes from the floortom could sound like thunder or lightning!!

With time I really wanted to do something authentic for myself: 1998 I recorded and produced my first CD “MI MUNDO“ in Santiago de Cuba (Studio Siboney / EGREM) which really was a huge challenge. For instance: I had to bring four 32 track tapes with me from Vienna-Madrid-Havana-Santiago as hand baggage plus bells etc., (nowadays just impossible!), the safest way in case a suitcase does not arrive. Absolute time pressure because I had to finish recording and mixing in a given time. Also other „details“ that easily could mess up everything (people that already were dealing with Cuba probably know what I mean). Also talking spanish and working in spanish are two different things. But what a miracle, it worked out very well and 2002 recorded my second album “SABOR NO TIENE COLOR“ there (big arrangements, what you would in style call SALSA here. My wife painted the front cover and took the photos. In both recordings, I was the only not cuban. Half of the compositions were my contribution. The year 2003, I founded my group „CAOBA“, playing Latin-Jazz (Cuban and Brazilian music with Jazz influence) and recording the CD „CAOBA“ 2017 with compositions from myself and two other band members. (cover painting and photos from my wife Mónica).

What touched (emotionally) you from your trips in Cuba? What are the lines that connect Cuban and Jazz music?

My first trip to Cuba was 1983 and many more followed (studying, recordings etc.). What touched me was, how close and „attached" everybody is to music (from nearly baby to very aged people)!! The way everybody dances -it is just unbelievable-! And when they play, it is just full power, even if the musician is very old, he gives everything, no show, if he might fall dead after the song, he would not care!! In spite of all their huge everyday problems, when they dance or just hear music, they forget everything.  Music is their best medicine!!! The lines of connection... In my opinion: Nothing! They can live without each other, but(!), they also combine beautiful with each other!! There is also a big mutual admiration. By the way, Cuban musicians also love and admire Brazilian music, because of the smooth and beautiful harmonies! 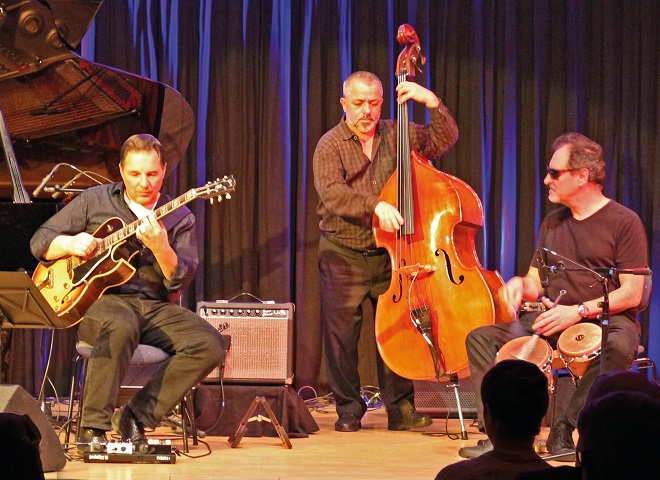 "My music philosophy: Energy!!! But watch out: It has nothing to do with playing loud, only if it is a loud style of music, go ahead, it´s fun!! If music has no energy, forget it!! This is for making and listening music as a form of art and entertaining, but might not apply for music-therapy in medical use." (Anton Mühlhofer, Joschi Schneeberger & Martin Spitzer, Vienna Austria 2015 / Photo © by Claudia Kruppa)

Another example: Travelling to Bolivia, to the family of my wife, a couple of times we went via Sao Paulo and now you cannot find Brazilian music on the airport anymore!!! What is this??

What is the impact of Jazz and Afro-Cuban music on the racial, spiritual, and socio-cultural implications?

For me there is nothing like that! Musicians want to live as good as possible(!) from what they do, and if possible, from the music they love to play! The rest nobody really cares. That is the reality which not everybody wants to admit and hear (it is too „boaring“...). Sure, if you want, or can make an issue out of it, call attention, which is good for business, everybody starts to philosophize…

Racial implications: The population in Cuba is very, very mixed! I love that. And race (color of your skin) is not a real topic. Your color in Latin/Salsa-concerts actually does not matter all over the world! The race issue in the USA (outside these concerts, where everybody dances with everybody), is still something very strongly discussed.

Did you see the movie „ORFEU NEGRO“ (1959)?? I would have liked to be part of the samba schools during that period!!! 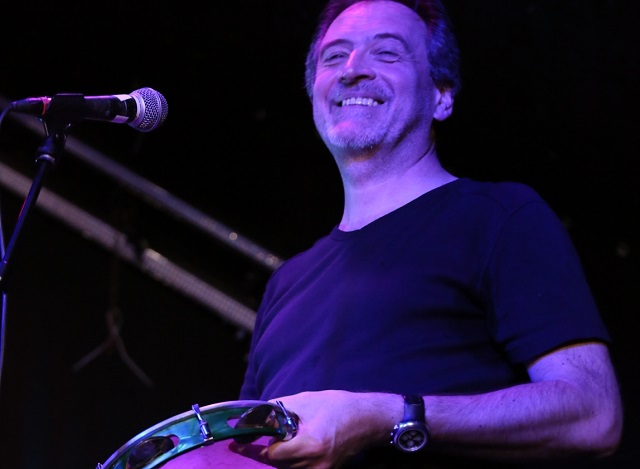