"Blake was a great visionary English poet. His line rang true for me, as I’ve indulged in plenty of excess in my time, and I feel now that I’ve been relieved of a hopeless state of mind and body, I should have learned something from the fun and games-and suffering!"

Blues Foundation “Keeping The Blues Alive” 2019 award recipient, Tom Hyslop since 1981, when he saw one of Muddy Waters’ last road performances, has been obsessed with the blues. It has been suggested that he has more CDs than most music stores or radio stations. Hyslop has been a staff writer and contributing editor for both Blues Revue and Blues Music Magazine. He has written liner notes as well as hundreds of CD reviews, and has conducted interviews with blues musicians for more than 20 years, with articles on Big Jack Johnson, Gary Clark Jr., Magic Slim, Rick Estrin, Nikki Hill, Nick Moss, John Németh, John Primer, Jody Williams, Li’l Ed Williams, and many others. Tom Hyslop has also contributed year-end best-of lists for Blues Music Magazine and Blues Junction Productions for several years.    Photo: Tom Hyslop 2019, Memphis TN 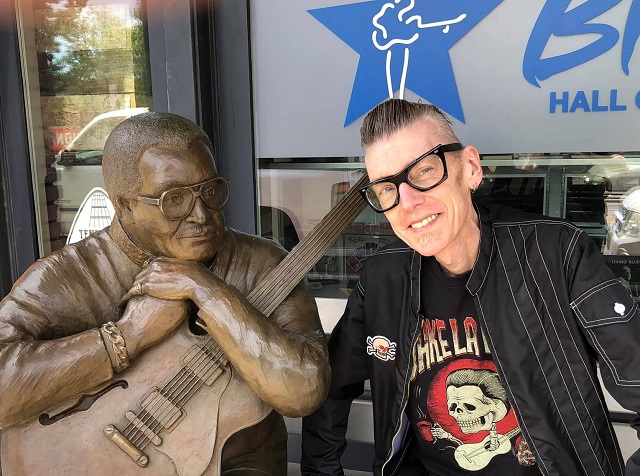 He has been a talent-buying consultant for the Marquette (Michigan) Area Blues Fest for almost all of its 15-year existence, and for a short time he booked a Marquette restaurant and club, bringing artists such as Johnny Rawls, Phillip Walker, Sean Costello, and Eddie C. Campbell, among others, to his very small hometown. Hyslop has also been a supporter of and organized two successful fundraisers for the Sean Costello Memorial Fund for Bipolar Research.

That’s a hard one to answer. I guess for a time that counterculture aspect colored my view of things. after that, I took things for what they were. If they were hip, I no longer worried about whether they came from youth or adults, squares or hip kids, etc. It was a phase before i found my own way and decided that it’s much better to have style than to be in style.

What were the reasons that you started the Blues researches? Which acquaintances have been the most important experiences?

Whenever I become interested in something, I want to learn as much as possible about it, whatever that takes. I’d say the most important friendships I’ve made and communities I’ve become a part of were with Sean Costello, Magic Slim, the Fabulous Thunderbirds, Nick Moss, and Anson Funderburgh. But it’s a very long list of wonderful people, and I’m so grateful to have had the opportunity to get to know so many of my heroes.

Are there any memories from your interviews with blues musicians over the years, which you’d like to share with us?

Yes. The format in which I most often was asked to present interviews really limited the scope of what I could include, due to space concerns. Most casual listeners and very few serious listeners have little concept of the number and range of aspects in which the great artists think about this music, from the effect of a bass line on a track to the similarity between songs A and B in the catalog of singers 1 and 2. Guys like John Németh, Rick Estrin, Kim Wilson, and Billy Flynn have devoted their lives to the music. We hear only a fraction of that coming off the bandstand. There’s so much to be drawn out in conversation. On a lighter note, many musicians have a trove of very funny stories that they aren’t always comfortable telling. This goes for younger performers, but especially for old-timers!

Some of the feelings most important to me that I hear less and less are a sense of subtlety, the wonder of discovery, and genuine personality. A true work ethic has been lost in many cases in music, as in so many. 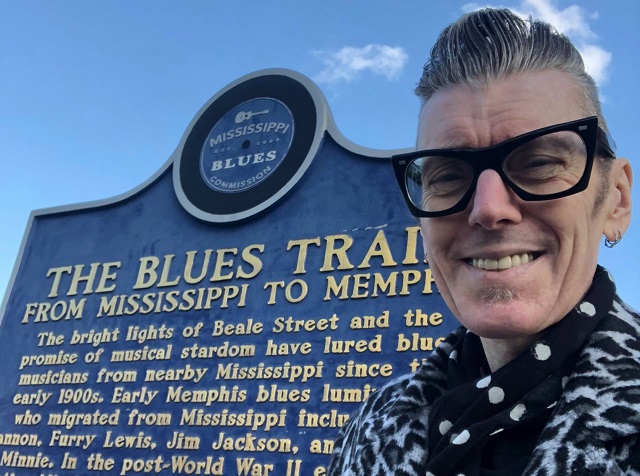 "In my time machine, I would like to follow a day in the life of Guitar Slim. Although Slim made some of my favorite music, there’s no known video footage of him. Based on some of Jerry Wexler’s memoirs, I would like a look into Slim’s own excesses and his music." (Photo: Tom Hyslop 2019, Memphis, TN)

Music, and live music, would reclaim the importance they once held, and move again from the background to the foreground of our lives.

What touched (emotionally) you from W. Blake's words: "the road of excess leads to the palace of wisdom”?

Blake was a great visionary English poet. His line rang true for me, as I’ve indulged in plenty of excess in my time, and I feel now that I’ve been relieved of a hopeless state of mind and body, I should have learned something from the fun and games - and suffering!

What are some of the most important lessons you have learned from your paths with the blues people?

I’ve found most of them to be straight shooters with big hearts. They take a lot of pride in who they are and what they do. The others, who don’t? I wish they’d get hip to the history of their music, honor it, and begin to play it correctly.

To answer this question and the preceding one, I’d like to direct everyone to my KBA acceptance speech, delivered in Memphis in January of 2019. You can listen to it on youtube: Pt1 KBA 2019 speech and Pt2 KBA 2019 speech.

In my time machine, I would like to follow a day in the life of Guitar Slim. Although Slim made some of my favorite music, there’s no known video footage of him. Based on some of Jerry Wexler’s memoirs, I would like a look into Slim’s own excesses and his music.