Q&A with Blues-Rock band Until The Sun, elements of various styles, but always have one foot in the blues

"Undoubtedly, it had a huge impact of bringing people together and transcending the racial problems of the past. There’s something tribal about music that supersedes superficial barometers of judgment. As a musician and songwriter, I want my music to do that indescribable thing that happens when you hear a song you love. To touch people's souls."

Until The Sun: Roomful of Blues Rock

Rocking Blues band Until The Sun’s new live album, “A Night at the Rhythm Room,” was recorded January 13, 2022 at the historic blues venue. The Rhythm Room, one of the last of the remaining old school blues clubs in the country, proved a fantastic stage to record the show. Until the Sun recorded ten songs consisting mostly of new material. The album has two covers, the Etta James classic, “At Last,” and the Led Zeppelin tune, “Whole Lotta Love.” Until The Sun played the slow blues song, “Burning Home,” first released off their second album, “Drowning in Blue.” All the other songs are new originals. The band gave a hard-hitting soulful performance that all the members were happy with. Larry Elyea at Minds Eye Studio recorded and engineered the show and the album was mixed and mastered at Minds Eye Studio. The show was filmed as well as recorded and the video will be released to YouTube when the album is out. Until The Sun features Brandon Teskey on lead guitar, Bruce Jensen on bass guitar, Chris Tex on drums, and Alyssa Swartz on vocals.                   (Photo: Until The Sun) 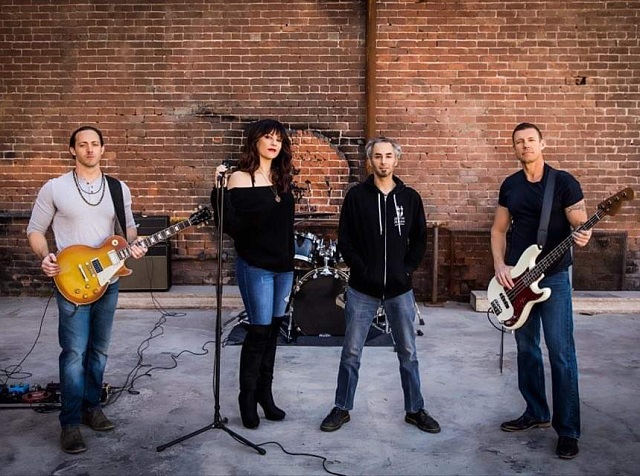 Until the Sun was formed in 2017. Their music includes and often fuses elements of Blues, Alternative Rock, Pink-Floyd-esque Psychedelia, and Jazz. Until the Sun quickly began playing national shows, has opened up for famous Blues and Rock artists, and has played world renowned venues. Until the Sun released their first album, “Blackheart,” in 2019 and completed their second album “Drowning in Blue” in 2021. Brandon, Bruce, Chris, and Alyssa all poured their hearts and souls into striving for what was before unattained levels of musicianship, songwriting, tone, performance, and reaching new levels of professionalism that continues to develop.

Brandon: The counterculture of the late 60’s did a lot of good things and some not so good things, in my opinion. I’m sure it probably influenced how I see the world indirectly in ways I can’t even imagine. This was all happening during our parent’s generation, and the western world defiantly experienced an awakening of many new ideas, not least of all being music. It grew out of blues, was adopted by a less culturally segregated England and sold back to America in the form of The Beatles, Rolling Stones, Cream and Led Zeppelin and the mainstream American cultural thought they were hearing something fundamentally new instead of a different take on what they already had. I think in the study of human civilizations, most experience some kind of counterculture movement every hundred years or so to some degree which moves it into a new paradigm. I think the public awakening of blues music which inspired rock and many more styles is one of the things that will transcend culture, trends, age, race, and borders and will outlive us all.

Alyssa: I didn’t really listen to blues music growing up. I listen to R&B and from that I was influenced to love the poetry that is music and from the singers I grew up listening to, the power and passion that came from their voice was so inspiring.

Chris: As far as counterculture goes, I really do not see any factors regarding blues or rock influencing my views. When I sit behind the drumkit and create unique music, it is soothing for me to connect with other people in sharing this love of music. Being a trained jazz musician, I often like playing the 12-bar structure and blues scale to generate a unique experience for those listening.

How do you describe band's sound, music philosophy and songbook? What is the story behind band's name Until The Sun? Where does band's creative drive come from?

Brandon: I think our sound is very much a blues rock sound. We bring in other elements of various styles, but we always have one foot in the blues. Everyone comes from different musical backgrounds. Allyssa comes from soul and R&B. Chris is a Jazz drummer with the attack of a rocker, and I come from a blues background. I like to think of our songs as different snapshots of the human experience. I’m not trying to directly push any philosophy, belief, or any political ideology. Sometimes we try and tell a story, express an emotion or paint a picture with the music and lyrics, but it’s all based on various aspects of the human experience. When we came up with the name, to some of us, it meant being in an emotional state of darkness waiting for a glimmer of hope. The night is dark until the sun, kind of thing. To others it just meant we were going to rock all night until the sun came up. It probably means something different to every member of the band.

Alyssa: The creative drive comes from everyone in the group; everyone has something different to offer. 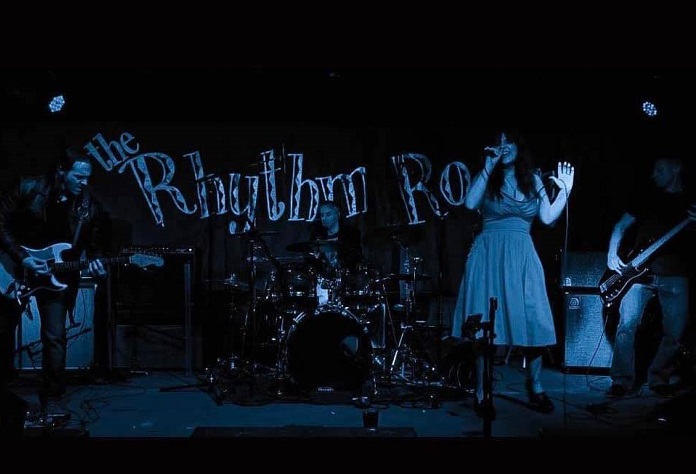 "I think if there is one thing I would change in the musical world, it would be to generate a universal collective mindset of how impactful and influential music is. Music allows people to feel a variety of emotions. It is this connection with people that I find is one of the main reasons I gravitated toward this type of art form." (Photo: Until The Sun at the Rhythm Room, Phoenix, Arizona)

Do you have any interesting stories about the making of the new album "A Night At The Rhythm Room”?

Chris: Since we recorded the show during the COVID-19 pandemic, it was great to share our music with people, especially since live music was minimal at that time due to the closing of a variety of music venues.

What do you miss most nowadays from the blues of past? What are your hopes and fears for the future?

Brandon: I miss many of the artists that we’ve lost. My hopes are that Until the Sun can provide a little of the musical inspiration, and impact that people who love blues and rock music are looking for. My fear is that music becomes less important to younger audiences.

Alyssa: I didn’t really listen to a lot of older blues music growing up. I loved R&B which does come from blues music along with gospel jazz and folk music. I only have hope for the future of blues music which is just to keep making amazing music that speaks to people's hearts.

Chris: I am more of an old-fashioned musician; I really like the simplicity of blues music from the past. Simplicity goes a long way in providing a broad experience for listeners. Since blues is a springboard for so many musical genres, I can incorporate a lot of my jazz training regarding 12- bar structures to provide a musical experience for listeners every night I am playing shows. I like how the melodies form over chords, as well as how it plays upon different chords and chord progressions. As a drummer, I like playing with pitch, whereby I can either play on the beat or based upon what the rest of the band is doing, I can play between notes to enrich the sounds. As far as hopes for blues of the future, I think I would like to see more local venues embracing blues-rock artists since this genre of music is what has modernized the music industry. The only fear I have is that blues-rock music is not as prevalent in the local community, therefore, playing with artists in the same genre is limited.

Alyssa: The same as anyone else if you got talent, get out there and show the world! 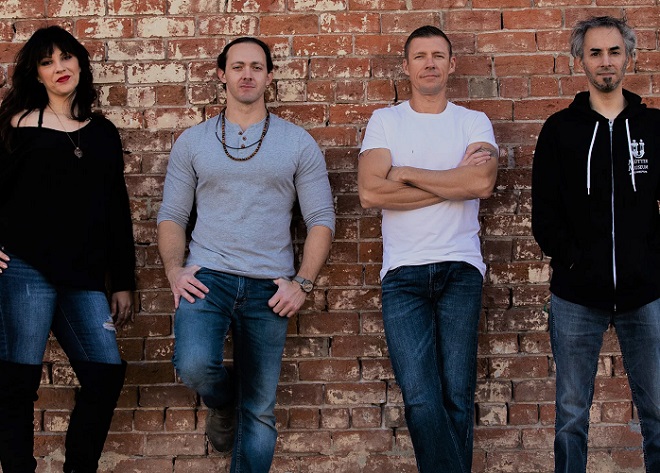 "When we came up with the name, to some of us, it meant being in an emotional state of darkness waiting for a glimmer of hope. The night is dark until the sun, kind of thing. To others it just meant we were going to rock all night until the sun came up. It probably means something different to every member of the band." (Photo: Until The Sun / Brandon Teskey, Bruce Jensen, Chris Tex & Alyssa Swartz)

Brandon: For me, I wish there was less of a disposable mentality to new music. It seems like people are less invested in new albums even from artists they love. As a result, it feels like many established musicians are just putting out new material that’s somewhat formulaic instead of waiting for something truly inspired.

Chris: I think if there is one thing I would change in the musical world, it would be to generate a universal collective mindset of how impactful and influential music is. Music allows people to feel a variety of emotions. It is this connection with people that I find is one of the main reasons I gravitated toward this type of art form.

What is the impact of Blues Rock music on the socio-cultural implications? How do you want the music to affect people?

Brandon: That is a question that’s kind of difficult to quantitatively measure. Undoubtedly, it had a huge impact of bringing people together and transcending the racial problems of the past. There’s something tribal about music that supersedes superficial barometers of judgment. As a musician and songwriter, I want my music to do that indescribable thing that happens when you hear a song you love. To touch people's souls.

Alyssa: When you’re going through something and you feel it deep inside, the right song can Move you, fill you up, break you down or build you up. As a singer I want people to connect with the story in the songs in their own way and find some healing in it.

Chris: I think because blues has modernized a variety of musical genres that are present today, it will continue to be a foundation for exploring and expanding human emotions that are present due to individual experiences. As the world continues to deal with the effects of the COVID-19 pandemic, blues-rock music serves a great purpose in acknowledging what the human experience provides in strengthening resilience. As a drummer, I have gravitated towards blues and have incorporated it with my jazz background to consciously add presence to the backbeat, especially in the way Until the Sun approaches their music catalog.

Until The Sun - Home 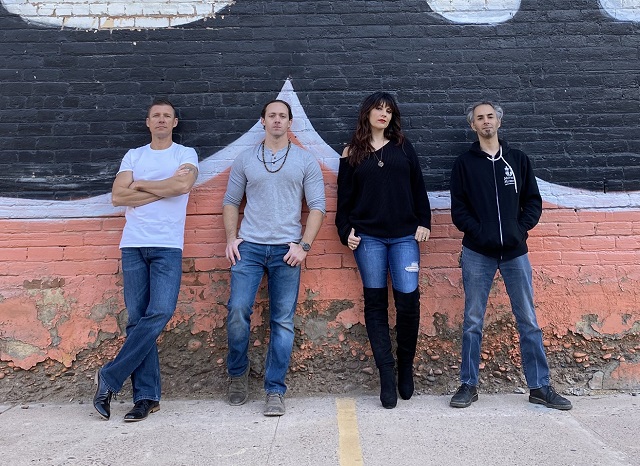 (Photo: Until The Sun)