"The most important lesson I've learned is to simply be respectful, humble, and kind, and never give up on your dreams! On the road, I never hear how nice a person is. It's always how terrible someone was to work with, and I would rather be known for treating everyone the way I would like to be treated."

Brooks Young & His Band saturate their songs with rock and roll edge and blues feel, going for a direct, emotional and powerful sonic blend. Brooks' searing guitar leads and soulful vocal performances lock in perfectly with the solid rhythm section, creating an inspirational and uplifting sonic texture along the lines of influential performers such as Eric Clapton and Dave Matthews. Boston-based Brooks Young has toured extensively throughout the USA, sharing the stage with icons such as B.B. King, George Thorogood, John Waite, REO Speedwagon, Pat Benatar, The Wallflowers, Boyd Tinsley of Dave Matthews Band, Byran Adams, Robert Cray, and many others...       (Photo: Brooks Young) 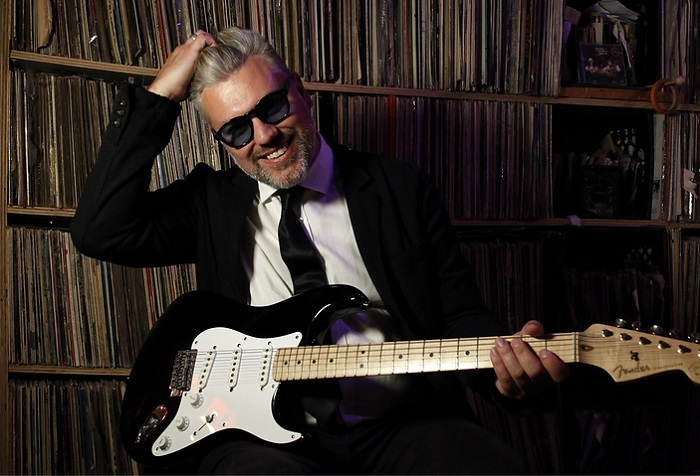 Supply Chain Blues (2022), Brooks Young's new 11-tracks album, brings the singer-guitarist around full circle, returning to the blues roots that spurred him to start playing guitar over 20 years ago. Nine of Supply Chain Blues' 11 tracks are blues or blues-descended classics, originally done by everyone from two of the three Kings and Howlin Wolf, to the Rolling Stones and Don Nix. But Young is not content to just render note-for-note covers, opting instead to subtly (and sometimes not so subtly) do things his way. While the core of the songs remain intact, his versions and inversions let him lay claim to them being his own.

Knowing the simple message of the blues, the hard work, and heartache from back when the blues were first born has carried its way to me since I was a young kid. I believe in living a simple life and understanding there will be ups and down in life is important to understand. I learned a lot from the lyrics and stories of the blues.

In my journey as a musician, I’ve dealt with many hard times and many heartbreaks which still sometimes hit me when I’m on stage and off and that sparks the emotion and energy that I bring to my performance.

How do you describe your sound, music philosophy, and songbook? Where does your creative drive come from?

I would describe my sound as a blend of my biggest influences but not forgetting to find my sound and I think that’s the notes that come from the heart. My influences growing up were Eric Clapton and BB King, and (non-blues artist) Dave Matthews, giving my style something unique.

My creative drive has always come from life experiences. Either happy moments in life or relationships and heartbreak. Music and playing guitar has always been my go-to outlier when going through hard times in life, mostly dealing with heartbreak. 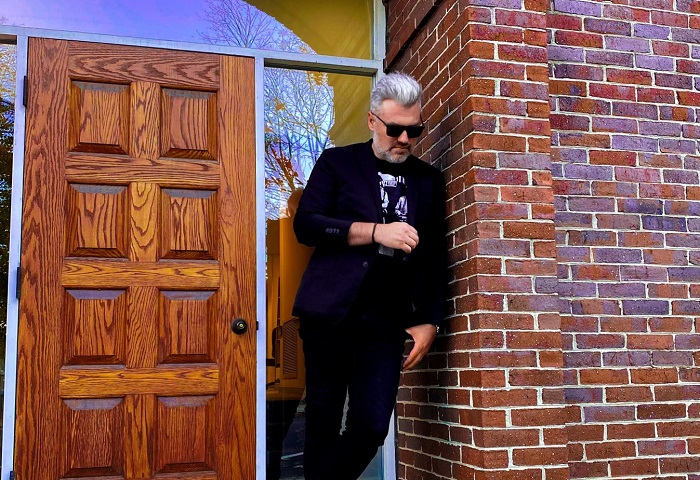 "Knowing the simple message of the blues, the hard work, and heartache from back when the blues were first born has carried its way to me since I was a young kid. I believe in living a simple life and understanding there will be ups and down in life is important to understand. I learned a lot from the lyrics and stories of the blues." (Photo: Brooks Young)

I would have to say, hands down, the number of times I was with B.B. King, opening for him and hanging out together. Those moments, from listening to him in my bedroom and watching DVDs of his live performances as a kid to then sitting next to the man himself, having conversations and opening for him were moments like you have to just pause and ask yourself 'how did I get here?'

B.B. and his band and crew were always kind to me when I was with them. One thing I learned from Mr.King was to be humble and kind, no matter how someone might treat you. That’s a lesson I try to live by today on and off stage.

The best advice I still remember to this day was from a promoter who told me only the ones who work hard and continue trying are the ones that succeed, so here I am today still going by that advice.

Blues has always been a part of my live shows, I play 'Hoochie Coochie Man' almost every night, and blues is the cornerstone a lot of my songs are built on. But this record is different, it's the first all-blues album I've ever done. I always wanted to make an album like this, revisiting some of the artists and songs that have played a huge hand in my musical development and career. I came to a point this summer where I had a large chunk of time available to go into the studio. I'd just turned 40 and had a few weeks off from touring; it felt like the perfect opportunity. I've been writing and playing pop and rock for over 20 years but blues has always been my go-to. I'd been playing a lot more guitar and felt really inspired to do it.

Blues has always been my go-to and, in some ways, this album is my way of giving back. When I got into blues I started with Clapton, but then I went back and learned about the artists who inspired him. I'm pretty sure there are people coming to see me play who've never heard these songs before, and maybe this will be an inspiration for them to go back and dig deeper. 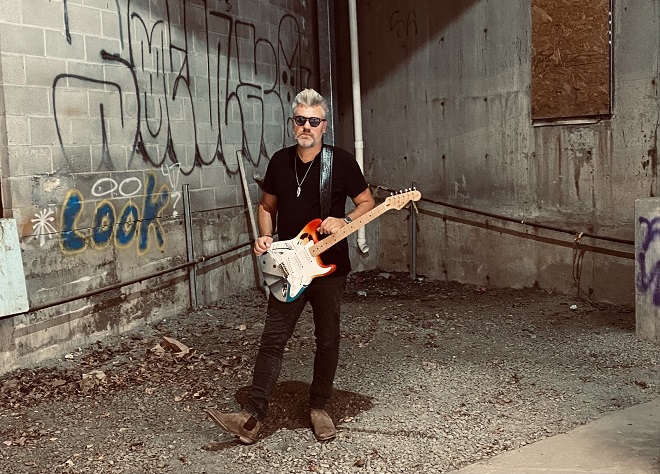 "My creative drive has always come from life experiences. Either happy moments in life or relationships and heartbreak. Music and playing guitar has always been my go-to outlier when going through hard times in life, mostly dealing with heartbreak." (Photo: Brooks Young)

Are there any memories from gigs, jams, open acts, and studio sessions that you’d like to share with us?

This first real moment of knowing I made it was walking into B.B. King's dressing room when arriving at the venue to open for him, hanging up my jacket next to his and taking out my guitar and tuning it up while next to BB's famous Gibson Lucille. It was a wow moment for me as I was finally where I always dreamed of as a kid.

Another memory I have was opening for Huey Lewis & The News. I remember Huey walking around the venue with me telling me how his grandfather used to perform there in a big band back in the day, and he was telling me how the venue was set up differently back in the day. Later that night, after performing one of his biggest hits, he took a moment to tell the sold-out audience how much he enjoyed my performance and thanked me in front of everyone.

What I miss the most is being able to walk into a local music store to physically purchase an album. Growing up, I would get so excited for an album release and always try to find ways to get the album before it came out on CD. I loved opening the album, seeing the artwork, and reading the liner notes. There’s something to say about physically owning an album compared to a downloaded file or streaming.

I fear it’s so simple to record music these days that the art of going into a studio and knowing how to truly play an instrument is close to being over. I hear so many AI instruments on recordings. Anyone with a midi keyboard and a few plugins seem to think they are a producer and musician. Don't get me wrong, I think it's great having a technology part of recording but I feel it's almost flooded with too many people recording and releasing music these days. 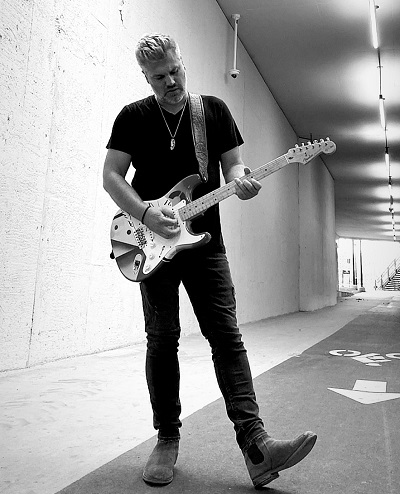 Wow, great question. Seeing as how I recorded this album during the pandemic, I feel the socio-cultural implications have reached the listeners, as well as the musician making the music, as life for us all, has changed in such a short time frame. I hope my music touches anyone no matter who they’re or how life has affected them in any impact. During the pandemic, Ruth Clapton and I recorded “Promises,” one of her dad, Eric's, notable songs. Ruth and I worked together across countries recording the song as we both dealt with living during covid. All I want to do is make sure my music touches people in a positive way.

The most important lesson I've learned is to simply be respectful, humble, and kind, and never give up on your dreams! On the road, I never hear how nice a person is. It's always how terrible someone was to work with, and I would rather be known for treating everyone the way I would like to be treated.

Why was the Blues never a part of the pop/popular music? What's the balance in music between technique and soul?

I don’t feel that’s true. I feel maybe pop artists in today’s industry don’t know, but if it weren’t for the Blues you wouldn’t have today's Pop music. Blues has been the root of so many genres of music. The balance is knowing your technique and letting your soul take over to make the true emotions come through with your music. Long as the technique is there the heart and soul can take over!