Q&A with Brazilian illustrator Butcher Billy - fresh approach, who loves to slice up ideas and imagery in popular culture

"The War of the Worlds. Wipe out human race and then restart the whole thing."

Brazilian designer, cartoonist, and illustrator “Butcher Billy” is an artist with a fresh approach, who loves to slice up ideas and imagery in popular culture and reassemble them in unique ways. Juxtaposing everything from Wonder Woman and the Watchmen to Morrissey and Breaking Bad, his work is ironic, humorous and very postmodern. His subtle questioning of pop culture using pop art as his medium is a juxtaposition in itself, yet in their own unique way all his images seem to make sense. In addition to his illustration work, Billy is a creative director in a digital agency. He lived in the UK for a while, and has travelled widely. With seemingly endless influences at his disposal – including Banksy, Steve Ditko, Shigeru Miyamoto, Malcolm McLaren and Andy Warhol - Butcher Billy never runs out of moods and concepts to explore. 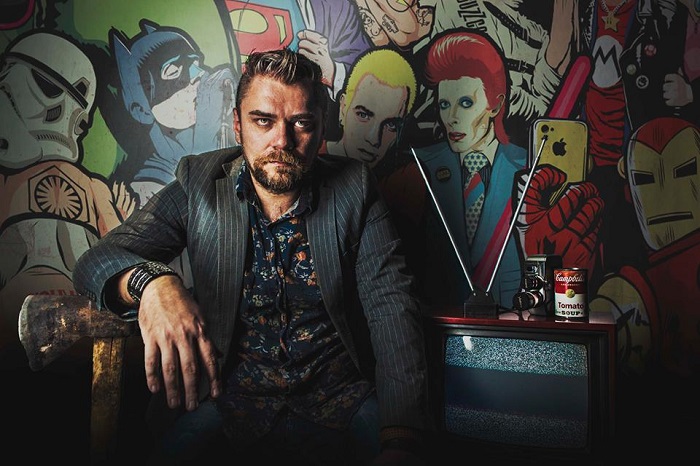 "I like to mix as many layers as I can in a work and them observe how people see and react differently to it. I take inspiration from filmmakers like Kubrick who prefer to leave the interpretation of his works to each viewer." (Butcher Billy / Photo by Coelho Visual Works, 2015)

Billy graduated in Graphic Design from the Pontifical Catholic University of Paraná, in Brazil. Butcher Billy likes to keep things simple. Initially he sketches out his ideas on napkins from sleazy bars, then moves over to his Mac to create a clean, clear image. He uses basic colours and strong forms - and a few graphic tricks here and there - for impact. Though he creates his work digitally, he’s absorbed by the typography, imagery and creative concepts of the 70s, 80s and 90s and loves the little imperfections of the pre-web era. He draws on nostalgia throughout his work. Pop art, with huge vintage influences coming from movies, games, comics, music, television and the arts. Butcher Billy’s images are often a mash-up of ideas, but the final executions are very cohesive and immediate, often using a comic book aesthetic and a strong colour palette.

What do you learn about yourself from the Rock n’ Roll culture? How does music affect your mood and inspiration?

I think much of the rock culture was responsible for how I've become so interested in cult icons. I remember been just a little kid in the early 80's and reading music industry magazines. I don't think I was even aware of the music yet but it was like if all of those singers and musicians were larger than life. Alter-egos, colorful outfits and legions of fans - almost like superheroes or movie characters. I really like songs that sound like soundtracks to my life - that's how it drives my mood and inspiration. That's probably how I relate music to cinema as well.

I was interested in comics since I can remember - grew up reading superheroes and then magazines like Mad made understand how to insert humor - irony, sarcasm - into art. What characterize my artwork philosophy is the amalgamation of concepts from medias as different as cinema, music, games, comics, art, politics, religion etc. I like to mix as many layers as I can in a work and them observe how people see and react differently to it. I take inspiration from filmmakers like Kubrick who prefer to leave the interpretation of his works to each viewer. "I think much of the rock culture was responsible for how I've become so interested in cult icons. I remember been just a little kid in the early 80's and reading music industry magazines."

I was about 12 or 13 when I first got in contact with the works of artists like Robert Crumb and Harvey Pekar. Probably a bit too young for it - not that I was allowed but at the time nobody around seemed to understand the concept of adult comics. However I must say that it really opened my mind as for the first time I was able to set apart counterculture from culture. And the content was so rich that from that I really went deep into that world - not just in comics but cinema, music, poetry and literature as well. So it was pretty much responsible for shaping my upbringing as a teenager and consequently my adult life.

I'm probably constantly drunk with nostalgia or otherwise I simply stopped listening to new music since 1997. I appreciate and draw inspiration from movements like punk, post-punk, new wave, grunge, britpop - and the very last creative breath that was the early 90's rave culture. Interestingly some of these musical waves started in Manchester through the legendary Factory Records - a fact I didn't even realize when I started listening to them. I just hope there will be another interesting musical movement in the future that I find interesting enough to inspire me as an artist.

I'd prevent the birth of Vanilla Ice. Or I would stop the murder of Kurt Cobain (yes, I believe that). Not that he would have kept making music - I think he would have stopped anyway. But it would be nice to see him finding his peace by stepping out of the limelight and get back to been a happy homeless again. 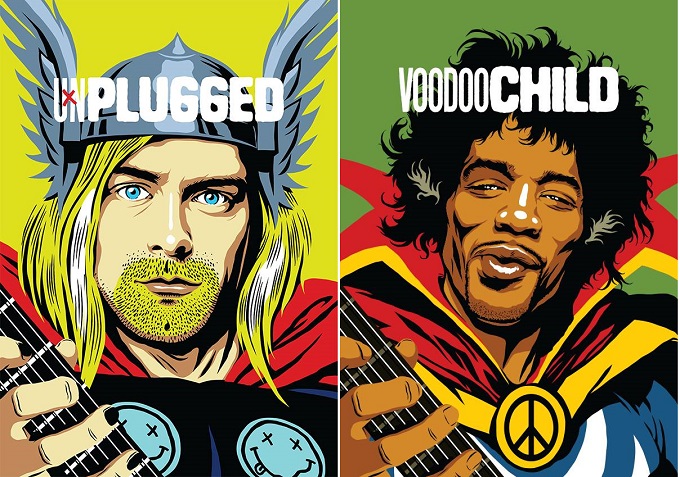 "I was interested in comics since I can remember - grew up reading superheroes and then magazines like Mad made understand how to insert humor - irony, sarcasm - into art."

What has made you laugh from the American Super heroes? What touched (emotionally) you from Cobain’s music?

The fusion between reality and fiction is a recurring theme in my body of work. The incorruptible ideals of perfect superheroes as opposed to the human flaws and desires sometimes so desperately depicted in song lyrics.

These are both cultures that impact the youth mainly. So that means everything for the future.

The War of the Worlds. Wipe out human race and then restart the whole thing.

I'd take him out to the Korova Bar and have a few Moloko Velocets. That would sharpen us up and make us ready for a bit of the old ultraviolence.

I'd ask Bowie what the hell he was thinking when he wrote 'Oh You Pretty Things'. Aliens? Jesus? Alien Jesus?

I'd ask Batman to please stop with the whining. You're a millionaire. Come on, live a little.

Let’s take a trip with a time machine, so where and why would you really want to go for a whole day? What memorabilia (books, records, comix, etc.) would you put in a time capsule?

Surprisingly I wouldn't go to the past. Let's go 50 years into the future. That'd be interesting to see. Especially what would be Butcher Billy's legacy.