Q&A with illustrator Alex Gamsu Jenkins - seeks to turn the 'mundane' through of surrealism, humor and color

"Comix like Zap for instance had a silliness and almost innocence about it in its humor but also an adult and disconnected undertone."

Alex Gamsu Jenkins is a freelance illustrator living and working in South East London. Satirical in nature, his work seeks to turn the 'mundane' on its head through the employment of surrealism, humor and color. Cartoonist Alex Jenkins describes his work as “exploring satirical and critical subject matter through a distinctive and vivid style. I try to avoid the pretense but wallow in humour, whilst touching on the absurd and surreal.” It was the energy and bright color palette that first caught our eye, on closer inspection the more complex, often more unsettling, themes in his work become readily apparent. Alex studied illustration at Camberwell College of Arts. 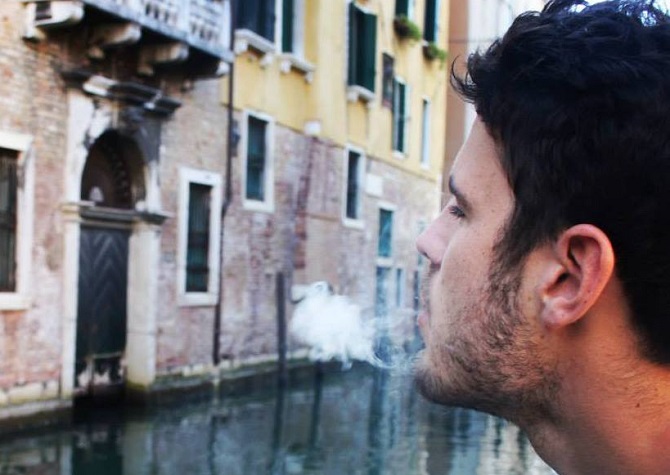 The work of Alex Jenkins looks like an acid trip. There are car crashes and police shootouts, goblins on Grindr, violent swans, and Greek mythology gods in all-out orgies. The colors - such as lavender cactuses, peach skies, and mauve, phosphorescent forests - also add to the illusory feel, as does Jenkins’ dots and squiggly lines, which make each scene appear as if it’s in motion. Alex’s commercial work has appeared in Society magazine, Timeout London, Vice, Hustler, and Mixmag, but his personal work reveals a far less compromising approach, he describes as “fun with slight strands of comic grotesque.” Having studied the likes of Bruegel and Bosch at college, Alex is keen to explore narrative and drawing in a similar way.

What do you learn about yourself from the art of comix? What touched (emotionally) you from satire and humor?

I guess it’s always nice to find things that touch you or you can connect with in a humouress way, and then you instantly find a attraction/connection. Comix like Zap for instance had a silliness and almost innocence about it in its humor but also an adult and disconnected undertone.

I got back into illustration when my uncle gave me a book on Robert Crumb and I was mind blown. For the first time I saw a version of art/illustration that mixed absurd humor, grotesque themes and fantastic drawing technique.

I guess producing illustration can act as a valve that questions certain things that you disagree with in life. "I'd hang with Gilliam, take drawing tips off Crumb and all this would happen in one of De Chirico’s every long shadowed dream-scapes." (Artwork by Alex Gamsu Jenkins)

What do you miss most nowadays from the comic of past? What are your hopes and fears for the future of?

Theres not a lot I miss. It’s probably a lot more saturated now in terms of choice and not such a niche thing.

What has been the relationship between music and comic art in your life? How does music affect your inspiration?

Of course I like to listen to music as I draw, but I am not so sure if it directly informs my drawing. May it does subliminally.

If you could change one thing in the musical and comic world and it would become a reality, what would that be?

You can say a lot through what you draw or what music you create. Hopefully it can reach a large audience.

What has made you laugh from the TV news? What do you think the major changes will be in near or far future of the world?

The U.S presidential election is pretty unreal. It seems like a petty ridiculing battle between two candidates who are scrapings from the barrel. "I got back into illustration when my uncle gave me a book on Robert Crumb and I was mind blown. For the first time I saw a version of art/illustration that mixed absurd humor, grotesque themes and fantastic drawing technique." (Artwork by Alex Gamsu Jenkins)

I'd hang with Gilliam, take drawing tips off Crumb and all this would happen in one of De Chirico’s every long shadowed dream-scapes.

Where would you really want to go with a time machine and what memorabilia (books, records, comix) would you put in?

I’ve always liked the idea of going back in time to say 1066 when the Normans were invading Britain, but I’d go back in time with an apache helicopter. They would have a clue what this metal flying structure was and it’d be interesting to see the changes in history through witnessing this.