"Blues music is now a universal language which is a great thing. While real Feeling and expression is often hard to find it is easy to recognize and the same goes for music. In a world where truth seems to be hidden, authenticity is often overlooked. But we continue to believe truth will out, thankfully."

Dave Ellis: Blues From the Heart

Dave Ellis is a charismatic British guitarist, vocalist and composer. Dave Ellis Blues Band (Jerzy Janik on bass and Slawny Pushkin on drums, both from Poland) make the Blues ...Rock straight from the heart. Continuing 35 years of touring. Performing material from pre-war era Delta Blues through to contemporary Blues, Dave Ellis and his three-piece Band perform a Texas, Chicago, British hybrid Blues/Rock. Jimi Hendrix, Stevie Ray Vaughan and Buddy Guy remain Dave Ellis’s greatest influences. He also performs as a Duo with various partners, and as a soloist, featuring acoustic, electric and Resophonic guitars. Having performed various European Tours including numerous Tutorial Guitar Workshops, Festivals, and Concerts from U.K to Chicago to eastern Europe. Dave Ellis is continuing to play the Blues and evolve his prestigious talent. Dave Ellis delivers blues that is gritty and straight up. Nothing is mixed or cajoled into a corner, this is blues guitar that pierces through the gravel tone vocals as the Dave Ellis Blues Band delivers electric blues. Their new live album titled "Unleashed in the East" (2020). 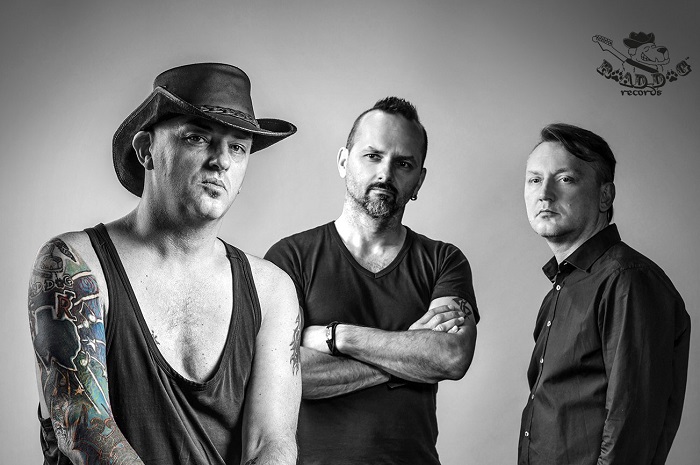 Dave says: “I started playing guitar in the late 1970’s after discovering Jimi Hendrix and like countless others before and after... decided the guitar was for me one hundred percent, having a great interest in Jimi gave way to me discovering where his influences had come from in the Blues and beyond. Always keeping the influences of Jimi and Stevie Ray Vaughan unashamedly clear in my playing, for me to be acknowledged as a guitarist and singer keeping the spirit alive is a great thing,  I have toured, performed and taught guitar in U.K to Chicago Illinois, and eastern European countries in recent years including Poland, Estonia, Lithuania, Latvia, Belarus, Russia, Czech Republic, Ukraine, and Belgium, Germany and Spain. You may have also seen me performing as a duo with Papa George, and as guest guitarist with ex Groundhogs, Egypt.”

How has the Blues and Rock counter culture influenced your views of the world and the journeys you’ve taken?

Most of the time because of the  great musicians that have come before me, that opened and changed the worlds perception and understanding through musical communication I feel as free as the breeze, and I think all musicians especially those that are able and choose to improvise each time they play live as do I dependent on how I feel ,are blessed to follow in their footsteps .I'm thankful for the opportunity to be able because of them. only recently I watched again Jimi's superb performance at Monterey, and as a point in case on many levels all of us guitarists owe so much to be afforded the level of freedom of expression we have musically now because of his genius. I choose to not play the same each time I play. That is a direct result of the influence. I don’t think I would have picked up a guitar if I hadn’t have heard Hendrix, that is how much the counter culture Influenced my life. My mileage credentials are stacking up. It is an honor to travel, perform and be shown genuine respect playing my Blues.

How do you describe your sound and songbook? How do you want it to affect people?

Blues from the heart is a catchphrase I’ve picked up on lately, I’m telling it like it is, direct. There are no half measures in my lyrics. I play every concert as if it were my last these days, I have to give everything as is the tradition and people feel it when you do. I want them to know I am honoring my favorite guitarists in my way, and leave knowing my name, wanting more.

Which meetings have been the most important experiences for you? What was the best advice anyone ever gave you?           Dave Ellis / Roman Papazyan photography 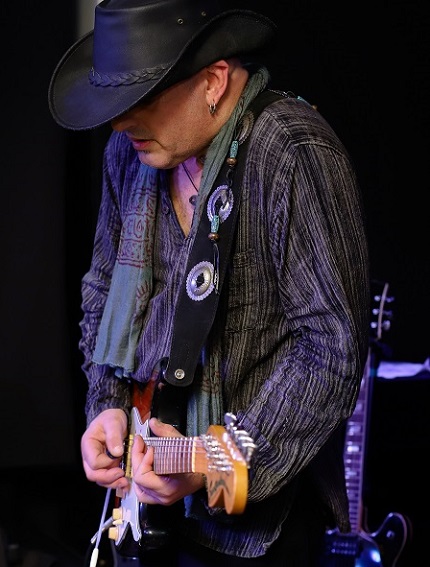 Meeting Buddy Guy and playing in legends is still a big one and having his approval that was cool enough for me, a lot of kudos came from that. I met Papa George 26 years ago where we were both playing a UK Blues Festival, he is still superb in my opinion.  We started Duo gigs not long after and I guest occasionally when I get the chance with the PAPA GEORGE BAND. I have learnt so much from him, always a great honor to make music with. I would have to say the best advice I was ever given back in the 1980’s was “always PLAY FROM THE HEART” given from yet another excellent Blues guitarist and friend, sadly missed John Slaughter.

I have a million great memories from gigs. The last concert that I played was in Moscow, during my British Blues invasion to Russia ‘19 tour going into Jimi’s Third Stone from the sun on a moments notice unplanned from Little wing was beautiful and brutal at the same time. That level of sonic destruction at volume is a spiritual experience for me.

One of the best things that happened during recording of my album” STRAIGHT UP” in Poland was that moment when you realize you have something worthy; First play back in the studio was a killer moment for us. To capture the moment of spontaneity is not an easy task, you have to believe, I would say we have a psychic connection between the three of us in D.E.B.B

I truly think that the current younger generation are being almost force fed the wrong idea behind being a musician. It’s not about being a public celebrity for just long enough to make a million bucks. It has never been about money for me. Music is the highest, purest form of communication. I fear that real venues in the U.K will continue to close if the situation stays unbroken. On a positive note real bands are still out there you just have to know where to find them. My friends Ex ground Hogs Egypt are Excellent and continue to kill it wherever they play. A superb mix of psychedelic Blues Rock.

Well I would have to say honesty is something that there is not enough of in the business side of things, however forty-five-minute bass drum sound checks could do with a re think too whilst we can dream on.                 Dave Ellis / Roman Papazyan photography 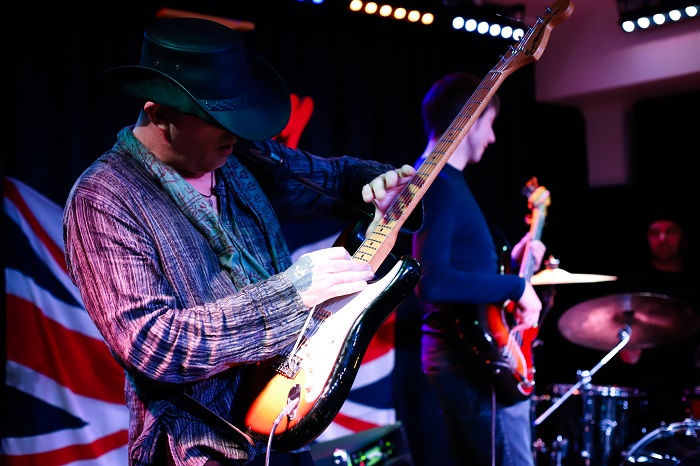 "Blues from the heart is a catchphrase I’ve picked up on lately, I’m telling it like it is, direct. There are no half measures in my lyrics. I play every concert as if it were my last these days, I have to give everything as is the tradition and people feel it when you do. I want them to know I am honoring my favorite guitarists in my way, and leave knowing my name, wanting more."

What were the reasons that made the UK in 60s to be the center of Blues Rock researches and experiments?

A natural progression occurred. England has been influenced by America for decades Before the sixties, so the styles and fashions followed, and the music grew from the ground up. Cream were the first power trio and, in my opinion, wrote the book on the power trio format until Jimi changed the boundaries yet further, especially with the Band of Gypsies. Also, never to be overlooked was the fact that John Mayall had the Finest British Blues guitarist ever Peter green, still to this day his recordings from that decade are untouchable in their finesse.

Make an account of the case of the blues in the UK todays. What touched (emotionally) you from the local circuits?

It takes a lot to impress me musically and for me the best I mentioned previously. Luckily, we still have visits from Robin Trower who is also a firm favorite of mine.

For me personally I feel that we have moved on in some positive ways, yet negativity remains. Blues music is now a universal language which is a great thing. While real Feeling and expression is often hard to find it is easy to recognize and the same goes for music. In a world where truth seems to be hidden, authenticity is often overlooked. But we continue to believe truth will out, thankfully.

Now this is a daydream, I would have loved to be at the Haleekala crater During the Rainbow bridge concert from Jimi Hendrix Maui Hawaii 1970, just hanging with Eddie Padilla from the Brotherhood, now that …would have been something truly Beautiful. 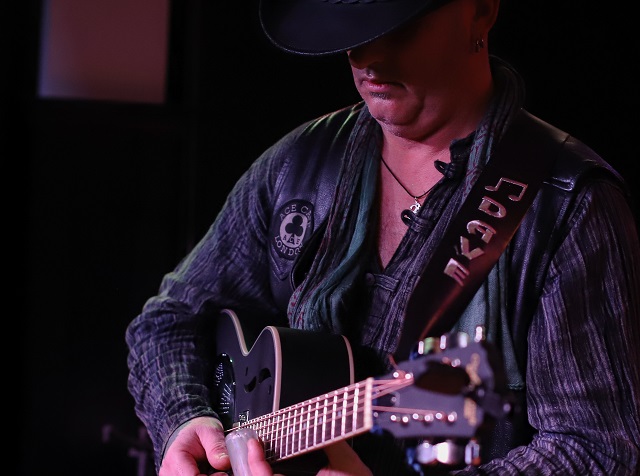