"If you are true to yourself and really know yourself as an artist and know what you’re laying down is the real deal, then you rise above all the noise and the crap that’s involved."

Ivan Elmo "Buddy" Reed got his start playing the blues in San Bernardino, California in the ‘60s. Buddy, from Rialto, CA, is indeed "the real deal." Alongside George "Harmonica" Smith and he played in the house band at The Small Paradise (aka "Smalls") in Los Angeles in the late 60's, backing up Lightnin' Hopkins, J.B. Hutto, Pee Wee Crayton and many others. The band toured nationally with Big Mama Thornton, sharing the stage with Muddy Waters, John Lee Hooker, Jimmy Reed, Howlin' Wolf, T-Bone Walker, Bo Diddley, Johnny Otis, John Hammond Jr. and more. Under the name Bacon Fat, the band toured overseas and recorded five albums produced by Mike Vernon for the Blue Horizon label. He made a few albums with Bacon Fat and worked backing blues/rock legends including Little Richard (which is why he calls his back-up band The Rip It Ups). After a stint in Little Richard's band, Reed struck out on his own. Working as a trio, Buddy Reed & th' Rip It Ups played saloons and roadhouses of the Southwest for the next 25 years. 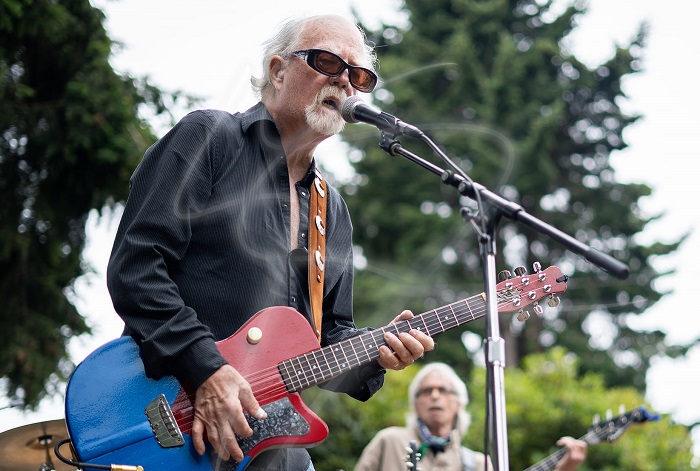 Reed's recording with the late great harmonica player George "Harmonica" Smith, Teardrops Are Falling: Live in 1983, was nominated as "Historical Album of the Year" in Blues Foundation awards. Singing and playing with a sweat drenched intensity rarely matched by his peers, Buddy Reed never gives less than 100% on stage. His guitar style reveals the influence of Hubert Sumlin, Tampa Reed, Arthur Crudup and slide masters Muddy Waters, Elmore James and J.B. Hutto. His repertoire reflects his love for early rock & roll, including songs of The Coasters, Bo Diddley, Chuck Berry, and Jerry Lee Lewis. His originals speak of the hard life of an uncompromising blues veteran. Buddy has recorded with Jimmy Rogers, Clarence Edward, Jimmy Dotson, Louisiana Red, Cheif Schabutte Gilliame, and James Harman. Buddy was inducted into the Arizona Blues Hall of Fame in 1998.

As an artist, the blues and rock counterculture has broadened my perspective of what is possible and important to me personally. For example, it’s shown me as a White player that I could interpret a black art form with complete authenticity and conviction.

Why do you think that Buddy Reed music continues to generate such a devoted following?

I believe Buddy Reed (Blues) music generates a strong, continued following because it’s presented in a raw and emotional simplicity that people relate to.

Why was the Blues never a part of the pop/popular music? What’s the balance in music between technique and soul?

Actually, blues was part of the American pop/popular music scene in the 50’s and early 60’s because Jimmy Reed, Bo Diddley, John Lee Hooker, and Howlin’ Wolf had hits on national and international AM radio. It just wasn’t known as blues per se. Other artists at the time; Little Richard, Chuck Berry, and others were heavily Blues influenced, but they were a small fraction, (of the actual blues guys) of what was being played in those days. The emergence of the Rolling Stones in the mid-60s broke the blues scene wide open. Their first two or three albums were practically all Blues covers.

Mike, I believe the balance in music, and especially blues, between technique and soulfulness varies from artist to artist. In my opinion soulfulness is something you are born into. Some cats got it, some others, not so much. Technique is something you develop over time with devotion and hard work. Personally, I prefer to listen to the more soul driven ones, I count myself as one of these, rather than someone who is technically proficient. 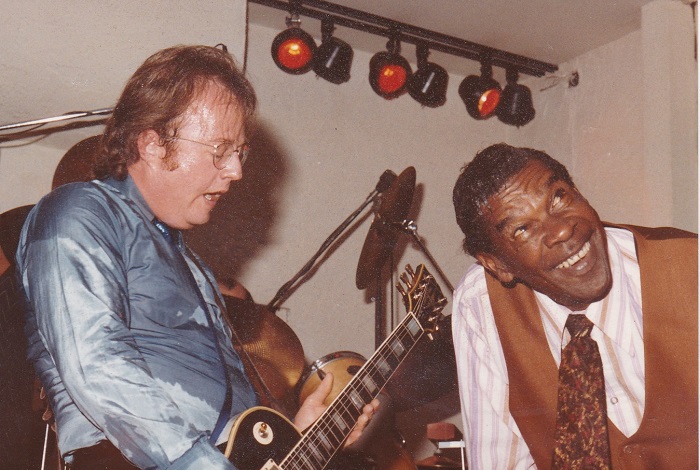 Are there any memories from The Small Paradise backing up Lightnin’ Hopkins, Pee Wee Crayton, and many others which you’d like to share with us?

We started playing the Small Paradise or “Small’s” when we became George “Harmonica” Smith’s back-up band in 1969. It was quite an experience for a White boy from Rialto, who had hardly ever been around any Black people at all to find myself all of a sudden Boom! Right in the middle of the Watts district of Los Angeles! Culture shock to say the least! This was not long after the Watts Riots. I had no idea what to expect, neither did they until we started playin.’ George could play the piss outta Little Walter and so could we. We were quite the novelty, the only White faces down there. They absolutely loved us! From the 1st night on! We were the house band there Friday, Saturday, and Sunday for years. The place was located at 53rd and Avalon. It was owned by “Stevo” Small. Every one of the regulars were absolute characters! Ha! They had names like Black Hattie, Black Tommy, Slim, Queenie, C.W., etc. They were the warmest, funniest, most accepting bunch you’d ever want to meet. Then you had the regular sit-in musicians, we backed up Pee Wee Crayton (a sharp little cat), Shakey Jake, Big Joe Turner, first time I backed up Big Mama was there. When John Lee Hooker was in town he’d come in and we’d back him up as well as Lightnin’ Hopkins. Drinkin’ and dancin’ all night long! What a blast! After a while our crew started coming in. I bet it was the only racially mixed place in Los Angeles at the time. My wife at the time, Erika Reed, even started bartending there. A wonderful experience all the way around!

I guess the hardest obstacle for me personally and professionally as an artist has been my alcoholism and drug addiction. What better environment for a drug addicted, alcoholic than playing in bars. It caused me to lose everything and everyone I hold near and dear to me and almost my life. I’ve been clean and sober for 45 years! I didn’t want to die, which wouldn’t have been much further down the road I was on. And most importantly, I didn’t want my new baby girl, Ruby Nadine Reed, to have a drunk for a father. I was backed up against the wall and didn’t know where to turn so I got down and prayed. Hard! Pretty soon things started falling into place that allowed me to quit. I stopped it all cold on my birthday, June 18, 1978. Through it all I never stopped playing. I’ve always been very spiritual, that’s where that soulfulness comes in and I have never had a doubt that I was born to play the blues. They say if it doesn’t kill you, you come out on the other side stronger than before. So, since we’re a sum total of our experiences, I’d say yes it’s made me a stronger performer on this guitar. 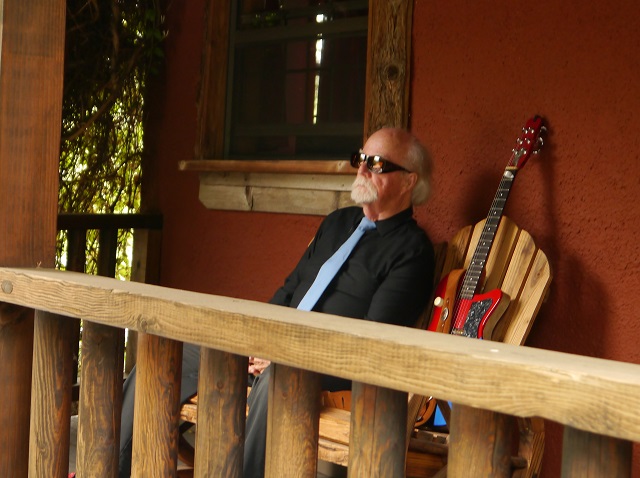 "I believe the balance in music, and especially blues, between technique and soulfulness varies from artist to artist. In my opinion soulfulness is something you are born into. Some cats got it, some others, not so much. Technique is something you develop over time with devotion and hard work. Personally, I prefer to listen to the more soul driven ones, I count myself as one of these, rather than someone who is technically proficient." (Photo: Buddy Reed)

Are there any specific memories or highlights with Bacon Fat and Mike Vernon that you would like to tell us about?

My time with Mike Vernon was incredible. Looking back, I didn’t realize it so much at the time, but I came away with a lot of respect for Mike. He owned Blue Horizon, one of the most important blues labels in Europe. When we signed with him I thought it was pretty damn cool considering all the great British acts who were on that label. I think we were the only American act on there at the time. For me, the most important highlight of that time (early 70’s) was when he decided to record us separate from George. I think we were goin’ as the George “Harmonica” Smith Blues Band. Without George, we didn’t have a name. So, there we were in the studio and had to come up with a name and I came up with Bacon Fat. Everybody said “yeah, that’s it”. It was from an old 45 my sister had by Andre Williams. So that’s how Bacon Fat came about. It was also my singing debut in front of a band on “Transatlantic Blues and Jivin’ the Business.”  The other highlight for me is when we toured England with Mike. It was me, Rod Piazza, Richard Innes, Jerry Smith, Greg Schaefer, J.B. Nicholson, and George. We played all around London and places like Bexley, Hull, and Plymouth. We played the Cavern Club in Liverpool. I saw my old buddy John Peel at the Marquee Club in London. One day on our way to a gig, we drove right by Stonehenge! Me and Richard hit the war museum and natural history museum in London. I’ll never forget it. Ok, one more thing I remember is that we almost got into it a few times on the gigs. We’d open up then call George and J.D. up. Well, some of the smart-ass punks in the crowd would start yelling shit like “c’mon we came to see artists, not the hangers on”! Ha! All fueled by that thick black Guinness beer they had over there. Seems they didn’t consider us as the real thing, ‘cause we were White. LOL. I would tell ‘em “Fuck you limey assholes”! Ha! Ha! Things would get a little tense but then George and J.D. would come on and we’d rock the damn house! Lots of fun man! 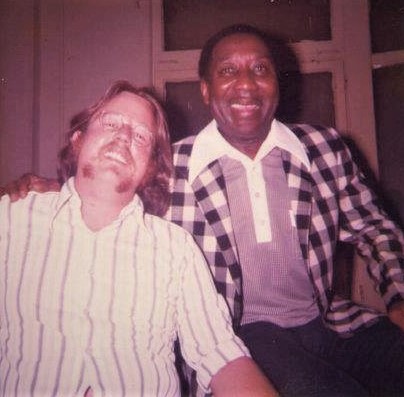 I think some of the most important things I’ve learned from my 50-some years doing this has been not to be too materialistic. You ain’t gonna get rich playin’ the blues. It’s a poverty-stricken struggle most of the time. There is back biting, favoritism, and jealousy to deal with as in most art forms. If you are true to yourself and really know yourself as an artist and know what you’re laying down is the real deal, then you rise above all the noise and the crap that’s involved.

John Coltrane said “My music is the spiritual expression of what I am…” How do you understand the spirit, music, and the meaning of life?

Mike, when Coltrane said “My music is the spiritual expression of what I am” that pretty much says it for me. I’ve been doin’ this for so long that I’m completely defined by it. Anyone who knows me, and that’s a lot of people, know what I am, a blues cat who’s stabbed in the heart by the blues. I’m proud to say it defines my life and gives it meaning and direction. Next to my kids and sweethearts, it is my life and the most important thing in it.