"The best music should reflect the culture as well as move it forward in a positive direction. I want the act of sharing our music to "move" people physically and emotionally. If we can touch the audience, get them grooving and give them a positive experience that they remember or has affected or inspired them in some way we will have done our job."

Based in Canada Waterstreet Blues Band's new album "Talkin About" (2021) delivers original blues with a rockin' party groove - with a gritty rootsy vibe, a haunting ballad, some jumpin' swing, or a spicy latin rhythm - all topped off with a bonus holiday original! The album "Talkin About" is original music and well crafted covers, always rooted in the blues. Turn up the volume and feel the full driving beat of the title track, then continue your journey with the second single: Miles to Go, a rootsy cover of a tune by Samantha Fish. "Vodka Drinkin Woman" makes you wonder if you're back in the USSR or in a blues club watching the legendary Howlin' Wolf. Riverside Child tells a compelling personal story that moves through misty enchanted adventures along the riverbanks with a “mind on a getaway."                          (Rob Deyman & Paul Sapounzi / Photo by Ken Wallis) 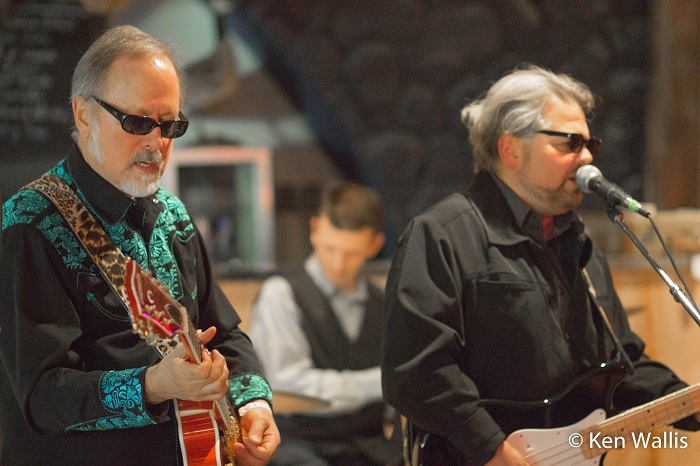 How has the Blues and Rock n' Roll Counterculture influenced your views of the world and the journeys you’ve taken?

Rob: From the moment I saw BB King, the Beatles and the Rolling Stones on Ed Sullivan I knew I wanted to play and perform music. I think the blues and rock and roll countercultures are quite different though. The rock culture was in its early days all about rebellion, being different especially from your parents and the institutions of the time, focused at times on social change or social issues as well as sex, drugs and itself until it became so commercialized that it became THE Institution and worshipped at the altar of commerce. There were points when it tried to break out and rebel again, for example punk, early hip-hop, but these forms quickly became glossed and tamed. Blues on the other hand, born out of the unique and agonizing experience of the enslavement of African Americans is a very honest and direct music that tells stories of pain and joy in equal measure. Rock and roll has infused me with a healthy critical view of society and the blues has heightened my empathy for the honest stories of people of all kinds.  Musically rock n roll initially drove my desire to play music and blues has inspired me to play honestly and directly.

Paul: How can something so beautiful and elemental as blues with all of its branches of genres of music have its roots in so much adversity and tragedy? Studying, playing and building on the genre with new original material is our creative journey toward answering this question.

How do you describe band's sound, music philosophy and songbook? Where does band's creative drive come from?

Rob: Waterstreet Blues Band uses the blues form and takes parts of all our influences to explore different musical pathways along the way. Our songs often contain bridges referencing Paul's love of the Beatles writing, Latin or New Orleans feel referencing Silvia's musical roots or roots rock lines referencing my background. Our songbook contains our many original songs and a variety of choice covers at times done very similarly to the original and at other times done quite differently, for example the use of accordion on Samantha Fish's Miles to Go and the Latin break on Tom Waits' Temptation off our recent album Talkin' About.  We write very collaboratively, sharing ideas and lyrics and the subject matter of our writing most often flows from real or observed experience. We also like to have fun with our music as evidenced by the tunes "Vodka Drinking Woman" and "Laugh to Keep from Crying" from the new record.

Paul: The original music is very much a conversation with our heroes. Writing blues is a real process of listening and building on a prolific legacy of constantly changing but familiar patterns, reinterpretations and original creation. Searching for stories that are relevant and personal to us and our community is the greatest and most rewarding challenge we happily face. 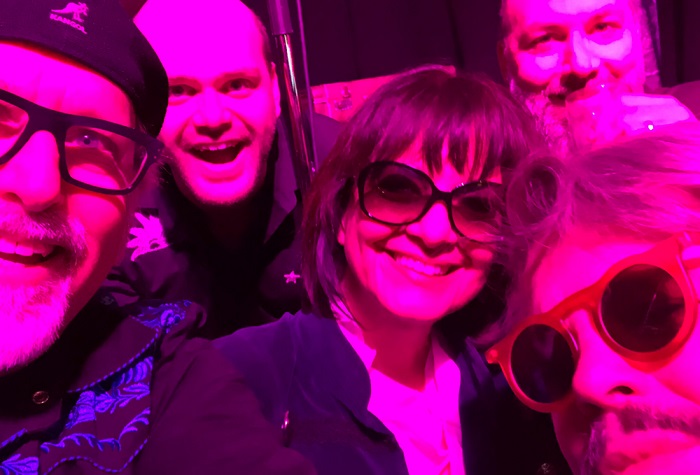 "We have a faithful following of wonderful people. They somehow bring them together in the same real and virtual room in a way that nothing else can. Music build community and the Blues community is alive and well!" (Photo: Rob Deyman; Paul Sapounzi; Silvia Dee; Jonny Sauder & Chris "Junior" Malleck)

Rob: In our early days, we were the house band for a few years at a real dive bar that had an unbelievable cast of real characters with names like the "Snake Lady" and "Bat Boy".  On the night of our first paid gig together we couldn't return our gear to our jam hall because the Police had taped the area off due to a murder earlier that evening- quite the way to start our musical journey as a band together.  Since then, we've had the opportunity to play so many different types and scale of gigs from festivals, to concert halls to TV appearances to clubs and yes, dive bars.  We've had the opportunity to open for such greats as the Downchild Blues Band, Duke Robillard, Randy Bachman, Powder Blues Band and share the stage with Mel Brown, Lil Ed and The Blues imperials, Delta Moon, Big Dave McLean, Maria Muldaur Marcia Ball and others.

Paul: Through our Talkin About Live Stream, we have created a series of outrageous musical characters such as Chef Ollie, Bang-Bang Bigelow, Fluffy the Producer, Willy-Wood, Kurli Koiv and Shamus the Flute Boy.

Rob: As the root of all popular music in the 20th and 21st centuries, blues popularity has ebbed and flowed with the heights in the mid to late sixties as giants such as Muddy Waters, Howlin Wolf, T-Bone Walker, Charles Brown, The Kings: Freddie, Albert and BB still walked amongst us and again in the late eighties with acts such as the T-Birds, Albert Collins and SRV brought us that Texas blues sound. I miss those popular waves when blues were prominent on the commercial airwaves and on TV and most decent sized cities had a thriving blues club or two offering the chance to see and hear the giants of the day as they passed through town. My hope is that the next blues wave will return soon enough to really celebrate the great young blues and roots artists of today such as Samantha Fish, JD McPherson, Sue Foley, Steve Strongman, Nikki Hill, Tanika Charles and so many others.

Paul: What we miss about the past is the people who were generating the music. Recently we had the honor of hosting Bobby Rush on our Livestream, and we were blown away by his courage to keep it simple and real. He picked up a harmonica and guitar for our audience in the most moving and honest way. Fewer and fewer of those pioneers are with us anymore.

Rob: It would be that streaming services are forced to adjust their royalty levels so that working musicians can earn their fair share from their creations.

Paul: More live music in more of our daily lives. 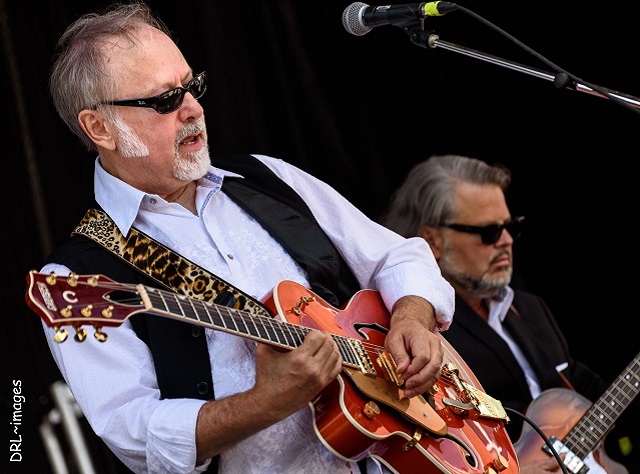 "The original music is very much a conversation with our heroes. Writing blues is a real process of listening and building on a prolific legacy of constantly changing but familiar patterns, reinterpretations and original creation. Searching for stories that are relevant and personal to us and our community is the greatest and most rewarding challenge we happily face." (Rob Deyman & Paul Sapounzi / Photo by DRL)

Rob: In addition to all the musical lessons, confidence to try, fail and then try again until you succeed, teamwork skills required to work successfully within a band setting and the business and marketing skills to survive in this DIY environment.

Paul: Keep changing your repertoire, keep reinventing yourself, never take yourself too seriously and engage with your audience – tell your story.

Rob: The best music should reflect the culture as well as move it forward in a positive direction. I want the act of sharing our music to "move" people physically and emotionally. If we can touch the audience, get them grooving and give them a positive experience that they remember or has affected or inspired them in some way we will have done our job.

Paul: We have a faithful following of wonderful people. They somehow bring them together in the same real and virtual room in a way that nothing else can. Music build community and the Blues community is alive and well!

Rob: I would go to Chicago in the mid-sixties and spend a day and long night in the blues and jazz clubs soaking up the artistry of Miles Davis at the Plugged Nickel and Muddy, Wolf, Koko Taylor, Etta James and Paul Butterfield on the South side and Magic Sam and Otis Rush on the west side. It would be a whirlwind of a day and night. I would be exhausted and walking on a cloud at the same time

Paul: Hot night in June of 1968 at the at the Fillmore watching and listening to Albert King play Night Stomp live. 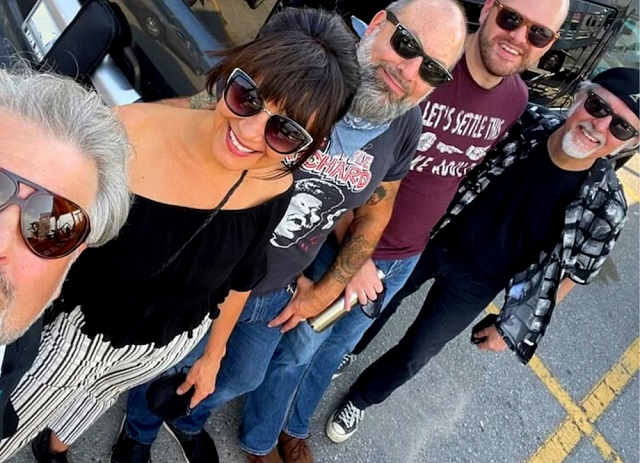