"Blues is unique in that it can address every aspect of human existence: love, money, death, taxes, you name it. I think a successful performance is one in which your audience forgets about their troubles for a little while, and maybe they go home a little happier and a little frisky."

Unfettered by convention, blues superheroes Andrew Duncanson, Ronnie Shellist, and one-man-band Gerry Hundt unite as The Dig 3. Whiskey vocals, masterful harmonica, and keen original songs stay tethered to grooves only possible when the rhythm section is one person. Walking the tightrope between urgency and ease, Dig 3 creates roots music with power and subtlety - perfected by decades of house-parties and honky tonks. Are you sick and tired of hearing the same ol’ blues rock with lightning-fast guitar wankers trying to cram in as many notes as possible in their endless noodling solos, combined with over-the-top growling vocals screaming tired clichéd blues standards, all while no one is listening to each other? SO, AM I!!! That’s why I can’t wait for you to hear the re-invigorating real deal blues of THE DIG 3!                          (Photo: The Dig 3) 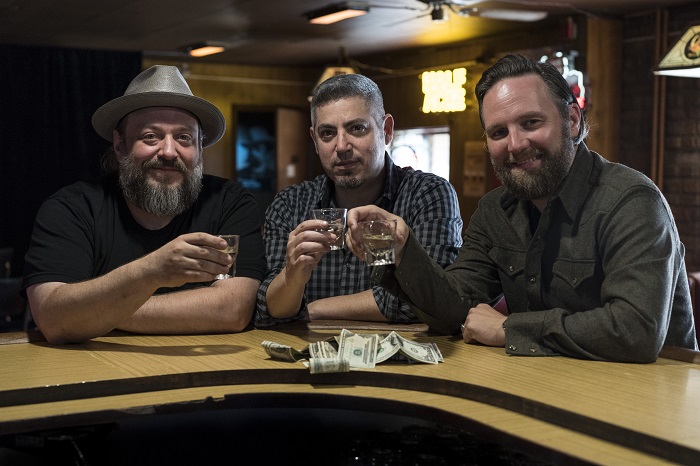 THE DIG 3 is a new, exciting, & entertaining blues/roots all-star trio consisting of the supremely soulful vocalist /guitarist Andrew Duncanson of Kilborn Alley Blues Band fame, harp master & teacher Ronnie Shellist, and multi-instrumentalist Gerry Hundt (who has been the not-so-secret weapon behind Nick Moss, Corey Dennison, and much more!). The Dig 3 on their debut self-titled album "The Dig 3" (2022) truly play DEEP BLUES WITH A FEELING and know how to really DIG INTO A STEADY GROOVE!! It’s so refreshing to hear a group of young talented good friends playing killer old school blues with unique originality, taste, subtlety, and emotion, and all while having an absolute blast doing it. This is some of the most lowdown, raw, wild, and dirty blues I've heard in a long time…think Big John Wrencher's Chicago Blues classic, Maxwell Street Blues from ’69!

Gerry: Well, I think I have a unique viewpoint in that I’ve learned folks will have you play a gig just about anywhere. Bars, restaurants, blues clubs, and festivals are only the beginning; I’ve played at open-air markets, senior homes, rooftops in downtown Chicago, a health food store, pizza parlors, breweries, farms, private clubs, art galleries, and on a boat, to name a few. The key is adaptability - every situation is unique and if you can tailor your sound and set to the venue, you’ll stay busy. It’s a good metaphor for life in general.

Andrew: I fell in love with blues music from my parents' tape collection when I was 12 years old. I knew soon after that I wanted to pursue playing the blues. As a young person I spent most of my time seeking out older blues musicians to listen to and learn from and that grew into a career that allowed me to travel the world sharing the music that I love.

When/How did The Dig 3 come about? What were the reasons that you started One-Man Band experiments? How do you describe The DIG 3 sound and songbook?

Gerry: The Dig 3 came about in August of 2020 as a Facebook livestream in Ronnie’s backyard. The three of us had not played together since the Covid-19 lockdown and we decided it would make for a fun afternoon. Not having any additional musicians made for a very streamlined, intimate sound, and was a safer option for our health as well. We had so much fun that we decided to record live in the same way a couple months later - in fact, I think the recording session was only the second time we’d played together in that format - the band didn’t even have a name yet! All the song lyrics are Andrew’s, and we composed Reposado Rock in the studio.

Personally, I think my fascination with one-man-bands started with the first blues concert I attended - John Hammond. He sang, played guitar and harmonica, stomped his foot hard, and was amazing! Years later, my good friend John-Alex Mason started performing as a one-man-band in the Mississippi Hill Country style, influenced by Richard Johnston. I had moved from Chicago to Northwest Indiana and didn’t know any of the local musicians yet, so I decided to start performing solo like John-Alex with just a kick drum and a hi-hat. I added more pieces - including snare drum, another hi-hat, and combo organ - until I got tired of carrying all that stuff around. When I discovered and acquired my first Farmer FootDrum (a complete drum set integrated into one instrument and designed to be played with the feet), it was far less work to set up drums and my interest was renewed. Over the years, I’ve listened to most of the one-man-bands in the blues and other genres for ideas, including Joe Hill Louis and Doctor Ross. My current favorite is Abner Jay. 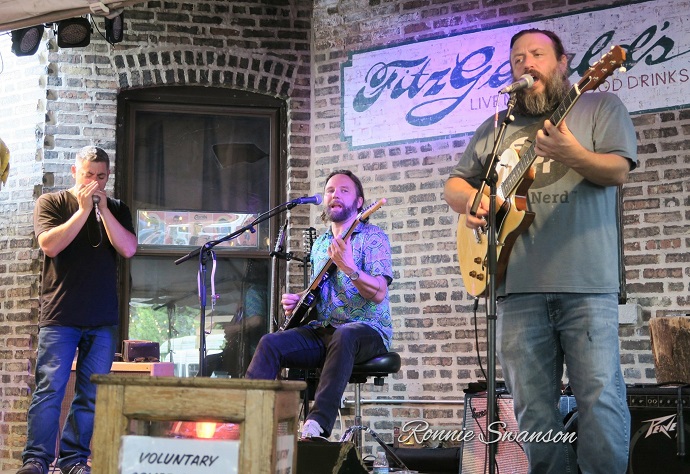 "We will forever miss the original purveyors of Chicago Blues; most of them are gone now, the one ones that brought rhythms and sounds that came from Mississippi and became electrified in Chicago. The future is bright, the younger generation is embracing the history and culture of Chicago Blues. A generation to tell the stories of the blues."

Why do you think that the Chicago Blues Scene continues to generate such a devoted following?

Gerry: That’s an interesting question. I think an important aspect of its continued popularity is the competitive nature of the Chicago Blues Scene itself. No matter how good you are, there’s always someone watching and waiting to take your place, so everyone really tries to set themselves apart at every gig. So not only do you have some of the best musicians in the world here, you get their best performances, too.

Andrew: Chicago was the place for music in its day and the city still treasures its history. Chicago musicians still keep true to the roots and grow the form and put on exciting shows every night and all over the city.

Gerry: Every track on the album is the second take we did in the studio. The only song that was sort of fleshed out prior to the session was “Every Drop,” which we played on the Facebook livestream I mentioned. I happened to pick up the bass VI for that one, added tremolo, and it just felt right from the first note. For the studio session, I had just figured out how to play a different kind of funky beat on the FootDrum - more of a disco thing - so I used that. The first take we did was white-hot and I was super happy with it, but Andrew had missed one of the crucial lyrics, the one about the noodle shop. We briefly discussed fixing it by overdubbing later, but we decided to cut the whole tune again. The vibe was still very much there and we got an even better take the second time. I particularly like the long sustained notes Ronnie plays in his solo; the rhythm parts are relentlessly chugging beneath and he’s floating above, catching a wave. I’m pretty sure that’s a nod to Milwaukee harmonica legend Jim Liban and the fantastic album he cut with Joel Paterson, “I Say What I Mean.”

Andrew: Boss Man's Blues Center on West Lake Street on the west side of Chicago was where me and my band, Kilborn Alley, really cut our teeth. Jammin' with musicians, amazing singers, and entertainers that had roots back to the heyday of Chicago blues. Learned so much from people like Mary Lane, Taildragger, Johnny Dollar, and Harmonica Khan. The jams would go until 2:30 in the morning and we'd soak up the booze with red hots and fried fish.       (Photo: The Dig 3 are Andrew Duncanson, Ronnie Shellist & Gerry Hundt) 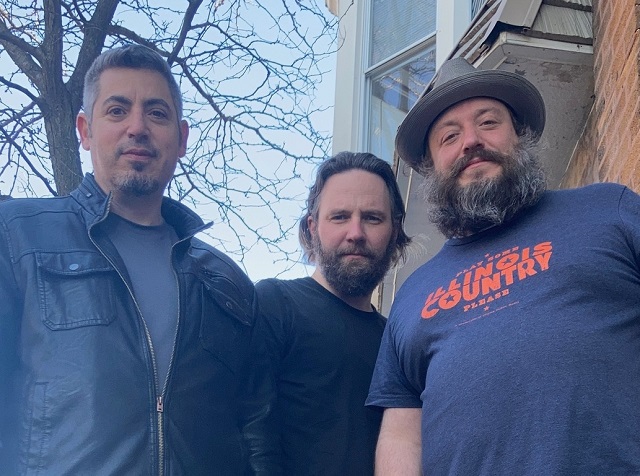 "Chicago was the place for music in its day and the city still treasures its history. Chicago musicians still keep true to the roots and grow the form and put on exciting shows every night and all over the city."

Gerry: I think there are lot of great things about this era’s music, and I’m not really that nostalgic. There are two things, though, and that I can say - it seems to be difficult to find keyboard players seriously interested in blues these days, and live music is generally very loud for the average listener. Pianos and organs aren’t as common in venues anymore, and that, along with tough economic times, makes it more difficult to add them to gigs. And, just because technology enables us to achieve high volume levels, it doesn’t mean every kind of music at every gig needs to be loud.

I don’t concern myself much with the future of the music; at the same time the music evolves, there will always be people who devote themselves to the tradition and roots of it, for at least part of their lives. Now more than ever, you can look up and discover new or old artists on YouTube or Spotify, right on your personal device, what we used to call just a telephone!

Andrew: We will forever miss the original purveyors of Chicago Blues; most of them are gone now, the one ones that brought rhythms and sounds that came from Mississippi and became electrified in Chicago. The future is bright, the younger generation is embracing the history and culture of Chicago Blues. A generation to tell the stories of the blues.

Gerry: I’ve always been interested in the unconscious effects music has on an audience - as in the ways a performer or recording deliberately create a mood or emotional response. Blues is unique in that it can address every aspect of human existence: love, money, death, taxes, you name it. I think a successful performance is one in which your audience forgets about their troubles for a little while, and maybe they go home a little happier and a little frisky.

Gerry: Always do your best - you never know who’s watching. That, and be kind - karma is real.

Andrew: Enjoy each show. The money isn't everything. Enjoy the experiences with your fellow musicians and the audience. When you are playing the blues, play your ass off.