"Blues music has largely lost most of its traditional cultural roots that provided solace and inspiration and instilled tension and release, hope, joy and sadness in generation after generation. Their struggles and history are intertwined within the blues music."

Dusty Scott: The Blues of Silence

Dusty Scott is a Pittsburgh, OH based fine art photographer. Scott with his wife Val Scott – a driven photojournalist with an eye for composition and love for music, travels on their numerous nature and blues music tours each year. Scott (aka Dusty Blues) says: “I was born into a large family in rural Appalachia and raised on a spacious dairy farm. It was from these humble beginnings that I learned to embrace nature, the environment, down-home folks and the quality of humanity. As the years went by I slipped into the abyss of the psychedelic 70’s and discontented 80’s and barely stumbled out - somewhat intact. I dove into the ongoing and whirling information technology cycle and tried to manage a constant foot-hold as the world evolved in an inordinate and thoroughly rapid fashion. 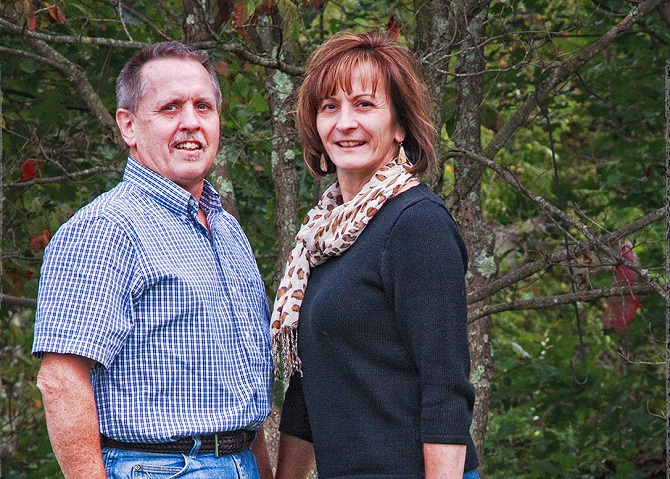 Around this time I met my soul mate Val and we have been energized by each other’s Spirit ever since. From my early days I always loved capturing images but it has been the last 30 years, and most recently, the past 15 that I’ve embraced the revolution of these image captures in a digital transformation with astonishing and continued pace. The technology and expertise required to participate artistically in such a new world required the 10,000 hour test of time and internalization. This continues unabated. That aside, the amazement to me is in the enlightenment I continually undergo understanding the “Mind’s Eye”, it’s relevance to me, some descriptive substance, how it influences me and yet allows that often strange combination of my three main life spans to coalesce into the artistic visions and voices that I am only recently feeling I have the capacity to interpret and develop into the art work creations I behold and harvest.”

It took me some time to trace the roots of my initial rock and roll influences back to the blues, but imbued with this enlightenment I was captivated. Slowly learning the culture and having the opportunities to engage it in places like Chicago, Helena, Memphis, Clarksdale, and such, I was deeply touched by the spirituality of it. This was a paradox to me initially as I understood it at the time to be the “devil’s music”. Yet, as I became friends with numerous blues artists as well as the fans and families, this underlying spirituality and devotion became the touchstone for my blues!

I grew up in Appalachia on a large farm. Our meager existence required most waking hours to toil in the fields and there was little musicality. I was aware over time of the larger music of nature and grew to enjoy listening to the “sounds of silence”.

The 60’s and 70’s came along and I was swept up in the social fabric of the times and the music of our generation seemed then of vital importance. It was really only after embracing the blues music that I found true meaning. I have a considerable music library of primarily blues music. As I develop my artistic creativity, I am able to select appropriate genres of blues that provide me with the foundational consciousness for triggering feelings and emotions needed to enhance my current project. Certain artists provide lyrics, melodies, and rhythms that instill inspiration and creativity. At times you just need a great boogie to make the world evolve! 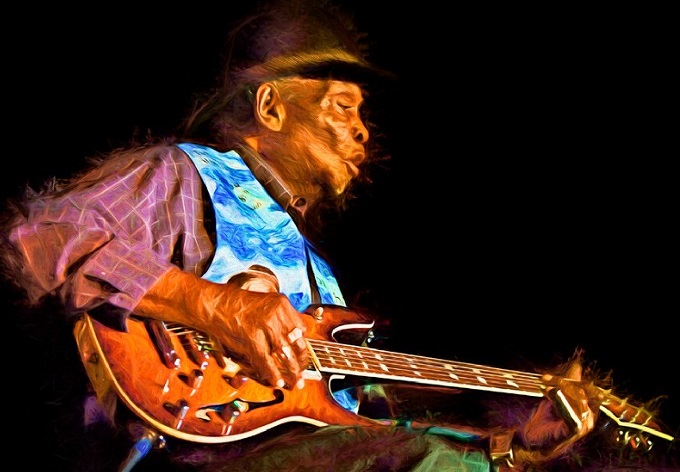 "My hope would be that future generations, millennia from now, upon opening the capsule, would be able to understand blues as it stands at a crossroads today as well as insights into its heritage." (David "Honeyboy" Edwards - Photo © by Dusty Blues)

How do you describe and what characterize Dusty Scott artistic philosophy and artwork?

Having a sublime connection to the earth from my earliest days, my efforts are often to find photographic imagery that allow me to transcend the mere physicality of it; advancing an expression and the message that it inspires in me. Capturing this in such a way as to provide the content with form that, when finished properly, advances an analogous message to the viewer.

Similarly when photographing blues artists, I have precious little time and almost no control over the performance or stage, but purpose my efforts towards that peak of an emotional intensity, a thousand yard stare, a bond, that when properly captured provide the viewer with a connection to the feeling I had at that moment.

What were the reasons that you start the visual and photo art researches and experiments?

It seems I’ve always had a camera. For many years just as a documentarian as life progressed. During the 60’s and 70’s I had the opportunity to capture and record many of the featured rock and roll acts of the time. However, my indulgences in life and limited skills were quite evident. Starting near the end of the last century I embraced digital photography and finally was able to focus my life. I resolved to commit whatever efforts were necessary to improve my skills, technically at first and artistically over time, as enlightenment occurred and my visions became stronger.

Additionally, all aspects of technology moved forward in leaps and bounds and I was able to internalize these and reflect on their greater utilization as an artistic medium. Today we have tools that permit digital imagery never before available to mankind. The culmination for me now allows considerable artistic freedom and creative and inspirational pursuit. I constantly work to evolve and produce artwork that inspires viewers as well as permit me personal solace in these pursuits. 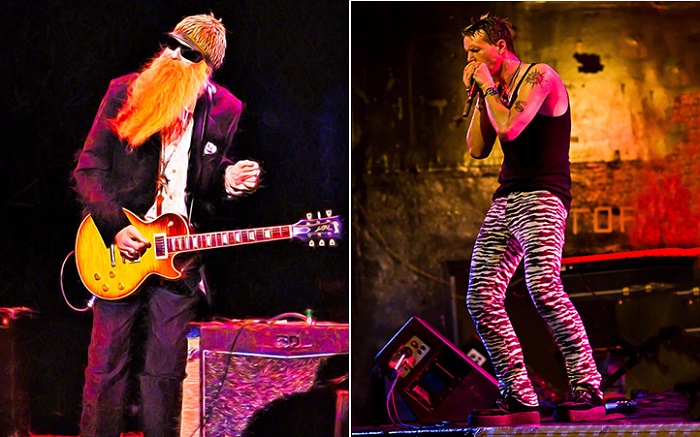 "My fears are that the boundaries of the blues get stretched beyond recognition and the core qualities lose their innate beauty." (Billy Gibbons & Jason Ricci - Photo © by Dusty Blues)

What are the lines that connect the legacy of visual art with the photo art?

The authenticity that the realism of photographs imbued, when first introduced, traumatized the visual art of painting. Painting responded to this with a continual procession of new movements as it looked to regain its foothold as art. This response of painting movements and digital technology’s advancement has moved photography’s elemental realism to change as well. Today we are only limited by the imagination as means of artistic expression. Both mediums embrace the considerable changes and each have changed the meaning of art and the criticism of both.

I truly miss the venerated souls who continually developed this musical idiom. Through the years I saw BB. King, Honeyboy Edwards, Robert Lockwood Jr, Muddy, Howlin’ Wolf, Pinetop, Magic Slim and so many others and their ageless magic and personal spirits. In a number of instances I was able to meet and befriend these artists and developed warm personal memories. Slowly they have passed on and left an unfulfilled void in my blues soul.

My hopes at present are for a resurgence of the blues on college campuses worldwide. Similar to the folk music revivals of the 60’s that rekindled the blues spirit and enlightened a generation, I continually watch for any inkling of this occurring. Given all the television and elevator music that harkens strains of blues, I would expect these sparks to foster another rebirth. My fears are that the boundaries of the blues get stretched beyond recognition and the core qualities lose their innate beauty. 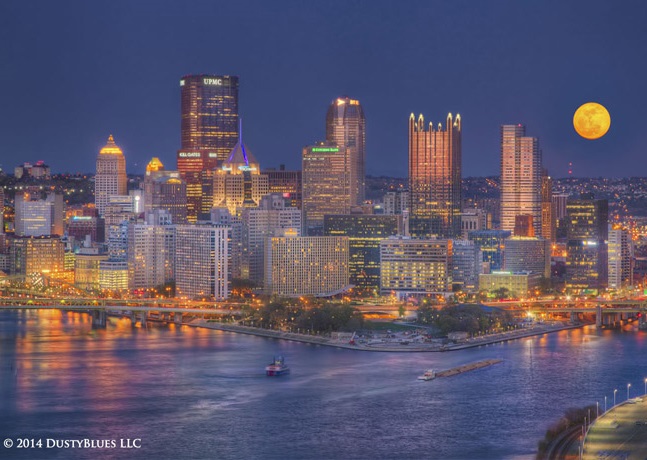 "The authenticity that the realism of photographs imbued, when first introduced, traumatized the visual art of painting. Painting responded to this with a continual procession of new movements as it looked to regain its foothold as art." (Full moon in Pittsburgh - Photo © by Dusty Blues)

The Pittsburgh Blues Festival, an annual local food bank affair and produced by Ron “Moondog” Esser (KBA Award for blues club – Moondog’s) has booked a who’s who of blues talent over the years. Just too many memories to choose from.

What touched (emotionally) you from the Appalachian music scene and landscapes?

My early years in rural Appalachia was mainly county music. From what little radio we could get to most local musical functions this was my world. Square dances, hay rides, county fairs and such were all bound to variations of country music. As I grew, maybe around 12 years old, we lived 10-12 miles from a small college town. Several adventurous students began to advocate for performances by traveling musicians as they passed nearby on their routes to the larger venues. I was able to ride my bicycle to a number of these and was fortunate to experience a young BB King, The original Allman Brothers, Mountain, and others. It was an introduction to these that influenced me throughout my life.

Photographically, the Appalachian landscapes hold treasured visual moments and experiences. On the farm you saw each day’s sunrises and sunsets as well as momentous occasions when Mother Nature really exhibited her diversity. The natural rolling hills instilled from the last glacial retreat hold magical places that I still visit today.

What is the impact of Blues music and culture to the racial and socio-cultural implications?               (Henry Gary & Ronnie Earl - Photo © by Dusty Blues) 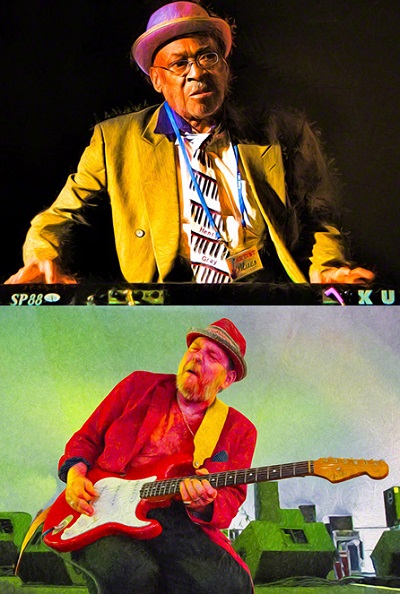 Sadly, blues music has largely lost most of its traditional cultural roots that provided solace and inspiration and instilled tension and release, hope, joy and sadness in generation after generation. Their struggles and history are intertwined within the blues music.

Music Maker Foundation, in North Carolina, is an organization in the U.S. that does so much to get recognition and employment for some of the greatest, relatively unknown, blues musicians remaining, allowing them to maintain a sense of personal dignity, record their music and perform as often as possible. They work tirelessly to instill an extended blues social consciousness of these cultural treasures.

I would love to be at the Tutwiler train station with W.C. Handy and watch that blues man play slide guitar with a knife. Being able to follow afterwards and speak of his music and songs would be a great adventure.

Secondary would be to catch the last performance of Robert Johnson on his fateful night behind Schaeffer’s store. How would I restrain myself to stop him from drinking that moth ball poisoned corn whiskey?

In either case I would have my camera to capture either trip.

What from your memorabilia (books, records, photos, artworks etc.) would you put in a "time capsule"?

I would put this interview in that time capsule as well as a link to all your interviews. My hope would be that future generations, millennia from now, upon opening the capsule, would be able to understand blues as it stands at a crossroads today as well as insights into its heritage. 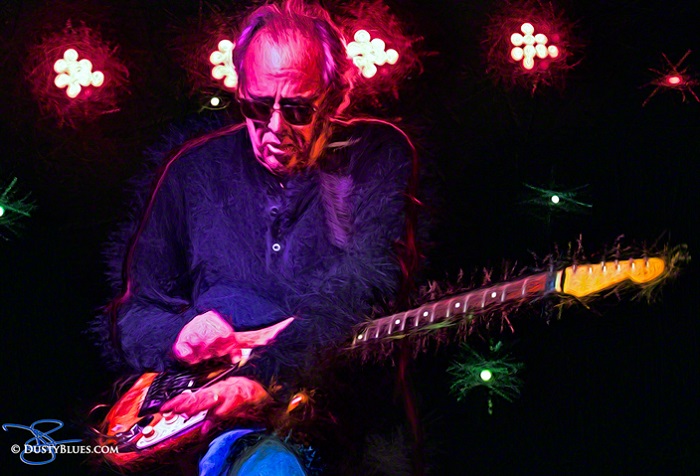