"I think the impact of rock and roll and blues music had on the culture are, the music brought blacks and whites together through their music in a way that had never happened before. Jazz music started it in the 40s' but it really changed in a bigger way when kids discovered all of the great blues artists for the first time. It was a revelation!!"

Ken Zabel is an Idaho-based artist with unique perspective and ability to blend modern pop art with expressionism through the use of acrylics on canvas. Ken says: “I am a musician, (keyboards) and I have worked in three dimensional sculptural art making flying saucer art from all recycled materials. I just recently took up painting in acrylic on canvas because my daughter is a gifted painter and I thought this would be something we could do together. I have been told by people I trust that I have a knack for it and it has been a very fun journey indeed. Looking at some of the truly gifted artists on this site who paint the same sort of stuff inspires me to keep improving and to try and expand my horizons a little and work in several different media and subject matter in the foreseeable future.”                                    Artworks © by Ken Zabel Art / All rights reserved 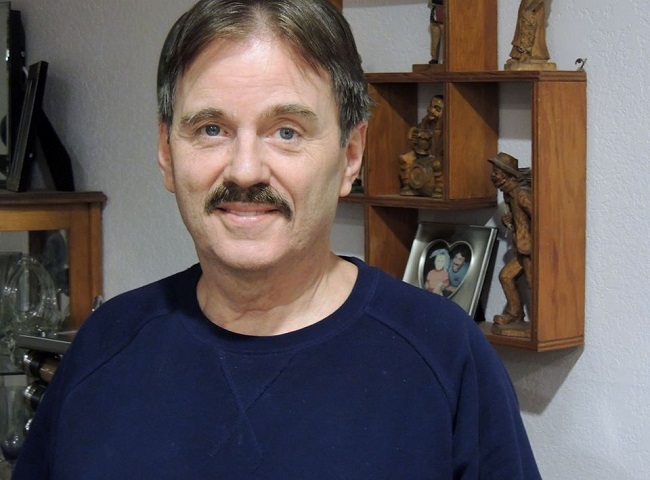 And continues: “I have been a musician for most of my life but I became interested in doing different art projects including making spaceships out of recycled materials and selling them at a collective art group called the Artisan gallery in Boise, Idaho. In the last years I found painting with the encouragement of my daughter Kelli, who is a terrific artist herself. I like to do portraits of famous people, mainly musicians, historical figures, movie greats, and some fantasy I try to add a little touch of surrealism to some of my art and some have said I am a pop artist. I never have liked labels so I just like to call it Ken Zabel Art! I have done three designer t shirts of Muddy Waters, Howlin’ Wolf, and John Lee Hooker for the Boise Blues Society. I did the first record cover for the Portland based band the Pynnacles, my art has also been featured on a traffic box at 12th and Main in downtown Boise, Idaho. My paintings explore a relationship between pop art, outsider art and some surrealism. My paintings are often classified as part of the pop-art movement as this kind of art can be part of a collective memory. By using popular themes, I touch various overlapping themes and strategies. Several variations of subject matter can be recognized, such as the relationship between popular culture, myth and elaborate fantasy worlds."

The blues for me rings the bell for everything real about music. The blues brought in jazz, and the dawn of rock and roll and has influenced music ever since!

What characterize Ken Zabel’s artwork? What experiences in your life have triggered your ideas most frequently?

My portrait art reflects my love of the music icons that influenced me from the beginning. I have been a musician throughout my life and I find that painting what I love is just another expression of my passions.

How has the ‘counterculture’ & ‘Rock way of life’ influenced your views of the world and the journeys you’ve taken?

I am a child of the sixties, and I went through all the craziness of the times including all of the pitfalls of drugs that went along with it. To me music is magic and is the closest thing to a time machine that there is. Who does not hear a great song from the past and it takes you to a forgotten memory that you cherish? 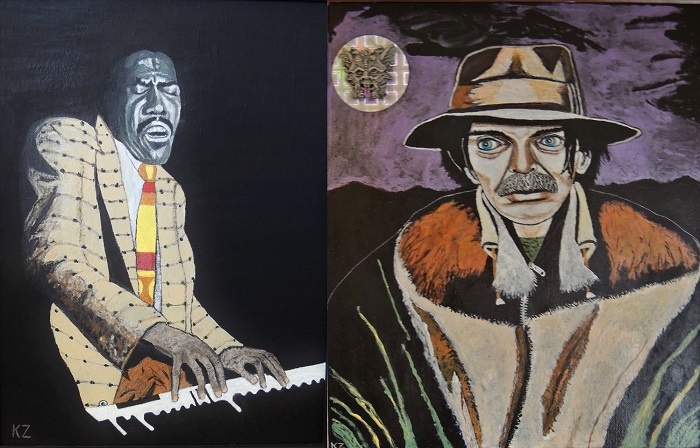 "The blues for me rings the bell for everything real about music. The blues brought in jazz, and the dawn of rock n' roll and has influenced music ever since!" (Artwork: Jimmy Smith & Capt. Beefheart)

What has been the relationship: music and art in your life? How does music affect your mood and inspiration?

I have been a musician for over 50 years but art has always gone hand in hand with it. I actually started painting in 2011 so that was a fairly recent entry into my life. It is no accident that when I started painting, I painted what I love so the first 20 or so paintings were of famous musicians that I admired. I decided to call my website "rockstars on parade and other oddities". I branched out later to historical figures, famous actors, and some fantasy pieces. I am inspired by music and art in the same way because both make me feel when I am doing it that I can create my own world. When I am doing either one, hours seem to pass like minutes and for that period of time, I am totally absorbed by what I am doing.

I miss the days when music was played live and from the heart, with no artificially tuned electronics that can make even the worse no talents sound good. Music should be expressed on the fly with all of it’s flaws and feeling in tact!!!

If I could change one thing about today's music and make it a reality it would be to banish all D.J.s from taking jobs away from real musicians who need venues to support themselves.99% of musicians work hard and for very little money because they love what they do and get a precious little appreciation for it.

What has made you laugh from “One Flew Over the Cuckoo's Nest”? What touched (emotionally) you from Tesla?

In regards to “one flew over the cuckoo’s nest, I have been a longtime fan of the great Jack Nicholson for years and I painted him as he looked in that movie that made him a megastar. The portraits that I see all of the time of him are usually ones where he has aged and I wanted to capture him at the beginning of his rise to fame.

My thoughts on Nicola Tesla are the following, Nicola Tesla has always been an inspiration to me because he was a genius and actually built things that changed the world for the benefit of mankind and never cared about making a fortune from it. He was mysterious in many ways and made a comment that he was receiving help with his inventions from alien beings from another world. He actually visualized how to build something in his head without having to write down equations, and he was able to do it!!He was so far ahead of his time compared to anyone else, including Edison. "I miss the days when music was played live and from the heart, with no artificially tuned electronics that can make even the worse no talents sound good. Music should be expressed on the fly with all of it’s flaws and feeling in tact!!!" (Artwork: Frank Zappa & Edgar Allan Poe)

As to your question of how I would spend the day with Edgar Allan Poe that is a tough one. I suppose I would interview him and find out how he got his ideas. I would have to do this early in the day before he got his buzz on for the evening. As far as Frank Zappa goes, I would let him know that I consider him the conductor of rock and a visionary of our culture. I would also tell him how much that I loved his sense of humor.

I was lucky enough to see Jimi Hendrix at one of his L.A. concerts and I was peaking on acid at the time. It was very surreal to say the least!! (there goes that time machine again) HA! HA!

What is the impact of Blues and Rock n’ Roll music and culture on the racial and socio-cultural implications?

On your question on what I think the impact of rock and roll and blues music had on the culture are, the music brought blacks and whites together through their music in a way that had never happened before. Jazz music started it in the 40s' but it really changed in a bigger way when kids discovered all of the great blues artists for the first time. It was a revelation!! Elvis Pressley pretty much sealed the deal and then in the 60s when bands like the Rolling Stones, Yardbirds, the Animals, and van Morrison with the band Them started redoing old blues tunes and making them their own. The black blues musicians didn't mind because the British invasion gave their careers a resurgence and brought back attention to Blues music.

Let’s take a trip with a time machine, so where and why would you really want to go for a whole day? What memorabilia (books, records, etc.) would you put in a "time capsule"?

As for your time capsules question, we are all living in a time capsule!! HA!HA! If I could go anywhere for one day, I would love to spend time in Tibet. The only problem would be having only one day to absorb the monk's teachings. On the time capsule question, I would send the book Stranger in a strange land and the record Kind of Blue by Miles Davis. 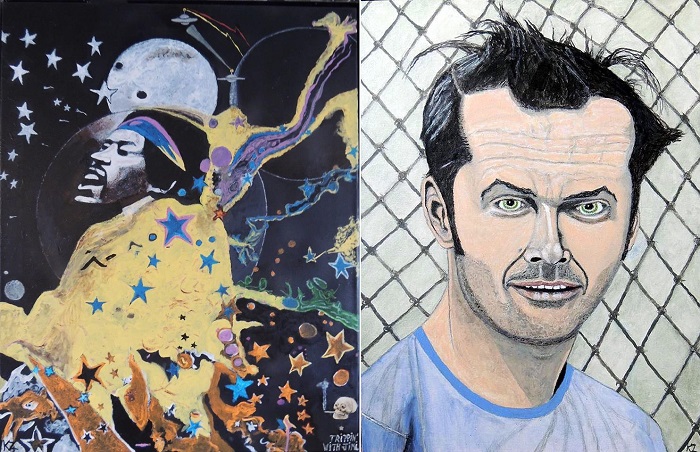