"Music is so much of everything, and the blues is the most honest music there is. Rock n roll is a lifestyle. It’s saying what you believe and sticking to it."

The unparalleled West Coast guitarist Kid Ramos is back with his first album in 17 years, titled "Old School" (2018) features lead Thunderbird Kim Wilson on one track, and also Ramos' son, Johnny, on vocals -- along with some very special guests, as the review below points out. We're honored to work with Kid, and overjoyed with the powerful blues he's made on the new record. Born on January 13, 1959, in Fullerton, CA, blues-rock guitarist David "Kid" Ramos inherited his love of music from his parents, who were both professional opera singers. When his father grew tired of life on the road, he settled down with his family, buying a gas station in Anaheim. One day, when Kid was eight, he bought his son an electric guitar and amplifier from a customer passing through. By his teenaged years, Ramos was playing friend's parties and nightclubs on a regular basis, joining harmonica expert James Harman's blues-based band in 1980 (all its members sported sharkskin suits), playing up and down California alongside such punk bands as X, Oingo Boingo, the Blasters, and the Plimsouls. Kid played with the Harman Band for most of the '80s, until his departure in 1988, and although he filled in as the guitarist for the outfit Roomful of Blues, decided to put his musical career on the backburner to focus on his home life and start a family (for the next several years, Ramos was employed as a water delivery man). 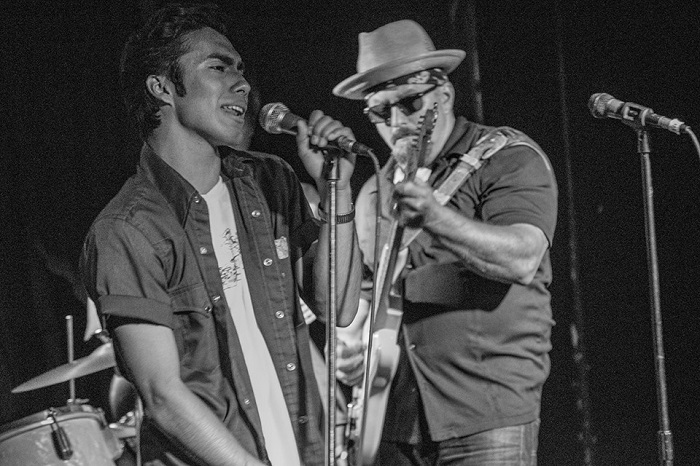 Kid says about his new album: “A lot has happened since the last record, Greasy Kid's Stuff in 2001. Since then I've fathered two small boys into young men, beaten cancer. It's been about 17 years. I figured it was about the right time toput a Blues record out. My youngest son Johnny has joined the family business. This is his singing debut on this album and he was only 17 at the time of the recording. I'm excited to still be playing guitar,happy that people still want to see and hear me, and haven't thrown any rocks at me yet. This album was made in two days at Big Jon Atkinson's home studio in Hayward, California. It was recorded live to tape on two tracks using all analogue equipment, vintage microphones, and the brilliant technique of Jon Atkinson's recording. The album includes the expert playing of Kedar Roy on bass, Marty Dodson on drums, Mike Welch on piano/organ, Danny Michel on 2nd guitar, with the legendary Kim Wilson performing vocals on one song.”

Kid: What does the blues mean to me? Well, the blues is an expression of your own life, and the things that affect you, and how you internalize them. Then it’s how you express it in music. It’s what’s in your soul. The idea is to communicate your own feelings about life, and how you feel about the things that affect you. It’s what you feel in your soul.

How do you describe Kid Ramos sound and songbook? What characterize the philosophy of "Old School"?

Kid: The Philosophy of Old School: Old school is a style. It’s the influences. My music is built on the foundation of the original masters, because I’m a fan first. As a fan you want to emulate your teachers, and your influences. It’s the natural course of things. Not to copy, but to internalize and study, then make it your own. To me, just copying is uninteresting. I want to express what’s in me.

Johnny: During the Old School sessions, I got to direct the band with how to play Anna. I got my dad’s hollowbody Harmony guitar and showed them the changes. It was cool to talk to the band and just hang out. Kedar, Marty and Bob are all really cool dudes. Seeing Big John and Danny Michael approving of my singing on All Your Love and Anna was really encouraging to me. Those guys are wizards at recording. 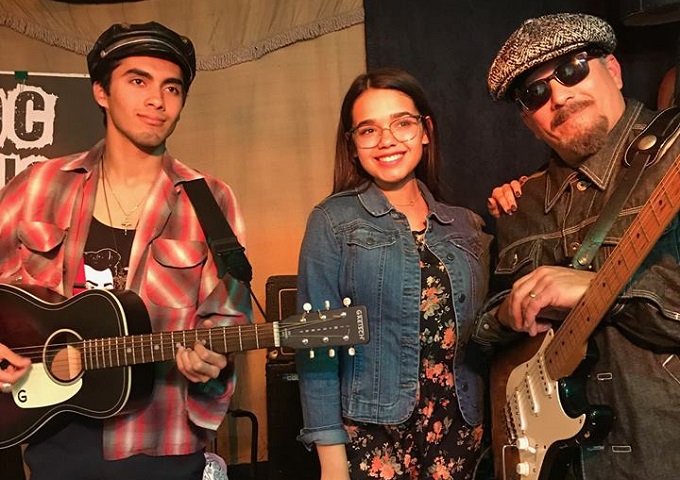 "What does the blues mean to me? Well, the blues is an expression of your own life, and the things that affect you, and how you internalize them. Then it’s how you express it in music. It’s what’s in your soul. The idea is to communicate your own feelings about life, and how you feel about the things that affect you. It’s what you feel in your soul." (Photo: Kid Ramos, Jaalene and Johnny)

Kid: The fact that I learned to play the guitar, it’s allowed to me to travel across the world. It’s given me the opportunity to meet some great people, to forge friendships that have lasted decades. I don’t think my views of the world are particular to me, I think we all share common things. We all seek life, liberty and the pursuit of happiness.

Kid: I’ve had some really good people inspire me. I’ve had opportunities to play on stage with a lot of my heroes, to back up amazing people. People like Big Joe Turner, Floyd Dixon, and Gatemouth Brown. For them to accept me and make and acknowledged me as legitimate it validated my reasons for doing what I’m doing. I was 22 years old when I played with Big Joe Turner, and I was extremely intimidated. I didn’t know what I was going to do, and we just followed him. At the end of the night he came over to me and said, “Kid, I like the way you works.”

Why do you think that the Kid Ramos music continues to generate such a devoted following?

Johnny: Kid Ramos music continues to generate a devoted following because my Dad is a really genuine person, and of the best guitarists out there. He’s a servant to the song, he compliments whatever song he plays on and really feels the music. When he’s playing with another guitarist, he has such a distinct style of playing. He has more outside influences than a lot of blues guitarists, because he loves good music. He loves the Beatles, Rockabilly, Soul, and Jazz. I also think if you want to see how a person really is, you look at their friends, and he’s friends with some of the best people in the world. He’s a hard worker, working a day job, and a guitar slinger at night. He’s my teacher, and one of the only teachers I don’t hate. 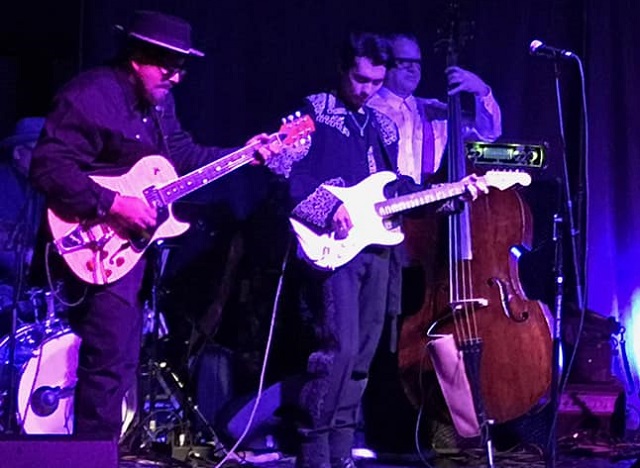 Kid: When I was in the Thunderbirds we were on tour with Gatemouth, performing at Theaters. Every night after our set, Gatemouth would come up and we’d all play together. We played together every night for six weeks. I became friends with him. For some reason he took to me. He was kind of a cantankerous older guy, but he was nice to me. We’d sit and eat and talk. He’d tell me about Guitar Slim, and Freddie King, and all of my heroes. I just got to hang out with him. He’d call the home phone and leave messages. The fact that he would call me out of the blue was pretty cool. That’s how he came to play on my Greasy Kid’s Stuff record. When he came and played on that record, little Charlie and Junior Watson were there because we recorded earlier, but they stayed just to see Gatemouth. What guitarist wouldn’t? He came in, and I tuned his guitar for him, adjusted an amp and reverb tank for him. He didn’t touch or adjust anything, he just picked the guitar up and played it. It was pretty cool.

Kid: We can’t really live in the past. I’ve got great memories. Most of my life is in the rearview mirror at my age. I have a lot of great memories of the past. As far as the future goes, the future looks bright. There are young people like my son Johnny that are interested in this music and want to go out and play. I’m sure that when the originators of the music we’re playing it, they knew that it was going to continue. They knew it would. I have hope that it will.

Kid: If I could take a time machine to anywhere I wanted? I would go to Chicago in the 50s and see Elmore James. I’d hang with Elmore James for the day. I think that’d be pretty hip. 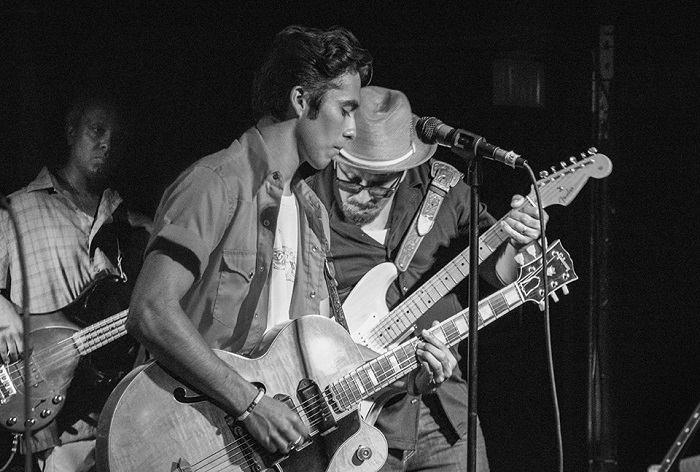