"I think Jazz and Rock & Roll culture is a racially unifying form, which breaks down the socio-cultural barriers."

Eccentric, innovative, enigmatic, Nik is full of surprises. From big band Janet Juve and the Red Hot Daddies to soul bands Maurice Traveler & the Starting Handles and Soulfinger. From circus orchestra M.D. for Gerry Cottle's Circus to the esoteric mumbo jumbo jive of 'Sphynx'. From the space jazz of Hawkwind, writing seminal anthems such as Master of the Universe, Brainstorm, and D-rider as the driving force in the creation of the legend and mythology that created that band's success, to 60's ska Skastars. From the pomp rock of the Imperial Pompadours to musical, political, satirical punk cabaret with Inner City Unit. From busking cool groovy music on the streets of Cardiff and Mexico City to Nik Turner's Fantastic All Stars playing cool Latino jazz. From equally fantastic Nik Turner's Galaktikos playing big funk Latino hot grooves, to the Nik Turner Band playing some of all that and more. Guested and recorded with numerous bands, including: The Damned, Stranglers, Ruts, Spirit with Randy California, Utopians, Guillemots etc. Nicholas "Nik" Turner is an English musician, best known as a former member of space rock pioneers Hawkwind. Turner plays saxophones, flute, sings and is a composer. While with Hawkwind, Turner was known for his experimental free jazz stylisations and outrageous stage presence, often donning full makeup and Ancient Egypt-inspired costumes. Turner was born in Oxford in August 1940 to a theatrical family, although his father was working in a munitions factory. At the age of 13 his family moved to the Kent seaside resort of Margate where he worked at the local funfair during the summer holiday season, befriending another seasonal worker Robert Calvert. His first influences were Rock n' Roll and the films of James Dean. He had two years of clarinet and saxophone lessons in the early 1960s but never considered himself good enough to pursue them seriously. However, whilst travelling around Europe he encountered some free jazz players in Berlin who impressed upon him the importance of expression over technical proficiency, and it was then that he decided that what he "wanted to do was play free jazz in a rock band". Turner, owning a van, had originally offered his services as a roadie to the newly formed Hawkwind. However, when the band discovered his passion for the saxophone he was offered a position in the band to add to the overall weirdness of their sound. Nik's new solo album, Space Fusion Odyssey, released in July 2015 via Purple Pyramid Records.

What do you learn about yourself from the free spirit of Jazz and what does the blues mean to you?

The free spirit of Jazz inspires me with the idea that I can do that too, play what is called Jazz, Jazz was the expression of feelings, love, making love, harmony, communication of ideas, that everyone is different, and everyone can express their own feelings in different ways and that everybody’s expressions are valid.

The blues is a form of musical structure, derived from expressions of musical feelings from music of Africa, blended with the music of the African American people of America.

How do you describe Nik Turner sound and what characterize your music philosophy?

Nik Turner sound is about freedom of expression, where everybody can feel free to express themselves in their own way, where everybody’s expression is valid, I say ‘enjoy yourself, and don’t give a f*ck, you are the only one who knows what you are trying to achieve and say, so do your thing’. 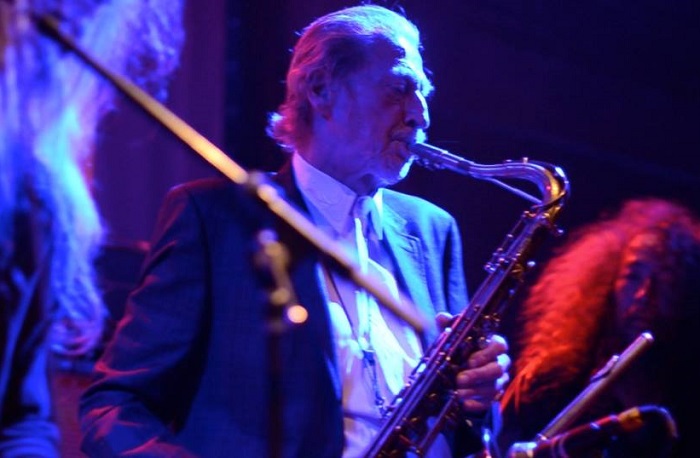 "I think I miss the inspiring players who stimulated me to new musical directions. I am only optimistic about the future, and look forward to exciting musical times."

What were the reasons that made your generation to be the center of artistic, social, and spiritual researches?

It was the Spiritual Awakening arising from the vacuum left after World War 2, VietNam War, of people searching for a meaning of life, a meaning of Existence.

Meeting Timothy Leary in Vacaville Psychiatric prison in 1973 was a very thought –provoking interesting, experience, a simple, spiritual man who was seen as being a threat to the National Security, and the fabric of democracy in the United States, because of his promotion of the drug, L.S.D. as a spiritual doorway to a higher awareness of reality and enlightenment and love.

Also my meeting and working with Barney Bubbles, the Graphic Designer of both Hawkwind and Ian Dury Artwork, another very spiritual man, but in a very much more creative way, both visually and philosophically.

The Advice I learned from them, be yourself, believe in yourself, and love one another.

Memorable gigs for me – playing an Andy Warhol ‘Viva Superstar’ Launch Promotional Reception gig, where Psychedelics caused the audience to turn into skeletons, [is this a psychological reference] and the instrument leads to turn into snakes. I seemed as if it ought to be frightening, but I ignored it and it went away, and I continued the gig as normal.

Another was playing a concert in New York at the Tower Ballroom, where the Director of the Hayden Planetarium talked about Comet Kahoutek, which was in the sky at the time, and then organized a big reception for the band at the Planetarium. Awesome!

Another memorable concert was a Gay Liberation Ball at St Pancras Town Hall where I was seriously electrocuted on stage, nearly died, went immediately to the Hospital, had my 3rd degree burns dressed and returned in time to finish the show. 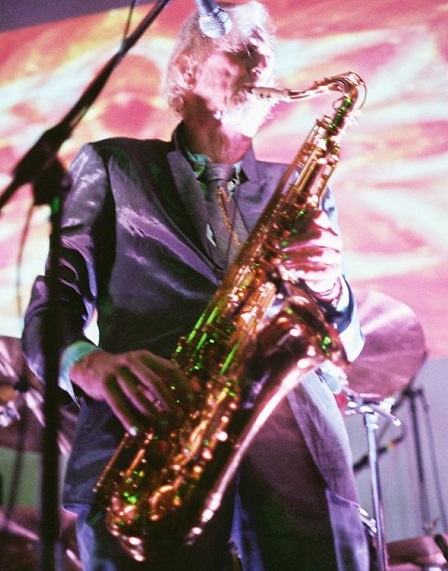 Another was fire-blowing on stage, with a can of lighter fluid, and a gas lighter, where I blew a huge ball of fire, but my hand was in the middle of it, and when the fire went out, my hand was still alight, and wouldn’t go out until all the lighter-fluid had burnt out. Hospital again, 3rd degree burns dressed, getting back to finish the show, trying not to make a habit of such scurrilous behaviour.

Another memorable concert was supporting the Grateful Dead at Bickershaw Festival in the early 70’s, hanging out with Jerry Garcia, great times.

Others were the first Glastonbury Festival, where everybody turned into bizarre looking Aliens, Wow!

Playing my flute inside the Great Pyramid of Giza, Magic indeed

Putting up my Stage every year at Stonehenge Festival and playing with most of the bands there, Amazing

I think I miss the inspiring players who stimulated me to new musical directions. I am only optimistic about the future, and look forward to exciting musical times.

That everyone may express themselves musically to their own creative satisfaction.

What are the lines that connect the legacy of Jazz & Blues with Space Rock and continue to ancient music of Mexico, Egypt, and the lands of the Celts?

These are the ancient universal lines of harmonic continuity expressing the zeitgeist of humanity. 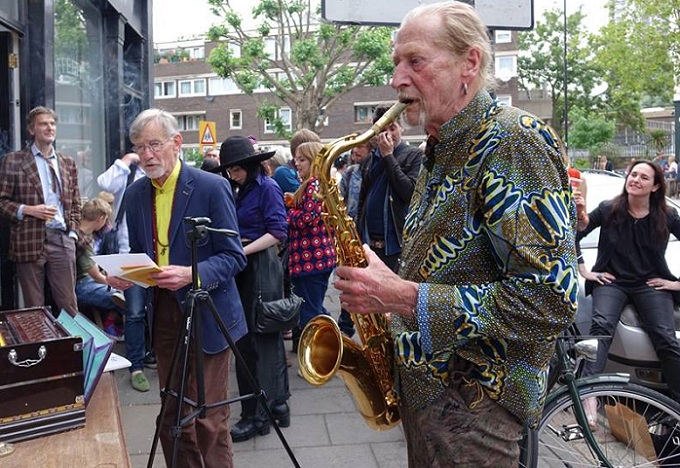 "The blues is a form of musical structure, derived from expressions of musical feelings from music of Africa, blended with the music of the African American people of America." (Photo by Anu Sharma - Underground poet Lee Harris and Nik Turner at Idler Academy 2015)

Hearing Donald Trump at the American Presidential Nominations, made me laugh.

Kanye West’s ridiculous tirade al Glastonbury Festival made me laugh, he’s such an arrogant stupid imbecile, and such an egotist

What is the impact of Jazz and Rock & Roll culture to the racial and socio-cultural implications?

I think Jazz and Rock & Roll culture is a racially unifying form, which breaks down the socio-cultural barriers.

I think I would like to go back to the Isle Wight festival, 1970, to experience the excitement of the music, and the Event, Miles Davis Band, Jimi Hendrix Experience last gig, Santana, The Doors, Jethro Tull, Sly and the Family Stone, Moody Blues, Joni Mitchell, and many more. Truly Inspirational, [and it was my Birthday!]