"Every experience that the Black American has endured can be found in the Blues."

Hubby Jenkins is a talented multi-instrumentalist who endeavors to share his love and knowledge of old-time American music. Born and raised in Brooklyn he delved into his Southern roots, following the thread of African American history that wove itself through country blues, ragtime, fiddle and banjo, and traditional jazz. Hubby got his higher musical education started as a busker. He developed his guitar and vocal craft on the sidewalks and subway platforms of New York City, performing material by those venerable artists whose work he was quickly absorbing. An ambitiously itinerant musician, he took his show on the road, playing the streets, coffee shops, bars, and house parties of cities around the U.S.                    Photo © by Bill Steber 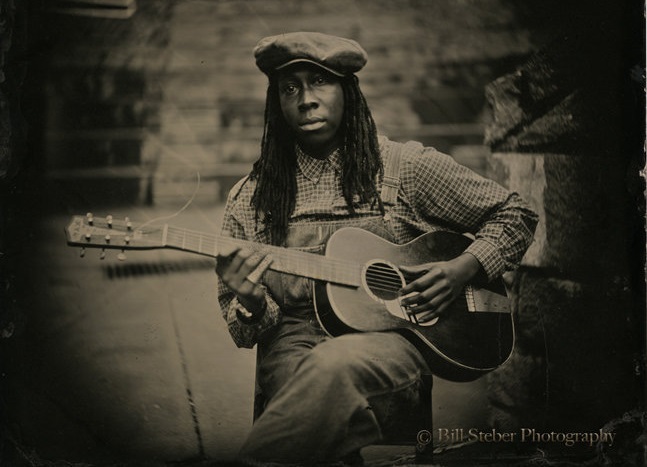 After years of busking around the country and making a name for himself, Hubby became acquainted with the Carolina Chocolate Drops. Since 2010 he has been an integral part of the Grammy award winning Carolina Chocolate Drops and continues to make solo performances. The band got together in 2005 at an event called the Black Banjo Gathering in Boone, NC. We met each other there and circumstances soon permitted that we live close to each other and we started to visit our mentor, 90 year Black fiddler, Joe Thompson. Since then, we have been lucky enough to play our music all over the world and the US.

What do you learn about yourself from the American Roots music and what does the Blues mean to you?

I first got into country blues when I was about 18 and playing bass in a band with friends. We were going through a Bob Dylan phase and soon learned that his first album was filled with covers of blues songs. I got my hands on a Bukka White and a Skip James album. Hearing Skip changed the way I looked music - the idea that one person with a guitar could express true honesty and deep emotion like that was very powerful to me. After that I bought a guitar and began playing pre-war blues and my own songs. I also started learning about the history around the music and discovered how much African Americans had shaped and developed American music and culture from the banjo through rock and roll. That opened the door to old time and minstrelsy.

The blues represent the Black experience in a country that accepts and oppresses us simultaneously. It is a reminder of the deep flowing river that I am a part of and continue to flow within. It is the root and soul.

How do you describe Hubby Jenkins sound and songbook? What characterize your music philosophy?

I like to describe my music as traditional American music. I like to play blues, rags, banjo tunes, gospel, early country and jazz. Through the songs I play, I attempt to represent different aspects of our history and experiences. There are stories behind a lot of the songs I play that illuminate dark and hidden parts of our history and connect to the current context of black people today. 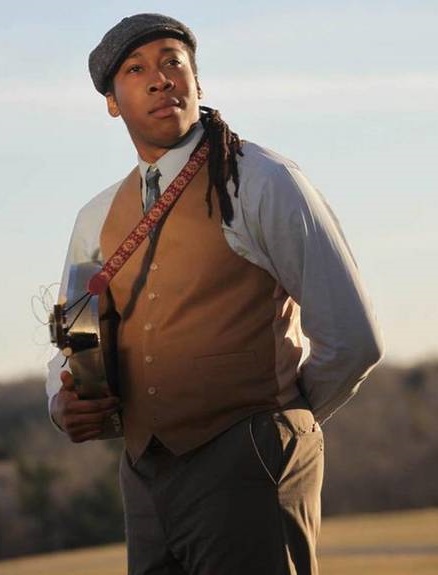 When I first joined Carolina Chocolate Drops, we opened for Bob Dylan. I only got to meet him for a minute, but it was a big moment for me. He was the gateway to blues for me, so it felt like musically I had come full circle. Opening for the idol that sent me on the path I feel I was meant to walk.

Through performing, I have met many great musicians and artists that have given me good advice. When I first started playing I was a carpenter’s apprentice to a man named John Ewbank. Ewbank was a singer-song writer. Two things he taught me that stuck were, “Never use the stage as a therapy couch” and “Never be afraid to ask about your pay.” It taught me to search for other things to talk about besides my own problems and to be smarter and fearless about the business aspects of playing music. Another important bit of advice came from John Cohen of the New Lost City Ramblers. He watched me perform a few years ago in New York and told to me always mention that the banjo came from black people. That reminded me of the importance of educating and performing with a message.

When I first started performing I had only been playing guitar for about 6 months. I suffered from terrible stage fright and would shake while playing. I invented Blind Hubert Jenkins so that I could wear sunglasses, which helped with my nerves. I started playing more shows and got more comfortable. I played a Halloween house show and a fan helped me around, believing I was actually blind. During my performance it became very important that I wasn’t blind and the man became very angry. I realized then that I didn’t need the glasses anymore and became Hubby Jenkins the very next day.

What do you miss most nowadays from the old-time music? What are your hopes and fears for the future of?

I think that old time is going through a strong resurgence right now. You can find people and groups approaching the deep well of music in different ways and from different aspects. I think most people find are pop music to be to homogenized and shallow. Old time is a venue for people to express more honest and personal stories. That being said, I miss the political/social responsibility that folk artists in the 60’s felt and put into their songs. I’d like to see that come back. I am hopeful for the future, but I guess a fear would be the lack of opportunities for people who play old time. As the pop culture moves further away from interpreters and acoustic players there may be fewer places to perform and fewer people invested in those artists. 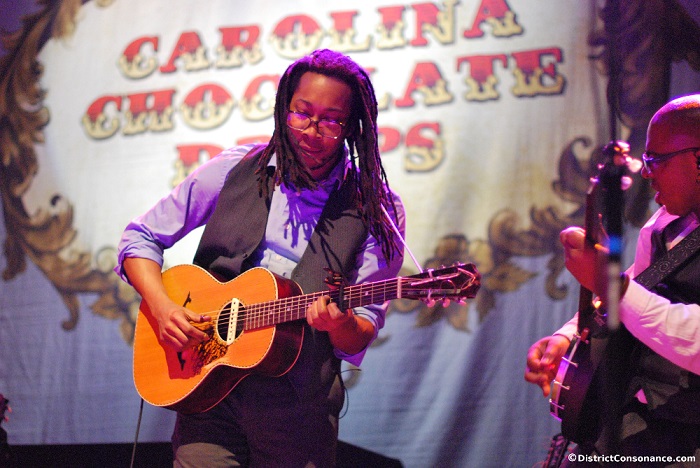 "The blues represent the Black experience in a country that accepts and oppresses us simultaneously. It is a reminder of the deep flowing river that I am a part of and continue to flow within. It is the root and soul." (Photo © by District Consonance)

I would love to see a change in the images of women that we see in pop music. I believe women are generally oversexualized and favored and critiqued more for their looks and fashion than artistic competence. In old time there is more freedom and a varied array of how a woman can perform, dress, and express herself.

What are the lines that connect the legacy of Blues Southern roots and African American history?

Every experience that the Black American has endured can be found in the Blues. If you think you don’t know about the African American diaspora, it’s actually in every blues song about a train. If you think you don’t know about the bias of the prison system, it’s in every blues song and work song about jail. When Skip James says “If I hang around Louisiana they’ll hang me sure,” he’s talking about the danger of being lynched that existed in the South for generations. Connecting these lines for people has become my musical mission and the more I learn about the history, the more I hear in the songs.

What has made you laugh and what touched (emotionally) you after years of busking around the USA?

Once while hitching around the country, I found myself in Tucson, AZ. I was pretty broke and busking outside of a restaurant. I was playing for maybe an hour and had only made $5. Someone from the restaurant came out and I was afraid he was going to ask me to leave, but instead he offered me a meal. I ate and continued to busk. Soon a homeless woman sat beside me. She bummed a cigarette and began to talk to me about the bible and about being the reincarnation of Mother Mary. She had mental illness, but was very nice. Or so I thought until I turned around and she grabbed the money from my case and ran off. 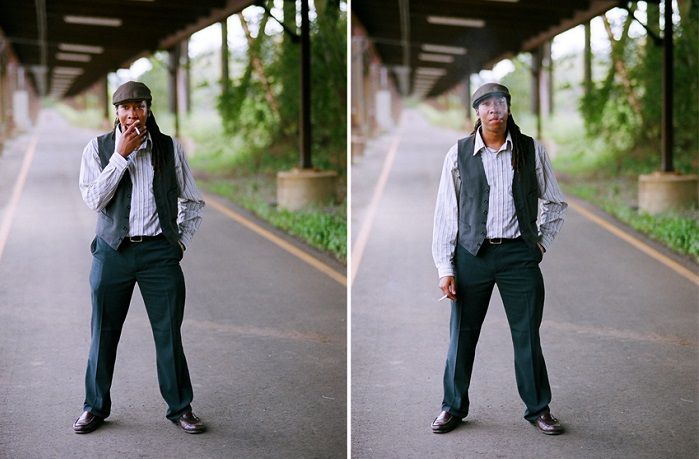 "I miss the political/social responsibility that folk artists in the 60’s felt and put into their songs. I’d like to see that come back. I am hopeful for the future, but I guess a fear would be the lack of opportunities for people who play old time."

When I first picked up the banjo it was a revelation to me that black people had invented it. I soon learned that is new information for people who had been playing the banjo since the 60’s and 70’s. Through my own work and work with Carolina Chocolate Drops, as well as the work of other musicians and academics, this knowledge has become better known. People like Alan Lomax and Pete Seeger feared that blacks would become disconnected from the music they helped create, and they were right. So, there is an inherent racial impact of playing this music and discussing those roots.

Why did you think that the old-time American music continues to generate such a devoted following?

I think that America is going through a cultural drought right now. I always remember that during the height of the Iraq war and the recession, our pop songs were about making money and having sex. There is a disconnect between our films, shows, and big music figures and what’s really affecting people. I think there is a devoted following to old-time because it is a music that anyone can make. Also, it has a legacy of introspection, existential inquiry, political dissent, as well as making money and sex.

I would travel to Dockery Plantation in Mississippi, 1928. I’d sit right in front of Charley Patton and see if I could understand anything he was saying. 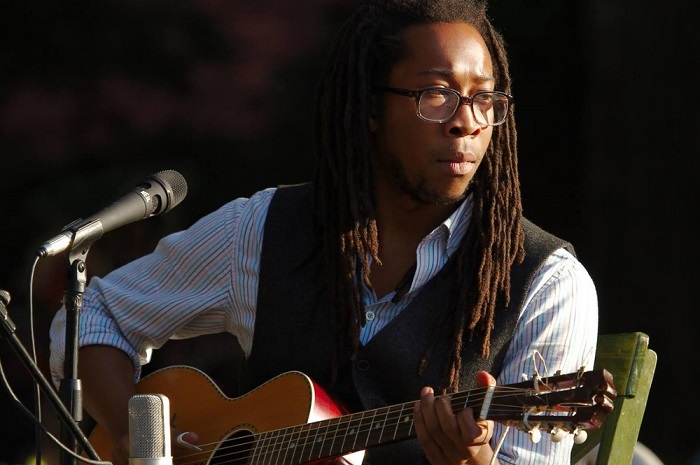