Q&A with musician/actor Bobby "BlackHat" Walters, hails from Cleveland, has been playing harp for over 40 years

"Blues will continue to document the struggles and triumphs of life.  I’ve found that this very passionate music touches the soul of those who hear it and can bring complete strangers together."

Bobby "BlackHat" Walters, recording artist, harmonica player, vocalist, songwriter and actor hails from Cleveland, Ohio and has been playing harp for over 40 years.  Bobby is a retired U.S. Coast Guard Commander with 27 years of distinguished service which included serving as Military Aide to the President and being awarded the Coast Guard Medal for Heroism. Bobby has had the honor of opening for Blues Legends B.B King, Taj Mahal, and Steady Rollin Bob Margolin. Bobby has shared the stage with Kenny Neal, Lil Ray Neal, Jackie Scott, Bill Deal and the Rhondels, Jason Ricci, Eddie Shaw, Daryl Davis, Ruthie Foster, Sherman Robertson, Slam Allen, Tas Cru, and Memphis Gold. In 2017, Bobby won the USAA/We Are The Mighty Mission: Music nationwide competition. In 2016, the Bobby BlackHat Band advanced to the FINALS of the International Blues Challenge in Memphis, TN.  Bobby has won two Blewzzy Awards for "Song of the Year" (I Hear Mama's Voice, 2012 and Please Mr. BlackHat, 2015). 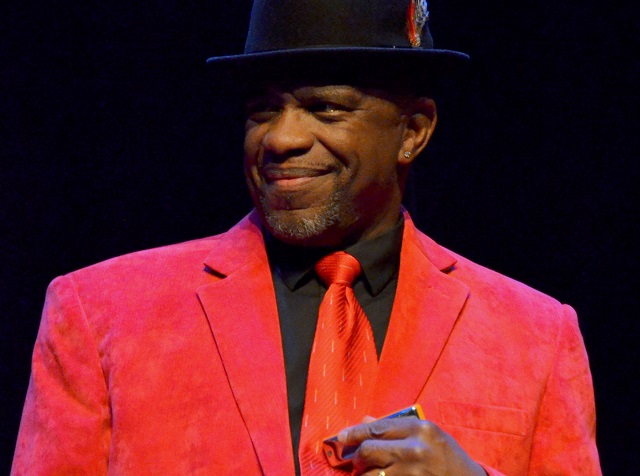 He was also awarded two 2016 VEER Music Awards for "Best Blues" and "Song of the Year" (HRBT Blues). Bobby BlackHat brings together the finest blues musicians in Hampton Roads to perform classic, modern, as well as original blues tunes that will keep your toes tappin and your hips shakin all night long. "I bought my first harp after hearing Lee Oskar play with WAR in 1972. The sound of his harp just mesmerized me and I knew right then and there I was gonna be a harp player too." In 2006, BlackHat added acting credits to his resume when he participated in the filming of the History Channel documentary "Sherman's March to the Sea". Bobby BlackHat’s "Put On Your Red Shoes" (2018) is blends the influences of Chicago, Memphis, Piedmont, and Delta style blues into a toe tappin’, finger poppin’, hip shakin’ blues experience. This project includes: Something Old (updated versions of previously released songs), Something New (brand spankin’ new songs), Something Borrowed (unique covers of classic songs), and of course Something Blues.

It may sound a little cliché, but blues music tells the stories of life. Blues is a storytelling genre. Whether those stories are good, bad, happy, crazy, funny, romantic, or painful. My immersion into the blues has made me more observant and more introspective about. I’m primarily a lyricist and when I start working on new material, I start by making observations of what’s going on in everyday life.  Everybody has a blues story and I try to capture those stories.

What touched (emotionally) you from the sound of harmonica?

In 1972, I had the opportunity to hear Lee Oskar play harmonica (harp) with the group WAR. One minute his harp was sweet and tender and suddenly it was crying and wailing. I was simply mesmerized by what I was hearing, and I bought my first two harps the next day. I think harp is perhaps the most expressive instrument you can play. It's the only instrument that you literally "breathe" music. My sound is generally clean with little crunch and just a touch of delay. I’m not a fancy or busy player. I believe a little goes a long way. I enjoy the pure sound that the harp possesses so I avoid the temptation to over-play or over-produce.

I’m a Coastal Virginia Bluesman who blends the influences of Chicago, Memphis, Piedmont, and Delta, style blues along with a little Gospel into a toe tappin’, finger poppin’, hip shakin’ blues experience. My songbook is about storytelling and I perform primarily original music. I get lyrical inspiration from personal experiences, observing the experiences of others, and sometimes from current events. For example, the inspiration for “Put on Your Red Shoes” came from a sexy pair of red shoes my wife owns; and “I Hear Mama’s Voice” was written as a tribute to my mom. I released “Run Baby Run” as a single in response to the school shooting in Parkland, Florida. My songs range from up-tempo and happy to slow and thought provoking. Some will make you smile, laugh and dance; some will make you think, squirm and cry. I don’t like perfect blues. By that I mean I like blues that is raw, in the moment, with a few imperfections. It’s those imperfections that the band responds to “in the moment” that adds flavor and zest. For that reason, I prefer to record live so we can capture those moments. I once yawned in the middle of a singing a verse during a recording session. It actually sounded pretty cool on playback, so I left it in. And no, I’m not gonna tell you which song it was. 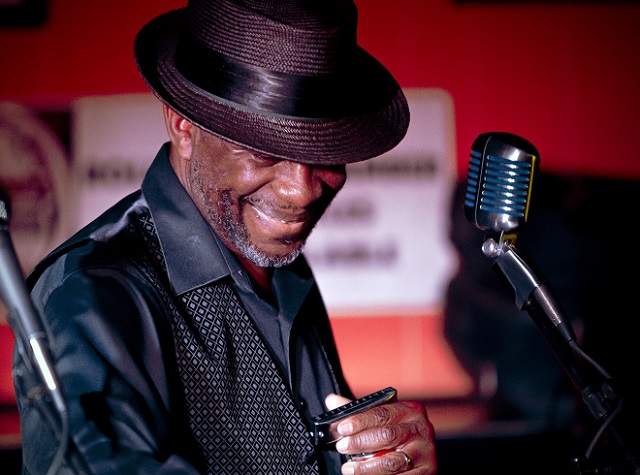 "Blues is so far reaching in its influence that it impossible to fully express its impact on the American and worldwide music scene. You might not notice it, but you hear blues music all the time.  You hear it in movie soundtracks, TV shows and commercials, and even on kids shows like Sesame Street. Blues is everywhere."

I've met so many wonderful and talented blues artists that it’s difficult to narrow it down. I would have to say that meeting BB King is at the top of the list because he was absolutely the most gracious person I've ever met. My short interaction with him has guided me in how I interact with my bandmates, fellow musicians, and my fans. Next, I would say my experience songwriting, performing, and recording with Larry Berwald (former lead guitar player with Wet Willie). Larry sharing his knowledge and experience were invaluable as I learned the who, what, when, where, why, and how of the music industry. I’m still learning.

The best advice I've received came from Taj Mahal who told me I shouldn’t worry about trying to be a clone of other harp players. He said… “there will only be one Little Walter”. He encouraged me to find my own sound and style because… “there will only be one Bobby BlackHat”. He also told me that I should start writing songs because there was music in me that needed to come out.  I wrote my first song a few days later. The other advice came from fellow harp player, Sandy Martin, who recommended that I start singing because it would increase my marketing value and performance opportunities.

Performing at the Orpheum Theatre in Memphis during the 2016 International Blues Challenge Finals was a surreal experience. The thrill of making it to that stage in the midst of so much worldwide talent was an unbelievable privilege and honor. There is a tradition at the Orpheum Theatre where you get to tag the wall with your name to commemorate your performance. As you walk the Orpheum hallways, you see the names of some of the worlds most revered entertainers handwritten on the walls and posters. I was humbled to be given a spot to write “Bobby BlackHat IBC Finals 2016”.

I miss many of the music venues that have closed, especially those that featured blues acts. It seems that more venues are closing than opening and I fear this trend may continue. However, I think musicians and promoters are starting to be more creative. My approach now is to create my own opportunities rather than waiting for someone else to do it for me. For example, rather than fretting about not getting a cool New Year’s Eve gig, I created my own and hired several great blues acts to join me. The inaugural Bobby BlackHat New Year’s Eve Blues Spectacular was a great success and now it’s an annual event. 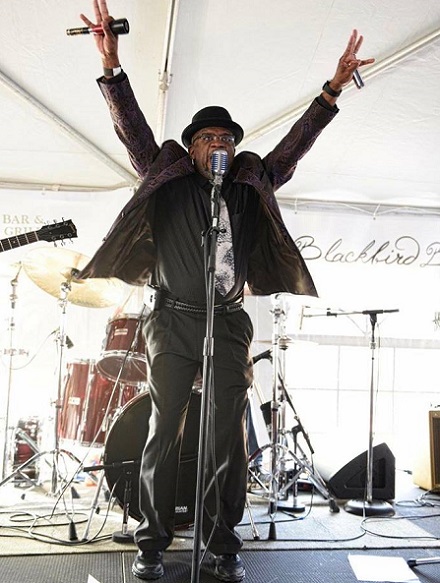 I fear that we will continue to lose live music venues. I hope more musicians will take a proactive approach to control their own destinies by creating new and exciting performance opportunities. I want more musicians/bands to develop “Wow Factor”, that quality that makes an audience feel great excitement, surprise, admiration, or emotion.

"It may sound a little cliché, but blues music tells the stories of life."

I would like to see musicians received the respect and compensation they deserve for the effort they put into their craft and the talent they bring to the stage.

What are some of the most important lessons you have learned as U.S. Coast Guard Commander?

Take care of the crew and they will take care of you. I try to apply that same leadership principle to how I interact with my band. I recognize I'm not a one-man show and that my bandmates are critical to my success in entertaining an audience. Throughout my blues career, I’ve been blessed to be surrounded by fantastic musicians who are also just great people in general. My current bandmates consisting of Tom Euler (guitar), Brian Eubanks (bass), Michael Behlmar (drums), and Lucy Kilpatrick (keyboards) are not only talented but also fun, creative, and dedicated.

Do you consider the Blues a specific music genre, and artistic movement, or do you think it’s a state of mind?

All of the above. Blues is so far reaching in its influence that it impossible to fully express its impact on the American and worldwide music scene. You might not notice it, but you hear blues music all the time.  You hear it in movie soundtracks, TV shows and commercials, and even on kids shows like Sesame Street. Blues is everywhere.

Blues will continue to document the struggles and triumphs of life.  I’ve found that this very passionate music touches the soul of those who hear it and can bring complete strangers together. When someone is having a bad day, the passion of the blues can help them get through it. Through blues I’ve developed close friendships with folks I would otherwise never have crossed paths with.  I love those moments when the music takes over and everyone becomes one family in the groove. In those moments the world gets much smaller and friendlier. As I often say…” Everybody loves the blues, they just don’t know it yet!”

I would love to be in the studio with Willie Dixon or Ray Charles to observe their creative process. To look, listen, and learn how they developed their iconic songs.