Q&A with Onno Smit, Paul Willemsen & Michelle David (The Gospel Sessions) - another side of gospel music

"Gospel, soul, blues was always a force in our lives where we governed ourselves accordingly. Negro spirituals derived from the hardship of those who were being oppressed for the purpose of someone else's glorification."

The Gospel Sessions: Music From Heaven

Gospel music has skillfully and completely been reinvented by Dutch musicians Onno Smit, Paul Willemsen and New Yorker singer Michelle David. They are going back to the origin and essence of the music, but with a new, minimal approach. So you won't get a Hammondorgan where you would've expected it, and the abundance of chords has been scrapped; often, one guitar riff says more than a series of chord changes. The Gospel Sessions Vol. 1 (2015) was an introduction to the project itself. They wanted to show how Gospel music could take on various elements and not be viewed in the same typical fashion that is so familiar to most. 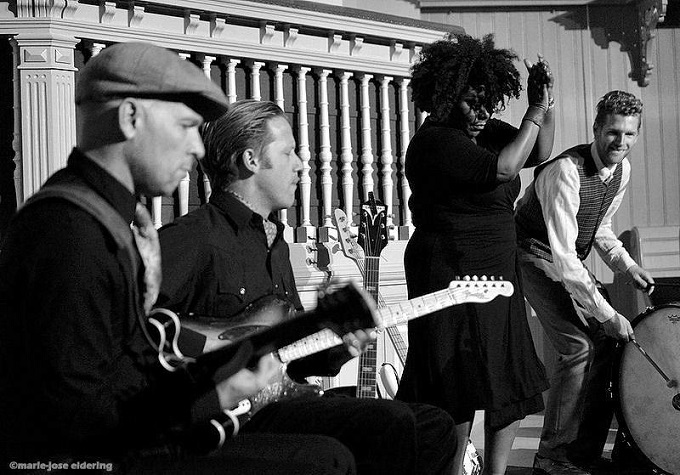 Volume 2 (2016) definitely erases all that you thought you knew about them and gospel. This is a rougher yet vulnerable piece of work.  Michelle David has truly settled in her role and has allowed her personal experience to manifest itself through every word, note and tone. Onno Smit on guitar, Paul Willemsen on guitar and Toon Omen on drums, have opened the door to more instruments without being heavily saturated with the predictable. Throwing your hands up, shedding a tear, evoking deep thought and dancing isn't an option....It's a necessity. So "Buckle up cause it's gonna be another GOSPELIZED ride!!!

What touched (emotionally) you from Gospel? What do you learn about yourself from the Blues and Gospel culture?

Onno: For me it’s all about the rhythm and the repetitiveness of the words and phrases. Like Paul says; The feeling of getting lost in the music, transcendence.

Paul: The feeling of getting lost in the music, transcendence. I don’t know, the music just speaks to me. Culturally I’m in a totally different world.

Michelle: Growing up in the church was my humble beginning with Gospel music. It wasn't a form of entertainment, it was our lives. Having a personal relationship with God puts the words to each song into perspective. What I've learned about myself as I sing Gospel music around the world is that I can remain who I am and not be transformed by others.. I learned the true art of sharing and not forcing what I feel and believe on others.

How do you describe The Gospel Sessions sound and songbook? What characterize project philosophy and mission?

Onno: I’ve been listening to Blues, Soul, Gospel, Jazz and R&B music for all my life. Nowadays a lot of people see Gospel music almost as a theatrical thing with big choirs, Hammond organs and preacher shouting and doing somersaults.  We’ve tried to show another side of gospel music. The less is more feel.

Michelle: Our sound is purely organic. Not a lot of frills and additives. The objective isn't to be perfect but honest. 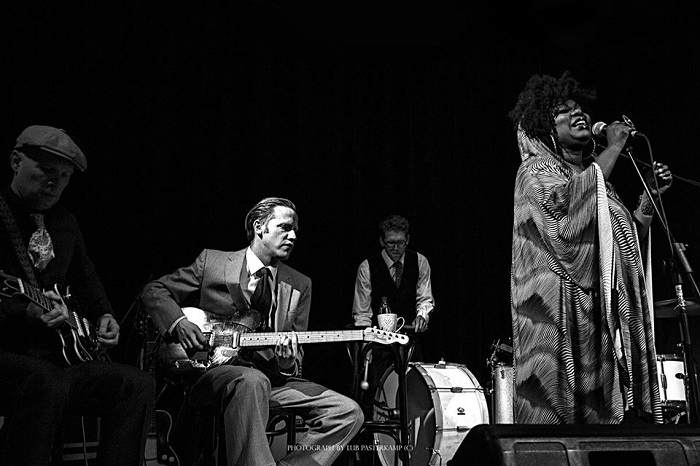 What were the reasons that the band started the Gospel and Afro-American Roots researches and experiments?

Paul: We’ve always been interested in finding out where our favorite music came from, so our love for soul and rock & roll naturally led to gospel music. Then when we met Michelle we saw an opportunity to make some gospel ourselves

Onno: So many good memories. Playing live with the string quartet in the studio for Vol2 was pretty amazing.

Michelle: Each show gives a different feel and reaction. Not only from the public but us as well. I think the most memorable for me at this moment would be the uproar that occurred during our second re-lease concert in Amsterdam... I was singing "I know The Lord" from Vol. 2, I wasn't even half way through the song and the audience went crazy... It was as if someone lit a match under each seat... We all were in awe!! It's a sight I shall never forget.

Onno: The Feel, back then it was more organic. If you wanted to make a good record you had to play well. Or hire some good players to make a top notch album or single. Nowadays anybody can make a song using garage band or whatever.

Paul: I think nowadays all sorts of music are available, the only problem sometimes it’s just too much. The mu-sic I love has people playing together in a room without click track and too many overdubs. I hope someone will figure out a nice way to make money off music on the internet.

Michelle: What I miss is knowing that what you hear on a recording you will hear live (if not better). There is so much tuning and fixing and just flat our falsehood in the studio. It pains me to realize that artist really can't sing. (Laughs)... I hope we get back to the days of "What you see/hear is what you get". That is also my fear. That we won't go back to that. 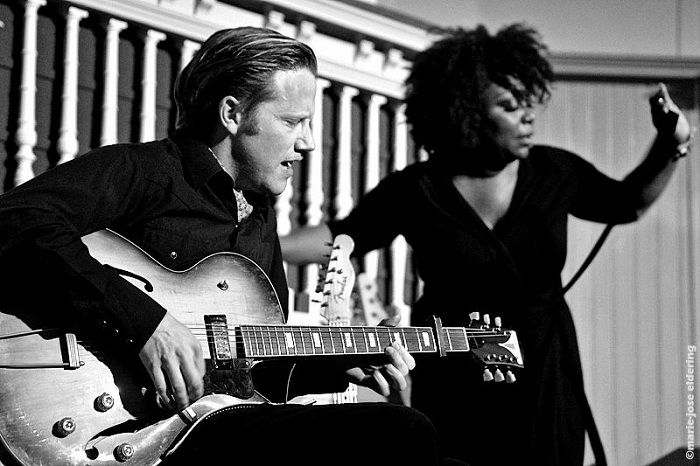 Make an account of the case of Blues in The Netherlands. Which is the most interesting period in local blues scene?

Onno: The 60’s But I wasn’t born yet so I don’t really know allot about it.

Paul: To be honest I don’t know a lot about the blues scene here. I guess it’s been quite big since the 60’s. I personally don’t really stick to one genre so I’m not really part of it.

What are the lines that connect the legacy of music from Caribbean and New Orleans to West Africa and Mississippi?

Onno: I guess the slave trade that brought the African rhythms and storytelling to the rest of the “western” world, so to speak.

Michelle: The lines are deeply rooted... It connects through the drums...The passionate beat that captures the soul essence of the heart.

Michelle: We don't have to fight to be heard anymore. But we do have to fight to stay on top... But I guess all artist have that. In this respect I'm male driven... So I don't see obstacles but challenging opportunities. Our status, well, I'll just quite Beyoncé... "Who runs the World, GIRLS". (Laughs) 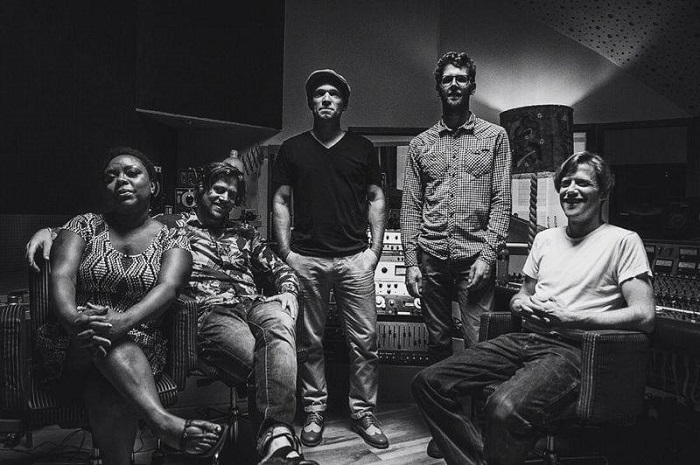 What is the impact of Blues and Gospel music and culture to the racial, political and socio-cultural implications?

Paul: Of course this is a really interesting subject. I’ve read some nice books about it, but I don’t think I’m the person to answer this question. I’m just a musician from the Netherlands.

Michelle: Gospel, soul, blues was always a force in our lives where we governed ourselves accordingly. Negro spirituals derived from the hardship of those who were being oppressed for the purpose of someone else's glorification. Artist such as James Brown, Nina Simone, Harry Belafonte just to name a few have written & sung about the ups & downs of African Americans which had an effect on an entire nation. One of the most prolific songs to date is "Strange Fruit" sung by Billie Holiday. Who could have dismiss the lynching of hundreds, thousands of men and woman whose only crimes were being of a darker shade of humanism.

Onno: September 17, 1950. That’s when Charlie Parker played Carnegie Hall with the big orchestra (Charlie Parker with strings, Live recording). After the show hop in a cab and go to the Three Deuces, Onyx Club and/or Min-ton’s Playhouse. Hopefully see Monk play a set.

Paul: Wow, so many places! I guess Memphis in the early fifties would be high on the list, or New Orleans.

Michelle: I would like to go back to the opening night of the "Cotton Club" in 1923. Where I spent the entire day preparing for that special night in Haarlem...Although it was a white's only establishment they had some of the best Black artist of that time. In my fantasy I would have been one of the headliners...Oh, just to share a space with Gab Callaway, Fats Waller, Count Basie and others...In my illusion, it's the best time of my life. 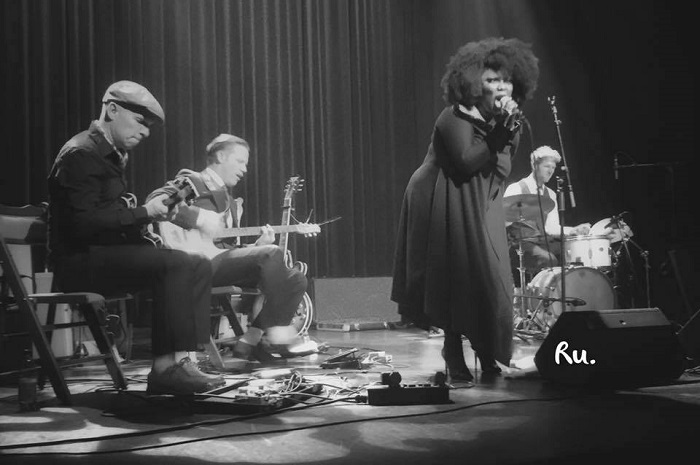