"My hope is that the music affects people in the same way it affected me – brings them enjoyment at the same time as giving them access to the same tools I gained through listening to blues music."

Lyle Odjick: Through The Rain

Originating from the Algonquin reservation of Kitigan Zibi, QC, now based in Ottawa, ON, Lyle Odjick went from living in a small town with very little exposure to blues or live music to teaching himself harmonica and starting his own blues band. After playing one gig with a borrowed house band, he knew he needed to scout out some local blues musicians on the Ottawa scene to form his own blues band. Less than a month later “The Northern Steam” was formed and became a solid foundation for his Chicago blues harmonica driven sound. What began as a blues cover band with a fat swinging rhythm section and a harmonica wielding front man has evolved into a high energy blues-rock band with their own foot stomping sound. With a burning desire to play on stage, Odjick went from strumming in a small town to opening for heavy hitting acts such as Colin James, Randy Bachman, MonkeyJunk, Paul Reddick and more. 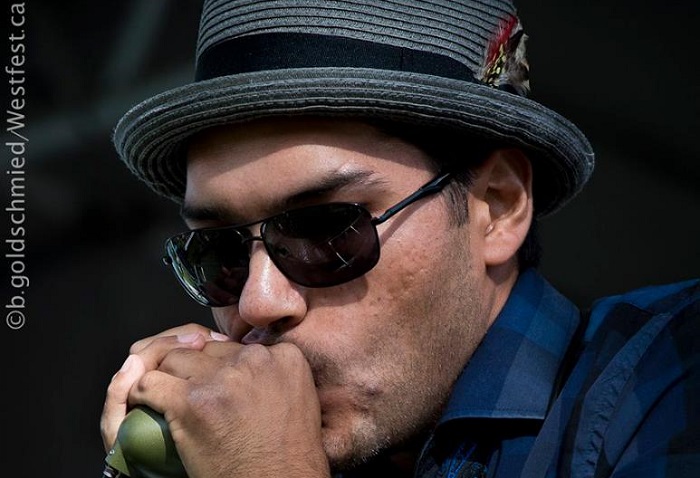 Through The Rain, the long-awaited debut album by Lyle Odjick & The Northern Steam is set to be released June 10, 2022. A 10 song blues rock album recorded primarily at Tone King Records and mixed/ mastered/produced by Jason Fryer. All vocals were recorded by band keyboardist Sean McGee inside his personal studio. Album consists of eight original tracks written by Lyle Odjick as well as two covers of old blues favorites “Leaving Trunk” made popular by Taj Mahal as well as “Rock This House” by Jimmy Rogers. Featured musicians on this project include The Northern Steam’s Ben Griggs on rhythm and lead guitar duties, Fred Sebastian on drums and Sean McGee on keys/organ, and special session players Mike Turenne on bass, Jason Fryer on lead guitar, Tanya Paulin on background vocals for “Rock This House” and Tony D (MonkeyJunk) on lead guitar duties. All lead vocals and harmonica are performed by Lyle Odjick as well as rhythm guitar duties on “Through The Rain”, “Bad For You” and “Devil Man’s Dues”.

In following my passion for the blues, the most important thing I learned about myself was how to walk my own path and stick to it regardless of what others around me are doing, saying or what others around me want me to do. Coming from a small town during a time when the only paths to success that were presented to me were “go to school” or “play hockey”, going against the grain has allowed me to become the person I was meant to be through following my own avenue. I never imagined another way to find my place in this world can be found through music.

The most important part of the blues for me is the ability it has given me to not only express and heal myself emotionally but also connect with those around me through my music in the same way I feel connected to the blues artists I enjoy listening to. Years spent with emotions bottled up inside with no way out can lead to serious mental health issues, in my case writing and performing blues music went from a private coping mechanism for my feelings to a public form of healthy expression and maybe even full-time career path. As an Indigenous person researching the blues and its origins, I noticed similar themes and feelings being presented by many delta blues artists that share common ground with my people's experience of post-colonialism life and trying to find our own way in a new world after ours was taken away by force. Digging into these common deep-rooted feelings of pain, loss and assimilation has allowed me a direct connection to the origins of the blues and has given me the tools to deal with such feelings. Through writing and performing my music it is my hope that I can provide the same access to such tools for other Indigenous listeners that might be struggling with the same feelings.

Our sound in four words - “High Octane Blues Rock”. After hearing amplified blues harp on a Muddy Waters track for the first time, I knew that's what I wanted to sound like. I then sought out to build a band around that sound, drawing heavy influence from Chicago blues artists such as Muddy, Howlin Wolf, Little Walter and Buddy Guy. Prior to starting “The Northern Steam” I had one song written - “Devil Man's Dues” which was originally based in an acoustic delta blues style. Once I knew I had the building blocks in place to have a rockin Chicago blues style backing band, I took a page out of Muddy's book, plugged in and amplified what I already had and began pumping out more original music based on that sound. The other end of my creative drive comes from growing up as a rocker listening to bands like AC/DC, Aerosmith and The Rolling Stones, who were all originally blues based bands who took the music in their own direction. At the end of the day my sound and creative drive comes from the combination of my love for the blues mixed with an underlying childhood dream to become a rock star. 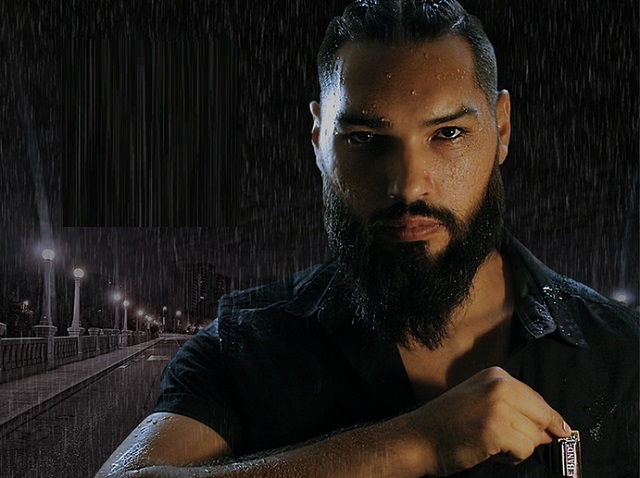 "What I miss most about the blues of the past is the mere fact that all my blues mentors and idols have passed on long before I could ever watch them perform live. My fears for the blues of the future are that the younger generations may not gravitate towards those sounds, causing the music to slowly disappear."

Do you have any interesting stories about the making of debut album "Through The Rain"?

One interesting story about the making of "Through The Rain" is the fact that the debut album was originally going to be called "Harpin & Howlin" after my original harmonica instrumental. The change of name came from the hardships and multiple delays incurred during the recording process. Every type of delay was encountered from car breakdowns to weather issues on recording days, booking availability between session players, studio availability to funerals of friends or family that also collided with studio bookings. Not to mention the two-year delay that COVID added onto an already delayed project that was set to finally release summer 2020. By the time we got to a guaranteed release point we metaphorically and physically had to work "Through The Rain" to get the job done.

What I miss most about the blues of the past is the mere fact that all my blues mentors and idols have passed on long before I could ever watch them perform live. My fears for the blues of the future are that the younger generations may not gravitate towards those sounds, causing the music to slowly disappear.

The most important lessons I have learned from my experience in my music paths are not to rush yourself, when you are ready the proper time and opportunity will present itself. As well I've learned to trust my instincts and stay on the path that I have chosen, as persistence and consistency are the keys to achieving goals. 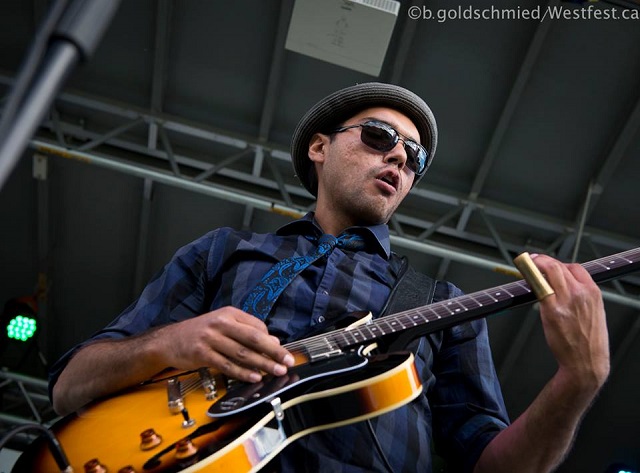 "Our sound in four words - “High Octane Blues Rock”. After hearing amplified blues harp on a Muddy Waters track for the first time, I knew that's what I wanted to sound like. I then sought out to build a band around that sound, drawing heavy influence from Chicago blues artists such as Muddy, Howlin Wolf, Little Walter and Buddy Guy." (Lyle Odjick / Photo by Brian Goldschmeid)

What music moment changed your life the most? Are there any memories from gigs, jams, and open acts which you’d like to share with us?

The single moment that changed my life the most was the first time I took the stage. I was about 26 years old. It was my first-time playing harmonica with a band, first time playing in front of an audience, first time singing and first time performing anything on stage and I chose to enter a blues harmonica competition for experienced players. The backing band was Juno award winning Canadian Band "MonkeyJunk", the bar was full, and I have never been more nervous in my life. When my name was called, I hit the stage with my one harmonica in hand while every other contestant had many. The bright lights turned on temporarily blinding me from the crowd, Steve Marriner led the band off into a Chicago shuffle and away I went blowing my heart out and singing the blues the best I could. Once the first song ended and all I could see was the silhouette of a crowd erupting to their feet in applause and cheers. After my four songs were done, I exited the stage to handshakes, business cards and questions of who I was and where I came from. Though I did not win the competition, it was that moment I stepped off stage I knew exactly what I was meant to do with my life.

What is the impact of Blues n' Rock music on the socio-cultural implications? How do you want the music to affect people?

Some people are purists and believe that blues and rock are meant to remain separate, I on the other hand believe that they can be enjoyed on their own, or blended together in different ways. Taking the blues and mixing it with different styles of music, especially rock, makes the music more accessible to a broader audience. A modern day rock fan who stumbles onto some blues-rock they enjoy often find themselves searching further down the blues rabbit hole and discovering the many other artists and blues genres they weren't previously aware of. With a bit of research any rock fan can learn that Rock n Roll was derived from the blues, to quote Muddy Waters - “The Blues had a baby, and they named the baby Rock n Roll.” My hope is that the music affects people in the same way it affected me – brings them enjoyment at the same time as giving them access to the same tools I gained through listening to blues music. 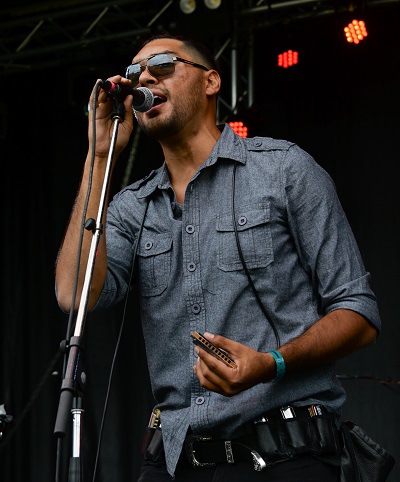 "The most important lessons I have learned from my experience in my music paths are not to rush yourself, when you are ready the proper time and opportunity will present itself. As well I've learned to trust my instincts and stay on the path that I have chosen, as persistence and consistency are the keys to achieving goals."

If I could spend a whole day somewhere in time it would either be to go back to spend a day in the studio during the recording of Muddy Waters' Hard Again album, produced by Johnny Winter. The album has a variety of amazing players on it, and it represented a blues revival time for Muddy when he hadn't recorded for quite a while. It would be amazing to be in that studio to learn and just enjoy the performances and see how it all goes down with powerhouse players like they have in that room. The other option would be to travel back in time to the early juke joint days and witness a live performance by the legendary Robert Johnson.