"Music is supposed to be beautiful, it should move your heart and it shoul move the hearts of the listeners."

Kinga Głyk is 19 years old, and she has played more than 100 concerts around the country and abroad. Kinga has played with outstanding musicians from the Polish music scene. Kinga's second album 'Happy Birthday - Live' relesed in 2016. Her adventure with music began at the age of 12, when she became a part of a family Glyk PIK Trio with her father Irek (well-known vibraphonist and drummer) and her brother Patrick (drums). Despite her young age, she has already played with many great musicians like Robinson Jnr, Bernard Maseli, Ruth Waldron, Natalia Niemen, Jorgos Skolias, Apostolis Anthimos, Leszek Winder, Paweł Tomaszewski, Grzegorz Kopolka, Joachim Mencel, Arek Skolik, Mateusz Otremba (Mate.o), Marek Dykta, and Piotr Wyleżoł. 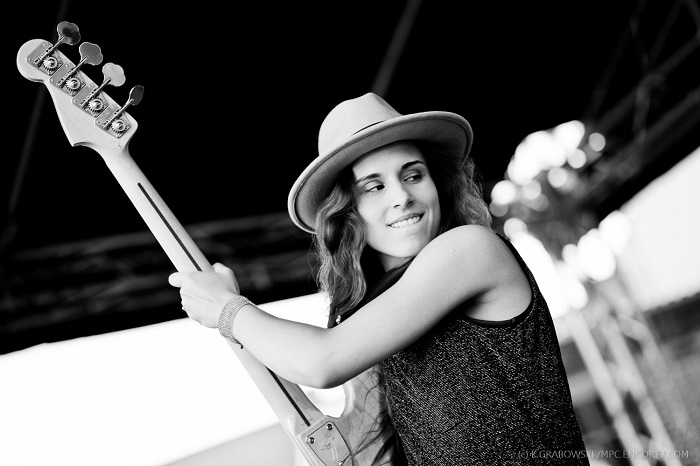 Today, King Glyk is considered the best Polish bassist representing the young generation and she is a rising star of jazz and blues music. In March 2015, she released her debut album Registration (‘Rejestracja’) which was recorded with such musicians as: Natalia Niemen, Joachim Mencel, Junior Robinson and Jorgos Skolias. The album received very good reviews from the Polish Radio 3 (‘Radiowa Trojka’), Magazine “JazzForum”, and “Your Blues”. The album consists of Kinga’s own compositions, but it also has some famous works by other composers with Kinga’s brilliant arrangements. Particularly noteworthy is the interpretation of Bob Dylan’s “Gotta Serve Somebody” sung by Jorgos Skolias, or a very well arranged track by Czeslaw Niemen – “Dolaniedola”. The whole composition is emphasized by perfectly pulsating bass guitar parts.

What do you learn about yourself from the jazz and blues music and culture? What does the blues mean to you?

Since I was a child music has been around me and it has always had a great meaning for me. It has already taught me a lot and it still does, it's a work in progress, I would say. On one hand, it's extraordinary, and on the other it requires a lot of sacrifice. It also makes you think, it gives you joy and the feeling of fulfillment. You can't lie to music, I would even say that to a certain extend we can see it as a person or as a relationship. If you stop taking care of it becomes weaker and weaker. While I was reading the history of blues and jazz I've noticed how those two genres intertwine. How many different aspects have shaped them and how they have evolved. It's true that this type of music gives you certain amount of freedom, but you have to be aware of certain rules that you need to obey, if you want to develop your music skills. I loved blues since I was a small girl, blues makes me tick.

I began playing pretty early, when I was 12 years old I gave my first professional concert. This was a chance to develop not only technically, but it was also a great opportunity to learn how to cope with stress and how to interact on real stage. I think that I got bitten by the 'Jazz/Blues bug' thanks to my dad who is also a musician. For me creating is something that comes from your soul. I use sound to express it just as a painter uses various colors or a writer uses words. I don't think that there's a fixed set of rules or a strict philosophy of playing. Music is supposed to be beautiful, it should move your heart and it shoul move the hearts of the listeners. Those can't be just empty sounds, played at a slower or faster pace, I always keep that principle in my mind when I play.                               Kinga Głyk on stage / Photo by Krzysztof Grabowski 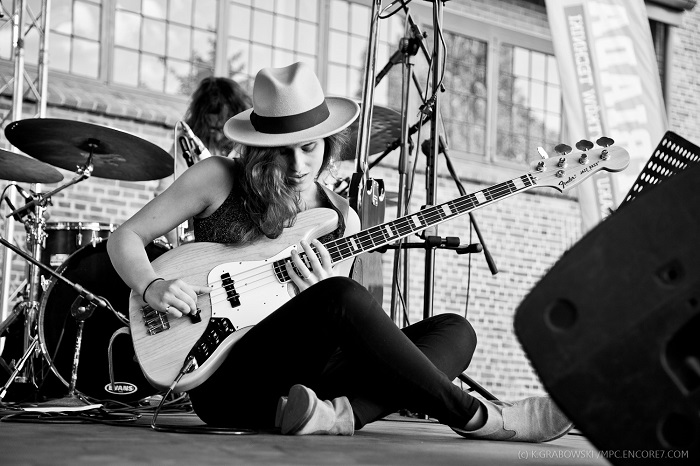 "I'm quite happy to live in a 'Man's World.' I'm pretty sure that this state of affairs, that a man is the strong leading force has been planned from above. I think that the same principle applies to music."

I had the privilege of working with the top Polish musicians and I've learned something from each of them, in both professional and private context. I'm still a young person so I'm constantly learning something new. However, there were those encounters that have particularly stayed in my mind. One took place in Bratislava, where I was playing in front of Cory Henry, who is one of the artists that made a great impression on me because of both his music and amazing improvisation skills. The other one was the advice that I've been given by Mr. Adam Makowicz, a Polish jazz legend, master of improvisation and a distinguished pianist, who once came to my concert, and I would never forget what he told me that day. He said to me: 'Remember, try never to play better than you can. Just try to play your best.' This is extremely important since when you go out onto the stage you always try to give the best of you and sometimes, because of the emotions or the willingness to please the audience, you might fall into the temptation of outdoing yourself and this has always a detrimental effect on the beauty of music. After that you need to get back home and spend long hours practicing.

I experience each appearance on stage differently. The audience is different, we've got new emotions and new experiences. A concert is an indescribable experience, an unforgettable meeting with people. Studio sessions, on the other hand, are totally different, generally speaking those two phenomena don't have that much in common. Personally, I feel best during concerts, where there's this incredible energy and emotions that you can share with other people. The most fascinating concert that I had given until now and that will remain in my memory forever was the concert promoting my second CD: Kinga Głyk 'Happy Birthday' live. It was one of the most exciting musical event I had by now, and a wonderful memory. Because of the fact that it is quite recent I'm still reliving it. 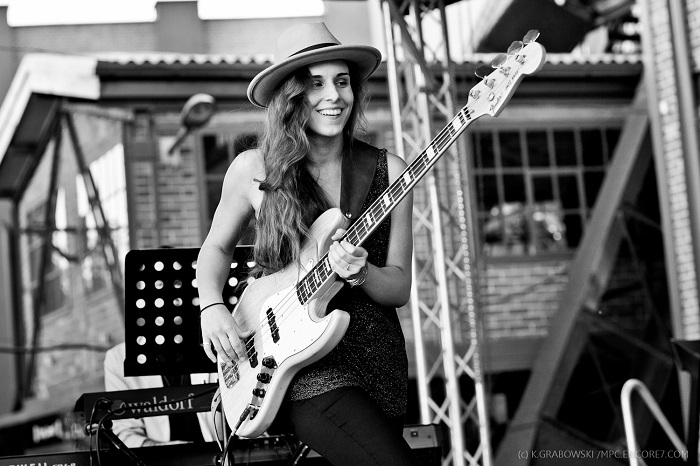 "As to jazz music in Poland I think that this kind of music is gaining popularity among people. There were a lot of jazz and blues musicians who have significantly influenced the shape of music that we listen to in today's Poland." (Kinga Głyk / Photo by Krzysztof Grabowski)

Because of the fact that I'm quite young my only point of reference concerning the comparison between up-to-date music and the music from the past includes mostly watching concerts and listening to performances of great music legends and geniuses of various musical styles. That is how I reached the conclusion that modern music lacks charisma, this certain kind of magic. The vast majority of contemporary artists appear only for one season or two, I mean that we don't have a lot of artists who stay in our memory for long. In the past the access to advanced recording or amplifying equipment was limited and yet a lot of listeners like to 'get back to the roots' and listen to the sound of the music from the past. Sometimes it scares me to see that the music actually lacks music, I know that it might sound awkward but this is how I feel. When you listen to certain pieces of music from the past you can feel that they are conveying a message, a history, those are not merely sounds. Nowadays it's easier to get to the information that would enable you to learn how to play and there's a lot of people who are learning to play or are already singing or playing. Unfortunately, only some of them are truly able to captivate the audience by means of their music. As I have already said before, music isn't only about sounds, it's a story expressed by means other than words. I'm not limiting myself to Jazz only. I try to stay open to other music styles.

Sometimes I wish I could change the attitude of certain musicians towards music.

I'm quite happy to live in a 'Man's World.' I'm pretty sure that this state of affairs, that a man is the strong leading force has been planned from above. I think that the same principle applies to music. Men are stronger and we can see it, for instance, in the way they play on an instrument. Women on the other hand are more sensitive and softer. I don't think that we can say whether one is better or worse from the other. They definitely differ and each has something special to offer, which we can hear in music. Seeing a female bass guitar player is gradually becoming more common, and I have to admit that I have never experienced any form of criticism concerning my choice of instrument, quite the opposite is true, it's perceived as an asset. 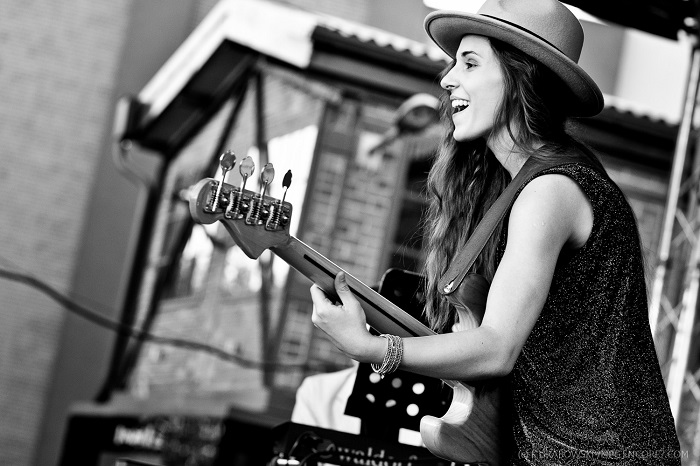 "It's true that this type of music gives you certain amount of freedom, but you have to be aware of certain rules that you need to obey, if you want to develop your music skills. I loved blues since I was a small girl, blues makes me tick." (Kinga Głyk / Photo by Krzysztof Grabowski)

Make an account of the case of Jazz/Blues in Poland. Which is the most interesting period in local scene?

As to jazz music in Poland I think that this kind of music is gaining popularity among people. There were a lot of jazz and blues musicians who have significantly influenced the shape of music that we listen to in today's Poland. In order to establish the most interesting period in Polish music history, we would have to do a thorough research, since this is not an easy question to answer. Every period of music history has something inspiring, new and special in it, and there are people who deserve to be recognized because they made those moments memorable.

What is the impact of Blues and Jazz music to the racial, political and socio-cultural implications?

This is a very complex question, and frankly speaking I'm not in the position to answer it. I'm still too young and lack the necessary knowledge and experience, and that's why I think my answer would be insufficient.

And is it possible to move backwards? Then I'd like to take lessons from Jaco Pastorius! 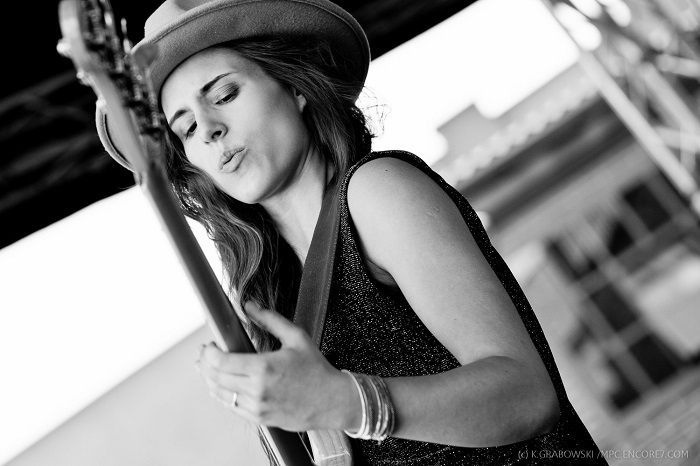