"Many blues artists (also in Germany) take a clear stance against what is happening everywhere in Europe and in the U.S. at the moment. Musicians from other countries and cultures enrich the scene enormously and quickly make friends. But that is not limited to blues, artists from all genres take a stand for cultural diversity, and that’s good."

Verlag Dirk Föhrs is the publisher of German magazine “bluesnews”. The family business was founded in 1994 and is located in Altena in the middle west of Germany. Since 1995, bluesnews is published quarterly; it is a magazine that appeals to blues lovers & aficionados as well as blues musicians. Since its first issue, the circle of regular bluesnews readers has been growing continuously; the number of subscriptions has been increasing by up to 10% each year. bluesnews offers in-depth interviews with international and German artists as well as features covering current topics. Extensive CD, DVD and book reviews, up to 150 per issue, are another focus. 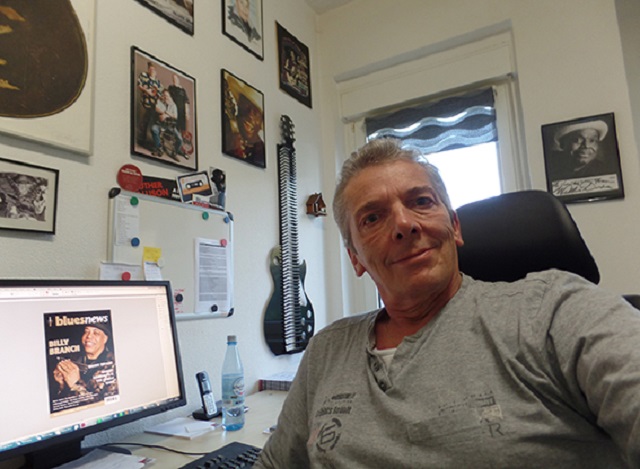 The editorial scope also comprises news from the blues scene, concert and festival announcements, historical features (“Blues History”, “Milestones of Blues Recording”, etc.) as well as the presentation of young artists (“Blues Future”). It is the editorial policy of bluesnews to keep in close contact with its readers in order to obtain as many suggestions and requests as possible. Because bluesnews is not only a special interest magazine for Blues, Blues-Rock and related styles, it is also a magazine made by Blues fans for Blues fans. "bluesnews" is the largest German-language Blues & Blues-Rock magazine; available at newsstands in Germany, Austria, Luxemburg and Switzerland; on the market for 24 years with more than 5,000 subscribers.

To be honest, hardly at all. It was the other way around for me, at one point I discovered that the blues fits me, corresponds to my views, attitudes, etc. Although I already heard my first blues recordings in the mid-1970s, I didn’t know much about the historical background then (I was 15). For the next ten years I didn’t really concentrate on blues, that didn’t start until the mid-1980s when I really got into blues concerts, collecting blues records and reading books about the blues.

What were the reasons that you started the 'bluesnews'? How do you describe magazine's philosophy and mission?

It all started with the book “Blues Guide Germany”, which I published in 1994. It was a listing of several hundred German clubs, festivals, bands, agencies, etc. I simply wanted to inform people where blues concerts took place and which German bands played blues. Shortly afterwards, the then-active German blues magazine (Blues Power) was discontinued, and so I published the first issue of bluesnews in April 1995. It was more or less an accidental product.

“Discovering new things, preserving the old”, is the bluesnews motto. I wouldn’t necessarily all it a philosophy. We report on current activities and new CDs, announce tours, festivals, etc. and feature groundbreaking artists and recordings in our “Blues History” series. One particular characteristic of bluesnews is that not only the international blues scene is covered, but that the blues from/in Germany also plays a major role. 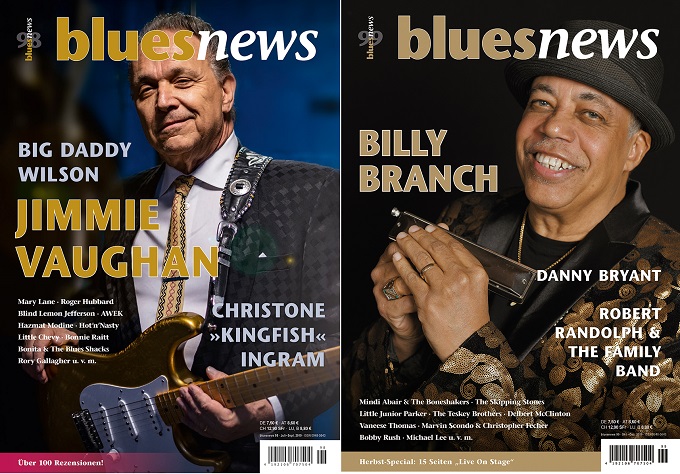 "I would wish for more appreciation of the artists. That more blues fans would go to concerts and buy the artists’ CDs so that they have a better income." (Photo: "bluesnews" covers)

What is the hardest part of editing a blues magazine in Europe? What do you learn about yourself from the Blues people?

The financial situation becomes increasingly difficult. On the distribution side (newsstand sales) there have been many negative changes for smaller magazines. In addition, younger people don’t buy magazines anymore, they get their information on the internet from so-called “influencers”. I hope that bluesnews as an independent print magazine will continue to operate for a couple of years.

Through the contact to musicians, promoters, etc. I have adopted a different view of a few things. For example, at the beginning I wasn’t aware of the fact that even the better known blues artists can hardly make a living from their music. I have great respect that they still keep on doing it with a lot of passion. One can feel this passion, often on recordings, but even more in concerts.

Are there any 'backstage' memories from interviews which you’d like to share with us? What has made you laugh?

I don’t have many backstage memories, because I hardly ever get a backstage pass from promoters. My funniest memory is from after an interview with Duke Robillard. The concert took place right after the interview and the club was so crowded that it was impossible to get to the front of the stage to make photos. The promoter helped me and took me to the back entrance. Then he pushed me through a door and in the next moment I stood right beside Duke Robillard on the stage. During the concert, of course. Duke said: “Hi Dirk, you got another question”, and the band broke out in laughter and stopped playing. I was so embarrassed, I turned red as a beetroot!

Until about 10 or 15 years ago, traditional or classic U.S. blues bands often toured Germany. Nowadays such bands mostly play elsewhere in Europe and seldom in Germany. Bluesrock, on the other hand, is very popular. I think it’s a pity that traditional blues is less present in Germany at the moment, but that’s just my own personal taste. The contents of bluesnews reflect what’s going on at present. But I personally hope that there will soon be something of a revival, like the retro blues trend in the 1990s. 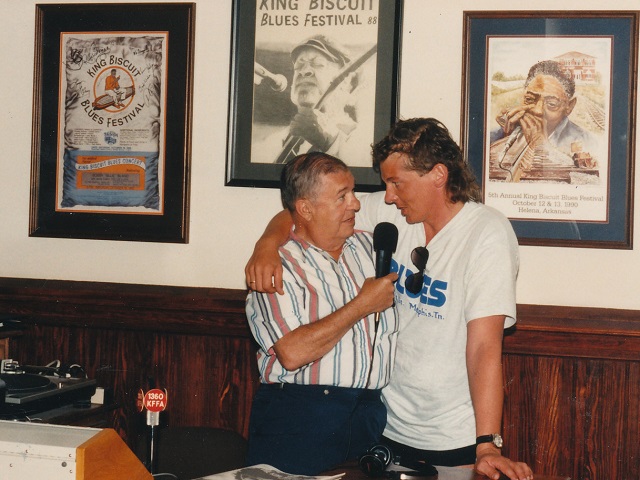 bluesnews is the largest German-language Blues & Blues-Rock magazine; available at newsstands in Germany, Austria, Luxemburg and Switzerland; on the market for 24 years with more than 5,000 subscribers. (Photo: Verlag Dirk Föhrs with the late great "Sunshine" Sonny Payne during the King Biscuit Time radio show on KFFA in Helena, Arkansas 1996)

If you could change one thing in the musical blues world and it would become a reality, what would that be?

I would wish for more appreciation of the artists. That more blues fans would go to concerts and buy the artists’ CDs so that they have a better income.

From my point of view the German blues scene is very lively. Although many of the large blues festivals have been discontinued, new, smaller ones have been established and several blues associations have been founded that enliven the scene with new ideas. There are also very talented younger musicians and bands. It remains to be seen whether they keep at it.

Many blues artists (also in Germany) take a clear stance against what is happening everywhere in Europe and in the U.S. at the moment. Musicians from other countries and cultures enrich the scene enormously and quickly make friends. But that is not limited to blues, artists from all genres take a stand for cultural diversity, and that’s good.

To attend a concert by Slim Harpo or T-Bone Walker. Both are among my huge favorites. 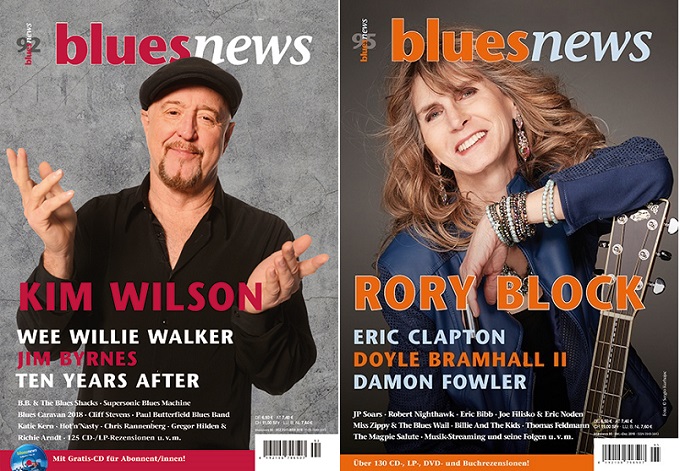