"It (music) has always been helping yourself and the people who listen to you to forget for as long as possible all the troubles that surround us all."

Baritone sax specialist Doug James was born in Turlock, California in 1953. An early interest in music was encouraged by his mother, an organist in his father's church. Aside from these early lessons Doug is largely self-taught, but later on had perhaps the most valuable learning experiences a sax player could have, working night after night alongside some of the all-time greats of rhythm & blues saxophone, most notably Red Prysock, Sil Austin and blues-to-bop master Eddie "Cleanhead" Vinson. In 1970 Doug found himself in Rhode Island just as guitarist Duke Robillard was adding horns to the original version of his band Roomful of Blues. Now christened "Mr. Low" (after a song Joe Williams recorded with the Red Saunders Orchestra called "Blow Mr. Low", featuring McKinley Easton on bari sax), Doug held down the bari sax chair until 1998, participating in countless tours across the USA and Canada as well as Europe, Scandinavia, and Japan. As a member of Roomful, one of the pace-setting bands of the blues revival, Doug often backed blues and swing greats like Roy Brown, Helen Humes, LaVern Baker, and Jimmy Witherspoon, comedians John Belushi and Dan Ackroyd (in the first incarnation of the Blues Brothers Band), and jamming with stars like Muddy Waters, Freddie King, Junior Walker, Buddy Guy and Bonnie Raitt was all in a days work. 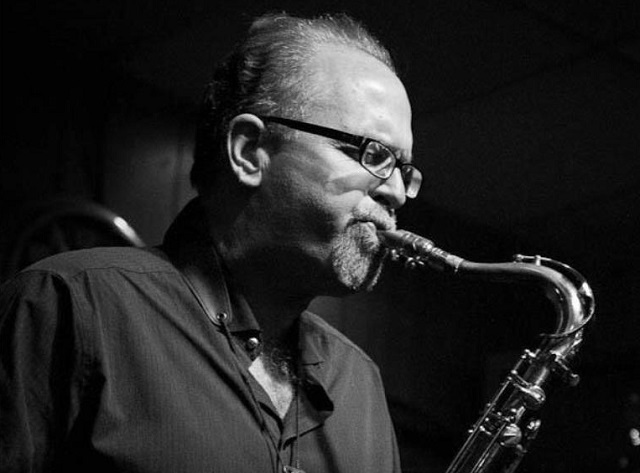 How has the blues, r&b, and jazz music affected your views of the world and the journeys you have taken?

It’s been wonderful to travel all around the world to places I never would have been able to go to. Certainly, the historical places that I knew of but many I didn’t. I think that for me, the big takeaway is that politics comes and goes, or more properly, stays exactly the same, but what happens when people can come together and listen to something good never does lose its magic. That is why musicians will eat shit and lose everything but all they really miss is getting up there and playing.

How do you describe your sound and music philosophy? what touched you from the sound of saxophone?

When I was growing up, the predominant sound for saxophone was John Coltrane. Later on, he did the free jazz thing and that’s when I heard Pharoah Sanders and Archie Shepp. I really liked them because of their big sound and a more vocal quality to their playing. When I met Roomful of Blues, I thought I knew almost everything about blues. Well, I didn’t! I had followed Chicago blues since I was 11 and knew about that, but Duke Robillard turned me on to all of the great 50s R&B sax players like Red Prysock and Syl Austin and so many others. Also, the great swing guys like Lester Young and Coleman Hawkins. There were so many people that I had never heard before. It was a revelation that I still haven’t fully explored. The idea of not just playing a million notes even if they are great notes and making a statement without extending harmony to where things are unlistenable was very freeing. In my own small way, when I play, it is to infer the extra notes in the extended chords rather than to spell them out like some kind of musical calisthenics. When I first heard Pepper Adams on Charlie Mingus’ “Moanin’”, that’s when I wanted to play bari sax. The baritone and tenor sax are what move me the most. 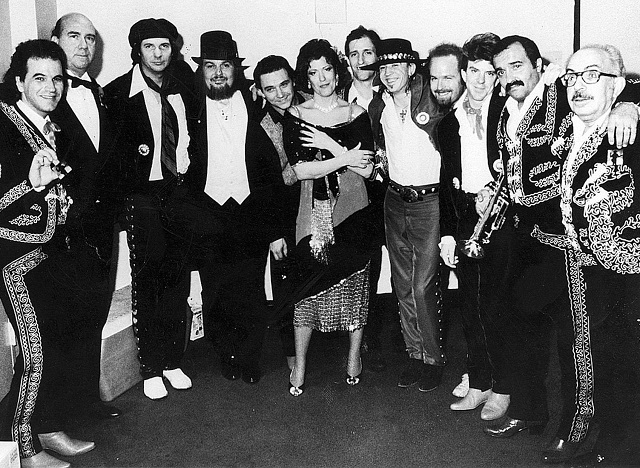 "Never change what you think you should do on a set to please the audience because you don’t really know what they want. Just play with balls and really mean it." (George Rains, Doug James with Roomful of Blues, Dr. John, Stevie Ray Vaughan & Double Trouble, Jimmie Vaughan, Angela Strehli at Carnegie Hall, October 4, 1984 New York City / Photo © by Chuck Pulin)

Heywood Henry: “More people know about me in Russia than in Birmingham, Alabama”.

Syl Austin: Going to a diner after the gig: “I didn’t’ come all the way up here to have you kill me in a drunk driving accident, motherfucker!”.

Red Prysock: After I told him he sounded great: “You sounded like shit, motherfucker”.

Eddie “Lockjaw” Davis: After telling him I was taking flying lessons because I was tired of driving at 18 years old: “Oh, yeah? What happens if you get fogged in and can’t make the gig, or you get rerouted to a city 8 hours away? Then they’re going to get a baritone player that ain’t so crazy and you’re out, Jack!”.

Count Basie: When I met him, I couldn’t think of anything to say, so I asked him where he was playing next-“Never mind about all that”.

Eddie “Cleanhead” Vinson: “When you play all those festivals and they fuck with you turning you up and down, just play the same. Don’t play any louder. It will fuck with your intonation.”.

Mac Rebennack: Telling me about his nephew that we were about to score from: “I done told that little motherfucker a thousand times “just shoot dope, don’t shoot Coke!”.

Albert Collins: Every time I met him at the club he was playing when he pulled up in his van with his dog in the passenger side: “Let’s go in and have a drink!”.

Robert Jr. Lockwood: Now you know you’re white, so you’re going to make more money playing blues than me, but don’t worry about that, JUST GET THE MONEY!”.

Howlin’ Wolf: When someone in Roomful called him an old man: “You keep on livin’, you’ll be an old man too.”.

And so forth. And a million more. I have tried to pass on some of this hard-won wisdom to the kids just starting out. They listened about as much as I did. 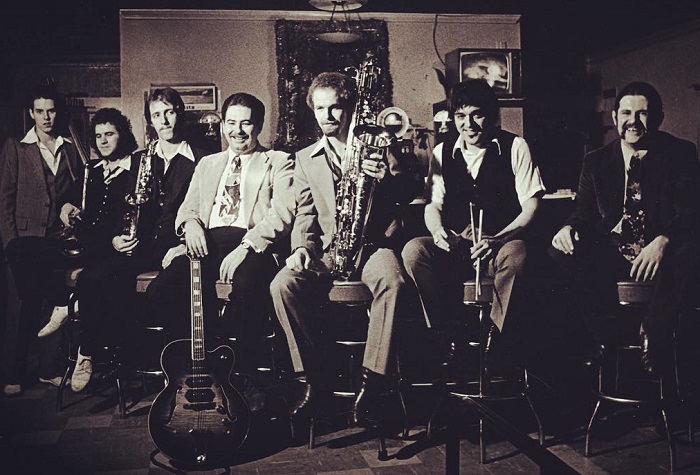 "It’s been wonderful to travel all around the world to places I never would have been able to go to." (Early days of Roomful of Blues at the Knickerbocker Cafe, Westerly RI, 1978 / Photo © by Vinnie Scarano)

What has made you laugh and what touched you emotionally from the early days of the Roomful Of Blues era?

Well, there was plenty of laughing and plenty of crying. There are people out there when you’re playing low down clubs that are unbelievable. Some very funny dancing as well. What was great was when people realized that they liked what we were doing. We got such a great response in these clubs just stuffed until it seemed like the whole building was rocking back and forth.

Are there any memories from gigs, jams, tours, and studio sessions which you would like to share with us?

I’m trying to think of something lighthearted. One of my favorite things way in the beginning was Roomful had a gig in Poughkeepsie, NY in an actual theater instead of an Italian-American club or small bar that we were usually playing in and it actually had a curtain! As we assembled behind the curtain and were ready to play, I heard the announcer introduce us AND NOW LADIES AND GENTLEMEN, ROOMFUL OF BLUES! Whereupon the curtain rose and stopped rising at about our knees! So, we played 2 songs with just our feet. Roomful of Shoes.

What do you miss most nowadays from the music of the past? what are your hopes and fears for the future?

Well, the future at the moment is completely unforeseeable. So, I will say that back when Roomful of Blues and the Thunderbirds, Robert Cray, Stevie, Los Lobos, and so many more were in the same town, we’d all play with each other and hang out til dawn. Whenever Albert Collins was around, you better have your horn, or you’d have to go get it. I remember playing with Rockin’ Doopsie all night in a club in Copenhagen. I had a great time. I’m not sure if everyone around me had a great time also, but you can’t please everyone. In Providence, I had a few places I could call up and bring a band in to play 2 days before. So, I miss that but I don’t think I could do it again.

What were the reasons that Rhode Island in the 70s was the center of swing blues researches and experiments? 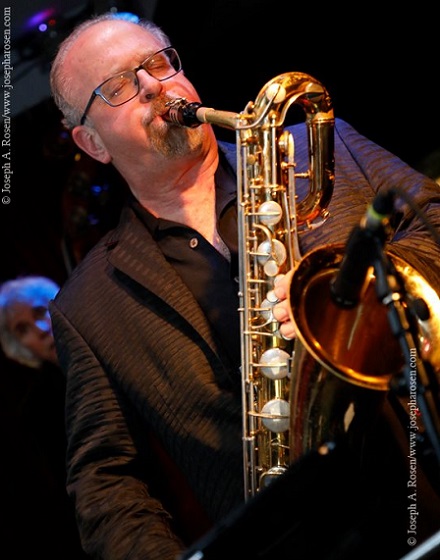 "When I was growing up, the predominant sound for saxophone was John Coltrane. Later on, he did the free jazz thing and that’s when I heard Pharoah Sanders and Archie Shepp." (Doug James, 2019 / Photo © by Joseph Rosen)

What are some of the most important lessons you have learned from your experience in the music path?

Never change what you think you should do on a set to please the audience because you don’t really know what they want. Just play with balls and really mean it.

What is the impact of music on the socio-cultural implications? how do you want it to affect people?

It has always been helping yourself and the people who listen to you to forget for as long as possible all the troubles that surround us all.

Let’s take a trip with a time machine: so, where would you really want to go for a whole day and why?

I’d love to go to Kansas City and see a young Lester Young play. Go to a bar where Joe Turner was bartending. See the Blue Devils. Go to New Orleans in the 50s to see Professor Longhair, Guitar Slim, Smiley Lewis, Dave Bartholemew. Now that you have me thinking about it, I guess I would have to use that machine quite a bit. Thank you for the opportunity to think about some of this stuff.