"Folk music is for the people, by the people. Therefore that struggle for racial equality is certainly going to find itself inside the confines of folk music. The same can be said about political and cultural issues." What do you learn about yourself from Americana/Folk music and culture? What does the blues mean to you?

I think the simple answer here is truth. My interest in both folk and blues has led me to appreciate music with an element of reflection of self and one's surroundings. Over the years I have invested a lot of my experiences into my music as kind of some sort of quest for knowledge. I used to refer to my music as a search for bare boned truth in song, but over the years have moved away a bit from that original mantra. Lyrically, these days I am more into including a lot of myself and others around me as I had in the past, but doing so in a way that protects myself and those close to me. At my present level, the 'heart on sleeve' method proved detrimental in a handful of ways and left me feeling as though I had given too much with so little in return.

This is the question that folks usually skirt. No one likes to put themselves in a corner…ha! I don't know that pinning myself to any genre does myself any credit at this point, as I dabble in folk, blues, rock, country, R&B, soul, jazz…you name it really. And I'm not a real fan of fusion, so when I write a tune, I usually stick to the script.  I'm certainly not trying to re-invent the wheel or anything. I like to think that what I do is a reflection on a time when music had a bit more grit, more soul. In an era in which pop music seems to reflect our collective 'idiocracy', I like being that guy who's focus is less in the future of music and more in the past. There is so much amazing music being made these days, but you have to find it. It doesn't usually find you via the radio, TV, magazines and other near relic forms of communication as it has in the past. That saddens me because, though Jimi Hendrix and Janis Joplin and the ilk of that era were certainly stars, they weren't stars on the level of someone like Katy Perry these days. Not even close. Yet, there contributions were so strong and aligned with a sort of spiritual awakening here in America that the music has held it's weight through the current of time. Jimi and Janis will still be relevant and revered in 100 years, but a great current band like My Morning Jacket, I have my doubts. "My interest in both folk and blues has led me to appreciate music with an element of reflection of self and one's surroundings. Over the years I have invested a lot of my experiences into my music as kind of some sort of quest for knowledge."

I'd love to kill the idea of image over substance. Image is important and has always been used to market an artist, but now days I feel I am being marketed to at a hyper level. Today's popular music is so insanely of the moment and chock full of clichés that it feels more like a commercial for some sort of fictional lifestyle than it does entertainment. It's cheapened by it's hype, but it also almost always lacks any real substance. I desire more than that and I know a lot of other do too. Unfortunately, at least here in America, it seems people are enjoying being spoon fed this bull shit. It's maddening how accepted this 'portrait of sex and money on steroids' kind of mentality has been perpetuated. You hear a tune from 1960 like "Money (That's What I Want) by Barrett Strong in which he sings "Your lovin' gives me such a thrill, but your love it won't pay my bills". That's a lyric that describes money in a sense that we can all relate to. Money as a means to an end ("pay my bills"). In today's popular music however money is presented as almost a god like entity. It's a status symbol more than that means to an end I touched on earlier. It's very said, because if popular music truly is a reflection of our culture, I am saddened by what it has become.

What has been the hardest obstacle for you to overcome as a person and as an artist and has this helped you become a better musician?

I wasn't born a patient person. I have had a bit of anxiety since as long as I can remember and it had some negative effects on me for years by not recognizing the anxiety and working towards a way to keep it at bay. Somewhere in my late 20's I feel I lost a lot of who I was as a person and I feared I may never get that piece of mind back. Through modern medicine, diet, exercise and just acknowledging my age, I have been able to begin to see the light a bit. I'm not quite there yet, but that person who I was, and nowadays admire, he's still in there somewhere and I feel closer to that version of myself each day.

Songwriting has also taught me so much about patience. That idea that IT will come when IT comes. You have to work hard and have the antennas up at all times so to speak, but you also have to have the patience to receive those really good lines or melodies. There are exceptions to every rule, but I think with lyrics and melodies in mind, the best writers are the best editors. I subscribe to the idea of songs being given to people, but it's also up to those same folks to craft and fashion that rough idea into something that sparkles and has shape. "I'd love to kill the idea of image over substance. Image is important and has always been used to market an artist, but now days I feel I am being marketed to at a hyper level."

What is the impact of Folk/Americana music and culture to the racial, political and socio-cultural implications?

Folk music is for the people, by the people. Therefore that struggle for racial equality is certainly going to find itself inside the confines of folk music. The same can be said about political and cultural issues. Many great folk songs over the years have been written about particular events. Those songs were almost like some sort of primitive news. That's one of the ways information was spread in those days pre mass media, songs. The social commentary heard in many folk songs of the past, that's still part of our culture, particularly in hip-hop culture.

In my personal opinion I think some of the strongest 'folk singers' out there making music right now are rappers. Kendrick Lamar, Pusha T, Vince Staples, Anderson Paak…these guys are making incredible music that is very much a reflection of their culture, their struggle. I've certainly been influenced by hip-hop a lot as of late. It finds it's way into my music in the most subtle of ways, but it's there.

What is the relationship between: Poetry and Lyrics? What touched (emotionally) you from the Roots music?

Not everyone is a poet, but anybody can write lyrics. Good lyrics are poetry. I think the vulnerability of roots music is what drew me in. The stories, the struggle, the pain, asking the BIG questions, etc. That seemingly we can look into one's soul through the simple combination of voice and lyrical content. 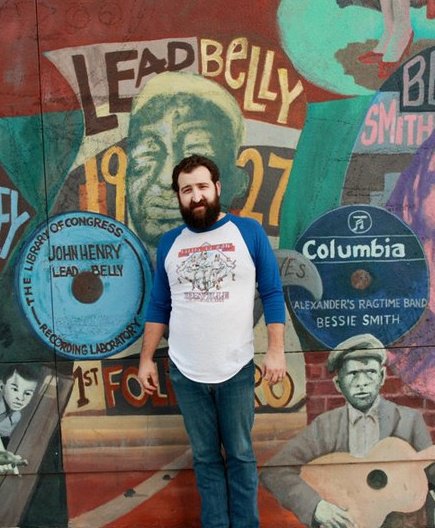 Probably the March on Washington (D.C.) in 1962. To be in that crowd of well over 200,000 people impassioned and empowered by the need for change. To witness the depth of a community's struggle and the power of their perseverance. To hear Martin Luther King's "I have a dream" speech. To hear Mahalia Jackson, Bob Dylan, Odetta, and more sing songs of protest and songs of hope. To witness America at the very crossroads of the idea of what it is to not be 'a man', but to be human. The whole scene must have been electric!

I wasn't born until 1981, so I'm no expert. But the March on Washington coupled with John F. Kennedy's assassination just three months later was truly the big-bang of what was to become 'the 60's'.