"Blues and jazz culture has had a massive influence on American culture, and definitely on global music. Its role in the rise of hip-hop culture, now ubiquitous and appropriated everywhere, can also not be understated."

Peach Reasoner: The Blues of Happiness

PEACH is an American Blues artist - singer and guitarist - born and raised in Anderson, Indiana. She grew up listening to the cool sounds of Ella Fitzgerald, Aretha Franklin, and Billie Holiday. At age 11, she started singing in her church choir and got her first electric guitar. PEACH (Peach Reasoner) began playing professionally at 16. She went off to University of Denver to study music. She ended up in San Francisco, where she bummed around playing with funk and jazz musicians like Smith Dobson, Russell Ferrante, Davis Ramney, and Jim Nichols. For a while, she toured Japan as a solo jazz musician, then returned to the States and played with Jim Messina for a time. PEACH has recorded with Taj Mahal (a duet - "Real Thing"), Keb' Mo' ("It Meant Nothing"), Garth Hudson (The Band) and Paul Berrere (Little Feet), among many others. These days, when PEACH isn't out on tour with her band, she calls Venice, California, home.                (Photo by Kovar) 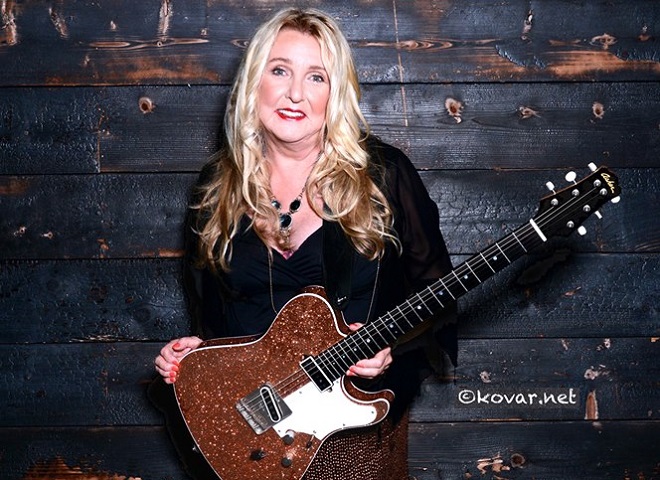 During February of 2016 American blues singer and guitarist Peach Reasoner returned to Copenhagen to play with her band at her favorite club, the cozy Café Bartof. Club owners Joacim "Jokke" Friss Holm and Charlotte Bertelsen had graciously agreed that recording equipment could be brought for a live recording session. Peach and The Almost Blues Band invited keyboard player and composer Ken Stange (Joe Cocker, Roger Miller, Jose Feliciano) to come over for the recording. Ken Stange had played with PEACH for many years in her Los Angeles band. Ken plays piano, organ and harp. The result of the live recording is called "A Night in Copenhagen". During that time of year, Denmark is cold and dark... but the love in that room was the reason for the journey. PEACH'S newest CD ‘A Night in Copenhagen’ (2016) is a live recording from their performances at Bartof Café in Frederiksberg, Denmark.

What do you learn about yourself from the Blues & Jazz music and culture?

I think through the blues and jazz culture I’ve been able to find and write music that expresses who I am. Sometimes cathartic, sometimes just joyful, but for me the blues is always an experience of “not being blue.” Through the blues I’ve been able to find a balance, a kind of happiness. I’ve learned that I can express myself and feel heard in this genre - but even more importantly, I think my learning experiences have been about seeing the soulfulness in other musicians and discovering things about human connection in general.

To me, the blues is a type of music and it’s a tradition of American music that I adore. I’m very dedicated to not only playing new blues music, but also continuing the tradition. I actually love playing lots of the covers. I think in some ways, for people that are not “into” the blues, that it’s a misunderstood genre. For blues musicians, by playing the blues, we are the happiest people in town. I love the raw authenticity of it and have felt that that tone matches that of my songwriting, more than any other genre.

How do you describe Peach/The Almost Blues Band sound & songbook?

With help from many people, I’ve been able to assemble a fantastic group of musicians over in Denmark that I feel lucky to play with. I feel our sound is more modern rockin’ blues, basically because we have two electric guitar players in the band - myself and Michael Engman Rønnow. We play some covers like “Sweet Home Chicago,” and we also mix in originals. I like to write or find songs that have a connection with my experiences in life. Those can be good or bad experiences, the important part is that they resonate with me emotionally.

"The blues is always an experience of 'not being blue'. Through the blues I’ve been able to find a balance, a kind of happiness."

Playing around the world has allowed me to live within other cultures (Japan and Denmark primarily). Because of all my travel, I have seen the struggles and heard the opinions of many people around the world. These experiences have had a broad range:  from South Korea under martial law in 1976 to current day chats with Uber drivers in Europe (and their stories of how they fled their war-torn countries).

Naturally meeting and recording with Taj Mahal and writing with Keb’ Mo’ are high points for me. But honestly, it’s the people behind the scenes: radio interviewers, zealous Facebook fans, booking agents around the world, and my publicist Doug Deutsch…those are my biggest influences. But most of all, my mother and my daughter have always been my biggest cheerleaders.

Once I was fed up and discouraged by the music business. I had a discussion with Marty Grebb (Buckinghams) about it. Marty said: “You’re a musician, you’re going to keep playing music.” And in an instant, I knew he was right.

Are there any memories from gigs, jams, open act and studio sessions which you’d like to share with us?

My daughter singing backup vocals in my band at a few shows recently made for such special and memorable gigs! 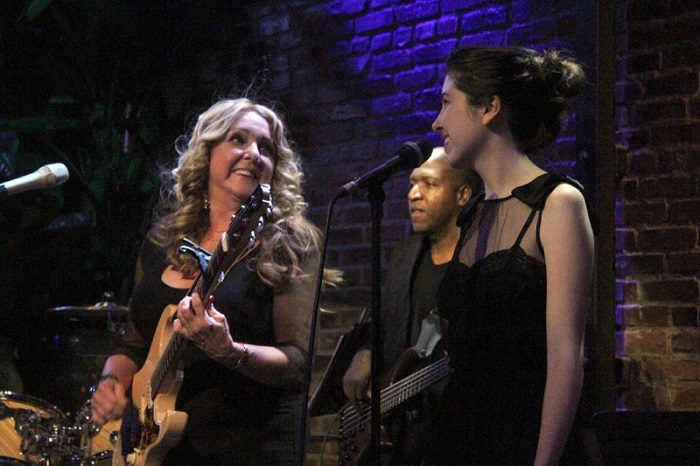 "If it’s a good song, do it. I like to write or find songs that have a connection with my experiences in life. Those can be good or bad experiences, the important part is that they resonate with me emotionally." (Photo: PEACH and her daughter, Gina Segall, singing together on stage 2013)

I miss the emphasis being on the lyrics and the lyrics having a beautiful melody, a melody that burns in your brain. I also appreciate the use of “real” instruments that was much more prevalent in music of the past - the contrast is particularly striking, I think, in popular music. And it does seem as though there was more of an audience for blues and jazz, especially in Los Angeles, so that is something to be missed. But there are many great artists working today, and I’m certainly happy to be a musician in 2016!

My plan, my hope, is to continue playing around the world. I’ve always been that girl…the one with the plan. As for fears…the potential political situation in the United States right now is certainly something to be fearful about. I hope that the younger generation is really coming out to vote in our upcoming election, as it is their future that is at stake. Music industry-wise, I hope that truly talented artists will be able to get their work out there, and that the popularity/beauty-contest-atmosphere that social media can create will not completely take over the industry.

What does to be a female artist in a “Man’s World” as James Brown says? 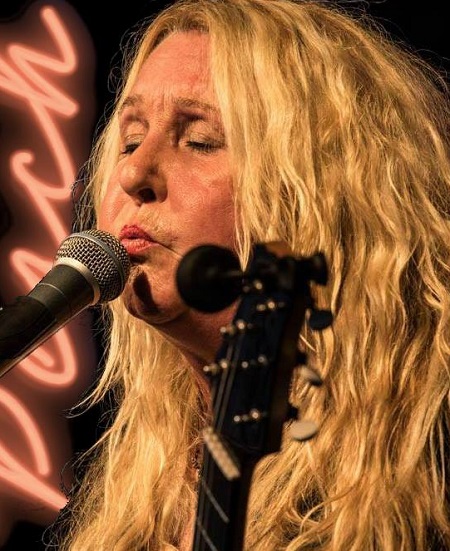 First of all, I’d like to say this is the hardest question I’ve ever been asked on any interview. Mostly because I have a lot to say on this topic and it is deeply emotional. Hopefully the environment for female musicians is changing with the current generation. But for my generation, the generation of the “chick singer,” the encouragement we received was often lacking and was often built on an idea on the women in the band being “window dressing.”

Another key difficulty of being a woman musician is that (and this is just my opinion) our times “at bat” are much more limited than that of our male counterparts. While it’s true, we are often wanted to be on the bill (for example one female-fronted band on each blues festival), so that exists, yes that’s true. But in terms of musicianship, day-to-day playing in ensembles with men, it’s a hard go to find that piece of real estate. This affects how well we play once we get to the stage. I could go on and on, but the bottom line is this: you have to ask yourself, why are there so few women on today’s stages?

My generation of women in music certainly took a backseat in every way in comparison to the men of my generation. I think the status of women has improved since I was a girl. But I think there’s a problem for women who are perhaps not the Beyoncé’s of the world. It’s almost like you have to be a Beyoncé or a Taylor Swift or nothing at all. Look at the touring bands at the festivals you attend - count the number of women you see on the stage. That should tell you “what is the status of women in music” today.

What is the impact of Blues & Jazz music and culture to the racial, political and socio-cultural implications?

Blues and jazz culture has had a massive influence on American culture, and definitely on global music. Its role in the rise of hip-hop culture, now ubiquitous and appropriated everywhere, can also not be understated.

I’d want to go to Copenhagen and play outdoors in the summer on one of the big stages with my beloved Danish band with Ken Stange (US musician). Because when we play, it’s like taking flight. 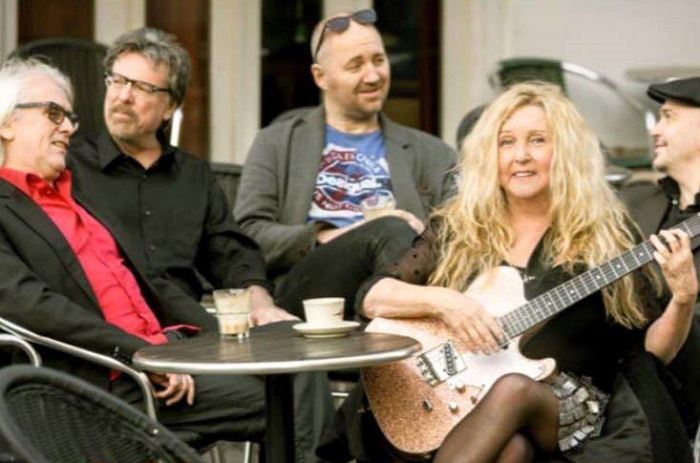