"I would hope that the blues would continue to be primarily a storytelling medium, but I fear that “the blues” will morph and “evolve” into more commercially-appealing “blues-rock” with little to no reference to the traditional musical structures and storytelling qualities, and that the importance of lyrics will degrade into simplistic and meaningless stock “blues” cliches that serve only as a mere backdrop to endless instrumental noodling and unemotional posturing."

Rick Lee is the best known Chinese-American guitarist anywhere in continental US. Actually, he's one of the best-known guitarists in Houston, Texas. Rick Lee cites blues guitarist and singer Otis Rush as a major influence and the reason he started playing the blues. Lee fell in love with the blues as a teenager. After hearing the Bluesbreakers' version of "All Your Love" on a classic rock-blues show, Lee was intrigued enough to investigate the original by Otis Rush. Just one listen was all it took for Lee to know that he was to be a bluesman forevermore. Lee was born in Houston, the son of Cantonese immigrants, and spent a good chunk of his childhood soaking up African-American culture at his parents' grocery store. Rick has been a solo practitioner since he graduated from the University of Houston Law Center in 1986. 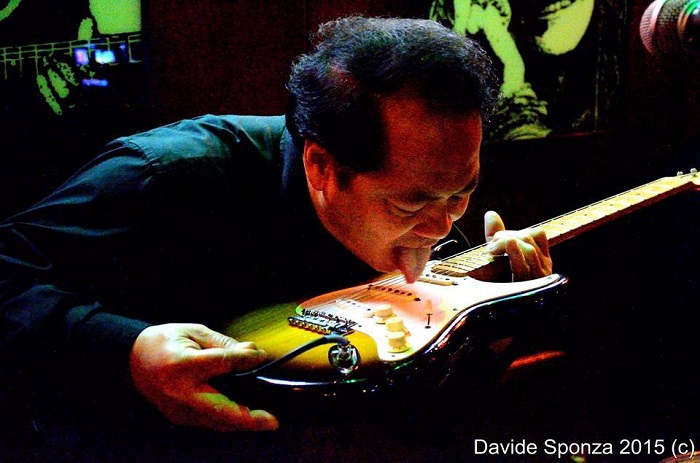 His legal practice focuses primarily upon transactional work, family law and immigration matters. Rick’s musical career began shortly after college, when Rick began to teach himself the guitar as a hobby and a means to meet fellow law students. Over the past years, Rick and his guitar "Lucy Lu" has become a fixture at Houston blues events. Lee's special hero is the late Guitar Slim, whose six-string readings of African-American gospel organs simultaneously electrified and sanctified the South in the mid- to late '50s. From reading about Slim, Lee learned not just his wildman antics, including walking on the tables, but also a whole philosophy of blues as a uniter of people from all races and walks of life. Rick Lee & The Night Owls has been playing and singing the blues around Houston ever since.

What do you learn about yourself from the Blues people and culture?  What does the blues mean to you?

I’ve found that actual blues fans and audiences REALLY listen and don’t treat the blues as “background music”. I have accepted that the blues is a “niche” musical genre and likely will always have a limited audience, for whom the music is NOT some kind of disposable “pop” music. I can’t speak for all musicians, but for me, the blues is the strongest musical genre for expressing one’s self—and I think that blues people seek out that genuine expression of the artist’s self. And I guess that I’ve learned that I am able to perform with enough honesty and soulfulness to gain appreciation from blues listeners.

I’ve always considered “the blues” to be an African-American musical genre that came from the struggles of black Americans in the early-to-mid Twentieth Century to find a place in American society. I think that a failure to recognize this cultural aspect of the blues diminishes a performer’s ability to sing and play the blues with the emotional depth that the music deserves. Does this mean that “the blues” has to be restricted to a strict 12-bar, I-IV-V format, or that “white people can’t play the blues?” OF COURSE NOT—but I believe that the farther one gets away from the cultural aspects and the established formats of the blues roots, then it becomes something else—more akin to rock, or soul, or rhythm ‘n’ blues—than “the blues”, despite what some fans contend is an inevitable, necessary “evolution” of the genre.

What were the reasons that you started the Blues researches?  How do you describe your songbook and sound? After I had learned the basics of playing guitar and learning how to play chords, I wanted to learn how to play single-note riffs and solos. I read in my guitar instruction books that something called the “blues scale” was the foundation of blues and rock guitar solos, so I taught myself how to finger the notes in the blues scale. However, I couldn’t make the random notes sound musical, so I decided that I’d listen to some blues music to try to make sense of the scale.  And in listening to some blues—particularly, the song “All You Love” by Otis Rush—I found myself so emotionally moved by the music that I decided that a style of music that could affect me so much should be the type of music that I should learn and want to play.

My performance repertoire includes many blues standards by the usual great artists, such as B.B., Freddie, and Albert King, Muddy Waters and Howlin Wolf, Otis Rush, Buddy Guy, Eddie “Guitar Slim” Jones, T-Bone Walker, Slim Harpo, Willie Dixon, Bobby “Blue” Bland, and many others, along with my original compositions, such as “If the Blues is Playing What You’re Feeling (Even a Chinese Man Can Play the Blues)”, “Peeping Through the Keyhole”, “I’m Gonna Get Over You”, “Last Night I Had a Dream”, and other originals. I would describe my sound as electric guitar-driven blues that is primarily traditional—that is, with a significant emphasis on the vocals, lyrics, and the storytelling—but with inflections of the classic rock music that I listened to, and that I still listen to, for most of my life, though the blues is my preference for performing.

Which acquaintances have been the most important experiences?  What was the best advice anyone ever gave you?

I’d have to say that the most important acquaintances in hindsight were non-musical. Before I ever picked up a guitar, I lived in a predominantly African-American neighborhood in the Fifth Ward in Houston, Texas, where my parents owned a grocery store, for most of my childhood, and I would hear the talking—the sounds of those voices of our neighbors. And as I grew older and left the Fifth Ward, I still remembered how distinctive those voices from my childhood were. I also learned about the black culture and sense of community, about the sense that black people were very often not treated the same as the rest of society, often looked down upon.

As an Asian-American minority myself, I could identify with my neighbors—which I now think helped me to connect with and feel more meaningfully the black roots of blues music. The best advice that anyone ever gave me, from my parents on, was to forget about playing music except as a hobby and to just focus on my legal career—which advice I sadly ignored. . . 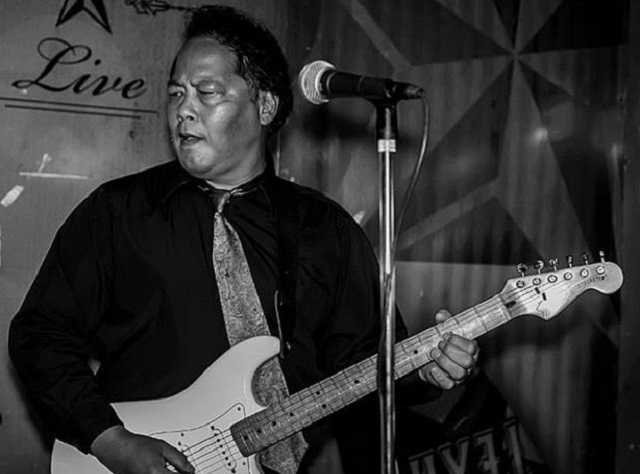 "I can’t speak for all musicians, but for me, the blues is the strongest musical genre for expressing one’s self—and I think that blues people seek out that genuine expression of the artist’s self. And I guess that I’ve learned that I am able to perform with enough honesty and soulfulness to gain appreciation from blues listeners." (Rick Lee / Photo by Richard Griesser)

During the 1990’s in Houston, there were a number of jams, at which musicians were welcome to sit in and perform, in black neighborhoods in the Third Ward, hosted by such fine African-American performers as Joe “Guitar” Hughes, I.J. Gosey, Eugene Mooney, and Bobby Lewis. It was always gratifying for me to perform the blues before mostly-black audiences and gain their approval and applause, which provided me a needed sense of self-validation, confidence, and acceptance.

What do you miss most nowadays from the blues of the past?  What are your hopes and fears for the future of?

I miss the traditional aspects of the blues, particularly the storytelling tradition of the genre. It seems that more emphasis is now placed on instrumental prowess—the faster and flashier the playing, the better—though I disagree. I would hope that the blues would continue to be primarily a storytelling medium, but I fear that “the blues” will morph and “evolve” into more commercially-appealing “blues-rock” with little to no reference to the traditional musical structures and storytelling qualities, and that the importance of lyrics will degrade into simplistic and meaningless stock “blues” cliches that serve only as a mere backdrop to endless instrumental noodling and unemotional posturing. 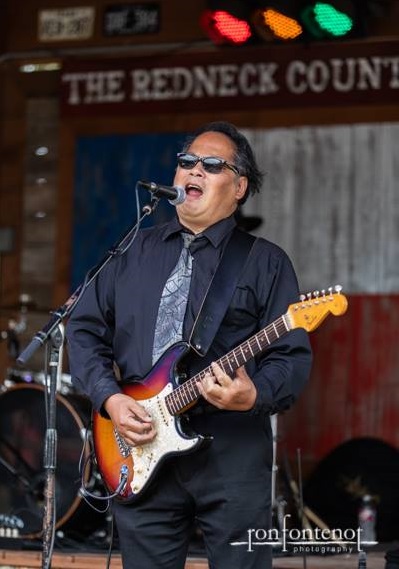 I wish that all music could be less programmed and formatted and formulated to the lowest common commercial denominator of what appeals to the masses, and returned to an emphasis on talent (rather than image) and artistic expression not dependent upon commercial factors. I think that there still are many excellent performers in all genres, particularly independent and non-“major label”, who are driven more by artistic integrity and vision than by mass consumption commercial considerations.

"The best advice that anyone ever gave me, from my parents on, was to forget about playing music except as a hobby and to just focus on my legal career—which advice I sadly ignored..." (Photo by Ron Fontenot)

What characterizes Texas Blues in comparison to other local scenes?  What touched (emotionally) you?

I consider “Texas Blues” to be more earthy, rawer, and often more traditionally-based than other regional blues styles, while still retaining a progressive approach in terms of stylistic innovations—as exemplified by the influential impact of such Texan blues artists as T-Bone Walker, Lightnin Hopkins, Albert Collins, Billy Gibbons, and the Vaughan brothers, among others. I grew up listening to classic rock music and did not pick up the guitar until after finishing college. By the time that I had become proficient with the instrument, I was a bit older in age and found that I more readily identified with the often more mature, more emotionally-gripping, and more personal—more humanistic--themes of blues storytelling and that the blues was the style of music through which I could express myself and my feelings most fully and honestly.

The blues is undeniably a product of the African-American society and culture. Because of that connection to the black community, I’ve always considered the blues to have a somewhat liberal leaning, compared to the clearly more conservative bent of most country music (with rock music more in the middle than the other two genres), although such characterizations are an oversimplification. The blues have certainly impacted the development of jazz, rock music, and rap—and is, of course, perhaps the quintessential African-American contribution to the world’s art and culture.

If just for one day, I would have liked to have attended one of the numerous blues festivals in either the United States or in Europe during the 1960’s—even more so if I could have played, too! 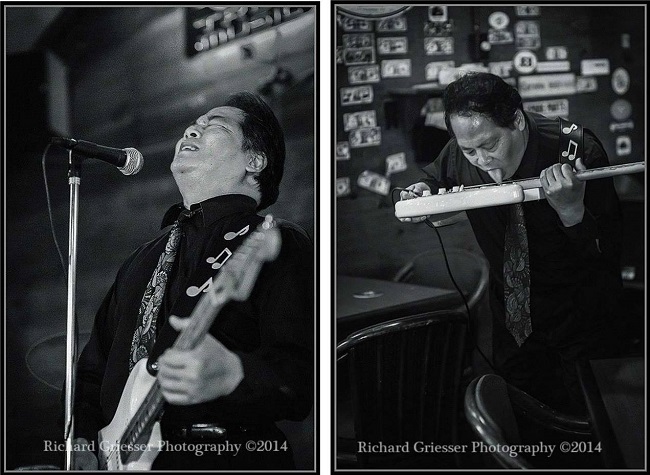