The "Queen of Rock N' Roll" Suzi Quatro talks about her new album The Devil In Me, poetry, and Rock culture

"I want my music and lyrics to be heard, and most important to be understood. When I write, I go way down deep and talk about what I know. When somebody says to me that heard a certain song and it touched them, I am happy and the artiste in me is satisfied."

The "Queen of Rock N' Roll" Suzi Quatro released her new single and video for the song "The Devil In Me" - first single was "I Sold My Soul Today". The song is taken from her forthcoming studio album "The Devil In Me''. The cover of the single was created by the famous brazilian Neo-Pop artist Romero Britto. The new studio album "The Devil In Me" will be released on March 26th, 2021 It’s got to be a very special release that has Suzi Quatro announce proudly: “The Devil In Me is the best album in my career to date!” After all, the American rock vocalist would hardly utter such superlatives lightly. Suzi’s enthusiasm for her latest offering has many reasons, twelve of them to be precise. Because The Devil In Me consists of exactly a dozen songs, each of them – from the opening track and title song to the final ‘Motor City Riders’ – a real highlight. The reasons for Suzi’s remarkable creative explosion: on the one hand the lockdown, which kept her from her usual touring life in spring 2020, and on the other another collaboration with her son Richard Tuckey, which had already worked out extremely well on her predecessor album No Control. 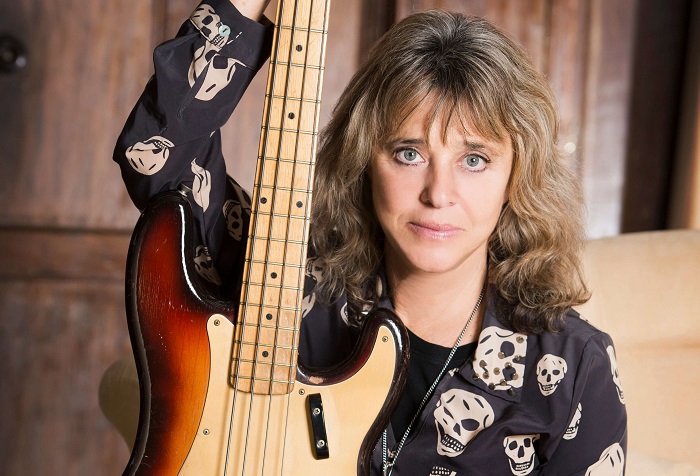 Suzi: “Starting spring 2020, almost one hundred of my shows were cancelled and Richard would also have been on tour with his band had not all concerts been cancelled or postponed. So I said to him: ‘We should make the most of our free time, write new material and allow ourselves to be inspired by the things that are currently going on in the world.’ I already knew that Richard and I make a brilliant team, after all No Control had been a major success and a very special recording for us. Although I would never have thought that we’d be able to surpass it. But everybody who’s heard The Devil In Me and all the people who had worked on the previous album have told us: ‘This album is even stronger!’” The album presents Suzi’s full range of musical diversity plus a number of surprises. From rock tracks such as ‘The Devil In Me’, ‘Get Outta Jail’, ‘Motorcity Riders’ and ‘Hey Queenie’ to fairly unusual numbers such as the pub atmosphere-inspired ‘Loves Gone Bad’ with its intimate mood or ‘In The Dark’ which is accompanied by elegant piano and provocative saxophone sounds, Suzi presents herself from a whole range of different aspects. “Richard wanted this album to have a through line, so that you could put any track on, and it just  fit… he also said he wanted this album to be as important and groundbreaking as my first one. So that is how we approached this project, and that is what we accomplished.”

Well, it has given me a very wide and open view of everything. You can't be stuck in a single-minded state of mind when you have travelled the world since 1964. Just not possible. I am very accepting of all cultures, all religions, all politics, all people really. I feel a part of the universe and am always able to listen and understand different viewpoints. I like to argue the toss and often do, most of the time with 'not' like-minded people.

Where does "The Devil In Me" creative drive come from? What characterize album's music philosophy?

Sometimes you just write with no exact intention and let the songs weave their way through. After my son Richard and I got our feet wet with our first album, No Control, with not blueprint, having never worked as a team before, this one was easier because we knew 'how' we worked, but more difficult because we had a very high benchmark as No Control had been a huge critical success worldwide. My son had a clear vision for this album and wanted it to be a ground breaking as my very first album Suzi Quatro in 1973, and we achieved that. We went on every single song, for a vibe, if a song did not have this vibe, it wasn't on the album. Creation was floating all around the atmosphere, and I tapped into it lyric wise, and am still tapping into it now. We managed to not only 'better' NO Control, but to make a diverse album that is me all the way through and also one that fit together like a jigsaw puzzle. There is not one track on here that sound's wrong and there are no fillers. And although it was written and recorded during lockdown, and has its darker moments, it is a very very positive piece of work. 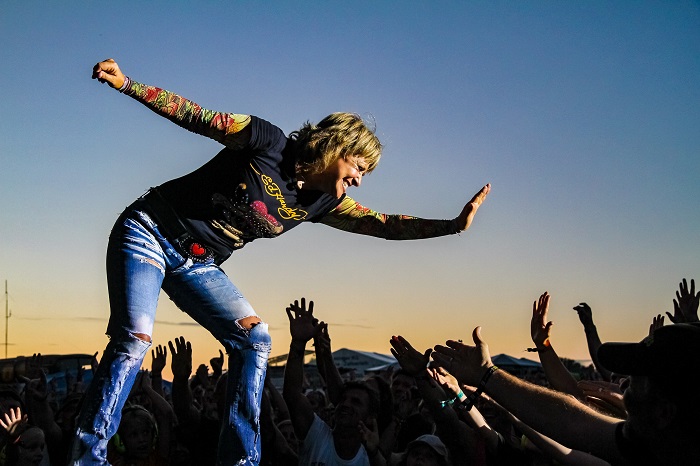 "I have been writing poetry since a young girl. I have always had a love of the written word and always had a plan to release a book like this having done poetry my entire life. I am very proud of this book, mainly because it touches a lot of people. What can be better. I wrote and released another illustrated coffee table book during lockdown called, Through My Words, which is a lyric book, and am working on the 3rd of the series now." (Suzi Quatro / Photo © by Paul Bossenmaier)

What was the hardest part of writing autobiographic "Unzipped"? What do you think is key to a life well lived?

I guess the hardest part for anyone writing their life story, is going back into the sad parts.  Things like my divorce from my first husband, my mother's death. You have to live it again to write about it, so you have to hurt all over again. I am a very honest open person so I didn't pull any punches, as I didn't pull any punches in my documentary released end of 2019, SUZI Q. I don't know how to soft step, and always walk with confidence and conviction.

The key to a life well lived, that is a big big question and, in all honesty, you need a book to write the answer properly, but trying, for the sake of this question to simplify it, keeping true to yourself, without compromise, follow your instincts, follow your heart, try not to hurt anyone, and, try not to hurt yourself. If you are not happy with your life, change it. We are all born with a map to follow, and even if we go off the road sometimes, we should always know the way back home. And home is in your heart.

I have been a gigging artist for 57 years to have had over a year off now is just so difficult. It’s what I do, it’s what I know, it’s what makes me happy and I pray the touring comes back again, I pray with every fibre of my being. Talking music of the past, I guess I miss the innocence of the music from my teenage years, simple songs, simple messages, lighting up hope and, dreams in my artistic soul. You, can never get 'those' years and memories back again... except when you play the songs. and then you can fly through the past... and I do.

Re the future. I hope the world can finally be clear of the dreadful covid and get back to normal living. We are a species that needs to touch, to feel, to be close, to communicate one to one, this has been denied since March 2020, it is not natural it is not normal, and never will be. I am famously outspoken about being a non-gender person. I have never called myself a female musician, just a musician - been that way since I began in rock and roll since 1964. And because I am that way, and that's the vibe I put out, I don't have any problems with anyone. I get respect and always have. And again, although I don't do gender. For the sake of the article, I will have to do gender.  Since I broke down the door for women playing instruments and fronting a band and became the first one to have worldwide success, the world has seen other female musicians coming through.it is not unusual for a female to be in a male band, although it must be said.. there are still not that many. I cannot answer about the status of women today only to say that I am not happy with the way the marketing has gone, very 'soft porn' videos living them nowhere else to go. But saying that, there is a lot of talent around. Do women have it easier now, I really don't know. I am not of that mindset.

How started the thought of Through My Eyes? What touched you and what do you love most about the Poetry?

I have been writing poetry since a young girl. I have always had a love of the written word and always had a plan to release a book like this having done poetry my entire life. I am very proud of this book, mainly because it touches a lot of people. What can be better. I wrote and released another illustrated coffee table book during lockdown called, Through My Words, which is a lyric book, and am working on the 3rd of the series now.

How to avoid temptations, how to take care of yourself on the road so you always give your best, and, how to be successful and stay 'normal'.

I want my music and lyrics to be heard, and most important to be understood. When I write, I go way down deep and talk about what I know. When somebody says to me that heard a certain song and it touched them, I am happy and the artiste in me is satisfied. 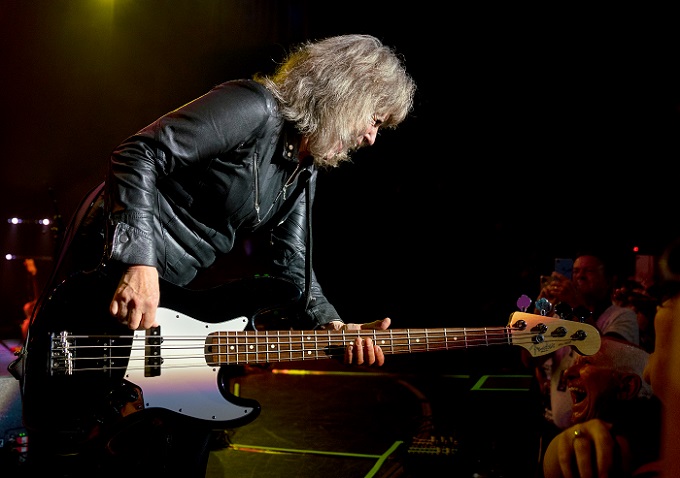