One hundred years ago, a boy-child was born in Mississippi – a dirt-poor, African-American who would grow up, learn to sing and play the blues, and eventually achieve worldwide renown. In the decades after his death, he has become known as the King of the Delta Blues Singers, his music expanding in influence to the point that rock stars of the greatest magnitude – the Rolling Stones, Bob Dylan, Eric Clapton, the Allman Brothers – all sing his praise and have recorded his songs.

That boy-child was Robert Johnson, an itinerant blues singer and guitarist who lived from 1911 to 1938. He recorded 29 songs between 1936 and ‘37 for the American Record Corporation, which released eleven 78rpm records on their Vocalion label during Johnson¹s lifetime, and one after his death. 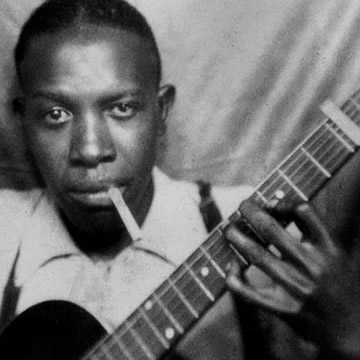 Most of these tunes have attained canonical status, and are now considered enduring anthems of the genre: “Cross Road Blues,” “Love In Vain,” “Hellhound On My Trail,” “I Believe I¹ll Dust My Broom,” “Walking Blues,” “Sweet Home Chicago.”

Like many bluesmen of his day, Johnson plied his craft on street corners and in jook joints, ever rambling and ever lonely – and writing songs that romanticized that existence. But Johnson accomplished this with such an unprecedented intensity, marrying his starkly expressive vocals with a guitar mastery, that his music has endured long after the heyday of country blues and his own short life.

Never had the hardships of the world been transformed into such a poetic height; never had the blues plumbed such an emotional depth. Johnson took the intense loneliness, terrors and tortuous lifestyle that came with being an African-American in the South during the Great Depression, and transformed that specific and very personal experience into music of universal relevance and global reach. “You want to know how good the blues can get?” Keith Richards once asked, answering his own question: “Well, this is it.” Eric Clapton put it more plainly: “I have never found anything more deeply soulful than Robert Johnson.”

The power of Johnson’s music has been amplified over the years by the fact that so little about him is known and what little biographical information we now have only revealed itself at an almost glacial pace. Myths surrounding his life took over: that he was a country boy turned ladies’ man; that he only achieved his uncanny musical mastery after selling his soul to the devil. Even the tragedy of his death seemed to grow to mythic proportion: being poisoned by a jealous boyfriend then taking three days to expire, even as the legendary talent scout John Hammond was searching him out to perform at Carnegie Hall in New York City.

MISSION STATEMENT::
The Robert Johnson Blues Foundation is dedicated to preserving the music and memory of Robert Johnson through the provision of art education, competitions and scholarships. VISION STATEMENT::
The Robert Johnson Blues Foundation is making the community a better place to live by increasing the economic status of the residents of Copiah County, Mississippi through the arts.

GUIDING PRINCIPLES::
The Robert Johnson Blues Foundation will fulfill our mission and achieve our vision by working to:


SUPPORT::
Please realize that funding is derived from generous private and corporate donations, foundation grants, and annual dues. We ask for your help and support in joining our cause as a sponsor, or a Robert Johnson Foundation member. If you are interested in making a donation or becoming a sponsor, please review the Robert Johnson Blues Foundation Donation page, or please Contact Us for more information.

WHO WE ARE::
Please visit our Personnel section for more information about the Robert Johnson Blues Foundation. You can Contact Us for all inquiries related to Robert Johnson's legacy and the Foundation's work.