To have watched Mr. Edwards play was to have witnessed living history. He was born in Shaw, Miss., where his father was a guitarist and violinist in country jukes throughout Mississippi. 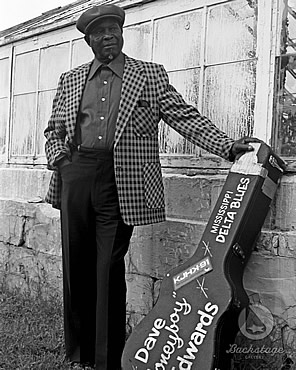 His father bought Mr. Edwards a Sears guitar for $4 from a plantation worker. At the age of 14, Mr. Edwards left home to travel with bluesman Big Joe Williams.

He settled in Chicago in 1953 after recording “Drop Down Mama” for the influential Chicago label Chess Records.

Edwards often would recall how he was in the house when the iconic bluesman Robert Johnson took his last drink of poisoned whiskey.

“He talked about it a lot,” said Michael Frank, Mr. Edwards’ longtime musical collaborator and manager. “But when he told it he always told it as if it were fresh. He was such a good storyteller, you wouldn’t know that if you heard it the first time.”

Mr. Edwards was slated to perform at the free noontime concert Monday at Millennium Park. He last performed April 17 at the Juke Joint Festival and Cathead Mini-Festival in Clarksdale, Miss.