"It seems that Blues and Rock music is most listened to by people a little older these days. I don't get involved in music that is politically motivated. Music is for all people to bring us together."

"Bring It On Home" (2018, Grooveyard Records) is the debut studio disc by hard-working band Head Honchos from Valparaiso featuring the dual twin-guitar attack of father and son, Rocco Calipari Sr. and Rocco Calipari, Jr. They're on a mission to rock the blues, family-style. Rocco Calipari Sr. is a skilled teacher of guitar, who, since 1995, has also played lead guitar for renowned Chicago-based blues group, Howard and The White Boys. Famed blues guitar great and Legends club owner Buddy Guy - who lent his skills to H&TWB's album, on The Big Score - has been a longtime mentor the group. During his long career, Calipari Sr. - one of Chicago's great contemporary blues guitarists - has played with Bo Diddley, Chuck Berry, Carl Weathersby, Son Seals, and many more, in some forty states and twelve countries around the world. 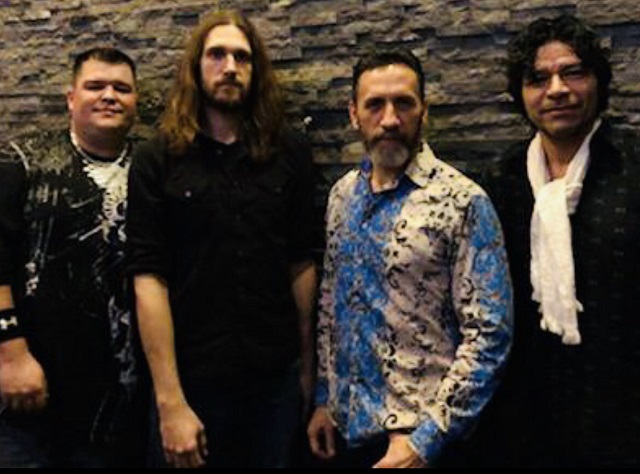 Rocco Jr. first sat in with Howard and the White Boys when he was fifteen years old. He attended the Guitar Institute in Los Angeles where he studied with Carl Verheyen (of SuperTramp renown), jazz/blues great Scott Henderson, and famed blues instructor/writer, Keith Wyatt. His approach to the guitar, while grounded in rock and blues, is keenly aimed at a post-modern interpretation of American roots music. In a time when American music is too often characterized by emasculated melodies, narcissistic lyrics, and hyped mediocrity - the "Head Honchos" offer up intense body moving rhythms and emotionally charged guitar expressions. Grounded on the foundations of American blues, rock, soul, and funk the "Head Honchos" launch their improvisational excursions with an irresistible invitation to kick back, let go, and enthusiastically ENJOY!!!

Rocco, when was your first desire to become involved in the blues?

In the late 70's I was watching the show Soundstage on television the rock band Journey was on and they had Albert King, Luther Allison and Jerry Portnoy (harp) as guest and they stole the show.

What were the first songs you learned & what was the first gig you ever went to? I remember going to Europe for the first time. The reception and hospitality were like no other. They have a true appreciation for music and treat musicians with so much respect. That’s not to take away from anywhere else, the people that love this style of music are very supportive all over.

What do you learn about yourself jammin' the blues with Calipari Jr.? What touched (emotionally) you?

One thing I learned is you can never stop learning and the music will never stop evolving. Rocco Jr studied at G.I.T in California and studied with some great guitarist. When he came back, he had developed a style all of his own. We started Head Honchos together in my basement with Me, Him and a drum machine. It has come a long way, it's very special to both of us.

What characterize BRING IT ON HOME songbook/sound? Are there any memories from studio which you’d like to share?

We wanted the CD to be high energy from start to finish, something you could put on at a party that feels like a good time. We recorded at a studio that was built in a loft above a barn in Valparaiso Indiana. It was a great sounding wide open room with a really good atmosphere. We had a great time recording there along with our engineer Mike Reagan.

I miss buying albums looking at the pictures and artwork, reading the liner notes and lyrics. I hope that more young people will listen to and appreciate the music of old and its history. I don't really have any fears good music will last forever.

What has made you laugh from Bo Diddley and Son Seals? What was the best advice anyone ever gave you?

Actually, Buddy Guy is the best storyteller. I was fortunate to have recorded with him once and he told us stories about Muddy Waters, John Lee Hooker and Jr wells...he had us laughing out loud. Best advice I ever got was from my Father, he said always do your very best and never give up.

What are some of the most important lessons you have learned from your paths in the music circuits?

I have seen drugs and alcohol ruin a lot of people. You have to run a band like a business and don't get caught up in those types of things. You meet many people along the way keep the good and lose the bad. 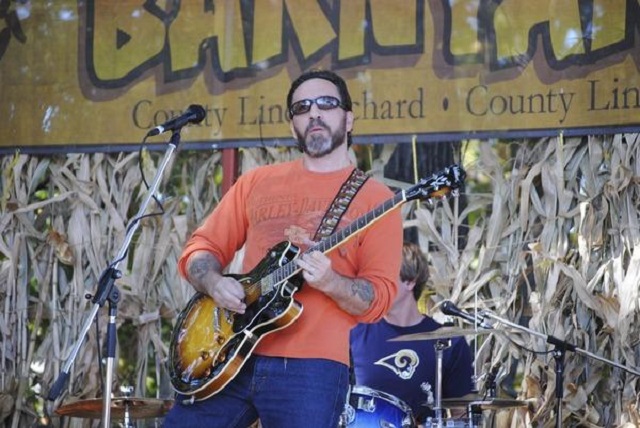 "All of the music I love starts with the Blues, it has given me a good living and taken me to places I would not have seen otherwise. I play the Blues because it always makes me feel good it's very emotional music." (Photo: Rocco Calipari Sr. on stage)

What is the impact of Blues and Rock music to the racial, political, and socio-cultural implications?

It seems that Blues and Rock music is most listened to by people a little older these days. I don't get involved in music that is politically motivated. Music is for all people to bring us together.

So many things I would like to do but it would be nice to be in Maui with my wife enjoying peace and quite with no cell phones and television.

I recorded with Buddy Guy on Howard & The White Boys The Big Score. Howard McCullum, Jim Christopulos & Carl Weathersby are some of the best.

Best...Long Beach Blues fest playing with Chuck Berry & Bo Diddley. Worst...Broke my knee and fell off stage when I was 19.

What does the BLUES & what does offered you? Why do you play the blues?

All of the music I love starts with the Blues, it has given me a good living and taken me to places I would not have seen otherwise. I play the Blues because it always makes me feel good it's very emotional music.

It's very good. People tell me I look like I'm having alot of fun while playing and I think it rubs off. 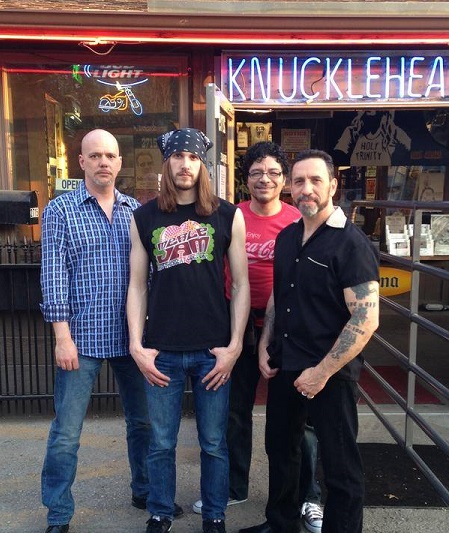 "You can hear the influences in some of the playing but all of the recording equipment today takes away the rawness of what they had."

There are many but we once opened for B.B KING one of the greatest men you will ever meet. At that time I was Playing a Fender Strat and I asked him to sign my headstock he said he could not because it was not a Gibson but later he did and told me not to tell anyone.

There are alot of ups & downs in life they all play a role.

I don't know about mistakes but I do miss the days of buying albumns with pictures and art work to look at while you listen. I wish the Blues and Rock-n-Roll were back in the mainstream.

I love the feeling of walking on stage it never gets old, even if I've had no sleep the music pumps me up.

Our tours with Buddy Guy.

Probably just my Love for the music and that this is all I will do for the rest of my life.

When I moved from Detroit to Indiana I met and played with Carl Weathersby he taught me alot. "I miss buying albums looking at the pictures and artwork, reading the liner notes and lyrics. I hope that more young people will listen to and appreciate the music of old and its history. I don't really have any fears good music will last forever." (Photo: twin-guitar attack of father and son, Rocco Calipari Sr. and Rocco Calipari, Jr.)

Tell me about the beginning of the Head Honchos. How did you get together and where did it start?

When my son started to play guitar I put the band together to help him get experience. Then he went to school at G.I.T in California and studied with some great players when he came back we reformed with drum instructor Scott Schultz - later Roger Femali and replaced bassist C.C. Copeland with Roberto Agosto.

How did you choose the name “Head Honchos”?

When I was growing up my grandfather used to call himself the Head Honcho of the house.

LISTEN!! Do research to find out what influenced the people you like.

What advice would you give Rocco Calipari Jr.?

Listen carefully, do your best and have fun.

Yes, there are always some out there. 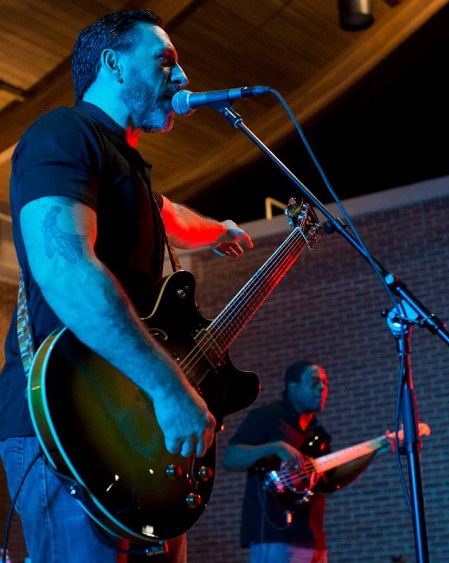 Depending on the mood I'm in: 50's Rock-n- Roll, Motown or some heavier stuff like Deep Purple, early Van Halen.

Everything. It has been a Huge part of my life I play everday.

In which song can someone hear the best of your guitar work? Three words to describe your sound & your progress..

It's hard to pick a song but I've always liked the solo on the song Judge (The Big Score... HWB). Three words..., BIG, BLUESY & FORWARD.

Is there any similarity between the blues rock today and the blues of the fifties and sixties?

You can hear the influences in some of the playing but all of the recording equipment today takes away the rawness of what they had.

My wife Jackie turns me on.