Roman-Italian singer Linda Valori talks about her experience with Popes, the art of Blues and Windy City

"Like Botticelli, Benjamin Franklin, Leonardo da Vinci and many others, Etta and Koko, Freddy King, Robert Johnson and many others are a cultural heritage we need to preserve and keep alive!"

Linda Valori was born in San Benedetto del Tronto on 3rd September 1978, is an Italian singer of Romanian origin. Launched by Simona Ventura and Tony Renis, in 2004 Linda was placed third at San Remo Festival. In 2005 she participated in the ‘Music Farm’ reality show and then released her first album ‘‘La Forma delle nuvole’’. In 2002 she won the ‘‘Mia Martini Giovani per l’Europa’’ prize. In March 2004 Linda was placed third in the general ranking of the 54th San Remo Festival.

After her San Remo success Linda participated in many important events. On 1st April 2004 she performed for Pope John Paul II before 20.000 people who had gathered in Piazza San Pietro in Rome for the World Youth Day. After numerous concerts around Italy, from 24th to 30th September she toured the USA, where she gave very prestigious concerts. On the occasion of the Eucharistic Congress, Linda sang for Pope Benedict XVI. She sang Walt Disney’s “Chicken Little” soundtrack and she stood in for Patti LaBelle in the Italian version of the song ‘Stir it up’. In autumn 2010 Linda presented her single ‘’Quelli che’’, a track that anticipated the Nar International Record Label release of her second album ‘’Tutti quelli’’ in December of the same year. In 2011 United Colors Of Benetton invited Linda to interpret a song by Nina Simone (Ain’t got no I’ve got life) which became their autumn/winter clothing commercial soundtrack in that same year.

Linda Valori’s new album, “Days Like This”, released on the Italian record label LeArt’ Sri, serves notice to North American blues and roots-music fans that one of Europe’s best singers has gone global in outreach. Recorded in Chicago and produced by Grammy-nominated bluesman Larry Skoller. Linda Valori is known and honored in Europe; she is now ready to win the respect of an American audience.

When was your first desire to become involved in the blues and Jazz music?

Now I feel the need to better understand it...but actually I’ve had this feeling since I was a child. I cannot give a rational explanation to this. I was (and still am) a child who listened because she “heard”. Everything was spontaneous. 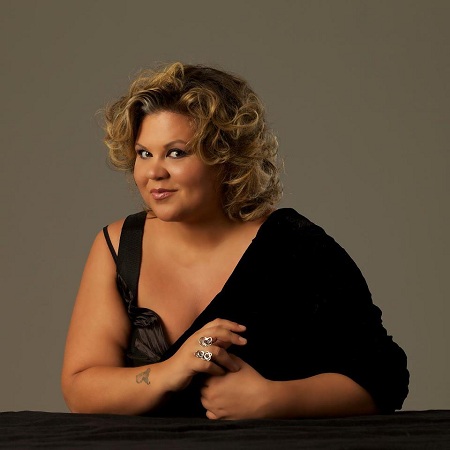 I think blues has no mask, and for this reason it may appear easy....but it's the opposite, it's a sort of scale: it gives you back what you give to it.

How do you describe Linda Valori sound and progress, what characterize your music philosophy?

It’s not easy for me to describe myself. For sure, I don't distinguish music by genre and I don't like to categorize. I listen to everything because our mood changes every day so we choose the song that better represents us. I do it in this way. Van Gogh never described his way of painting: he just did it. I sing and I consider music as a house with so many rooms, but it's always the same house.

You can learn blues only live, I don't know whether I have secrets or not. Everyone has its own “recipe” made of technique, experience, past and character.

What's been their experience from Chicago Blues clubs and special from Rosa’s?

The Rosa's has been the first club to host me, with Tony's kindness and passion (and mum Rosa's as well) and I’m really thankful for all this and hope to give back in emotion all that I feel. I had also the chance of participating to jam sessions in other clubs or as listener (I love listening to music...in the same way I love singing). Lots of artists bring themselves on the stage with their talent and past experiences...I’m very curious of discovering and listening to...curiosity is the quality that one should always have. 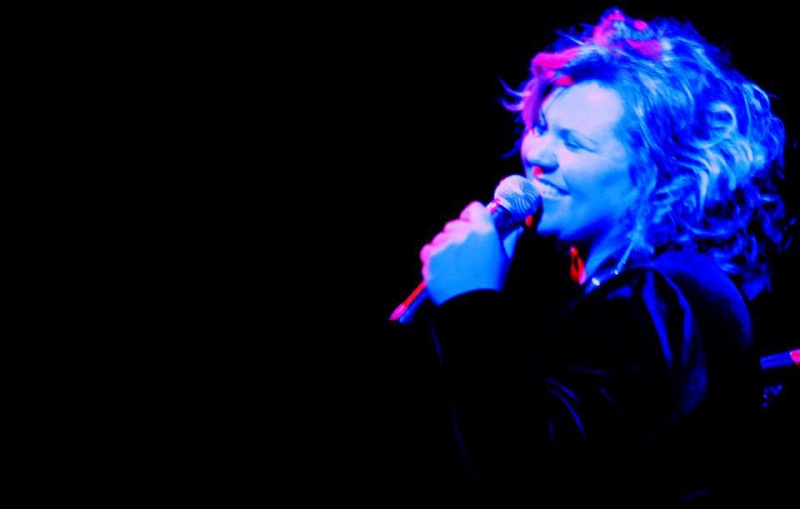 "I think blues has no mask, and for this reason it may appear easy...but it's the opposite, it's a sort of scale: it gives you back what you give to it."

All memories deserve to be shared. Everytime I walk in the studio, I try to take it easy so to relax. There are lots of artists that give their best after a little warming up, others that give it immediately, there are no rules and this is the fun: when you least expect it, come out wonderful things that you didn't plan. It’s fantastic when this happens and evens more when you listen back to the things you have done and love them more. Or the opposite...and you say: “it's that me? How gross!!” ah ah ah.

Which memory from your stays in Windy City makes you smile?

I’ve waited for 5-6 minutes in front of a broken traffic light trying to cross the street; I’ve broken 3 umbrellas...(who knows why!?!?); generally in English to say the address, you say the number first and then the name of the street while in Italy is the opposite: once a boy thought that “55” was not the number of the street where i lived but the “price” of my “service”...but you can solve everything with a laugh; I’ve met lots of people, good and bad, but always interesting.

It’s difficult to make a classification, and I think it wouldn't be right. However, last summer in Aosta (a small northern Italian region bounded by Switzerland) I really enjoyed it! I remember that it was 3 or 4 am and we were in a very nice coffee house....well, we started having lunch, then rehearsal and concert and then we ended up gathering in this coffee house for breakfast. We started with wine...then chamomile tea...and cappuccino in the morning! A wonderful no-stop. 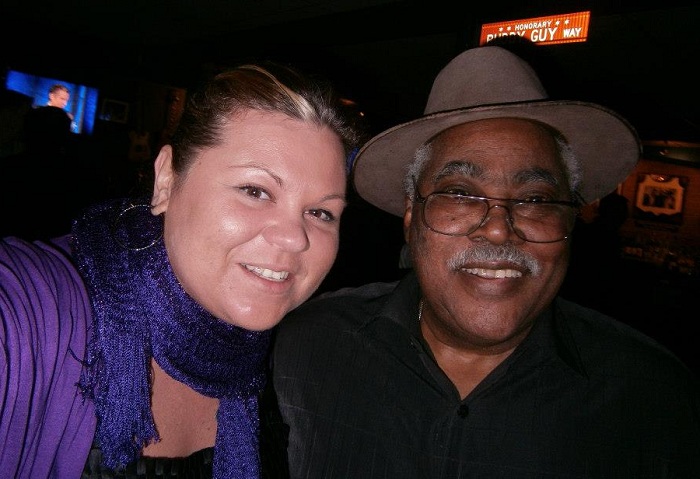 "Blues is like a parent you always have to respect."   Photo: Linda and Jimmy Burns

Blues is like a parent you always have to respect. But I’m happy that blues, for a matter of evolution, is melting with other genres, without losing its quality.

What are you miss most nowadays from Koko Taylor and Etta James “era”? Give one wish for the BLUES

Like Botticelli, Benjamin Franklin, Leonardo da Vinci and many others, Etta and Koko, Freddy King and Robert Johnson and many others are a cultural heritage we need to preserve and keep alive! History doesn't disappear, like their voices so well imprinted like written artworks. It would be fantastic that schools promoted the knowledge of our own origins, so the study of painters, sculptors, inventors, but also singers and composers (there should be new school programs).

Maybe happiness is off stage, when people comes to shake your hands and tells you that for a moment, you were able to let them forget about bad thoughts, when people respects your job, buys your cd and understands what hard job it was to do it. I love when I’ve been given respect and I like to carry on a “dialogue” with people at the end of a concert. 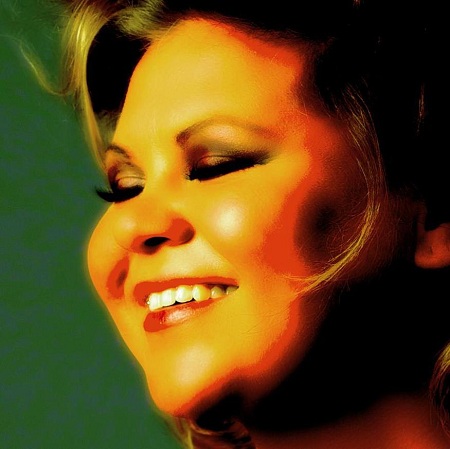 I think that all my loves should be captured in a painting, but also all my tears...so I think that it'll come out a Picasso painting or a Gaudi' one, colorful, where nothing is so clear, but you can see everything.

From the music point of view what are the differences between the Italian & US blues scene?

Of course blues if originally American, for sure...however I can tell you that both in Italy and Europe there are lots of aficionados and passionate people for blues. People that listens to blues is characterized by passion and devotion to this great style.

The first time I’ve been asked to sing for the pope was April 1st; as in America, in Italy this is “April fool's day”, with lots of jokes, and I really thought it was a joke, but it wasn't...ah ah ah. It has been a very emotional event where I could personally shake the pope's hand (Giovanni Paolo II). I’ve sung 3 times for him and other 3 times for Pope Benedetto XVI. There were thousands of people crowding huge areas, and at night, all those lights, lighters, mobile phones turned these areas in starry lawns, wonderful. What shall I say? I hope I will be given another opportunity very soon.

What are your expectations for the future, would you like that you remain in the ​​Blues Jazz circuit or move to a more commercial path?

“Days like this” is the result of research, hard work and passion, so for the moment I’d like to take care to this new-born baby. Each music experience I had, always took me back to jazz and blues and for now i want to dedicate all myself to this strong love. 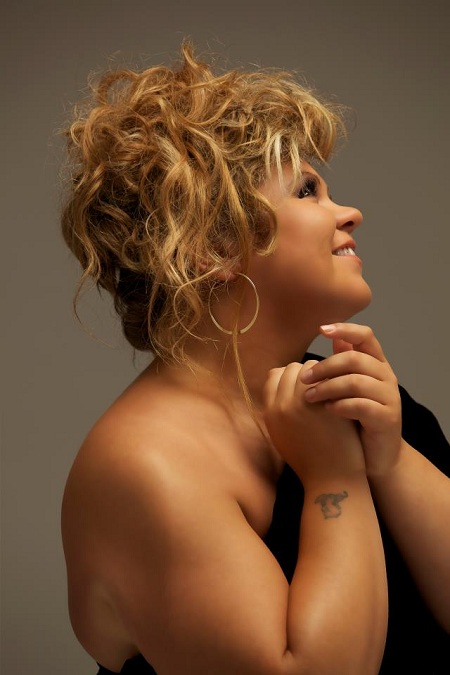 My advice is that of working very hard, only in this way you can reach the final results. You need to invest on yourself and try hard. I’ve been encouraged and supported a lot, and I’d like to do the same with the new aspiring musicians. Don’t give up. In your life, there are lots of qualities you should have. You can have talent but not the proper mental training; you can have money but not talent and so on. There are lot of useful qualities for the career...you should discover them and use them at their best.