Talking with photographer Michael Romanos, his images captures with artistic view the sense of a person

"I hope that my photographs convey a sense of the person in a way that can add to the viewer’s enjoyment of the artist’s work. I never want my vision to overwhelm the subject."

Michael Romanos has been photographing people professionally for more than thirty years. His portraits of celebrities have appeared in the pages of Vanity Fair, The New York Times, House and Garden, Time, The Boston Globe, Ms., The Village Voice, Inc., The Boston Phoenix and many other publications.

His photos of musicians, writers and actors are used by them for publicity and appear regularly on book jackets and CDs. He is known for images which capture the sense of a person as well as their likeness. 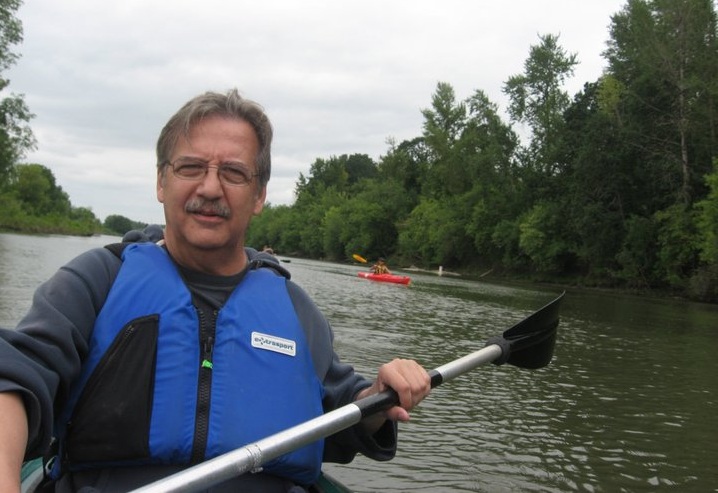 In addition to his work with prominent public figures, Michael Romanos is also available to create portraits of private individuals. His distinctive black and white portraits are treasured for being both flattering and faithful to their subjects.

When was your first desire to become involved in the photography and what does Image and music offered you?

I grew up with Life and Look Magazines and more than TV or movies these magazines defined the images that I carried of the musicians and writers whose work I was inspired by and enjoyed. I thought that if I could make these kinds of photographs to share what I felt about these artists then I would be in a small way adding to other people’s understanding and enjoyment of these artists. The bonus, as a fan, was the opportunity to meet and talk with some of them. 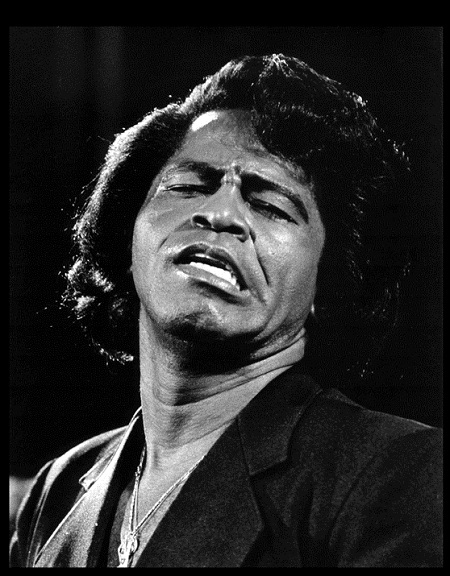 To be true to myself. I learned not to try to imitate other photographers, as much as I might admire their style, to follow my own path and photograph in my own way. Ray Charles was much more successful as himself than he was when he was emulating Nat King Cole. I would not compare myself to him but I did try to learn from his example.

What characterize your work & progress and how do you describe Michael Romanos philosophy about the IMAGE?

I hope that my photographs convey a sense of the person in a way that can add to the viewer’s enjoyment of the artist’s work. I never want my vision to overwhelm the subject. There are a number of photographers out there whose images reveal more about the photographer than the subject and that is not my goal. The most successful portraits, I feel, are the ones that are collaborations between photographer and subject. The many images that Philippe Halsman made of Salvador Dali are a perfect example of this. In photos of musicians in performance, my goal is to capture an image that is either immediately identifiable as that performer or shows a side of an artist that is totally opposite the commonly held perception. One or the other.

There were many “best” moments. Usually when I got to meet someone who I admired as an artist and I found them to be thoughtful and kind people as well. The worst was when I accidentally ruined most of the negatives from a shoot with Robert Duvall.

Who from the artists and writers you have shot had the most passion for the image & camera lens?

Nam June Paik understood exactly what I wanted to do with my image of him and was happy to co-operate, in contrast Steve Allen couldn’t stop trying to tell me what I should do.

Are there any memories from Tom Robbins, Robert Creeley; and Frank Zappa which you’d like to share with us? 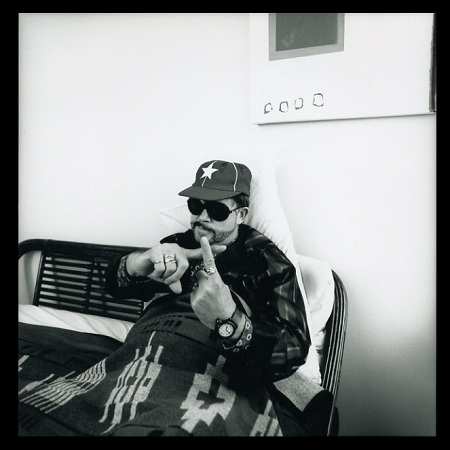 Tom Robbins was, like so many of my most accomplished subjects, very willing to work with me and not try to dictate the shots. I photographed him in his bed with a yellow legal pad because that is where and how he writes all his novels.

Frank Zappa was traveling the country debating Tipper Gore over the issue of warning labels (for obscenity) on record albums. In the spirit of the “Come Clean for Gene”, Eugene McCarthy Presidential Campaign, Zappa had cut his hair and dressed in an Armani suit. He cleaned up real nice, as the saying goes.

I went to the Rolling Stones fiasco at Altamont in 1969 to photograph but it soon devolved into the disaster chronicled in the movie Gimme Shelter. I put away my camera and assisted the medical staff. I have never regretted that choice.

Which is your favorite photo and what do you feel is the key to your success as a photographer?

My portrait of Nam June Paik is, for me, just perfect. It has all of the elements that I wanted and absolutely nothing superfluous. The old fashioned TV is to acknowledge his status as the original video artist, carrying it on his shoulder mimics a typical Communist Worker pose to reference his fleeing his Korean birthplace during the war, and finally his impish smile speaks to the sense of humor that was present in so much of his work.

Be prepared to be poor. 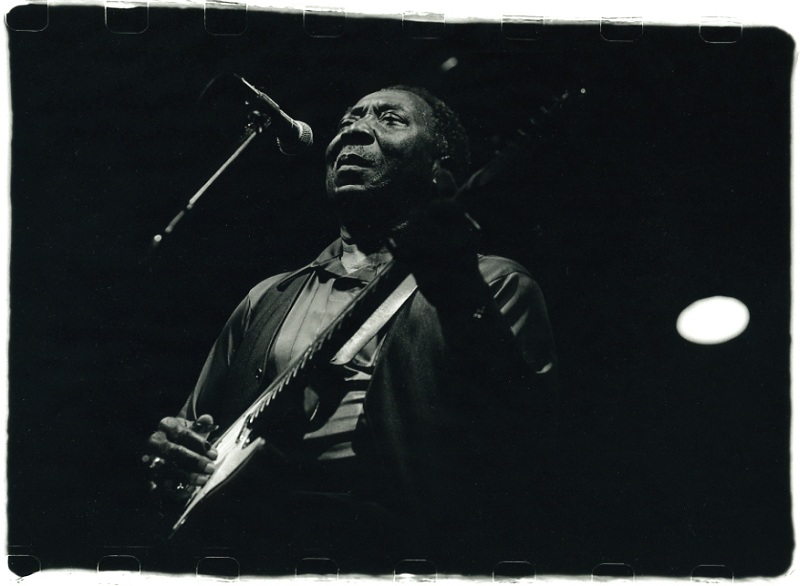 "After the show I got to visit with him (Muddy Waters) in his dressing room and he was not the least bit pretentious. It was all about laughing and enjoying himself and the ladies with him."

Would you mind telling me your most vivid memory from your shooting Blues Jazz musicians?

There are a few.

Elvin Jones was such a monster drummer and so fast! That was the only time I ever resorted to a motion blur in a photo.

What's been their experience from Muddy Waters, Bo Diddley, and James Brown concerts?

I photographed Muddy Waters very late in his life and career and during the show I was the most conscious that I have ever been that I was in the presence of a legend and that there would never again be anyone to compare with him. After the show I got to visit with him in his dressing room and he was not the least bit pretentious. It was all about laughing and enjoying himself (and the ladies with him).

I photographed Bo Diddley in 1969 and then in 2002, He rocked as hard as a 20 year old on both occasions. After the 2002 show I visited him backstage and brought him a copy of one of my 1969 photos. He not only figured out by looking at it, what year it was taken, but he remembered the physical layout of the club he had played in. The club had been gone for more than 30 years and I can only imagine how many places he had played in over his career.

I photographed James Brown a number of times over the years. Once in the early eighties, when his popularity was in one of its low points, the show was in a hotel ballroom and attended mostly by the long term faithful. I was positioned near the stage in a crowd and I saw a photographer from one of the local dailies looking around in a panic until he spotted me. His nickname was Swede and he looked it. He also was clearly out of his element. The band was already playing when he worked his way over to me and asked me to point out which one was James Brown. I told him not to worry, when James came on, he would know! 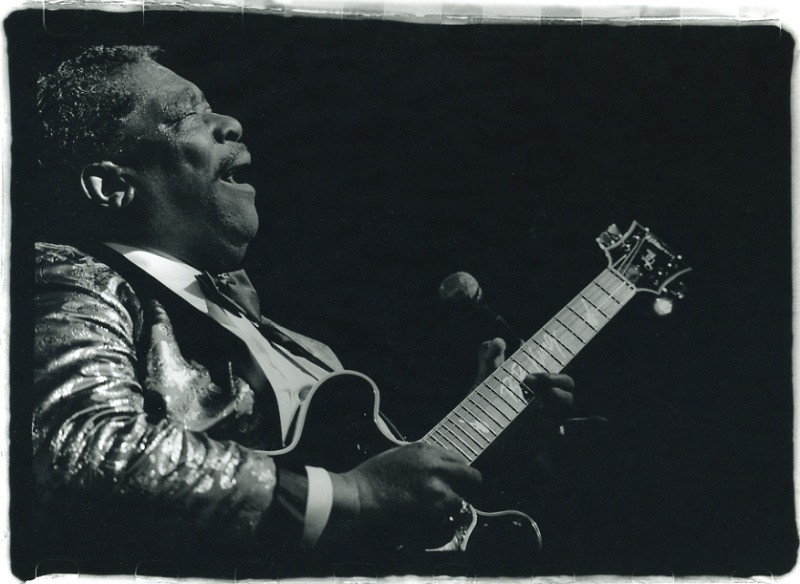 "There were many 'best' moments. Usually when I got to meet someone who I admired as an artist and I found them to be thoughtful and kind people as well." (B.B King © by  Michael Romanos)

Some music styles can be fads but the blues and Jazz are always with us. Why do think that is?

Like all art that lasts, they connect on an emotional level. They are from the heart, to the heart. I am still moved every time I hear Otis Redding sing the opening to “Try A Little Tenderness” and it’s been nearly 50 years and thousands of listens since I first heard it. It never gets old.

What is the “feeling” you miss most nowadays from the past years?

I suppose each generation has felt the same way but I really miss musicians motivated by emotion and a need to create. A lot of what I see these days seems to me to be a cynical approach to music which is more of a marketing plan than a creative outlet for the performer.

I’m sorry, as a gentleman I am unable to tell you about it, but it does make me smile to remember it.

You have shot many people, which are mentioned to be a legend. It must be hard, but which meets have been the biggest experiences for you? And why?

There have been a few but the thing that they all had in common was that the bigger the legend the easier they were to get along with. They had nothing to prove and were almost always down to earth and approachable. 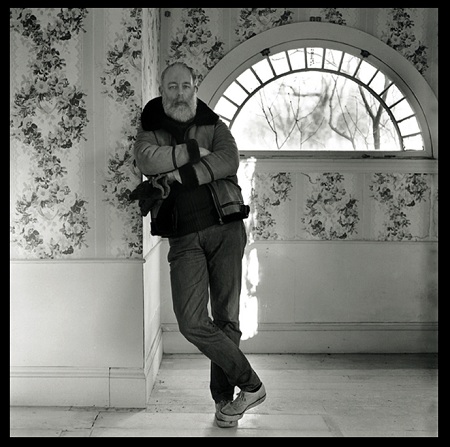 Thankfully, there have been many, however if I had to choose one it would be sitting in Edward Gorey’s kitchen as he put about six teaspoons full of sugar into the cup of tea he had made for me.

"I suppose each generation has felt the same way but I really miss musicians motivated by emotion and a need to create."

I can’t think of one.

Your name (Romanos) has Greek origins you have some connection with Greece?

About my name, yes, my grandfather was from Patra, Peloponnese. Romanos was his stepfather's name his name before that was Tsoulos