"Don’t go with the flow. The majority is usually wrong."

Bruce Dodson is a sculptor, photographer and writer of fiction and poetry in Seattle, WA. He was born in Alton, Illinois and moved to San Francisco where he worked as a consultant electrical designer until the 1980′s recession. He then moved to Seattle to work for a small group of consulting engineers contracted to Boeing.

Boeing downsized the project they were working on after only three months and he found himself a stranger in a strange land: over fifty, over educated an unemployed for three years – lost in Seattle. When was your first desire to become involved in Sculpture art, writing and poetry?

Charles Plymell was the influence that got me into poetry and writing. I met him and Pam at a nude party at his place, but it took some years for me to take myself seriously as a writer. I was started sculpture in college when in my 20’s.

How and where did you get the inspiration for your books and poems?

They thoughts just come - faster than I can write them down. I am in the midst of moving to Sweden now and things are more or less on hold except for my blog which is now mainly a series of notes on my   experience of this process: On Leaving America. The older stuff has photos from the 60’s, some sculpture and photographs.

What in your life make you a GOOD writer and artist?

I think the fact that I’ve had a lot of experiences. I traveled a lot between contracts. Stayed as long as the money lasted. Thailand, India, Nepal, Brazil, Holland, East Africa - most of Europe. 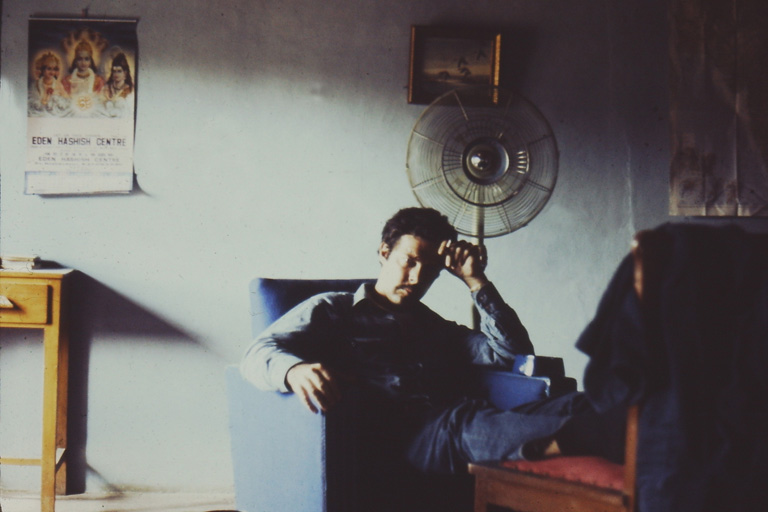 "Charles Plymell was the influence that got me into poetry and writing." Photo: Bruce on Opium Nepal at 80s

How do you describe Bruce Louis Dodson's poetry and art work?

Life as it is - Contemporary fiction from a slanted point of view. I have a different way of looking at things.  A lot of travel poetry inspired by places I have been.

I don’t worry about that and have neither that I can think of.

Which is the most interesting period in your life? How nicknamed "The Willie Rat" arose?

Most interesting: San Francisco 1960 – 1980. Willie the Rat happened in the 60’s. I was writing some stuff that could have made it hard for me to get work when published. Some was published in Processed World, an anti-establishment rag that was doing well in the 60’s. I was working as an electrical consultant at Chevron and Bechtel in S.F. I have just learned that Willie the Rat was a 20’s Mafia figure.

What does San Francisco Acid Culture scene mean to you?

I loved it. You could get Owsley and Sandoz stuff when it was still legal. Ito opened up new realms of thinking.

What's been your experience from San Francisco’s psychedelic community?

A look at life from a different point of view. It was like waking up in some ways. 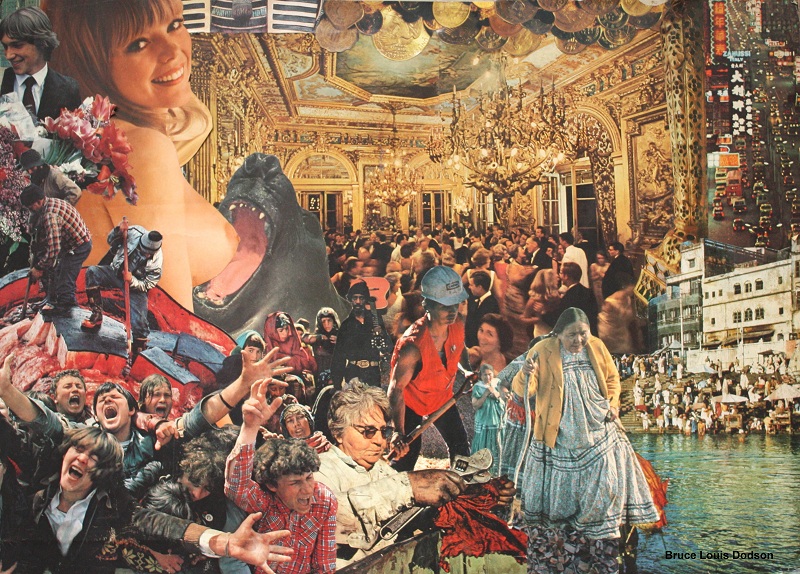 "You could get Owsley and Sandoz stuff when it was still legal. Ito opened up new realms of thinking." Photo: Bruce's Collage - Life on Earth

What is the “feel” you miss most nowadays from the 60s? What we should keep or forget of the Haight-Ashbury era?

I miss the naive belief that things could be changed. The Haight-Ashbury decade was a truly amazing decade. It started out wonderful. I saw Jimi Hendrix play in the San Francisco panhandle, free.  Janice Joplin, the Deads, and so many others. There were good times that were finally ruined by bums and rats moving in. By the early 70’s store fronts were boarded up with plywood and the street looked like it had been bombed.

Nothing short enough to write here. One of my short stories was just published by Sleeping Cat Books – “Trips of a Lifetime Anthology” A bus trip in Southern India.

What are some of the most memorable photos you’ve around the world? And what are the stories behind those?

Photos of India I think, the Ganges at Varanasi. I am always happy there. Another place where I feel at home. Some photos from Thailand and a few from Brazil.

What do you learn about yourself from the travels? Which memory from your experience makes you smile?

I learned I could survive and find my way anywhere on earth. 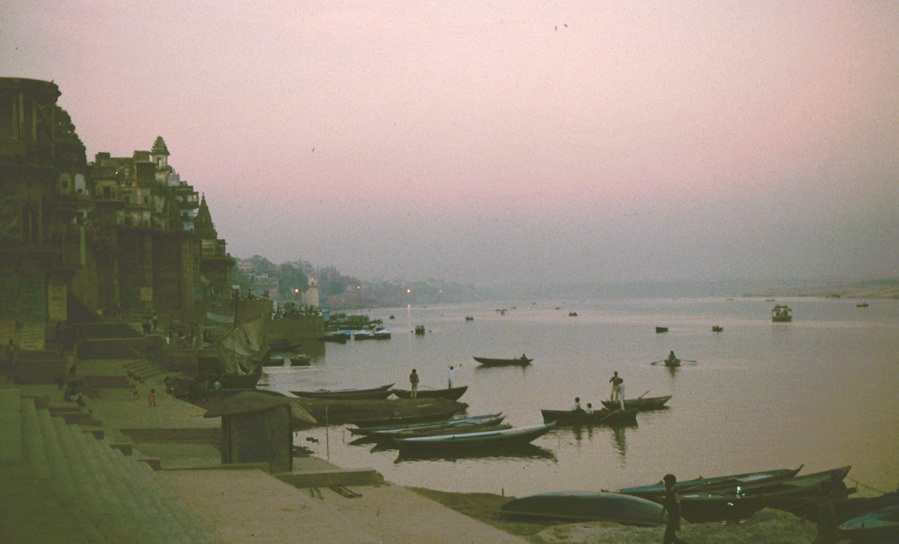 "I’ve had a lot of experiences. I traveled a lot between contracts. Stayed as long as the money lasted. Thailand, India, Nepal, Brazil, Holland, East Africa - most of Europe." Photo by Bruce Dodson, The Ganges at Benares, India

How did the idea of "Lost In Seattle" and "A Loss of Grace" and “An Unhappy Medium” come about?

Lost in Seattle is 80% creative non-fiction. I was working as an electrical design consultant working mostly with refineries. Gas went down to $75 a barrel in the seventies and refineries stopped expanding. I was out of work for a while, and then came to Seattle on contract to Boeing. I was laid off with 20 others in my group a month later. I was over fifty then and out of work for about 3 years. It’s almost the same with “A loss of Grace.” My mother had Alzheimer’s and “Grace” is a look at the humorous side of that which is not easy to find. “An Unhappy Medium” is about 50% creative non-fiction inspired by 2 months with a fortune teller in Brazil.

Seattle, Chicago, San Francisco – from the artistic and cultural point of view what are the difference between the US?

I liked Chicago, but was never there in winter. Seattle has been okay, not exciting and lots of rain. San Francisco was the only place where I felt like I belonged. I loved S.F. but it is very different now of course.

Don’t go with the flow. The majority is usually wrong. 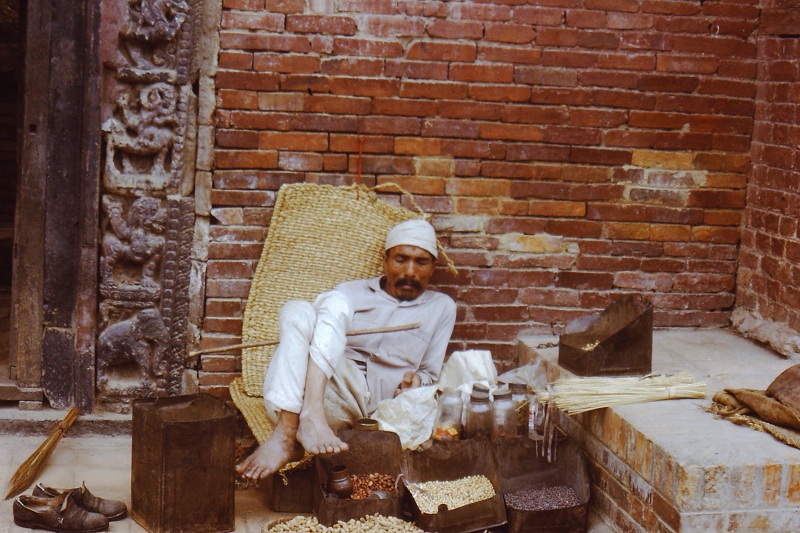 "Life as it is - Contemporary fiction from a slanted point of view. I have a different way of looking at things.  A lot of travel poetry inspired by places I have been." Photo by Bruce Dodson, Nepal

What from your favorite thing – books, records, photos, etc - you would put in Bruce’s "capsule on time"?

How you would spend a day with Lenny Bruce?

Lenny depends on if he was off his legal battle stuff. I saw him once in North Beach, S.F.  Maybe at the Both & Club. He was way ahead of his time.

Carl Hiaasen’s books make me laugh. “Skinny Dip was great, and some others. The movie, “Meet Joe Black” touched me. It was taken from a much older book, “Death Takes a Holiday”.

What Art has offered you?

What has art offered me?  Certainly not money. An inner satisfaction I think. 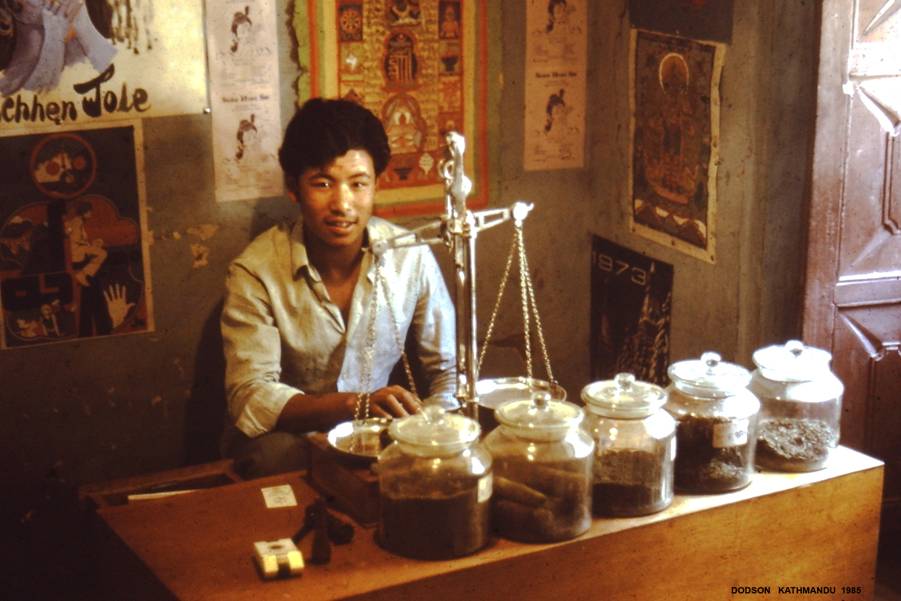