"An absolute freedom of expression, as I had learned from my great mentors, Allen and Ira Cohen that to be “beat” was really to be free (also Dylan and Joplin)"

Nina Zivancevic, a prominent Serbian poet, novelist, essayist, art critic, literary scholar and translator, lived in lower Manhattan prior to the outbreak of the war in Sarajevo in 1992. 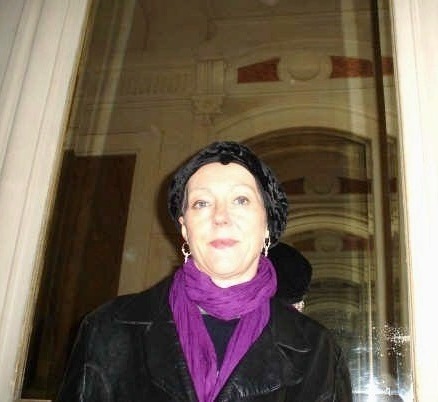 Zivancevic introduced the work of Allen Ginsberg, Kathy Acker, and Charles Bernstein to East European readers, and her polyglot sensibility is highly informed by her immersion in the downtown New York art and literary world of the 1980s.

Her numerous books include Death of New York City and Inside & Out of Byzantium. She was a close associate of the poet Allen Ginsberg, collaborating on the first translation of his works into Serbian, and serving as Ginsberg's teaching assistant at Naropa Institute. Zivancevic was a noted figure in the East Village poetry and performance art scenes of the 1980s. Today she lives in France and teaches the history of the American avant-garde at the University of Paris.

When was your first desire to become involved in Beat literature? What does "BEAT" means to you?

When I first encountered the “Beat” literature I was lying in my bed in Belgrade and my husband at that time, Zoki-Poki (Max) was telling me that there were marvelous American writers such as Corso, Ginsberg and Hubert Selby Jr. who had to be translated into Serbian, our mother-tongue. So “beat” meant to me something very outlandish but important, to be dealt with.

What do you learn about yourself from the Beat literature? What has offered you?

An absolute freedom of expression, as I had learned from my great mentors, Allen and Ira Cohen that to be “beat” was really to be free (also Dylan and Joplin)

Any experience in life can make you write a good poem or a good piece of literature, joyful or a sad one. But it has to be unusual and absurd in a way, to deal with the extremes, otherwise why would one write about a fresh glass of milk you easily stole from a supermarket, or the one that your father nicely bought for you… 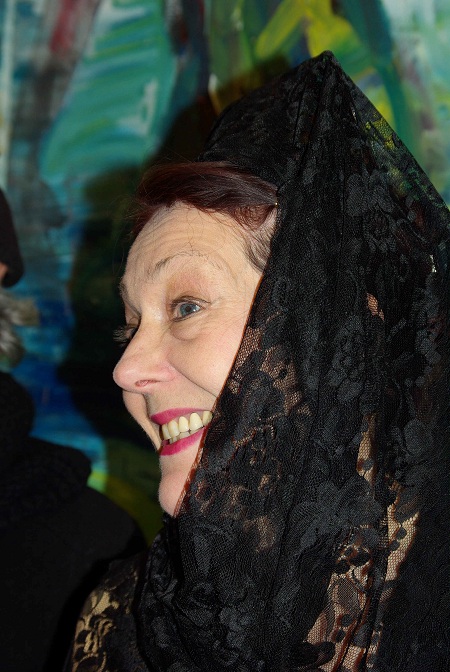 Certain knowledge that I am still alive and in spite of myself and all other circumstances still writing, breathing, playing music…

How important was the music in your life? How does affect your inspiration?

Oh, enormously important- I see poetry as a section of an enormous musical heritage, I guess Bob Dylan would say the same thing and Allen always used to say that he was the best poet of them all…

What is the relation between music and literature?

Well, simply putting it- you cannot be a good writer and have no ear for music, cadence, pace etc...they come to me in one big package, I guess even the early Modernists would say the same thing…

What is the line that connects the legacy of Ginsberg, Cohen, Kathy Acker with your generation and beyond?

Oh, I don’t know, to me these three were my dear friends and I just miss them so much…

What are the differences between “Europe and USA” from the point of view on art and literature?

Well, there are some differences that I usually deal with in my course of the avant-garde at Paris 8, but I never fail to mention that the beginning of that wild American avant-garde experience came from the European artists and writers, composers etc; who escaped Europe in the 20th century because of the World wars, then their experience sort of “counter-fired” and became purely American, went back to rejuvenated Europe as such and so on...

Do you know why the Beats are connected to underground culture and what characterize it?

Yes I know, but it is tiring to trace all these connections - just to say that the Beats were never far away from the street-culture and street-experience, the way the French troubadours were plunged in it, they were never at the service of the ‘court’ or whatever government in question… 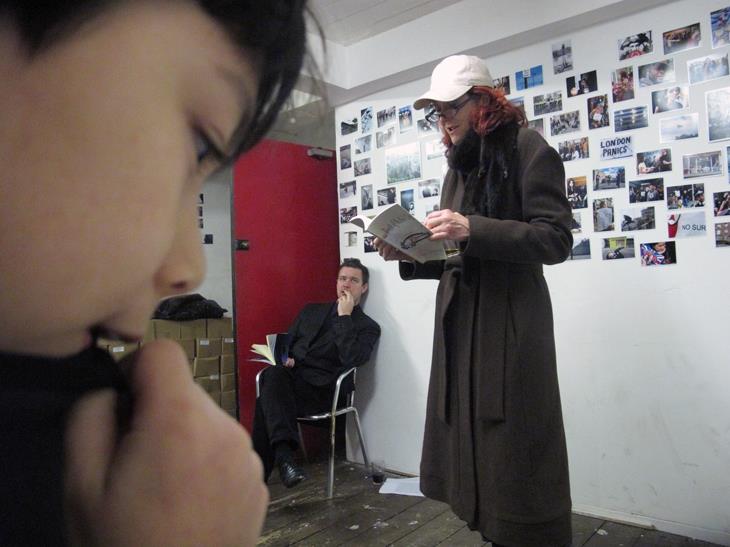 It must be hard to pick, but which meetings have been the biggest experiences for you?

What is the line that connects the legacy of Beats with Buddhism and special with "crazy wisdom" of Trungpa Rinpoche?

Well, Allen and Anne Waldman were Trungpa's disciples and they invited him to start the school/meditation center "Naropa" also the Shambala publication etc... I cannot tell you exactly the links anyways; many years later I studied with other Lamas of the so called Dzogchen Vajrayana tradition and also Lama Tenzin who was of Kagyu/Dzochen traditions

He always used to make me laugh: he surprised me once - before I was to deliver my baby in Paris, he showed up all of a sudden, took a real plane from NY, and said: I hear your baby will not come out quickly, in fact, it overdid it, passed all the delivery terms - so I came over to make you laugh, so that I would push you into labor by making you laugh...a superb photographer that he was, he placed a plate on top of my belly and was making me laugh until the pocket of water had burst and I came into labor… 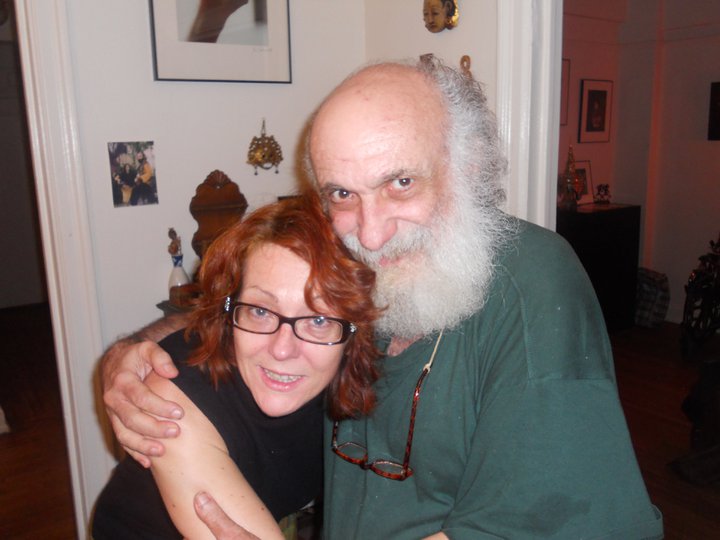 Tell me a few things about your meet with Allen Ginsberg, which memory makes you smile?

Oh, I met Allen in Belgrade in 1980, as a part of an official Writers’ Union organization  and he visited my small studio with Peter Orlovsky, but just as they rang the bell, my aunt Dana opened the door and told them: If you guys voted for Reagan I won’t let you into our house.. That was the pivotal moment which decided on our friendship (Allen had later told me), as they recognized some Eastern European Anarchists’ background in there, so close to their roots that they decided to befriend us right away!

Tell me about your first meet with Gregory Corso?

I met Corso for the first time in Colorado in 1981 and he was very impressed to learn that I was his translator; he almost immediately wanted to try my ring on which I naively handed to him, but then he said "now you see it, now you don't see it- it's a very nice ring, now it's mine!". It took Allen 3 weeks to get it back to me. However, he showed to be one of the nicest, most generous people I had met when the police arrested me for smoking a joint in the street (also in Colorado) and I had an audience 6 months later. As I moved to NY and could not fly to Colorado to show up in court, I had not any money, I ran into Corso at Allen's and when he had heard my story he pulled out 400 dollars out of his sock and said "Take it, kiddo, for the plane ticket, you need to show up before a judge, you don't need a bad record in the US."

There is a very dear one: I met Corso (perhaps for the last time in my life) in 1986 in New York with my father at Astor place where people were peddling goods and selling second-hand objects. Corso said "see, it's a shame you, the worthwhile guys from the East, are just trying to buy some technical gadgets, while we, the Americans, are trying to get rid of them"...He sounded so real, so profound, so true...

How important was the music in Corso's life and why Gregory Corso is connected to underground culture?

I think that the questions are superfluous, as Corso, like all "the Beat cats" had profound and close ties to jazz and all the music of his era, and why he was connected to underground culture, or any culture at all, is like trying to find out why any people like culture and some are not inclined to it altogether! why do some people become artists and some do not? who knows, this world is so beautiful because we are all so different!! 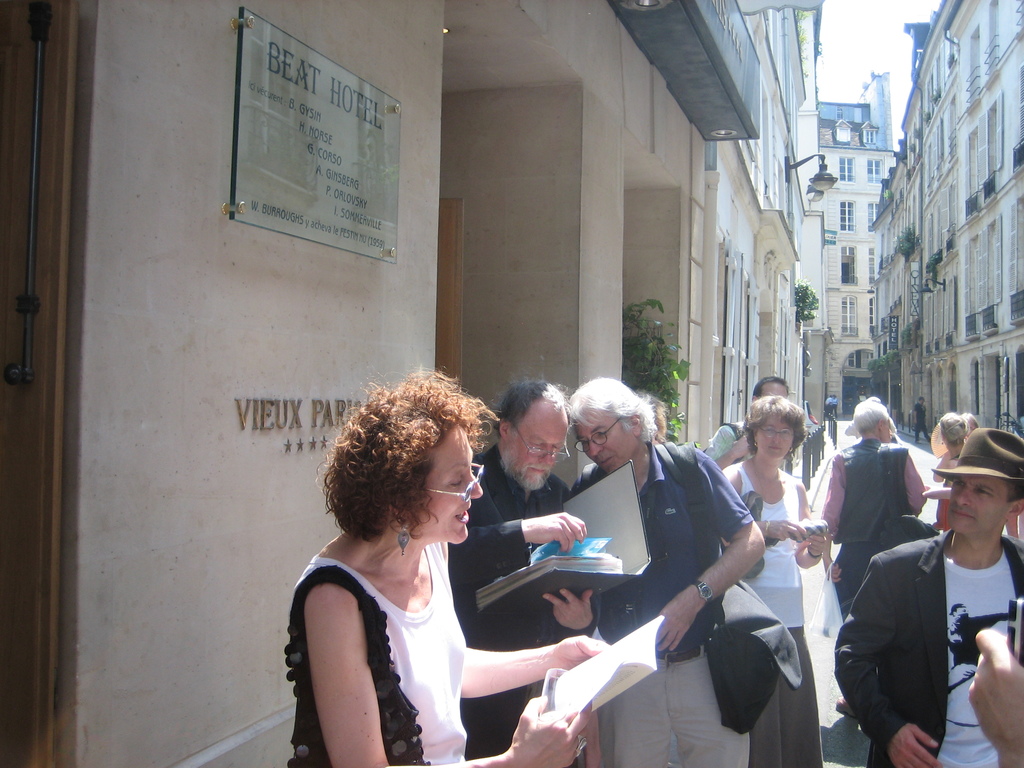 What were the reasons that made Paris “the Mecca of the intelligentsia” of 50s?

Oh, there were certainly some historical reasons, mainly the sojourn of many international artists and writers in it, and the counter-action of the French intellectuals of that time…

When did you begin reading your works? What was that first experience like?

I had begun reading my work in Colorado with Allen and Anne (Waldman) in 1981, that is, after hearing them perform their own work, and I thought, why not, if they can do it- I can do it too. However, I felt terribly young and insecure and I did not master English language so well, I became much more comfortable later, in New York of the 1980s when I kept performing in small clubs, giving the legendary “one woman shows”, along with Karen Finley and Ethyl Eichelberger etc - then I felt “I was in command” of that thing called “the show”.

What are your hopes and fears on the future of Literature?

Ach, the show must go on and there will always be someone somewhere writing good stuff called ‘la literature”. 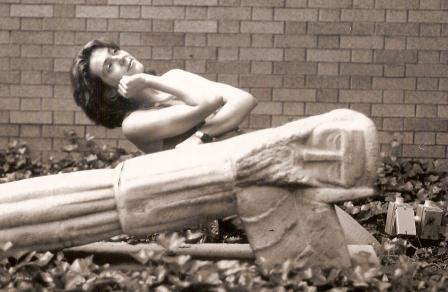 The best advice was given to me by a great Beat writer Herbert Huncke who told me once “no matter how you feel, push yourself to write one line a day”…and that’s something I would always say to any new kid on the block.          Nina in MOMA sculpture garden, photo © by Ira Cohen

The creation of Ira Cohen’s “Akashik records” books and artistic experiences in the mid-1980s which became like a spontaneous movement of putting the interesting work of artistic work into the “capsule of time”.

It was already done by Ira Cohen—he immortalized Herbert (Huncke), Pedro Pietri and myself on a photo taken at midnight in the darkest quarter of New York- we all had the same silly and sad expressions on our respective faces…