Spanish artist Miquel Antonio de Padua Aguiló talks about the artistic journey and paths of his art, life, and music

“Blues music is perhaps one of the most influential with racial problems, which I only know from the history of the same musicians who had to live and that the British blues musicians made known to the rest of Europe and the world.”

The Paths & Passion of Creation

Artistic journey of Miquel Antonio de Padua Aguiló life: Born on a sunset day of 6 August 1951 in a house of the little village of Calvía (Mallorca). Motivated to draw at the end of the sixties by one of the artistic currents of those moments called psichodelia and influenced by artist like Roger Dean, Rick Griffin, Mati Klarwein, H.R.Giger as  well as artist like Aubrey Beardley, M.C. Escher, Gustave Doré, Dalí or any surrealist or visionary world. I began to draw the posters for the parties and decorate objects like piano, stones, pottery, etc. New artistic interest as photography in analógic clasic way. Art always in my mind having my first single exhibition in 1982 in a popular Record Shop of Palma called Xocolat...nowadays the place still exists and have music performances, normally acoustic, these has been the places in preference where I like to show my drawings. The powerful of the British Invasión probably is guilty of my preferences in music as happened to a lot of youth as well in Spain in which took place with more or less success, Mati Klarwein the artist who create Santana Abraxas was living in the village of Deià, Kevin Ayers, Pete Sinfield, as well of Robert Graves, some of their sons Thomas and John played in a Blues Band, still now! Discovering Rembetika Blues, but here there are some great blues musicians as Victor Uris, Big Yu-Yu, Z-66, Balta Bordoy, Miguel Angel Pericás, Pa amb oli blues band.

How has the Rock counterculture influenced your views of the world and the trips you have made?

The counterculture of Rock influenced me in my personal way of seeing things and having some principles to face the world of consumption and material that came later. The trips that I have made have always been due to the influence of my forced incorporation to the military service of Western Africa in the Sahara and the countries that I have visited Morocco, Tunisia, Egypt, Turkey and that was a place of worship for Western musicians like Brian Jones , Jimi Hendrix, Frank Zappa ... instead of the Wha café in New York, I visited the Hendrix café in the small village called Diabat next to Essaouria, the posters that decorated the place were from the Smash Hits album and visited the places frequented by writers, poets and painters.

What characterizes your artistic philosophy? What moved you (emotionally) of art and poetry?

My artistic philosophy is following the paths of creation and finding those hidden images in your brain and you do not know why you get to discover like a flash and that you turn into visual poetry.

What has been the relationship between music, poetry and art in your life and art?

Incomprehensibly there have been two separate ways, my initial interest with music was the blues through watching a performance of The Animals in the years 1966 and I decided to be part of a band as a bassist, but in the creative part of the drawing I listened progressive instrumental music mostly I discovered poetry by reading texts by Baudelaire, Whitman, Langston Hughes, Bradbury, music, poetry, where you are looking for inspiration. "My artistic philosophy is following the paths of creation and finding those hidden images in your brain and you do not know why you get to discover like a flash and that you turn into visual poetry." (Miquel Aguilo with his artwork / Photo by Mico Munar)

How important was the music in your life? How does music affect your mood and inspiration?

Music has always been very important, although at first, I only listened to music in the wave of blues rock, over time I was interested in any quality music of any style.

What do you miss more of the music of the past today? What are your hopes and fears for the future of?

With less technical possibilities and diffusion great talents were discovered in the past and they were able to change our lives, in my opinion the great concerts no longer transmit any essence today, only pure commercial business.

What were the reasons why the 60s were the center of artistic, spiritual and social research?

I suppose it was like in the rest of the world ... since my influences were not local, the passage of the hippies on the way to Ibiza and Formentera I knew and felt identified with, many of them deserters of the Vietman.

The sixties in Mallorca as an experience of life has been one of the best moments that the city lived in musical ways, a lot of local bands had an “earn” of living as many Hotels need for tourist entertainers now

Thanks to many many artists who lived the gold sixties era fed future generations as there are a good number of talented musicians ... like Victor Uris, Big Yu-Yu, Miguel Angel Pericas, and oriented towards the Blues. 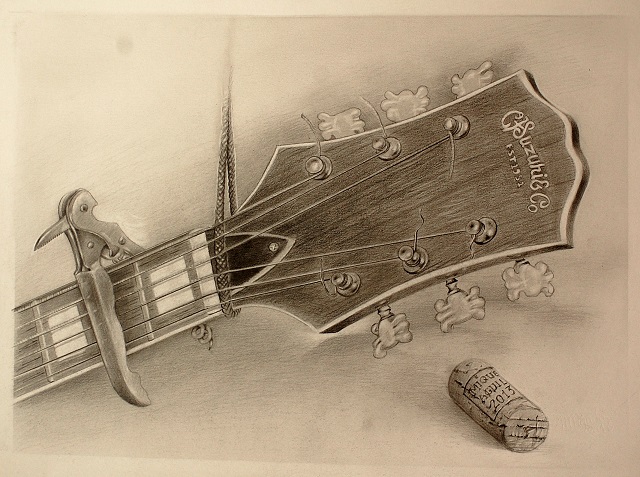 "With less technical possibilities and diffusion great talents were discovered in the past and they were able to change our lives, in my opinion the great concerts no longer transmit any essence today, only pure commercial business." (Artwork by Miquel Aguilo Pallicer / Susuki 1951)

Where do you really want to go with a time machine? What memories (books, records) would you put?

I do not need a time machine, I would only ask for less building in Mallorca to be happier with the place where I live and for society to have a change of mentality with the money machine that leads to consumerism and creates a human vacuum, but if I would like to return to live the great moments that Majorca lived with the visit of great musicians like Ray Charles, BB King, Eric Burdon, The Animals, Brian Auger, Wilson Picket, The Hollies, Ohio Express, Zoot Money, Alexis Korner, Jimi Hendrix, etc.

What is the impact of art and music on the racial, political and socio-cultural implications?

Blues music is perhaps one of the most influential with racial problems, which I only know from the history of the same musicians who had to live and that the British blues musicians made known to the rest of Europe and the world.

What are some of the most important lessons you have learned from your experience in art and music?

In my case  music and art help me a lot as I had to work all my life like Screamin´ Jay Hawkins in the film Mystery Train of Jim Jarmusch at a reception desk thanks to this I survive better my hopes, although I´ve always having single exhibitions, collective exhibitions and now in the recent days I think that if you propose a goal there is an illusion to continue creating, existing and be happy. Bands that I usually listened The Animals, Spencer Davis, The Rolling Stones, Beatles, Grateful Dead, Jefferson Airplane, The Doors, Savoy Brown with Chris Youlden, The Nice, Jethro Tull, Genesis, Janis Joplin, Jimi Hendrix, Cream, Aphrodite Child, and others as War, Santana, Barrabas, Osibisa, Miles Davis, Dizzy Gillespie and all infinity of blues players from Piedmont, Delta, Texas, Chicago, etc. Ravi Shankar, Ali Khan, etc. And now thanks to you discovering Rembetika blues.