"The arts, not just music, has an impact on so much from a better outlook on life, to better cognitive skills to building up the local economy. If you have artists in your area, then when people come to see or hear or taste or feel that amazing art, they will also stay in your hotels, eat in your restaurants and so on."

Joey Stuckey: In The Shadow Of The Sun

Joey Stuckey is an award-winning blind guitarist, songwriter, singer, composer, producer, radio and television personality, music columnist, educator and sound engineer. He is also the official music ambassador for his home town of Macon Georgia. Joey's guitar style is reminiscent of rocker Jeff Beck and jazzer Wes Montgomery, while his vocal influences range from Mel Torme to Gregg Allman. When blind guitar legend Joey Stuckey gives inspirational talks about overcoming odds and helping people define success on their own terms, he's big on the concept of living a life of intention. Yet when the veteran blues rocker booked his progressive Americana trio into the legendary Sun Studio for a three-hour session on an off day from their tour, he had no specific plan except to record a few originals and covers. Letting the legendary spirits in the room (Roy Orbison, Johnny Cash, Elvis, et al), the vintage 50's-60's equipment and the refreshing spontaneity of a live in the studio opportunity take over, Stuckey created In The Shadow of the Sun (2019), the most unexpected and amazing full length album of his career. Titled with a double entendre referring to both the historic room where the session took place and the singer/guitarist's own Shadow Sound Studios in his hometown of Macon, GA, the 40-minute collection features five powerful originals and fiery re-imaginings of three classics that are among his trio's most popular live performance songs. 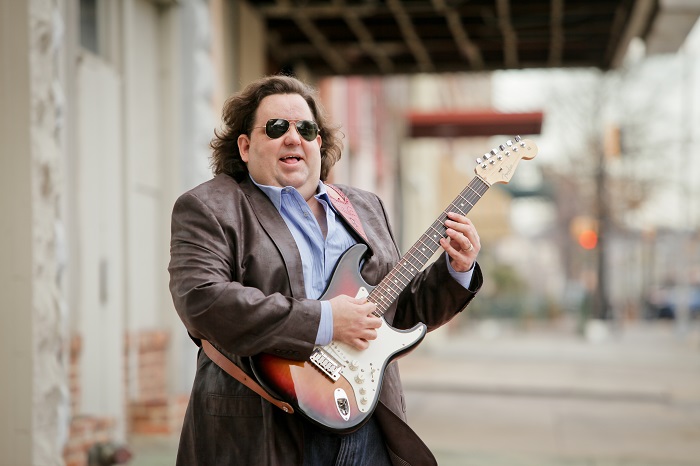 In addition to his decades as an indie recording and touring artist with hundreds of live performances under his belt, Stuckey - who has spent most of his life successfully dealing with various physical limitations, including blindness - has owned the popular Shadow Sound Studio in Macon since 1996 and has worked as a radio and TV personality, music columnist, educator and sound engineer. Besides doing radio, TV and print music journalism, he has a long history teaching students guitar, voice, music theory and sound engineering. He is currently professor of Music Technology at Mercer University and an official mentor for the Recording Connections School in Los Angeles. The Joey Stuckey Band has opened for everyone from Bad Company and Trisha Yearwood to James Brown and Smash Mouth. Behind the scenes as a producer, composer, musician and sound engineer, his resume includes work with Alan Parsons, Chuck Leavell, Mike Mills (R.E.M.) and many others.

How has the Roots and Blues influenced your views of the world and the journeys you’ve taken?

I think Blues music is one of the few truly American art forms, just like its sister genre, jazz. I think it was the great comedian George Carlin that said “It isn’t enough to be able to play the notes in the blues, you have to know why the notes need to be played”. I take his statement to mean you must understand that true blues music provides a sense of catharsis and healing. For even though we are talking about pain, we are doing it in a way that allows us to see clearly the circumstances of our life and the way to move forward in positivity. There is also the liberation of hearing someone else’s pain, set to music, which puts the lie to the idea that we are alone!

What were the reasons that make Macon Georgia a "Mecca" of Roots Rock Blues researches and experiments?

I don’t know, something in the water or air maybe. There is a subtlety of style here in the south that lends itself to being contemplative. One thing is for sure, we have an incredible and rich history which is only surpassed by the potential of our future!

How do you describe your songbook and sound? What touched (emotionally) you from the SUN records?         (Photo: Joey Stuckey & friends, Sun Studio, Memphis TN) 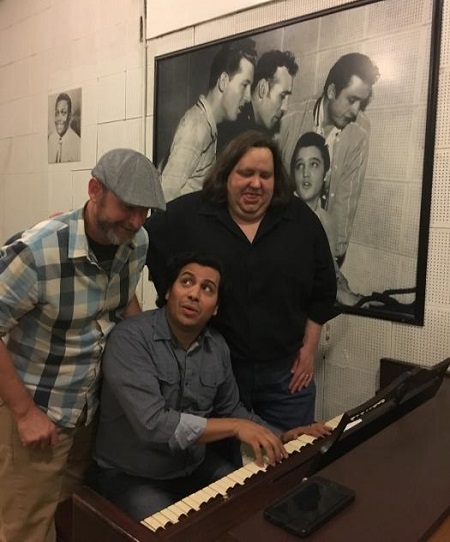 We were on tour in Memphis TN, and thought it would be fun to capture the sound of my trio as we were at that moment. The style that we present to our fans in the current incarnation of the band is what we have called “Progressive Americana”. This is a totally made-up genre on our part, but it encompasses Blues, Country, progressive rock and Jazz. We looked into booking some time at Sun Studio. You can only book three hours at a time because during most of the day it is an amazing museum open to the public!  At first, it was just a bit of fun, but once we got in to the studio, we let the spirit of all those amazing artists that recorded there in the 50’s and 60’s just speak to us and inspire us and this little fun day off became our next album!

Well, I have been so blessed to learn from and work with the best of the best. Alan Parsons, Randall Bramblett, John Kellogg, Ross Hogarth, Jimmy Hall, Al Chez and so many more, but my dad gave me the best advice ever: “the best way to have avoid a misunderstanding is to have a clear understanding”. I use that everyday when dealing with people either as a music educator, producer, Engineer, lecturer or inspirational speaker. I am always honest and up front about what I can do and what I can’t.

Oh, I have so many stories! Come see the band live and I’ll tell you some tales. But one of my favorite memories is one night we were playing in a college town here in Georgia. Now, this town was known as an easy place to find a companion for the night. Remember, I am blind—a fact that will be very important So I am on stage singing a line from Steve Miller’s “The Joker”—I love the line where Steve sings” I really love your peaches, want to shake your tree”. I don’t know why, it just always makes me smile. So, I am singing this line—and a young lady in the audience thought I was flirting with her and wanting to take her home for the night. Thing was, I didn’t know she was there. I am blind, so although to her it looked like I was singing to her, I wasn’t. After I finished the song, we did a few more tunes and then took a break. The young lady came up to me and was very angered because she thought I was flirting with her and then started ignoring her. It was true, I had know idea she was there as I can’t see, but she never did believe that I was blind. We all had a pretty good laugh once she got done telling me off.

Since the music business has been around, every time there is a change in technology or the law, someone starts saying it is the end of the business. But you know what? It is never true. The music business is hard to understand as it is in constant flux and ever-changing but if you work hard and stay on top of trends you can make a good living. I guess the thing I like the most about this moment in time is you can quite literally go to social media and ask your fans what they want. For example, do you guys want our new album to have a vinyl option? If yes, then great, we’ll make that. If no, then we do downloads or CDs instead.

I do miss the days when music was a bit more curated—right now so many people are making music, and that is a good thing, but it does make it harder to find those folks like myself that are working hard as full-time musicians. I do miss a bit of the star power of the 40’s and 50’s, but not much. Fact is, life is now, and I am too busy living it to be worried about much of anything or to wax too nostalgic. "I don’t know, something in the water or air maybe. There is a subtlety of style here in the south that lends itself to being contemplative. One thing is for sure, we have an incredible and rich history which is only surpassed by the potential of our future!" (Photo: Joey Stuckey)

I could afford a classic U47 mic! Maybe 2… While that is true, I wish we, the world in general but the US in particular, would remember that a healthy society is one that is thriving in the arts. Artists are historians, philosophers and healers in the spiritual sense. If your country is too divided to have a healthy arts scene then that is a real warning sign.

What is the impact of music to the socio-cultural implications? What have you learned from your paths in music industry?

Last year, I had a wonderful experience with Sound Diplomacy and Music Cities in Lafayette, Louisiana, as a speaker and panelist. The goal of these music conventions is to work with communities to strengthen their arts infrastructure. The arts, not just music, has an impact on so much from a better outlook on life, to better cognitive skills to building up the local economy. If you have artists in your area, then when people come to see or hear or taste or feel that amazing art, they will also stay in your hotels, eat in your restaurants and so on. It just makes good sense for state, federal, and local government to interface with artists and local businesses to make sure that we all have access to art! It is good for the artists and good for the community!

Man, so many cool places and times to choose from. Maybe with Marconi to hear that first radio transmission, or perhaps hanging with the Wright Brothers as they tried to fly. But, if I had to just pick one excursion, I would like to be with Sir George Martin and The Beatles for the recording of “A Hard Days Night”. Man, oh man, can’t you just feel the excitement in the air from that first play back of “Can’t Buy Me Love”? I can!