"Unfortunately, the impact of music on politics is null, otherwise we would probably live in a better world. Music has an impact on people’s personal life, and can probably help them to become better people, more tolerant, more open to differences, but globally I’m not convinced it makes a big change."

Christophe Losberger: The Images of Music

Swiss photographer Christophe Losberger was interested in phototography since the age of 10, when he recieved for his birthday a kodak instamatic , with which he started experimenting photography. His first publication, around 12 was in a comics magazine with a photo of a flying saucer! Crazy of music (and member of a band in those days), he shooted his first concerts around the age of 20. As a staff member of the Jazz Festival of Montreux in the beginning of the 80’s, Christophe Losberger observes and talks to the professional live photographers present there and learns a lot of tips and tricks. Trained earlier in the development and printing of black and white photos, he can print his own photos of  Miles Davis, BB King or Luther Allison, taken during his breaks at the festival. 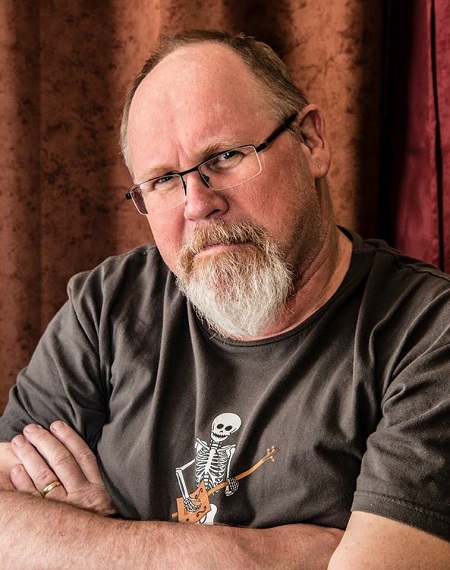 At every opportunity he will take photos of the concerts he will attend between 1980 and 1990. After a break, and the time necessary to move from film to digital photography, he comes back seriously to live photography in 2008 when he joins the newly created Blues Association of Geneva to become their official photgrapher.

His activities in photography and in the blues world will increase in the following years and he will become president of the association a few years later. Fan of blues, Christophe extends his activities and becomes the official photographer of a few blues festivals in Switzerland  and nearby France. He also attends international blues events in Switzerland and abroad. His focus is mainly blues, but he also sometimes attends some rock or pop events.          (Christophe Losberger / Photo by Patrick Neo)

How has the Blues, Rock and Jazz music influenced your views of the world and the journeys you’ve taken?

When I was a teenager I attended many concerts and festivals, mainly rock in those days, and these events were very important to me: I liked the feeling of many people gathering for a purpose and to share the love of music, whatever kind it is. I actually still enjoy that feeling. Music is an essential piece of my life: an artist expresses his feelings and those feelings touch me or not at different degrees. I wouldn’t say that music drastically influences my views of the world, but I will listen to the messages delivered by the artists I like, I will try to understand in which circumstances some songs have been written, and this will definitely have an impact on my views of the world.

What were the reasons that you started the photo art researches? How do you describe your artistic philosophy?

First of all, I don’t consider myself as an artist, but more as a craftsman. Most of the time I am not really creating anything, I am only trying to capture a particular moment and the emotion in that moment. Everything is already there. It does require a minimum of technical skills and some kind of feeling to anticipate the exact moment the photo should be taken and how to compose it, but it’s not truly “artistic” in my opinion. A few of my photos can probably be considered as artistic, if I choose to show a detail or shoot a scene in which the artist is not immediately recognizable, but this is a very small portion of my work.

I started at 10, when I received a Kodak Instamatic for my birthday. In those days (1972), photography was a serious matter and not too many kids had their own camera. I found photography very cool and attended courses in school to learn more about it and develop my own black and white pictures. Later I started playing in a band and attended my first concerts, which led of course to shooting the first bands in my twenties. 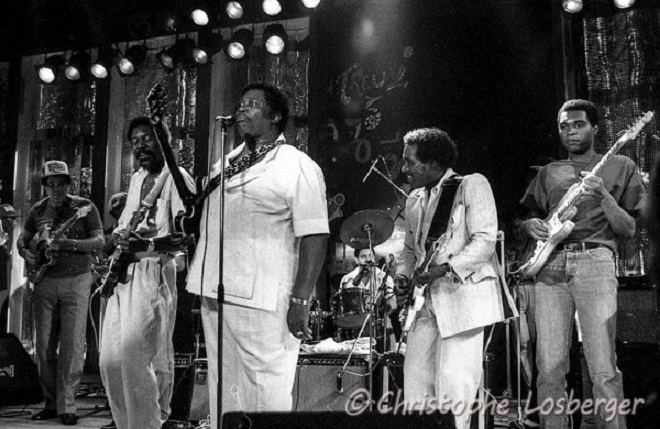 "I don’t think I miss anything from the past: whatever was good in the past is still being played one way or the other and many bands are still paying their tribute to the early blues, in an authentic way. Blues is here to stay, there will always be some people somewhere who will gather to listen to the blues." (Louisiana Red, Luther Allison, BB King, Johnny Copeland, and Robert Cray - Montreux Jazz Festival, 1984. Photo by Christophe Losberger)

Which acquaintances have been the most important experiences? What´s been the highlights in your career so far?

In the 80’s I had the chance to work at the Jazz Festival of Montreux and although I was not working as a photographer I could take a few pictures from time to time. This was a great experience, not only because I have attended some extraordinary concerts (BB King, Luther Allison, Eric Clapton, Miles Davis, …) but I could talk to many of the professional photographers there and learn from their experience. I stopped doing live photography for a long period, but when I started again about 10 years ago, I could build on that experience. Nowadays I am the official photographer for a few blues festivals in Switzerland, in particular the Sierre Blues Festival, who had ZZ Top this year. In parallel with my photo activity I am also a blues activist: I’ll speak about that later, but my activities have opened some opportunities at the European level and I meet once a year the best blues European photographers at the European Blues Challenge, which organizes a photo exhibition every year. Some of my work was featured in French magazines such as “Blues Magazine” or “Soul Bag”. I’m particularly proud that one of my photos of Lucky Peterson was chosen for the cover of the album Travelin’Man (2012), because I love this artist.

Are there any memories from gigs, festivals, events and shows which you’d like to share with us?

Coincidentally, I experienced a very moving moment last summer with someone you have recently interviewed: Eric Slim Zahl (& the South West Swingers). Eric was playing at the Sierre Blues Festival (Switzerland) and went down into the audience to play a solo. He stopped in front of a lady, fell down to his knees and played his solo only for her. After the show, Eric was signing some CDs and we were chatting when the lady came to us. Eric doesn’t speak French and the lady didn’t speak English, and I translated the conversation. The lady told us that she had originally not planned to come to the festival, because her husband had passed away very recently, and they enjoyed to attend together. But then she thought the other way round and decided to come to remember her man. With those mixed feelings, she felt that Eric playing his solo only for her was a sign from her late husband. Whatever you may think of that, it put a huge smile on the lady’s face, it’s a very touching story and shows the power that music can sometimes have.

I don’t think I miss anything from the past: whatever was good in the past is still being played one way or the other and many bands are still paying their tribute to the early blues, in an authentic way. Blues is here to stay, there will always be some people somewhere who will gather to listen to the blues. 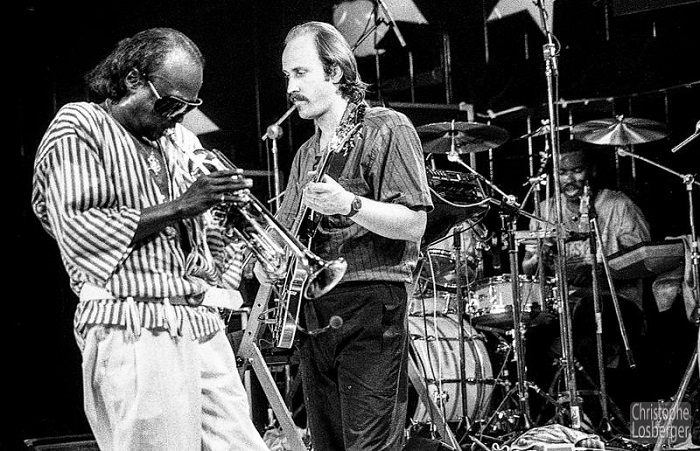 "First of all, I don’t consider myself as an artist, but more as a craftsman. Most of the time I am not really creating anything, I am only trying to capture a particular moment and the emotion in that moment. Everything is already there." (Miles Davis, John Scofield and Vince Wilburn Jr. -Montreux Jazz Festival, 1985. Photo by Christophe Losberger)

There would be too many changes to make in the music to make it better... But on a personal level I would love to see teleportation become a reality and attend any concert, anywhere.

Why do you think that the Blues music continues to generate such a devoted following in Europe?

Blues is authentic and speaks to the heart and the soul. White musicians in Europe, particularly in the UK such as John Mayall, Eric Clapton or the Rolling Stones (just to name a few) were playing the blues in the early 60’s and these musicians are still around and keep the blues alive, one way or the other. This is probably one of the reasons we continue to have many blues bands and blues fans in Europe.

Make an account of the case of the blues in Switzerland. Which is the most interesting period in local blues scene?

In Switzerland we have the Swiss Blues Society, which co-founded by Silvio Caldelari (Sierre Blues Festival), Fabio Lafranchi (Vallemaggia Magic Blues), Rolf Winter (Bluesnews.ch) and myself when I was at the Blues Association of Geneva. The Swiss Blues Society organizes the Swiss Blues Challenge which selects the Swiss bands to represent our country at the International Blues Challenge and the European Blues Challenge. The number of associations and clubs promoting the blues on a local level is also growing, although still remains low. We also have many major blues festivals which have been running for about 20 years such as Lucerne Blues Festival and Basel Blues Festival, and of course the Montreux Jazz Festival, who is over 50 years old now and had all the major bluesmen you can name on stage. More recently many new blues festivals have started (Sierre Blues, Blues Rules Crissier in my region), and those will be celebrating their 10 years very soon. In conclusion the most interesting period is most probably the next 10 years.

What is the impact of Blues, Soul, R&B and Jazz music on the racial, political and socio-cultural implications? Unfortunately, the impact of music on politics is null, otherwise we would probably live in a better world. Music has an impact on people’s personal life, and can probably help them to become better people, more tolerant, more open to differences, but globally I’m not convinced it makes a big change.

"There would be too many changes to make in the music to make it better... But on a personal level I would love to see teleportation become a reality and attend any concert, anywhere."

I would go back to the Montreux Jazz Festival, probably in 1985 to see again BB King jamming with Luther Allison, Johnny Copeland and Robert Cray. But I would need to think twice, because they were many good jams with legends in the 80’s at Montreux.