"Awaking in the morning is always like a dream and everything seem to be interesting to be aware of as the light of day turns into night."

John Van Hamersveld is an illustrator and graphic designer from Los Angeles, California, best known to surfers as the creator of the Day-Glo poster for Bruce Brown’s 1966 crossover hit movie The Endless Summer. After Graduating from the Art Center College of Design in Los Angeles in 1963, Van Hamersveld spent just over a year as the Surfer magazine graphic designer. In the mid-’60s he made handbills for rock acts like the Velvet Underground and the Who, then went on to design album covers for the Stones, Dylan, Bonnie Raitt, and Kiss, among others. 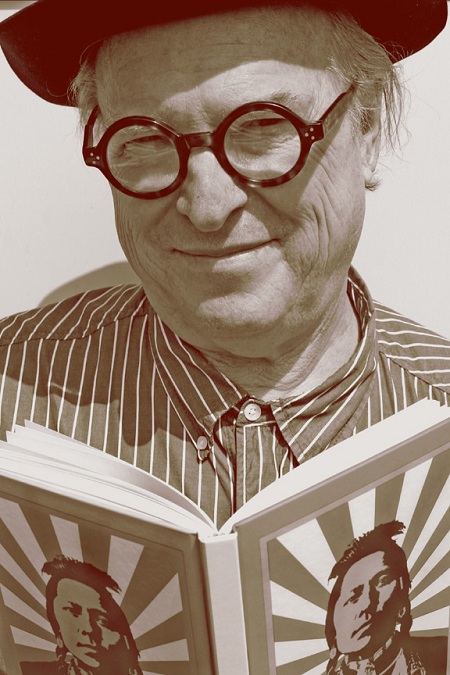 His eclectic designs translate into a multitude of languages by evoking a feeling, a place and a period in time. His highly recognizable and sometimes psychedelic art began with an Endless Summer. He designed the renowned color saturated sunset and surfer poster for the 1966 surfing movie “Endless Summer” from his kitchen table in Dana Point more than five decades ago.

This singular poster may have launched his colorful career; however, John Van Hamersveld is a true renaissance man, who has reinvented himself and his designs to be as relevant and futuristic today as they were in the 60’s. He has been a student, teacher, artist, designer and even created a 360-foot-long mural for the 1984 LA Olympic Games. His treasure chest of retro art reads like a who’s who in the rock world, from famous album covers for the Beatles, Blue Cheer, Jefferson Airplane and the Rolling Stones, to concert posters for Jimi Hendrix, Cream, and Bob Dylan.

John Van Hamersveld is an authentic art legend and his timeless and iconic art will forever connect Orange County as a symbol of youth, devoted surfers, idyllic climate and endless summers.

Q: When was your first desire to become involved in ART culture and what does the "ART" means to you?

A: My Mother had gone to art school in Ohio and starts my interest in Art as a child.

Q: What do you learn about yourself from you’re the ARTS (visual, music etc.) and what has offered you?

A: How to perceived a deeper sense of your normal environment, and a connection to a high sense of the self. 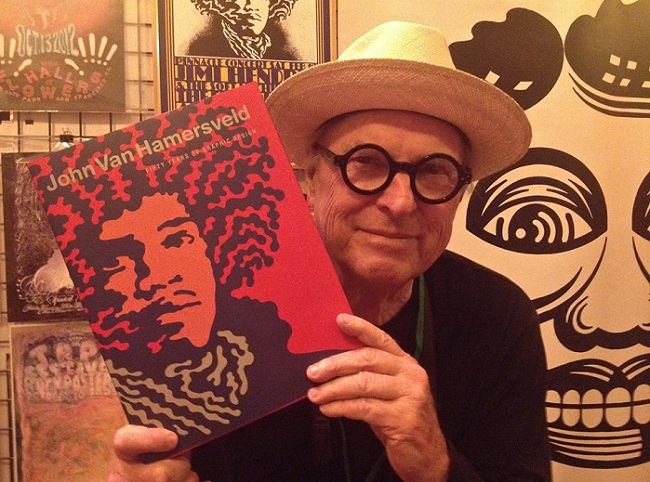 John Van Hamersveld's style is more Ken Kesey than Jack Kerouac, recounting a past as an object of the present, filled with bright images that gladden the heart.

Q: What characterize John van Hamersveld’s work & progress, how do you describe your philosophy?

A: I reflect color, light and form in my abstractions in design of ideas around us usually for a culture.

Q: What experiences in your life have triggered your ideas most frequently?

A: Awaking in the morning is always like a dream and everything seem to be interesting to be aware of as the light of day turns into night.

Q: What is the relation between music and visual art? How important was the music in your life?

A: At one time in art school I found that images came alive when they have a sound track. In my youth with music it was a social communication in my teens and in college life.

Q: How started the idea of famous Blackfoot and Hendrix posters and Jefferson, Deads, Stones and Beatles covers?

A: As I started design education you learned about making cultural symbol to communication words and image as metaphor. So in the sixties the making of image was about translating the words and images into cultural signs.

"I reflect color, light and form in my abstractions in design of ideas around us usually for a culture."

Q: How does the music affect your mood and inspiration?

A: I like classical and electronic music as an escape for focusing within my inner world. I listen to Dylan, and the Stones for other moods I am in.

Q: What has made you laugh lately and what touched (emotionally) you?

Q: Which has been the most interesting period in your life? Which was the best and worst moment of your career?

A: What unfolds in lives illusion is a performance that is endless as good or bad.

Q: What is the best advice ever given you and what advice would you give to the new generation?

A: My psychologist is my mentor, and I advise everyone to have one.

Q: Which meetings and acquaintances of musicians and artists have been the most important experiences for you?

A: Musicians seem closed and artists seem guarded and insecure. The managers and agents were more interested and friendly.

"I like classical and electronic music as an escape for focusing on the inside world. I listen to Dylan, and the Stones for moods I am in."

Q: What do you miss most from the 60s and the endless summer of love? Which memory makes you smile?

A: Surfing for the reasons that it unfolded in a mythical way and is so open ended.

Q: What are the lines that connect the legacy of Acid Art with Pop Art and beyond?

A: It's an area of abstraction where Rick Griffin was. but  art school trainning made me curious. Pop Art was always Andy Warhol, because everyone blamed his for making the movement so different from modernism.

Q: Why did you think that psychedelic art and music continued to generate such a devoted following?

A: The beginning of the era was an amazing experience, but the end was a nightmare. Being a Hippie became a prison. Teens today visit the movement through images in the media. All the album cover are symbols of the culture.

Q: Are there any memories from the famous rock of California which you’d like to share with us? 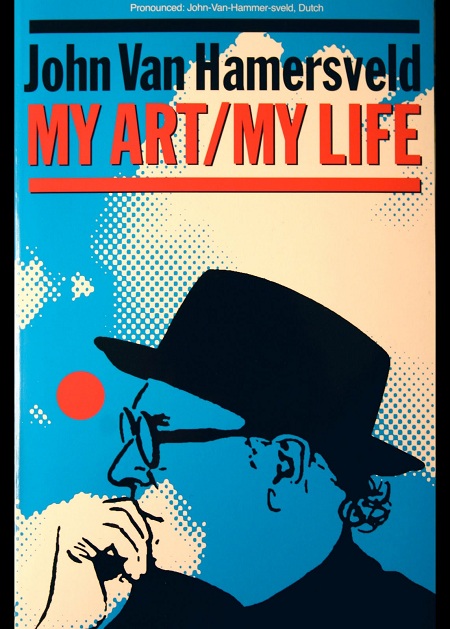 John Van Hamersveld's highly recognizable and sometimes psychedelic art fame began with the renowned color-saturated sunset and surfer Endless Summer poster for the 1966 movie. Inspired by a sunset photo of a beach in Orange County, it was destined to become an internationally recognized icon of Southern California's surfing scene. His works include famous album covers for the Beatles and Rolling Stones, as well as concert posters for Jimi Hendrix and Cream.

Van Hamersveld's journey took him from these sun-drenched beaches to the drug-infused world of Los Angeles, Hollywood, and Laurel Canyon, hotbeds of countercultural activity and attitudes in the 1960s.

After the college campus riots of 1969, it was all about Woodstock - not just an event, a happening, or a concert with 400,000 people, but a pivotal moment of realization for an entire generation and an entire country.

Van Hamersveld was not just a chronicler, but a player and forger of the surf culture that defined a generation and that continues to make an old world young again.

Throughout My Art, My Life, Van Hamersveld recounts his early life as a canvas or archetypal modes that tell the tale of the beginning of an entire Southern California culture that attracted and inspired youth West and East worldwide. His style is more Kesey than Kerouac, recounting a past as an object of the present, filled with bright images that gladden the heart.

Q: What are the reasons to become the artists of 60s a legendary generation that left it mark through the years?

A: I left high school to go to art school and everything followed. 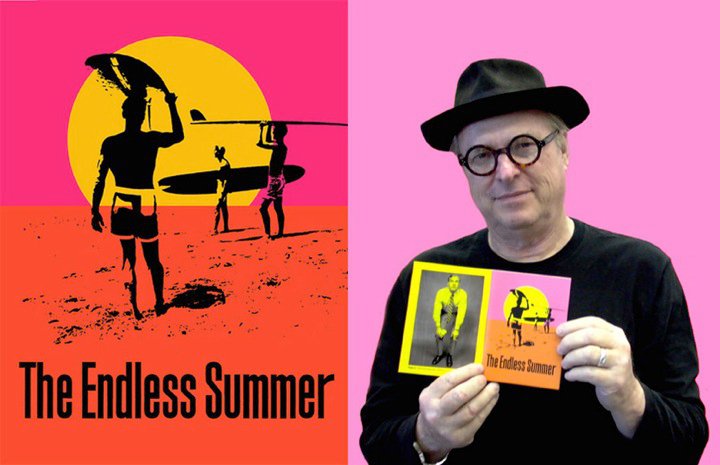 "Musicians seem closed and artists seem guarded and insecure. The managers and agents were more interested and friendly."

Q: What from your memorabilia and things (books, records, photos etc.) you would put in a "capsule on time"?

A: It seems that the Endless Summer Poster is timeless.

Q: Which incident of your life you‘d like to be captured and illustrated in a painting?

A: I stopped painting when I started art school.