“The blues knows no boundaries. It's real. It is no respecter of people’s social status, color, or nationality”

Ted Vaughn: Damn Right We Got The Blues

Ted Vaughn was born and raised in Texas and has been involved in the music scene since the age of twelve. He was heavily influenced by the blues sounds of Lightnin' Hopkins and Howlin' Wolf as well as country artists such as Waylon Jennings. Ted immersed himself in the blues and country music of the region and in doing so, formed a friendship with the late Texas bluesman Willie Willis. He perfected the art of "sneaking back stage" to learn technique and tips on the blues harp from such notable players as Charlie Musselwhite, Sam Meyer, and James Harman. 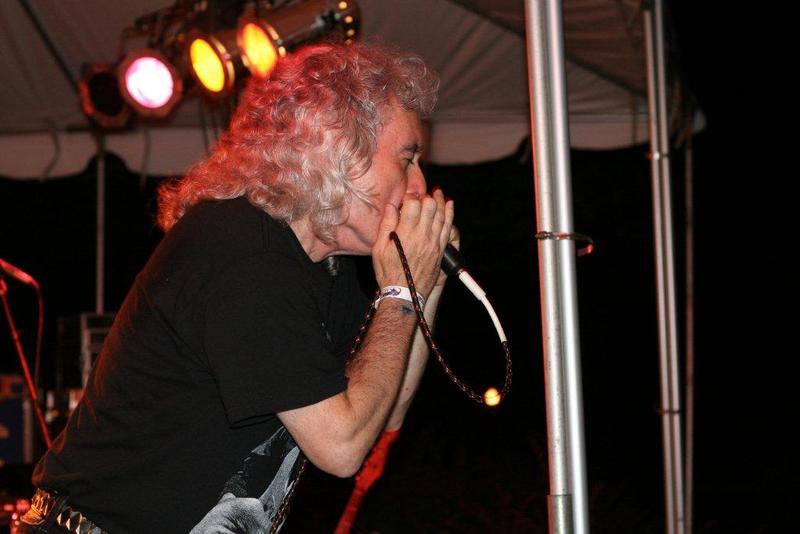 The Ted Vaughn Blues Band consists of five professional musicians with decades of recording and performing experience among them. Individually, the members have shared the stage with some of the top artists in music and have performed at many of the top venues and festivals around the country.

The Ted Vaughn Blues Band has just released their long awaited self titled CD utilizing the production team of Leon-Forrest and Paul Carlsen (Nirvana, Greg Allman, Doors) on Harbinger Northwest Records. The recording has garnered critical acclaim around the world.

I remember music in my home from the time I was very young. My father had records by such artists as Fats Domino and I would sneak them to my room and listen when he was at work... My grandfather was a preacher in Texas so I would sing in the church choirs. Texas is a unique melting pot for music. I listened to country artists, there was also the Hispanic influence and of course Texas bluesmen such as Freddie King, Lightnin' Hopkins etc...As for who I have learned from the most, I am still learning everyday! It is an ongoing process. I do remember clearly, the very first time I heard B.B. Kings version of "The Thrill Is Gone". It changed my life that very minute. I jumped headfirst into the blues and never looked back. ! 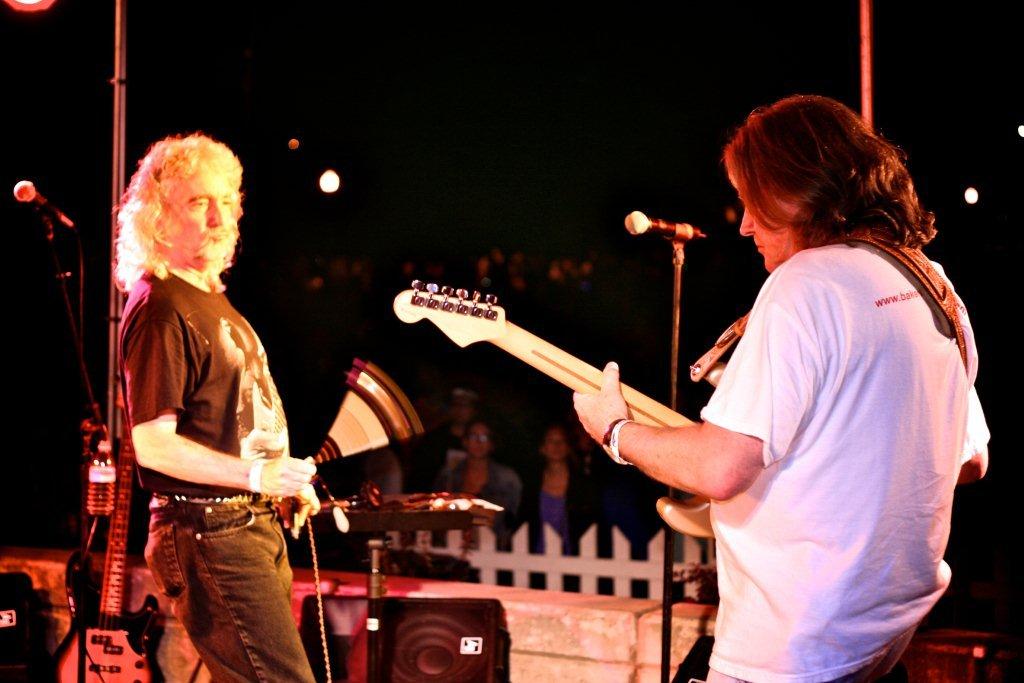 How do you describe Ted Vaughn’s sound and progress?

My good friend and the bands guitarist, Clay "Bone" King, mentioned to me once that my harp playing centered on melodic lines more than standard blues "riffs". I hadn't thought of it that way, but I think that is because of my many years as a horn (trumpet) player. That is just what comes out. I try to play what I feel and hope folks enjoy it.

I believe it was the legendary Brownie McGhee, when asked what is the blues, replied "The Blues is Life." I think people that embrace life and all its challenges definitely have more to write about!

How/where do you get inspiration for your songs & what are some of your favorite blues standards?

I tend to write about experiences in life...both good and bad. The song "Nothin' But Trouble" on the current CD, "The Ted Vaughn Blues Band" is a good example of that. I probably have way too many favorites to list, but a few would be "The Thrill is Gone", Hoochie Coochie Man ...If it is blues, I dig it.

Tell me a few things about Ted Vaughn Blues Band. What characterize the philosophy of band?

The current lineup of band members is the best ever. All of the members understand the blues and its dynamics. We want to play each show like it could be our last and put as much energy as possible out to our fans. 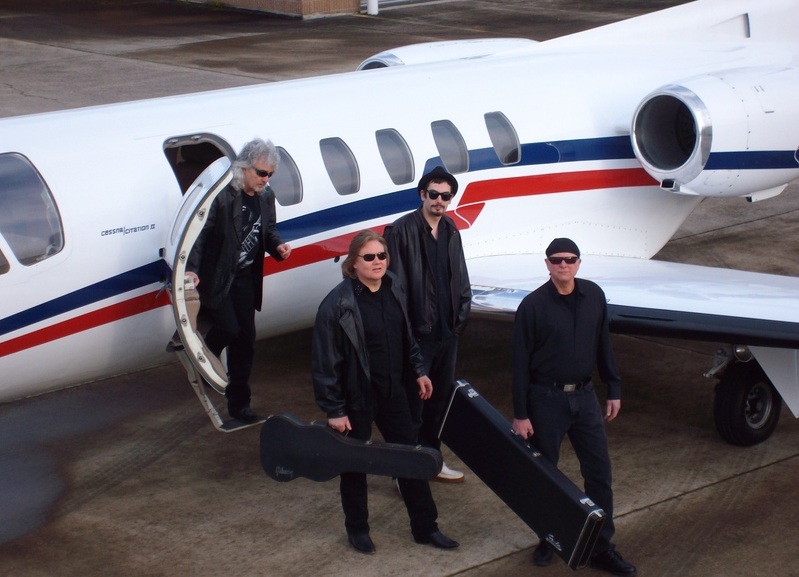 I'll have to refer back to Brownie McGhee again on that. The blues is life...pure and simple. It offers me a way to express feelings, experiences and above all connect with people.

What experiences in your life make you a bluesman?

All of them! Maybe that is why so many of the great blues men are older. It's hard to write and sing about love lost and found, pain and joy, losing and winning, if you haven't experienced any of those things.

Hard to say. There have been some of both. I just try to take both the best and worst moments and write about them.

I love to play in jams. I don't get as much time to do so as I would like. As the band is currently based in Oregon, I really like to jam with some of the great musicians here. One of the finest would be a bass player named John Pounds. He plays a seven string bass and has shared stages with artists from B.B. King to Tom Jones. I really like jammin' with his band whenever possible. As far as memorable gigs, there have been many. Most recently, being able to play with "Big George Brock" at B.B.'s Jazz and Blues Club in St. Louis was fantastic. Big George was a lifelong friend of Muddy Waters and had a huge show for his 80th birthday. It was a great time! 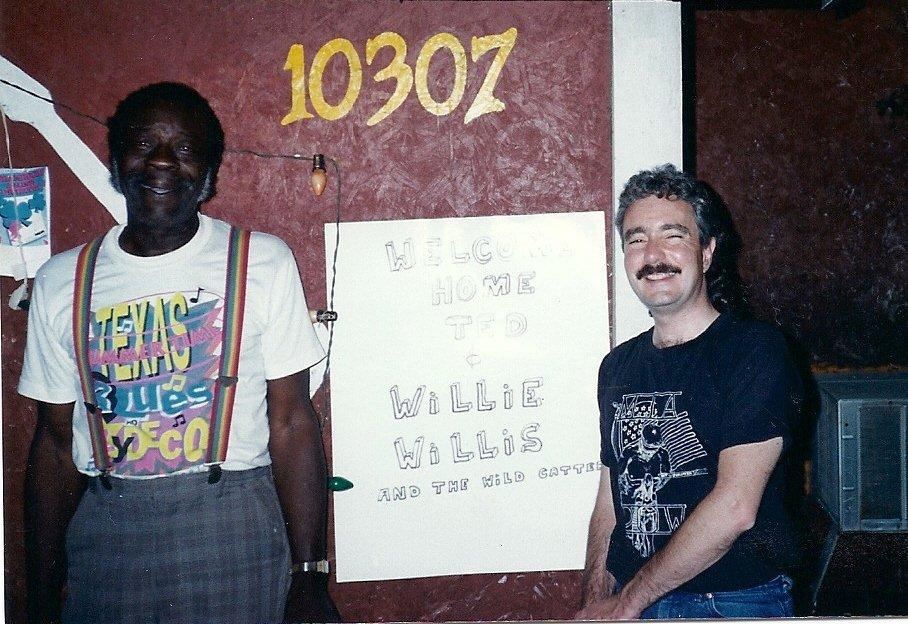 I first met Willie at a place in Dallas called Joe Mac's Whistle Stop. He played there quite often. There will never be another place like The Whistle Stop! Willie passed away many years back and I don't think he ever really got the recognition he deserved at least outside of Texas or the South. He recorded an awesome version of the blues song "Black Nights" that I think is the best I have ever heard. I hate that there are so many great bluesmen like Willie that work in obscurity.

The blues knows no boundaries. It's real. It is no respecter of people’s social status, color, or nationality. I think that is why the blues has lasted and will continue. It is the music of the people.

Do you have any amusing tales to tell of your studies with Charlie Musselwhite, Sam Meyer, and James Harman?

Well, not that I could tell without causin' trouble! LOL. I knew Sam the best from growing up in Texas. He had signed on as the harp player for Anson Funderberg and The Rockets. Most folks might not know that Sam was originally a drummer and appeared on several recordings of Elmore James. I met both James Harman and Charlie Musselwhite while in Arizona. I can say that James is one of the funniest guys I ever met. Real nice guy, too. I haven't seen him in several years. Guess I need to stop in at his next show. 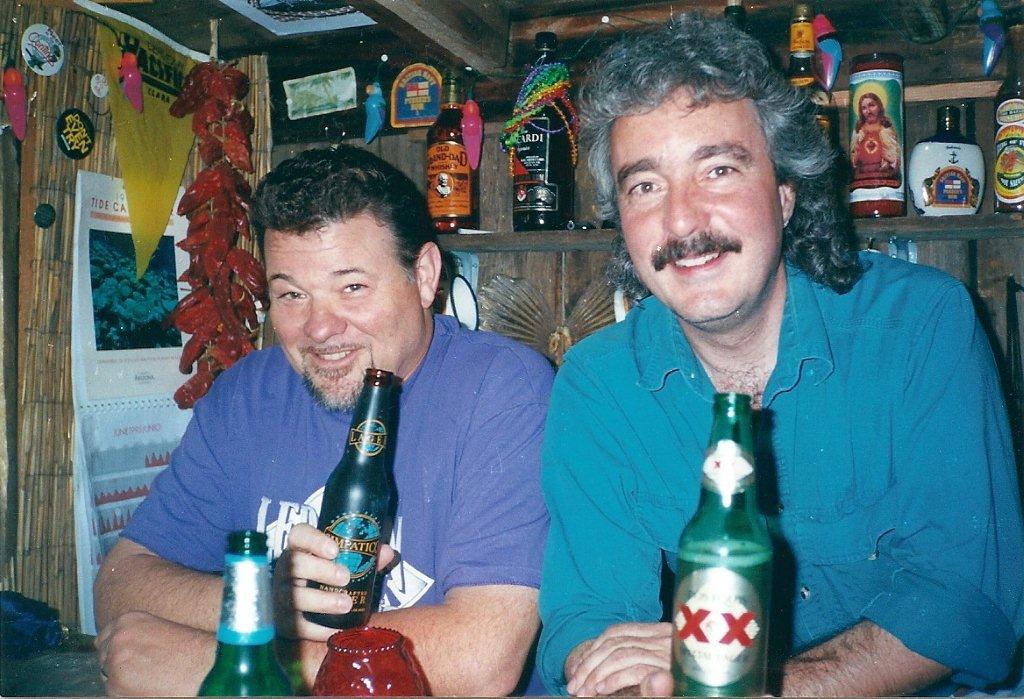 Ted Vaughn and James Harman in Prescott, Arizona circa 1994

I guess the best advice actually came from a country singer. I met Waylon Jennings on several occasions in Dallas and Ft. Worth. I didn't know him real well, but he always remembered me. He told me that a musician should make his own way and create his own sound and not to worry about what the others are doing. He certainly lived that way!

Do you have any amusing tales to tell from recording time with Leon-Forrest and Paul Carlsen on Harbinger Northwest Records?

Well, I don't know about amusing, but I think both of those guys are the best. Leon is our current keyboardist as well as record producer. Paul is in California and is one of the finest recording engineers around. He has a platinum album award for his mastering work on Nirvana's "Nevermind" album and has worked in studio with everyone from Greg Allman to The Doors.

Do you know why the sound of harmonica is connected to the blues?  What are the secrets of Blues harmonica?

I think one reason the harmonica is connected to the blues, besides the historical reasons, is that it is one of the best instruments at mimicking the human voice. The harp can growl, cry, and moan. We all do those things at some point and the harmonica resonates with that. As for the secrets? Just practice and put all the emotion you can into it. The harmonica will help you express your feelings like no other. 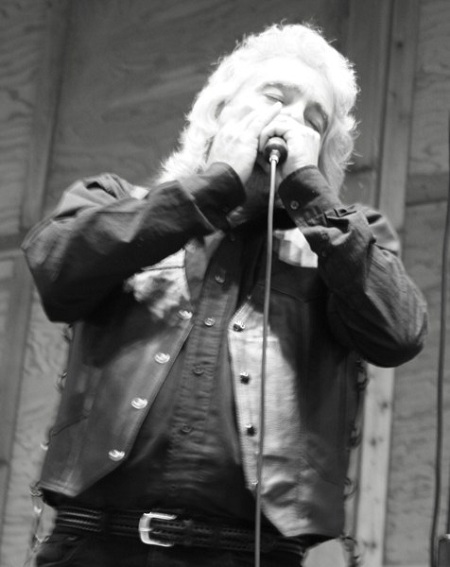 Currently I use a Shaker dynamic microphone made in Arkansas. I like the sound and it is a lot tougher than most of the other mics I have used. I use a variety of harps but I endorse and really like the Bushman Delta Frost. They were hard to get for a while due to supply problems, but they are back on the market now.

Texas style blues has more of a "swing" element to it I believe, and like the state of Texas itself, has many influences and "flavors"

The most interesting period probably depends on who you talk to. I think the late 60's and 1970's were great periods in Texas. Freddie King was tearin' the place up! I was also glad when the city of Dallas started rebuilding the "Deep Ellum" area in the 80's.  There is a lot of blues history in that area.

I guess I am sorry to see so many of the old places fall away and get replaced with what seems to be just "mass produced" nightclubs. It's too bad that more of the younger folks won't get to hear the blues in the places it was born.

Thankfully, there are still a few of the good "Juke Joints" around. If you ever make it out this way, I'll show you right where they are!