Q & A with guitarist Mike Crownover of No Refund Band: It's not only our name, it's also our policy

"Blues is a confession of the soul it is almost like religion, so my hope is that the religion, which is the Blues, never dies."

If you would like to know what a mixture of Stevie Ray Vaughn, BB King, and Grand Funk Railroad sound like, listen to The No Refund Band and you will get taste of all of these styles mixed into a genre all its own. The No Refund Band was formed by Mike Crownover in 2007 as the fulfillment of lifelong dream of playing guitar in his own band. As with any new project, the band had a few early successes, but there were many bumps on the road as well including finding steady musicians, the right lead singer, the right gigs, etc… However, Crownover’s passion for music and for finding the right sound kept the band moving forward. While rolling over one of the bumps in the road, Crownover met Ricky Jackson and Rik Robertson who he hired to fill in for a gig in Ft. Worth, Texas. It didn’t take long for the partnership to gel into something more permanent as the trio found common ground in their musical interests. Jackson would become the front man, with a soulful voice and penetrating guitar licks. Robertson, a studio musician provided the anchor to the band with his innovative bass lines. Both compliment the rock solid rhythms from Crownover. With a horn section featuring Anthony Terry and Jim Brady, the result is a versatile band that can deliver everything from hard driving blues to melodic acoustic tunes that leave you wanting more. The new release “Current State of Blue" (2014) is the second album from the self-titled debut "No Refund Band (NRB)", a follow-up to the critically acclaimed self-titled first. This recording reflects a natural progression for the band, filling with 9 originals and the cultivation of the NRB sound.

While I grew up with Classic Rock I've always liked the blues. The Allman Brothers are my biggest influence and their "Live at Fillmore East" is my all-time favorite album.

How do you characterize No Refund Band’s progress and sound?

We feel good about it. This version of NRB is only few years old, but our sound was there from the first gig. We have a lot more to say.

Are there any memories from Current State Of Blue sessions which you’d like to share with us?

Because there are more originals on this CD than our first one, we exercised a lot more creativity in the recording of this CD. While we had done demos on most of the songs, however two of the originals really came together in the studio, those being “I Gotta Play” and “St. Louis Bound”. We had the lyrics and somewhat of a melody for each, but the songs were actually finished in the studio. 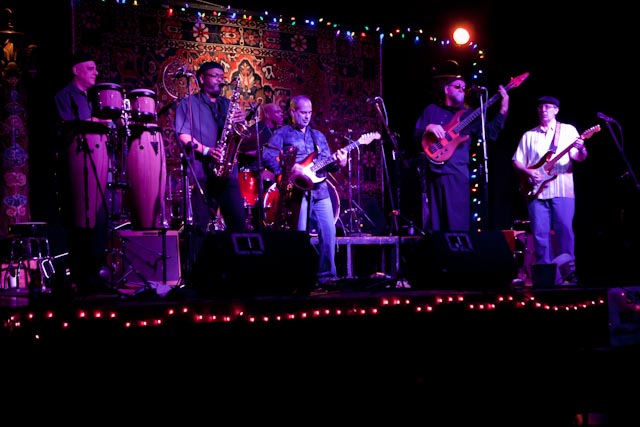 "Blues is a confession of the soul it is almost like religion, so my hope is that the religion, which is the Blues, never dies." (Photo: No Refund Band on stage)

Tell me about the beginning of No Refund Band. How did you choose the name and where did it start?

The name came about 9 years ago, when the band was formed I (Mike), and the band members at the time were trying to come up with a name. I was thinking about the names of acts that were based on money, e.g., Fifty Cent, Nickelback, etc... And I thought of No Refund. I suggested it to the other guys and no one really liked it, but they didn't suggest anything else. So we scheduled a rehearsal and the bass player referred to it in an email as the No Refund rehearsal. So it stuck for lack of another name. Our original T-shirt had the quote on the back that said, "It's not only our name, it's also our policy".

How do you describe your No Refund Band's sound?

We create music. The result of our influences, lyrics, mood and abilities create our sound. We love the blues, but we like other genres as well, so you will hear a variety of sounds from us, with the predominant style being blues.

We actually inspire each other. The songs we have written together were all a product of sitting around bouncing ideas off each other. For example, we had a song writing weekend on Galveston Island in TX. Ricky and Rik were already there and I text them to find out where to meet them. Ricky text back with their location and then.... got whiskey. This was to let me know that I didn't need to but any for the weekend, but as I read it, I said to myself, that's a song that needs to be written. So that weekend we wrote "Got Whiskey". We wrote. "Top Side", while we were recording the CD, just sitting around bouncing ideas off each other.

Ricky Jackson has a strong catalog of songs that he has written over the years, we will continue to bring some of those to the table as well. 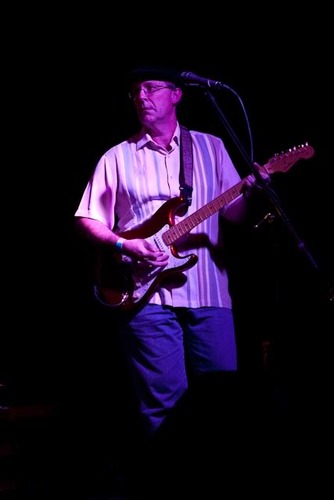 There is nothing better than performing on stage. We measure our connection with the audience by the size of the crowd when the show is finished. Not many people leave a NRB show.

"We create music. The result of our influences, lyrics, mood and abilities create our sound. We love the blues, but we like other genres as well, so you will hear a variety of sounds from us, with the predominant style being blues."

Tough question, as a band we have only been together for two years, but musically there have been shows when you can't find the right tone, the sound is bad or some similar distraction that ruins the gig for you. So far, the project that resulted in the NRB CD is the highlight.

There was an encounter with a snake while writing Got Whiskey that ended poorly for the snake. The poor snake was pummeled to death with a Nerf Rocket and was given the name Mr. Slithers posthumously. You had to be there, we laughed till we cried.

Under pressure to write one more song, we wrote Top Side and are quite proud of ourselves for performing under pressure.

Make an account for current realities of the case of the blues in Texas?

Every one loves the blues, but its hard to find real blues venues. Texas Blues is almost its own genre, and we intend to contribute to the scene.

From the musical point of view are there any differences between Texas and other local scenes?

Texas is dominated by the Texas Music (country) scene. They have their own charts, with the #1 spot usually getting 1,400 spins a week just in Texas. So finding venues that are dedicated to blues is tough. 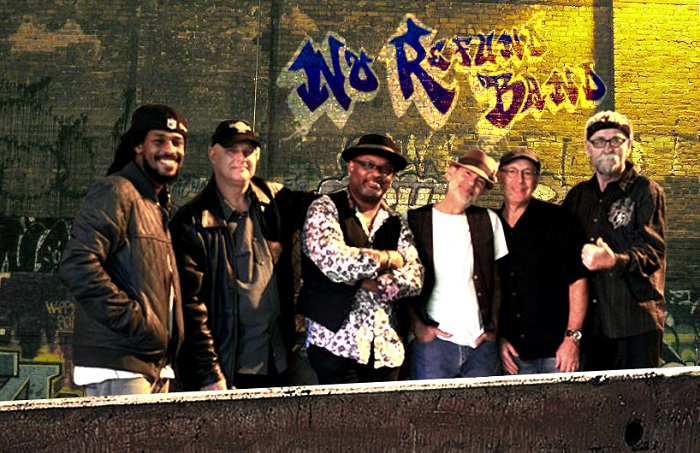 "The blues is a way to express the human condition. When you are down about something or sad, if feels good to tell it to others and get comfort that you aren't the only one who feels that way. It's sort of like a confession of the soul."

Because Blues is a confession of the soul it is almost like religion, so my hope is that the religion, which is the Blues, never dies.

The blues is a way to express the human condition. When you are down about something or sad, if feels good to tell it to others and get comfort that you aren't the only one who feels that way. It's sort of like a confession of the soul.

Actually there is no need to miss the blues of the past. The music is always at our fingertips. If you look at the Blues Chart for iTunes, I think Etta James is still #1, so actually the old Blues are still around.

I believe that Blues music is truly universal; Rock, Country and Soul music fans all like the Blues, so my hope is that continues, however, because it’s so tough to make a living for many in the blues genre, my fear is that creative artists and musicians might abandon the genre for more populist styles of music. That the economic model for bands would, once again, allow for artists to be fairly paid. With all of the digital methods of copying and listening to music for free the financial return for making music is significantly less that it was 30 years ago. Music fans should support their favorite bands by buying their music, attending concerts, etc…. because if you don’t those artists will not be able to continue making Blues music.

With the No Refund Band, we laugh all the time, it’s one of the things that keeps us together as a band, the ability to enjoy what we are doing. But others make us laugh as well, there is always someone in the crowd who thinks they can dance or play air guitar. Three young attractive girls were dancing together and this older guy walks up and starts dancing with them. When the song finished, Ricky asks the crowd, “Who doesn’t belong in this picture”. It’s always entertaining to watch them and usually the later it is, the more entertaining their performance.

One of the venues we play is frequented by a former US Marine who lost his legs in the war. However, it doesn’t slow him down. He comes to the club, plays pool, and listens to our music and has a good time. We are honored by his presence and touched by his sacrifice.

I would want to go back to the day the Allman Brothers played Fillmore East and recorded their iconic live album. I would want to sit on the front row and just watch Duane Allman play guitar. 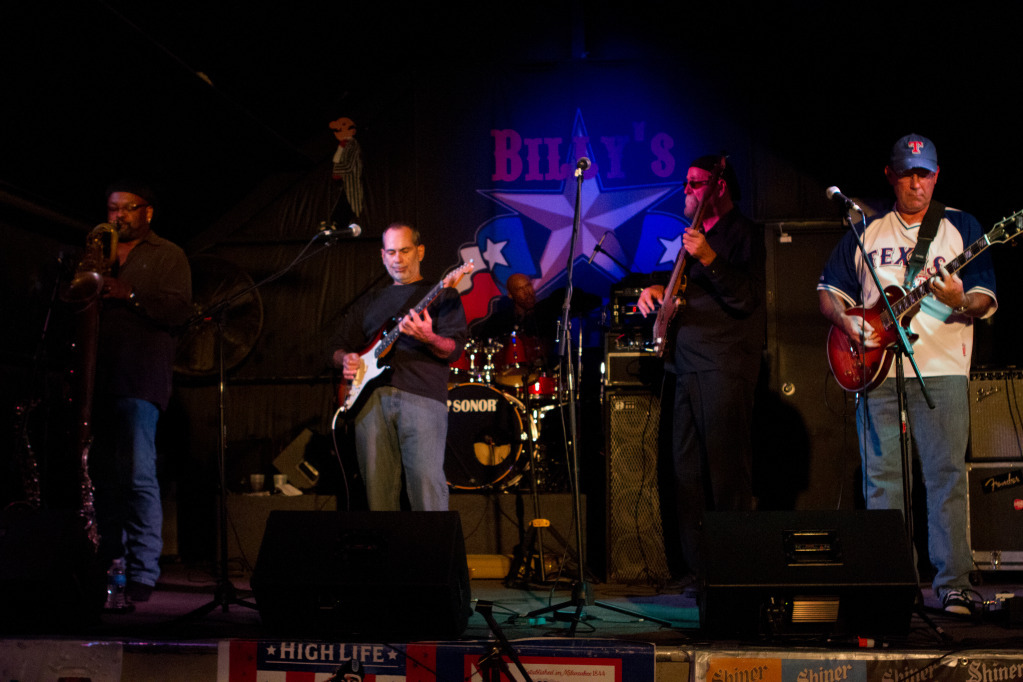