"Trojan Records touched me in many ways ... mostly in that it instilled a long and fortunately very lasting appreciation for Jamaican music and culture. That the music from that era continues to excite and inspire is because it is culturally and musically valid, good tunes, well played with feeling and originality by good musicians."

Bob Bell: One World, One Love, One Music

Bob Bell was born in London, England in 1946, bought Bill Haley’s ‘Rock Around the Clock’ in 1955, and soon progressed to Little Richard, Fats Domino, Chuck Berry, and Joe Turner. His first job was with Island Records in 1965, progressing from supervising the company’s distribution to eventually running the company’s subsidiary, Trojan Records, then the world’s largest Reggae label. When Island sold Trojan in 1971, he worked in Island’s international office, developing acts in Europe. Finding the company’s musical direction running counter to his rootsier taste, he left to live and work on a 500 acre hill farm /commune in the west of England until 1979, when he returned to Island to supervise organization of the company’s archives. He visited the States in 1980 for a vacation, ran into Roomful of Blues in Atlanta, Georgia that spring, and was knocked out to find a band that not only played the music that he loved, but did it with taste, feeling and finesse. 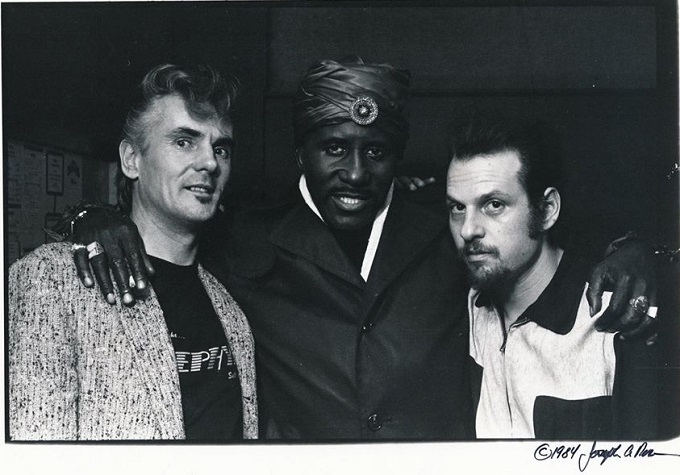 After negotiating European releases for the band’s then current album, he joined the organization as publicist, driver, soundman and manager. Since that date, he has watched the band garner all manner of awards, including numerous Handy and GRAMMY nominations, release over a dozen critically acclaimed albums, and become a world class touring attraction. It has been, he says, the best, and certainly the longest, vacation of his life!

How has the Blues and Reggae Counterculture influenced your views of the world and the journeys you’ve taken?

I'm not sure I can separate myself from what you term "the Blues and Reggae Counterculture" - I'm not even sure what that means. I've always loved music and thus music has determined what journeys I have taken. I mean I would not have come to the USA were it not for the fact that blues originated over here. That was the biggest reason for my coming to this country originally. Blues and R&B were the reasons for my applying for a job at Island Records back in 1965, when I left college. I didn't know about ska and Jamaican music then, but soon learnt, and learnt to love it very much! I found a lot of similarities between the two musics, both culturally and in how the businesses evolved. Did I learn and apply actual philosophy from the music as your question implies? I dunno - Little Richard's 'Rip It Up' probably expresses some of what I might have absorbed, but that is just one very small aspect, one minor facet of the diamond of life. Music has been my life, and thus it has influenced me as much as air has.

What characterized Roomful of Blues music philosophy? What was the hardest part as manager of the band?

Good musicianship, a real feeling, love and deep appreciation for the various styles, knowing when not to play, and enjoying it. Probably the same as most good musicians. The hardest part of managing the band was getting enough sleep.

Best advice I ever got was from Leslie Perrin, whom I spoke to in 1965 when I was trying to figure out what kind of path to follow in the music business. Before I had a job. My father arranged the interview through his bank manager. I didn't really know who Perrin was - turned out he was the publicist for the Rolling Stones among other artists. He advised me to go into music publishing. I ignored him, and called Island Records, immediately after the interview, to see if they had any jobs going, and they did. Publishing has always been where the money has been in the music business. It was great advice. So I guess that was one meeting. The one right after it - the same day - with David Betteridge at Island Records was obviously another, as was my meeting with Roomful of Blues in 1980 in Atlanta, Georgia. And of course, meeting with my wives, which resulted in the births of my wonderful children. And meeting Britt, my current, present and always to be wife. It's interesting, meetings can be planned or unplanned - did you see the movie 'Sliding Doors'? Everything is, in the end, decided by chance .... Are there any memories from gigs, on the road, tours and studio sessions which you’d like to share with us?

Oh God, you're asking me to write a book here. Many are unforgettable, many I wish I could forget. I've been writing bits of a memoir, hopefully to be combined - in the near future, into some vast Proustian tome - that can be read on the website of my dear old friend, the writer Martin Hesp (Martin Hesp Food and Travel).

The road stories, like the road, are endless. Many quite unprintable. Some gigs are etched in my memory, like playing in Houston and having Grady Gaines sit in. He led Little Richard's road band The Upsetters, in '50s, and we became very good friends. In the same town one night we had Albert Collins, Koko Taylor and Eddie 'Cleanhead' Vinson sit in. Working and recording with Big Joe Turner and Cleanhead was a gas, as was doing the same with Earl King. The amount of people that Roomful worked with over the years is incredible. Red Prysock, Sil Austin, Helen Humes, Jay McShann, Count Basie - I recall rooming with Greg Piccolo in Atlanta one time, and the phone rang on a Sunday morning and Greg answered it, speaking for a long time, and then put the phone down, turning to me and said, That was Basie - he played in town last night and heard we were here'. Luther Allison, The Fabulous Thunderbirds, Robert Cray, Los Lobos, Jimmy McCracklin, The Paladins, Luther Johnson, Stevie Ray Vaughan, Linda Hayes, Johnny Littlejohn, Eric Clapton, Carlos Santana, Boz Scaggs, Huey Lewis ...really, the list is endless. And then of course was the great and intense pleasure of knowing, hearing and working such great Jamaican acts such as Desmond Dekker, Bob and Marcia, The Pioneers, The Rudies, Dandy Livingstone, Danny Ray, Count Prince Miller and all those pivotal players. Meeting knowing folk like Guy Stevens, the man who got Chuck Berry out of jail in the early sixties, Sonny Roberts, the pioneering black producer and record company owner in the UK. There have been so many of them ... It's all a mad kaleidoscope of talented and special people ... life has been a lot of fun and it ain't over yet!

Well, I try not to live in the past, but I do admit to preferring the music of the first six decades of the twentieth century more than I do of what I hear today. Simplicity, space and swing are some of my favorite things! For the future, I just hope that we can rapidly find a vaccine and a way out of this current Covid-19 nightmare ... musicians need places to play and audience to play to. Right now, the business is completely destroyed. Things have not been great for working and touring musicians since the advent of file-sharing - now things are dire. 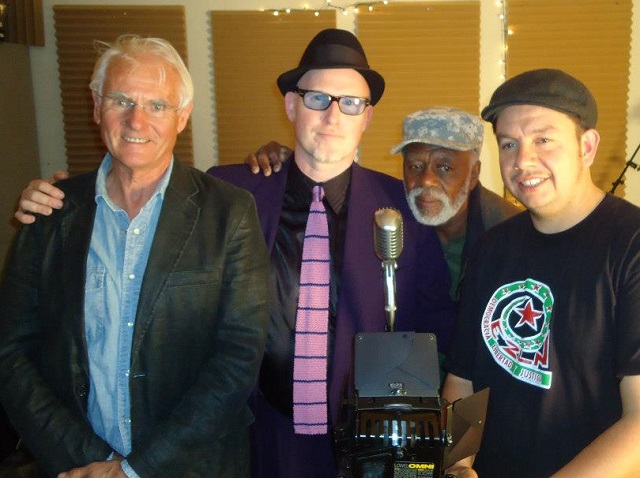 "I've always loved music and thus music has determined what journeys I have taken. I mean I would not have come to the USA were it not for the fact that blues originated over here. That was the biggest reason for my coming to this country originally." (Photo: Bob Bell, Rusty Zinn, Hux and Frank Sosa)

I'm not very good at playing God. I'd like to see a lot more clubs be financially viable. I wish my friend and neighbor Hux Brown had not unexpectedly died a couple of weeks ago. Hard to focus on just one thing and wish it away, or into being. What I might not like about something in music may well be the one thing that someone else does like. Who am I to impose my vision?

What has touched you from the Trojan? Why do you think that continues to generate such a devoted following?

Trojan Records touched me in many ways ... mostly in that it instilled a long and fortunately very lasting appreciation for Jamaican music and culture. That the music from that era continues to excite and inspire is because it is culturally and musically valid, good tunes, well played with feeling and originality by good musicians. I was talking to someone the other day, about Island / Trojan, and the fact that many of the Island pop / rock acts that sold millions, are now largely forgotten yet the reggae guys that sold in the thousands are remembered. My friend said, 'Well, the pop / rock stuff was that - Pop', and he was right. The reggae shit is culturally enduring, it really doesn't date in the way that pop does.

Be honest, be cheerful, speak the truth and get some sleep.

Oh Lord, this is beyond my pay scale. Hopefully it makes you smile, dance, think or weep. Hopefully it has an effect one way or another.

Probably Cosmo's studio in New Orleans, for a Little Richard, Fats Domino or Smiley Lewis session back in the mid-fifties. Cosimo Matassa engineered most of that great stuff that came out of New Orleans during the fifties and early sixties. When history was being made, with groaning saxes and a delicious backbeat. 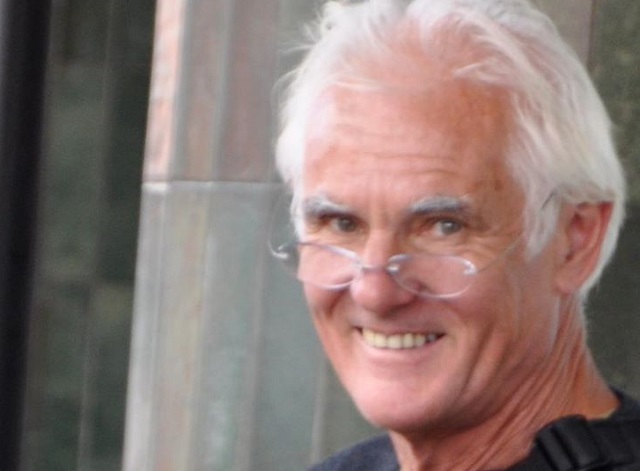