"There are similarities between the Native Americans and the Blues artists. Both races had similar obstacles to overcome to try and assimilate into the American culture. Each race had to fight prejudices, racism and segregation."

Satch has had a long career as an award winning graphic designer, illustrator and creative director in New Jersey before moving to Gardiner, New York in 1997.  For the past 20 years, he has painted in his spare time, primarily wildlife and landscapes of the pristine mountains of Pennsylvania and New York State, the quaint seaside towns of Massachusetts and the sleepy, rugged villages of Nova Scotia. 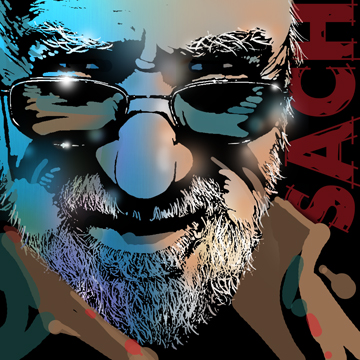 In 2006, he retired and devoted his life full time to his art.  In that time he has created a series of paintings entitled Blues Legends, Early Native Americans and Native American Landscapes. His paintings and prints have been sold worldwide and are in numerous private collections.

Art is not merely a pretty picture. It is the soul of the artist, his passion. It is this passion that "Satch" tries to communicate with the viewer, of that special sense of place and time. He hopes that his work will touch a place in the mind and heart of the viewer, that a passion is aroused, a sense of awareness is stirred, and ultimately, that the viewer experiences the emotions that went into producing each painting. Paul talks about the Blues legends, nowaydays Blues scene, Frank Stokes, Native Americans, and his projects.

When was your first desire to become involved in the ART? What characterize Sachtleben’s work & progress?

I always drew and painted growing up, loved cartooning and against my mother’s wish of becoming a doctor, followed my dream to be an artist. I don’t think that my work can be characterized or categorized. Through the years my subject matter, technique and media have been varied and I like to experiment and constantly try new things. Years ago someone once told me that I don’t stick to any one subject matter to which I replied, “I paint whatever I am passionate about.”

What does “Art” and “Blues” offered you? What do you learn about yourself from the colors and the blues?

Working on the Blues Legends gallery, I read and studied the history of Blues from many sources, read dozens of biographies of artists, listened to hours and hours of music and basically absorbed as much as I could to try and get to the heart of Blues. I have come away with a better understanding of the life and times, the hardships endured, the sacrifices, struggles and ups and downs of these early Blues artists. I have gotten a new respect for these men and women and they have certainly been an inspiration to me. "I have come away with a better understanding of the life and times, the hardships endured, the sacrifices, struggles and ups and downs of these early Blues artists." Son Thomas © Paul Sachtleben

What first attracted you to the Blues and how has the blues music changed your life?

I grew up with rock and roll in my youth not realizing that the music was influenced by Blues decades earlier. When I was older I found some old 78s Blues records and I was hooked. I became inspired to painting Blues artists’ portraits not only for the love of the music but also because of the colorful lives that they each have lived which, I believe, shows in their faces. Each face tells its own story, some sadness, some weary, some a life well lived but all show a sense of pride in their craft and of their perseverance to overcome all odds.

Blues is a truly American form of music that began in the Deep South by slaves and sharecroppers and eventually crossed over to the white population. It has influenced musicians and artists throughout the years and has evolved into Folk, Jazz, Country, Rhythm and Blues and Rock and Roll. Basically, all of today’s music genres are derivatives of early Blues music. There will always be Blues in one form or another.

I think that the most rewarding moments have come when I receive emails from great-grandchildren and great-great-grandchildren of Blues legends or Native American Chiefs whose portraits I have done thanking me for honoring their ancestors. They get what its all about. There can be no more satisfying feeling than that. 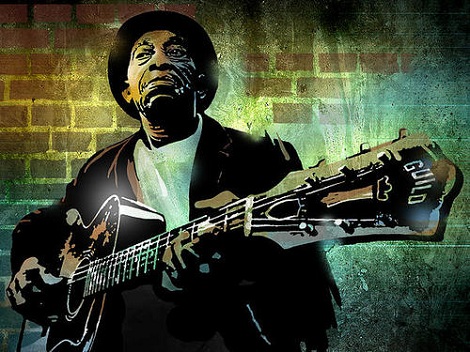 I am constantly learning new things not only about art but Blues. One of the things that I wasn’t aware of is that Blues isn’t all about heartbreak and sadness. Although many songs are soulful and melancholy, the music as a whole celebrated the life of Black Americans, reflecting their daily lives.     Mississippi John Hurt © Paul Sachtleben

How does the blues music come out of your art? What kind of music you hear when you are on progress?

Music is very important in my creative process. I immerse myself in the music of the Blues Legend I am painting and I listen to only his (or her) music. Likewise, I listen to Native American flute music and chants when I paint one of their portraits. Its sounds strange but its as though the music flows through me into my art. One cannot feel closer to the soul of a subject than through his or her music. After all, that is where it originated in them.

Inspiration can come from many places. It usually could be as simple as hearing a song on the radio, possibly moved by the lyrics or even just the song title. One song that comes to mind immediately is “I’m in an Awful Mood” by T-Bone Walker.  I’ve had many days in my life that I certainly have been there.  Another song that seems to be on the opposite side of the spectrum is “Cakewalk Into Town” by Taj Mahal.  Great song for celebrating life.

I don’t like to smile unless I really have to. But I do get a small grin (inside) when people viewing my work praise me. I think that my work is ok, is something that I enjoy doing and feel rewarded when a finished painting meets my expectations, but I’m kind of blown away with the extent that some people actually like them and will actually buy them. One of the Blues Legends that I had a difficult time doing was Frank Stokes. There wasn’t a lot of images of him available and I had trouble depicting him in an appropriate style that I was happy with.  I eventually painted him in sepia tones, looking yellowed and aged with time. Coincidently, I was approached and that image appeared in last year’s 33rd Blues Music Awards Program where Frank Stokes was inducted into the 2012 Blues Hall of Fame in Memphis.        Frank Stokes © Paul Sachtleben

I like to research an artist’s bio and to find out as much as I can about their music before I begin a painting to better understand that person. That is of the utmost importance.

What is your painting DREAM?  Which of historical blues personalities would you like to meet and drew?

I try to communicate with the viewer the passion that I feel about the subject. If that passion is aroused, a sense of awareness is stirred, questions are raised and ultimately that viewer experiences those emotions, that is the greatest reward and I guess you could call that a dream fulfilled. There is something very special when someone responds to my work. That sharing is the ultimate achievement of an artist.

Absolutely. Music has evolved through the decades. The early Blues artists laid the ground work that will always remain and will be enjoyed and appreciated. However, there will always be “new cats” who add their own distinctive touch, ideas and style. That is the evolution of music. That is why I felt compelled to include some of the newer “Legend” contemporaries like Eric Clapton, Bonnie Raitt and Keith Richards in my gallery. There are some artists today that in time will be classified as legends.

How you would spend a day with Howlin Wolf? What would you like to ask Janis, Ma Rainey, and Son Thomas?

I don’t think that I would actually say a single word after first asking each of them to tell me about their lives.  Just sit back and take it all in. 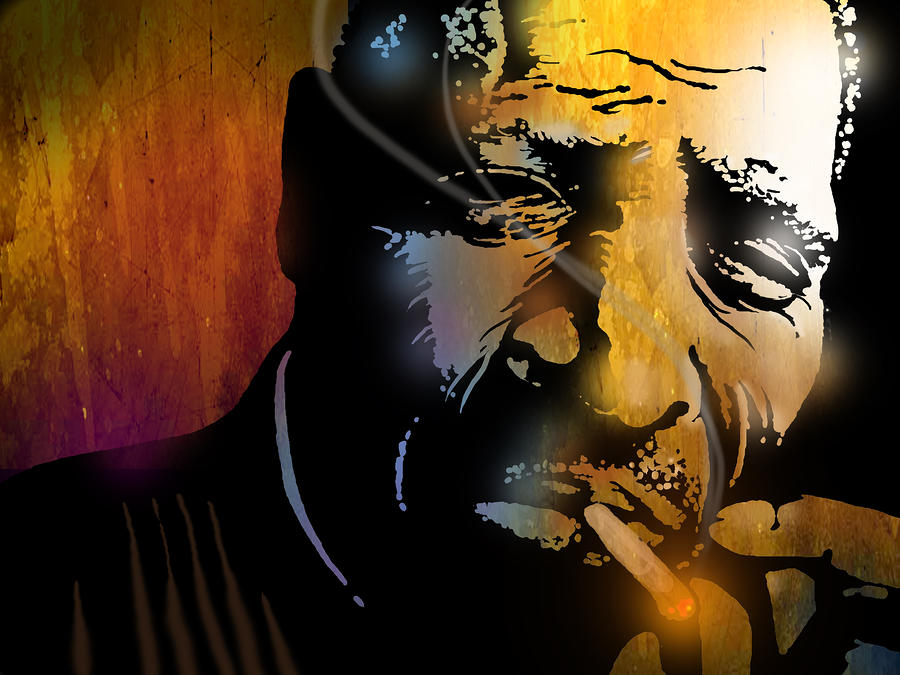 "Music and art have always related to each other. Life is art.  Blues gets its earthy, raw power from life. And Blues inspires art - musical artists as well as visual artists." Howlin Wolf © P. Sachtleben

I was always aware of the plight of the Native Americans, but it wasn’t until I volunteered my services to promote an upcoming Pow Wow in Stephentown, New York in 2009 that I started reading and learning more. Invited to that Pow Wow as a guest, I was intrigued by their spiritual culture and music and eventually found myself painting portraits of these fascinating people.  ( I  also learned that they do not prefer the name “Indians.” That is a name they say was given to them by the white man. )

There are similarities between the Native Americans and the Blues artists. Both races had similar obstacles to overcome to try and assimilate into the American culture. Each race had to fight prejudices, racism and segregation. But there also was the determination and strength of these people to push on. My portraits reflect my reverence and respect for these people. I try to capture the emotions and spirit of these “pioneers.” Their stoic expressions inspire me, telling stories of sadness, anger, perseverance and loss, as well as a strong sense of pride. I try to capture that inspiration.

What is the line that connects the legacy of Blues culture with the art? What is the relation between music and visual art?

I believe that everything comes full circle. Music and art have always related to each other.  Life is art.  Blues gets its earthy, raw power from life.  And Blues inspires art - musical artists as well as visual artists. 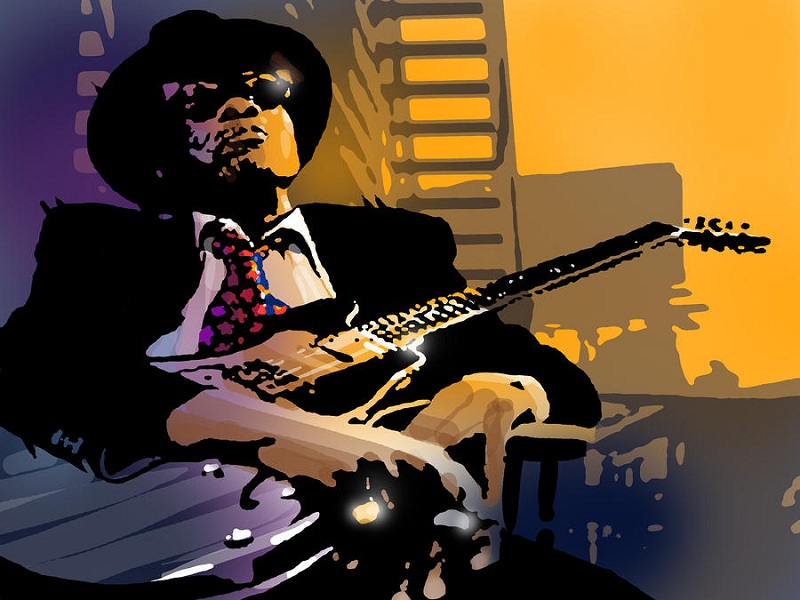